Norman Abjorensen previews Liberal Rule, the “best effort yet at coming to grips with these extraordinary years”

Peter Reith and John Howard, with Peter Costello looking on, during question time in the House of Representatives on 25 September 2001. Alan Porritt/AAP Image 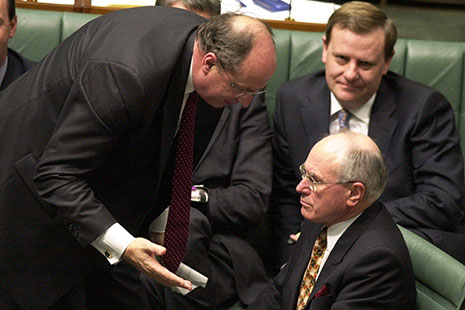 Peter Reith and John Howard, with Peter Costello looking on, during question time in the House of Representatives on 25 September 2001. Alan Porritt/AAP Image

FOR MORE than a decade Australians played a mostly unwitting role in serving the driving ambitions of one man – John Winston Howard. He had planned, plotted and connived to get to the top, fighting on when most others would have withdrawn from the battle, wounded, humiliated and defeated. But not our John, a political warrior of almost superhuman resilience and tenacity; someone who changed the Liberal Party, the way we think about who we are and the very nation itself. Yet how well do we know the man who presided over our national destiny for eleven years, lectured and exhorted us frequently and was a nightly visitor in the nation’s living room?

Getting a fix on Howard is not easy. Even the useful biography by Peter van Onselen and Wayne Errington had difficulty in locating the man as distinct from the politician. (And of course this may well be all there is, a Musil-like character of existential incompleteness.)

But we might be inching a little closer, and Liberal Rule: The Politics that Changed Australia, an engrossing series to be shown on SBS later this month, offers the first detailed retrospective of Howard and his times. Howard the man still eludes us, but we start to see the extent to which we all played a part in his ambitions. And what ambitions they were: first, he changed his party into something resembling his own likeness (which is the prerogative of every Liberal leader), then he began shaping his government the same way, and finally it was our turn. There was seemingly no end to it – until the 2007 election, that is.

The series works engagingly on several levels at once. At the most basic and accessible level, it is a thoughtfully crafted political documentary that goes beyond mere narrative, and seeks to enter the minds of the key players, skilfully probing their motives. On another but less obvious level it poses complex and disturbing questions about the nature of Australian conservatism and the very legitimacy of the tradition represented by Howard and its tensions with a more traditional egalitarian view of national identity.

It also offers some remarkable insights into key figures in the Howard government, and the almost frightening extent to which they subjugated themselves entirely to Howard and his own peculiar small dream of suburban Australia. And here there was an uncomfortable evocation of the Nixon White House and its festering resentments, with Peter Reith playing a passable Chuck Colson impersonation. It was watching this that made me think what it is about Howard that provokes such antipathy in many of us, and it is this: Howard is the resentful reactionary that we all seek to overcome in ourselves.

Remember Future Directions, the policy document from his first incarnation as Liberal leader back in the 1980s? On its cover a blonde wife and her nuclear family smile contentedly behind a white picket fence, insouciantly blissful in a world in which couples lived happily for ever after, Aborigines did not make demands and there were no such things as homosexuals. It was not only a throwback to the 1950s in a corny sitcom sort of way (Leave it to Beaver, perhaps?), it was a dishonest reference to a world that never existed, a conservative fantasy where there was no conflict, no poverty and certainly no politics.

Howard’s former chief of staff and long-time Liberal functionary, Graeme Morris, insists that there really is no mystery to Howard: everything he ever wanted to do and everything he stood for was contained in that manifesto. Perhaps we never paid it the attention it deserved. Why were we surprised?

Under Howard we saw scenes that were far removed from the Australia in which we had grown up; we saw men in balaclavas with savage dogs patrolling the waterfront in a shabby exercise that saw some $150 million in public money being used to attempt to de-unionise the waterfront. This was Howard’s lifelong hatred of the Labor Party and the union movement come to the fore; in Peter Reith, subsequently disgraced both by his role in the children overboard affairs and his Telecard saga, he had his attack dog. Reith, in interview here, seems to be on happy pills, laughing and joking his way through; it was all a jolly jape, quite harmless really. And he would do it all again.

Alexander Downer, who seems to have been interviewed after lunch, characterises the government as having been run by four “warriors,” whom he names as Howard, Costello, Reith and himself. Only Peter Costello manages a sense of gravitas, which is not to suggest he engages in anything approaching profundity or even reflection. There is even a hint of anger, barely controlled, not so much directed at Howard as the electorate: the “tragedy” of the Liberal government, he says, is that after putting the economy in such a strong position it was voted out of office.

The problem with conservatives in Australia is that they enjoy an uneasy relationship with our egalitarian social traditions; they do not entirely trust the people. After all, this was why appeals to the Privy Council were insisted on by British capital at the time of Federation: the home-grown judicial system might not be so sympathetic. This is why Howard-style conservatives have clung to the union jack in the Australian flag: a home-grown democracy that repudiates English class capitalism might have ideas about reordering society. And it goes on.

Howard had to fight the unions; he had to oppose land rights for Indigenous people; he had to rewrite our national legend (“save it from the left,” is how he puts it) – not for any greater good so much as to stake a claim to his own legitimacy. After all, if we all start to believe that colonial capitalism was rapacious, exploitative and genocidal, Howard’s narrative platform of our glorious and conquering past begins to unravel and falters.

This is high drama from beginning to end, tightly scripted and brilliantly edited. The narration by Robert Menzies (the actor, not the former prime minister) is polished, low key and pregnant with tension. Visually, too, it is powerful: we see Howard, for example, at APEC just before the 2007 election, visibly deflate.

This is superb television: incisive, analytical and provocative. Quite simply, it is the best effort yet at coming to grips with these extraordinary years in which we all played a part in one man’s ambition. “Nobody could say I touched Australians politics lightly,” an unrepentant Howard says right at the end. No one would disagree. •

Norman Abjorensen is co-author of Australia: The State of Democracy, to be published this month by Federation Press. He was among the commentators interviewed for Liberal Rule, which will be screened on SBS over three weeks, beginning on 21 July.