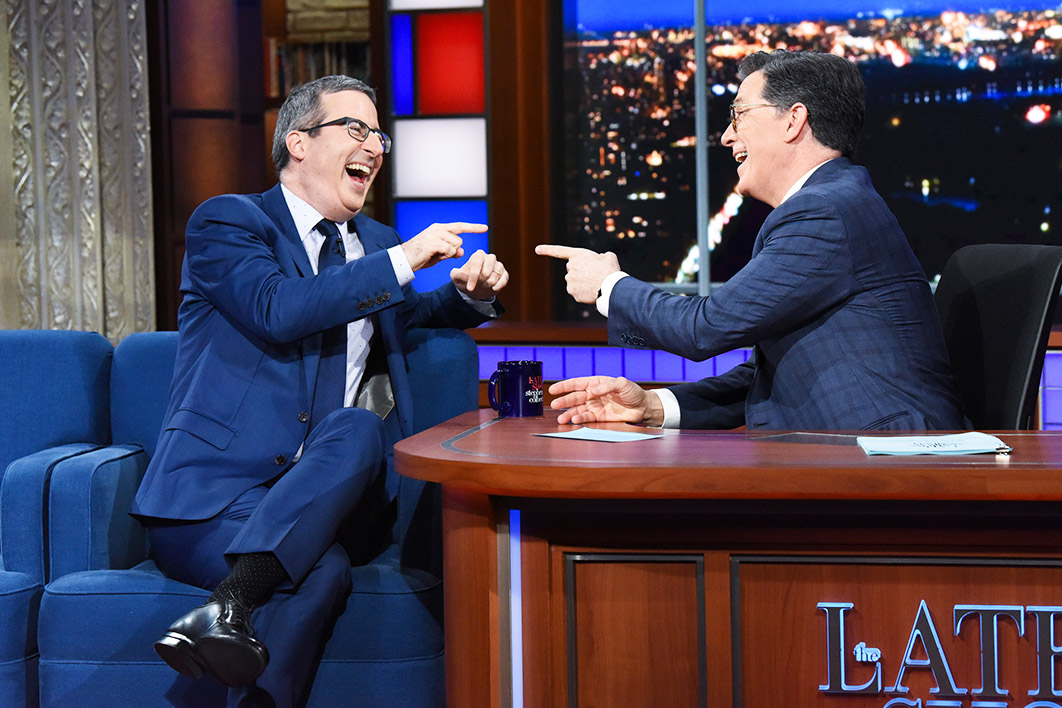 “Oh, please. Don’t allege that he’s thinking. Somebody told him something, and he can’t quite remember what it was. China bad, we good.” This might be a comment on Donald Trump from any recent American current affairs program. But it dates from 2003, when literary lion Gore Vidal was talking about George W. Bush, an incumbent he regarded as representing a new low for the presidency.

Vidal, an authority on the history of the office, died before a Trump candidacy was even the subject of speculation. Now, as the presidency goes much lower, commentators search for new terms of censure to deal with the almost daily assaults on human intelligence issuing from the White House. For some of the leading program hosts — people like HBO’s John Oliver, NBC’s Seth Meyers, CBS’s Stephen Colbert and Comedy Central’s Trevor Noah — the challenge has become an overriding concern.

Every time they front the camera, it is to deliver yet another critique of the most recent Trump pronouncements, often accompanied by quotations read in a parody Trump voice. The aim is to be nothing less than annihilating, but if the attacks need to be mounted night after night then they clearly aren’t working.

“This week was the worst,” Seth Meyers announced at the start of Monday’s edition of A Closer Look. His topic was the controversy over the Supreme Court vacancy left by the death of Ruth Bader Ginsburg, but his commentary swerved to a general portrayal of Trump, illustrated with random clips of the president boasting of his achievements. “Did they take out all his teeth and replace them with gummy bears?” Meyers speculated. “He sounds like Siri after you dropped your phone in the toilet.”

On the matter of the Supreme Court nomination, Meyer’s clips of Trump denouncing Obama’s bid to make a nomination before the 2016 election were prefaced with a remark that “the whole sarcastic comment thing” would be redundant, but nevertheless there were remarks to be made. “It’s not just hypocrisy, it’s nihilism.”

As host of The Daily Show, Trevor Noah features a segment titled Votegasm 2020, which does at least signal some satirical recognition that the pitch of the debate is an issue. Last week’s instalment, mainly about Trump’s handling of the pandemic, seemed designed to provide opportunities for Noah to put on a Trump voice and say things that were even dumber than what Trump actually said.

That’s standard satirical fare, and there is surely no political satirist in America who doesn’t do a Trump voice. In fact, one of the most irritating aspects of the Trump effect, at least as far as television is concerned, is the way it has triggered a pandemic of vocal impersonations. The only one who actually knows how to do it is Sarah Cooper, because she never tries to improve on the original.

Stephen Colbert has caught the virus worse than most, and finds it hard to go more than a couple of minutes without sliding into Trumpspeak. Like Meyers, he has also taken to declaring that he just can’t take it any more. Between now and the election is going to be a dark, dirty road, he announced on 22 September, “but on Friday it got so much worse.” He was referring to the death of Justice Ginsburg. With “Build that wall” having somehow fallen off the agenda, said Colbert, Trump has a new chant, “Fill that seat.” And a rear-view image of Trump playing tennis in tight shorts hit the screen.

The satirists don’t mind going low from time to time, when the game is being played that way, but that isn’t to say that their political engagement is not serious, or principled. Or genuinely witty. Colbert has a repertoire of finely tuned comedic skills, and as an interviewer he is capable of lightning responses to pretension and spin. He and John Oliver, his former co-star from the golden era of The Daily Show, have carried some of Jon Stewart’s sophisticated political instincts into their own shows.

As host of Last Week Tonight, Oliver has just won his fifth consecutive Emmy. He specialises in rapid-fire monologues in sentences that can run to a dozen clauses, accompanied by a suite of video clips whose cumulative effect is to portray Trump’s America as a domain under the sway of an infantile lunacy that rivals Lewis Carroll’s looking-glass world.

Oliver is strong on detail. His team researches key areas of policy so that the program is ready to deliver with chapter and verse wherever the next flare-up occurs. When Black Lives Matter protests led to violent clashes with police in June, he went viral with a thirty-minute tirade on “how the fuck we got to this point.” It was part history lecture on how US policing is entangled with white supremacy, part sociological analysis of police training and deployment, and part summary of the legal obstacles to holding officers accountable. But it was the sustained six-cylinder outrage that made it a tour de force in the annals of television.

Oliver has acknowledged the difficulty of maintaining a wider focus on political issues when Trump looms so large. It’s a constant battle, he says, to avoid having Trump stories “cannibalise” the program. But the Trump effect on him, as on so many other leading talents in American satire and current affairs, is to create a form of tunnel vision. The more ineffectual their attacks, the more fiercely they adhere to the conventional weaponry of satire and caricature.

Faith in skilfully crafted language as a weapon against hypocrisy has a deep cultural history, but it is associated with a heritage of moral superiority concentrated in the educated classes, and may foster resentments among those who have never felt part of it. Trump has unquestionably inflamed a historical cultural division in American society, and the risk is that these ad hominem attacks serve to further inflate his role as a figurehead on whom wider enmities are projected.

George Orwell warned that satire doesn’t work during periods of severe political deterioration because language itself loses its anchors in reality. The looking-glass world evoked by Lewis Carroll sounds the warning in a different way, by focusing on how logic is reversible and can pull up the roots of human reason if it is not reined in. One of the hardest things to come to terms with during the current great divide is that both sides think they are logical and are equally convinced that their vision is anchored in reality.

A Trump supporter known as “Mr. Obvious” garnered over 100,000 views on YouTube for a recent denunciation that adopts John Oliver’s own techniques to reverse the attack. We see Oliver making wisecracks accompanied by hollow laughter — and yes, they do sound pretty feeble out of context. His monologue on the killing of vigilante Jacob Blake in Wisconsin is answered point for point by a counter-narrative in which Blake is portrayed as a local worker called in to help an employer under siege and then set upon by the two assailants he subsequently shot. “John Oliver is lying from the get-go,” says Mr. Obvious, and as for the overall critique of Trump and his supporters, the Oliver doctrine can be summarised as “Orange man bad!”

Chas Licciardello, co-host of ABC’s Planet America, avoids the traps into which too many of America’s own leading commentators have fallen. I’ve often been frustrated at Licciardello’s insistence on giving Trump’s pronouncements the benefit of serious adjudication. Isn’t this helping to normalise what are essentially preposterous claims? But I’m starting to see what he’s trying to do. As he put it during a recent appearance on The Drum, “I’m worried that we’re trapped in a cycle of escalation.” As opposing sides tip further and further away from each other, he said, we get closer to the point where one or other refuses to accept the legitimacy of government.

In one of the most powerful statements made during the Democratic Party presidential debates, outsider candidate Andrew Yang described Trump as “a symptom of a disease that has been building up in our communities for years and decades.” If it’s about Trump, he warned, we lose. And he meant more than just losing the election. He meant the continuing loss of lives and livelihoods, personal hopes and civil rights, in a political system that has itself become the enemy of the common good. •