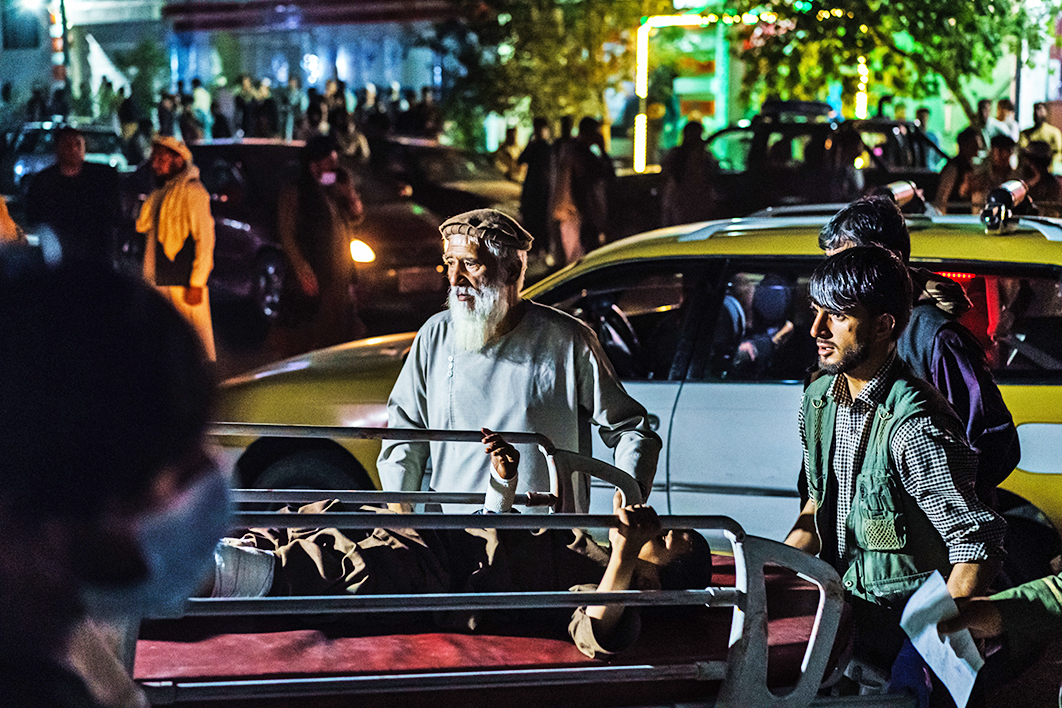 Suddenly the Taliban are looking relatively moderate — or at least not the most extreme among Islamist threats. They too are at war with Islamic State Khorasan, the ISIS offshoot that claimed responsibility for this week’s suicide bombings outside Kabul’s airport. For the Western countries extracting themselves from Kabul, will it be a case of our enemy’s enemy is our friend?

Even before the airlift of foreign citizens and at-risk Afghans has ended, the question presents itself: do we have any continuing interests in Afghanistan? That has just been answered: preventing terrorism, if nothing else. So, does the West work with a Taliban-run Islamic Emirate of Afghanistan or against it?

Much will depend on the nature of that government. Taliban leaders have promised that an amnesty will be applied to former government soldiers and civil servants, that women can work and girls study wearing only headscarves or cowls rather than the full-body covering, and even that the right kind of music will be allowed. Many with long knowledge of the Taliban will believe all this when they see it.

Future relations will also depend on who beyond the Taliban leadership the new government includes in more than a token way. Hamid Karzai, the president installed after the United States helped eject the last Taliban regime in 2001, is back in Kabul talking to them. Abdullah Abdullah, a veteran of the anti-Taliban Northern Alliance of the 1990s and a senior figure in the ousted Ashraf Ghani government, is another.

Afghan resistance is also a factor. Ahmad Shah Massoud, son of the legendary anti-Soviet mujahideen warlord of the same name killed by al Qaeda in 2001, is holding out in the Panjshir Valley north of Kabul. He may have been joined by Amrullah Saleh, vice-president in Ghani’s government, who stepped down and fled the country just ahead of Kabul’s fall — which Saleh says makes him the “legitimate caretaker president.” Unless Massoud can lever his way into power sharing and policy moderation, a new phase of civil war might be starting.

The Taliban must also grapple with an Afghanistan that is vastly more sophisticated than the one they ran in their previous five years of rule to 2001. In those days, non-violent resistance was by word-of-mouth and anonymous letters. In Herat, Mohammed Nasir Kafesh circulated his unsigned satirical poetry on scraps of paper, unsigned, and Leila Razeqi, after being expelled from university for being a woman, organised tutorials for herself and friends under the guise of a sewing circle.

As Financial Times correspondent Jon Boone has noted, Afghanistan had very few telephone lines twenty years ago. Now 90 per cent of the country’s forty million people have access to mobile phones, with twelve million using data services. Even illiterate people have smartphones and Facebook accounts set up by village phone shops. Journalism is thriving. Cities are full of young Afghans returned from study and work experience overseas. Taliban leaders themselves are adept users of social media.

All of this could be turned off, of course. During the advance on Kabul, Taliban units shut down local mobile networks at night to prevent tip-offs about their movements. But once safely in power, would the leadership rob themselves of this channel to the population, as well as all its potential developmental leaps in e-commerce and banking?

The Kabul airport bombings also provide an early test of assurances that Afghanistan will no longer be a base for external terrorists, as it was for al Qaeda under the previous emirate. At a meeting with Chinese foreign minister Wang Yi in Tianjin on 28 July, Taliban co-founder and political wing chief Abdul Ghani Baradar gave an assurance that the Taliban “will not allow Afghanistan to be used as a base for plotting against another country.” Wang asked the Taliban to “deal resolutely” with the East Turkestan Islamic Movement, an underground movement among the Uighurs of Xinjiang, adjacent to Afghanistan across the Pamir mountains. Baradar also welcomed continuing Chinese investment in Afghanistan.

Similar assurances — in their case, about Chechen jihadists and cooperative engagement — are thought to have been given to the Russians.

The Taliban also promised during the two years of negotiations in Qatar with Donald Trump’s special envoy not to let Afghanistan again be the base for terrorist groups. Trump didn’t achieve his second aim — getting the Taliban to enter power-sharing talks with Ghani’s government — despite releasing 5000 hardcore Taliban prisoners, who promptly went back into the fray. He went ahead anyway with his drawdown of US forces, to be completely out by 1 May this year, on the basis of the Taliban’s agreeing not to attack them. (Joe Biden extended the deadline to 11 September, the twentieth anniversary of the al Qaeda attacks that led to the US invasion, but later shortened it to 31 August.)

Separately, the Sunni-based Taliban assured Iran that it would no longer discriminate against or persecute its fellow Shia Muslims in Afghanistan, including the Hazaras, who streamed out as refugees, many to Australia, during the last Taliban ascendency.

In Pakistan, meanwhile, security analysts are cheering what they see as the severing of India’s post-2001 engagement with Kabul, which has seen about US$3 billion in investments and an array of civil society and state-building projects, including 2000 scholarships a year for undergraduate study in India.

Behind this upbeat appraisal is some nervousness about possible blowback into Pakistan itself. The Pakistani military’s Inter-Services Intelligence agency fostered the formation of the Taliban from the country’s Koranic schools and launched them across the border. Now analysts worry that Pakistan’s own Taliban will feel encouraged to step up attacks on the state. Prime minister Imran Khan sent his foreign minister around Iran and the Central Asian republics this week to enlist them in his push to urge the Taliban to reach out beyond its ethnic Pushtun base.

The same goes for Beijing. Beneath the derision at the failure of twenty years of US state-building is thought to be great unease at a radical Islamist regime being installed in the centre of the Eurasian network of its Belt and Road Initiative.

In Kabul itself, China, Russia and Pakistan have kept their embassies open. Saudi Arabia and the United Arab Emirates, which along with Pakistan were the only countries to recognise the last Taliban emirate, are likely to be back, along with Qatar, the recent intermediary between the Taliban and the United States. India has withdrawn, evacuating citizens as well as Sikh and Hindu locals, and is taking a wait-and-see position on reopening its embassy in consultation with Russia.

The Americans, of course, made a priority of helicoptering their embassy staff out to Kabul airport. But the two years of Qatar negotiations, circumventing the US-backed government in Kabul, have given Washington a greater familiarity with some of the Taliban leadership. On 23 August, Central Intelligence Agency chief William Burns flew into Kabul to meet the Taliban’s , presumably to talk about problems in the evacuation operation, but perhaps also to discuss longer-term issues. It can’t have been warm — the outfit that rained down Predator drone strikes talking to the one that set off roadside bombs — but it showed some pragmatism.

Two days later, US secretary of state Anthony Blinken said the Biden administration is not abandoning Afghanistan but rather shifting its focus from military power to diplomacy, cybersecurity and financial pressure. He said that the administration has worked hard to build alliances and that the United States would continue to work with allies in Afghanistan and elsewhere.

The financial pressure involves the conditions Washington has placed on the release of the US$9 billion foreign reserves of the Afghan state, which are held in US institutions, and the US$450 million in special drawing rights at the International Monetary Fund, in which Washington and the Europeans pull the strings. It doesn’t sound very friendly so far; more like war by other means.

And Australia’s role? When Biden announced in April his target of fully withdrawing forces, Scott Morrison’s government didn’t wait around. On 28 May, Canberra closed its embassy in Kabul, and withdrew the ambassador, Paul Wojciechowski, and his staff to the United Arab Emirates, from where they were to operate on a fly-in, fly-out basis, as required.

With its implied lack of confidence in Kabul, the rapid exit is said to have met with strong disapproval in Washington and London. In retrospect, it also pre-empted two and a half months of embassy operation on the ground that could have expedited visas and passages out for Afghans at risk because of their work with the Australian military and civil projects.

Veteran diplomats hear that a contributing factor was a fear among foreign affairs department figures that they would be blamed for “occupational health and safety” failings if anything went wrong. But some also believe that statements by defence minister Peter Dutton — that some former Australian army interpreters might have switched to the Taliban or Islamic State, or even steered Australian troops onto improvised explosive devices — suggest a cynical “playing to the base” in abandoning Afghanistan.

Just before yesterday’s bombing, Dutton reacted to intelligence warning of an imminent attack by withdrawing Australia’s small detachment of soldiers and officials from the airport, leaving the Americans and British to hold the line. He said it was “wheels up” on the evacuation that had brought out 4000 citizens and visa-holders, leaving behind an uncertain number. The defence minister indicated the operation is unlikely to resume in the days remaining to the Taliban and American deadline of 31 August for an end to the military evacuation of civilians.

Nor is Canberra likely to reopen an embassy any time soon. Morrison would be wary of offending the 26,000 veterans who served in the 2001–14 military campaign against the Taliban, with forty-one of their comrades killed and hundreds of them suffering physical injury and mental trauma. Voices among the 70,000 Afghan-Australian population also object strongly to any recognition of the Taliban they or their parents fled, even though an Australian mission would help them to bring out relatives.

Aid organisations are keen to resume operations, with one official telling me a working relationship with Kabul is necessary. A US congressional report on 30 April described how Covid-19 and rising urban poverty levels mean that 16.9 million people are facing a “crisis” of food insecurity, including 5.5 million people experiencing “emergency” levels — the second-highest in the world after the Democratic Republic of Congo — and almost half of children under five years old are projected to face acute malnutrition in 2021.

No doubt this will weigh little with the Morrison government, nor indeed the Labor opposition. Next week present and former leaders, John Howard and Julia Gillard among them, will join celebrations of the seventieth anniversary of the ANZUS treaty, glossing over the hasty exits from Kabul. It’s wheels up on that alliance exercise. Or is it? •