It’s time for Germany to throw off old habits, both on European policy and in how it deals with broader security challenges, writes Michael Bröning 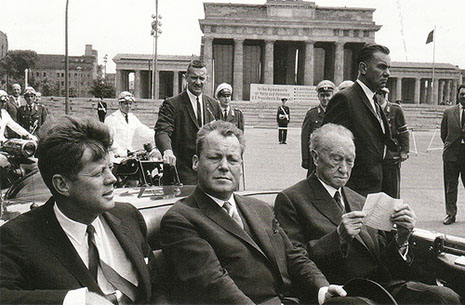 Divided city: US president John F. Kennedy with the mayor of West Berlin, Willi Brandt, and the West German chancellor, Konrad Adenauer, in front of the Brandenburg Gate in June 1963.
Photo from a contemporary postcard: Jeff Hart/ Flickr

BARACK Obama’s visit to Berlin in the coming week is overladen with symbolism. Fifty years after John F. Kennedy’s legendary visit to the then besieged city, Obama will address the German public in front of the historic Brandenburg Gate, a symbol both of the country’s dark national socialist past and of peaceful German unification.

The American president is expected to praise “the deep and enduring bonds between the United States and Germany and the vital importance of the transatlantic alliance.” Many Germans will doubtless be pleased by that sentiment, but that feeling of nostalgia will not provide any easy answers to critical questions about Germany’s political role in the twenty-first century.

As it stands, German foreign policy operates in two quite different ways. In all matters European, it uses the undeniable leverage of its economic strength to impose its views. For some, this unprecedented influence in Europe has signalled the emergence of an “accidental German empire.” More broadly, though, its tendency to avoid sharing responsibility in the face of wider security challenges has become an infamous and unfortunate German trademark. Matters are complicated by the fact that in both spheres, Berlin’s recent stance has been little more than a categorical rejection of alternatives.

Germany’s preaching of rigid austerity to struggling south European economies has certainly been warmly received by financial markets and parts of the German public. But it is becoming increasingly clear that Berlin’s management of the European economic and financial crisis has only made bad things worse. Berlin’s stance has contributed to a severe souring of relations with Germany’s closest partner, France, and has caused a surge in anti-German sentiment across the continent. In its last consequence, this policy threatens to endanger the very project of European integration – a keystone of German foreign policy in the postwar period.

Nor is all well at the global level. While Germany continues its engagement in Afghanistan and is an active player in development cooperation, Berlin’s policies have at important points become near-synonymous with inaction. Recent attempts to move beyond categorical principles and formulate proactive policies have been unsuccessful.

Germany’s lacklustre responses to recent crises in the framework of the Arab Spring are cases in point. Confronted with an escalation of violence in Libya in 2011, Berlin grappled with how best to respond. Ultimately, it used its hard-won seat on the Security Council to abstain from the vote on resolution 1973 backing a military intervention using “all necessary measures” to oust Libyan autocrat Muammar Gaddafi. Early this year, Berlin pursued a similar script in West Africa, leaving the thankless task of preventing al Qaeda from taking over Mali for the French to handle. Most recently, in Syria, Germany categorically denied military support to the opposition without suggesting a convincing alternative. Differences of opinion between EU member states effectively buried any chances for a united European response.

This is not to say that Berlin’s sceptical attitude towards intervention was unfounded or that the German opposition has offered a fundamentally different course. With federal elections looming in September, the German electorate today has little enthusiasm for engaging in Keynesian investments on a European scale. In foreign and security policy, Berlin’s hesitation to engage in military exploits is deeply rooted in public opinion and can seem justified against the historical backdrop of German militarism.

If only it were that simple. While the notion of “working for peace” – as coined by Germany’s current foreign policy parameters – is deeply rooted in German self-perception, soaring exports of German military hardware undermine any claims to the moral high ground. In the last year alone, German weapon manufacturers have reportedly doubled their sales to highly undemocratic Gulf States.

Given that in recent years Germany has shown a capacity for enacting far-reaching domestic socioeconomic reforms, the time is ripe for a reassessment of the country’s future role in global politics. Concerning Germany’s role in Europe, this requires first and foremost a rethinking of Berlin’s categorical “no” to alternative paths to economic recovery.

In terms of confronting global security challenges, principled caution should not be used as an excuse for free-riding. Political stances that seemed adequate for a divided nation in the bipolar cold-war world simply do not equate to a constructive multilateral role for a united Germany today. This is especially crucial in view of the fact that Berlin’s current swaying between dominance and abstinence is increasingly perceived not as an expression of altruistic restraint but rather a self-centred inflexibility.

Of course, the time for unilateral German power plays is rightly gone for good. The last thing that is needed is self-righteous claims for uninhibited leadership in Berlin. What is needed, however, is a change in approach that should be achieved via the framework of a common European foreign and security policy “committed to upholding and developing International Law” as stipulated by the European Security Strategy of 2003.

For such a common strategy to succeed, however, Berlin will need to question its long-cherished but increasingly one-dimensional hands-off approach to burden-sharing. Breaking with old habits won’t be easy. But, in many ways, overcoming this century’s political Berlin blockade seems as pressing as ending the physical blockade so eloquently condemned by John F. Kennedy fifty years ago. •

Michael Bröning is a policy analyst with the Friedrich-Ebert-Stiftung, a Berlin-based social democratic think tank. He also lectures politics at the Freie Universität in Berlin. This article reflects his personal opinion.

Sara Dowse reviews two books that deal, in different ways, with the future of Israel 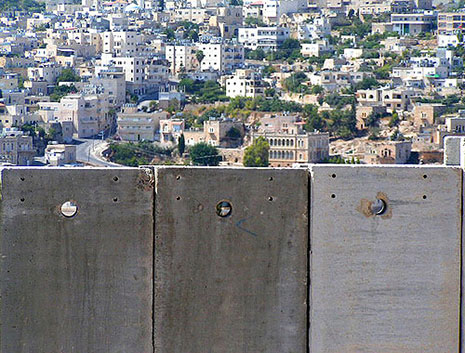