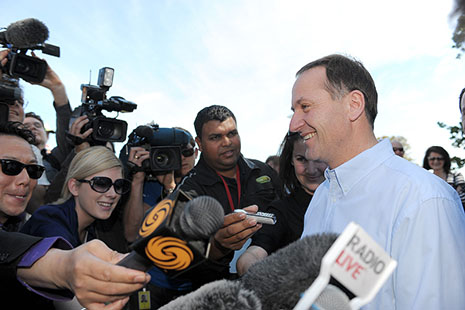 IT HAS TAKEN only seven months for New Zealand’s National government to lose its first frontbencher. The internal affairs minister, Richard Worth, was forced to resign following allegations, as prime minister John Key put it, of “a criminal nature.” One woman has laid a complaint “of a sexual nature” with police, while another woman, Neelam Choudary, has claimed sexual harassment after a string of phone calls and text messages from the minister. Earlier this year, the prime minister had reprimanded Worth for using his ministerial position to further his personal business interests during a visit to India.

An MP for ten years, Worth has not only left the ministry but also resigned from parliament. All in all, it’s an inglorious end to a relatively ordinary parliamentary career. Because he was a “list MP” under New Zealand’s Mixed Member Proportional system, no by-election was required; his National Party replacement, Cam Calder, moved straight into his place in parliament.

The first of the current complaints against Worth is under police investigation, and as a result not a great amount of detail is public. But Mrs Choudary’s complaint has titillated parliamentary and public debate over the past few weeks, leaving neither the prime minister nor the Labour opposition leader Phil Goff in a good light. Key has been seen to be evasive, initially citing “personal reasons” – always guaranteed to fuel salacious speculation – for Worth’s resignation, before back-tracking a few hours later, claiming he had absolutely no confidence in his former minister. Goff trod the difficult path of trying to gain political mileage out of the alleged weaknesses of a minister still under investigation.

During question time, Goff claimed that Worth was luring Mrs Choudary with an offer of a government board position. It was quickly made known that Mrs Choudary is an active Labour Party member, which threw a slightly different light on Labour’s line of questioning. Suggestions were made that Worth was a weak link in the National government and could therefore be “got at” by a Labour dirty tricks campaign, which used Choudary as the bait. It was also revealed that Mrs Choudary’s husband was convicted last year of fraud. Were such revelations the actions of discontented Labour members, National muck-raking, or simply good journalism? Most likely it was a combination of the three.

In a political sense, a major impact of the Worth resignation has been to shift the spotlight from the National government’s first budget in a decade, handed down on 28 May, only a week earlier. Finance minister Bill English delivered an understandably tough budget for tough economic times. Unemployment is expected to rise to 8 per cent (currently 5 per cent), promised future tax cuts have been cancelled, government pension fund contributions have been suspended until 2020, and major job cuts to the public sector will provide about $2 billion in savings.

The government is budgeting for a $9.3 billion deficit, and forecasting deficits through to 2016. But there are some positives amid the gloom. A substantial home insulation and heating rebate scheme has been funded, there is an increase in funding for school infrastructure, and police numbers will be increased by 600 over the next two years. Earlier this year, the government also announced economic stimulus projects targeting national highways and state housing.

Like Australia, the Key government has invested heavily in infrastructure projects to stimulate the economy. But while the Rudd government also introduced its Household Stimulus Package – giving most Australians a $900 bonus to spend – the Key government decided not to follow suit, fearing that the country’s credit rating could be adversely affected.

Thanks to the global financial crisis, both governments have been able to break election promises without serious political damage. In these troubled times, such measures can be sold as prudent economic management. In New Zealand’s case, it also fits in nicely with the old political truism of making your first budget after an election the harshest so that you can ease the pain closer to the next election.

IN MAY I discussed the challenge for Labour to retain Helen Clark’s old seat of Mt Albert in the by-election held on 13 June. Largely due to the efforts of the National Party candidate, Labour was able to retain the seat easily. Labour’s candidate, David Shearer, won 63 per cent of the vote, higher than the popular Helen Clark achieved in 2008. The National vote dropped 12 points to 17 per cent.

National’s candidate Melissa Lee, already a sitting List MP, was increasingly referred to as the “gaffe-prone” Ms Lee throughout the campaign. Some of her more interesting mis-steps included saying that a proposed motorway would divert criminals past the electorate and telling an audience of low-income earners that she was probably only on about $2 an hour. (Ms Lee’s salary is $131,000; the minimum wage in New Zealand is $12.50 per hour.) John Key, who had anointed Ms Lee to contest the by-election, was tellingly absent from her election night gathering.

Some interesting asides from the by-election: Turnout was only 48 per cent (compared to 80 per cent in 2008), so it is difficult to read too much into the results and swings. Under New Zealand’s electoral system three of the losing candidates – the National’s Lee, Russel Norman (Greens), and John Boscawen (ACT) – return to parliament anyway, as they are already List MPs. • 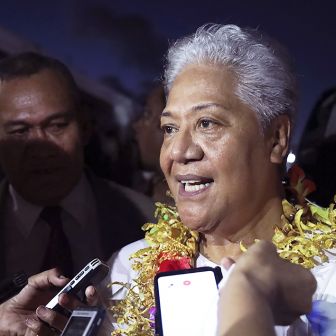