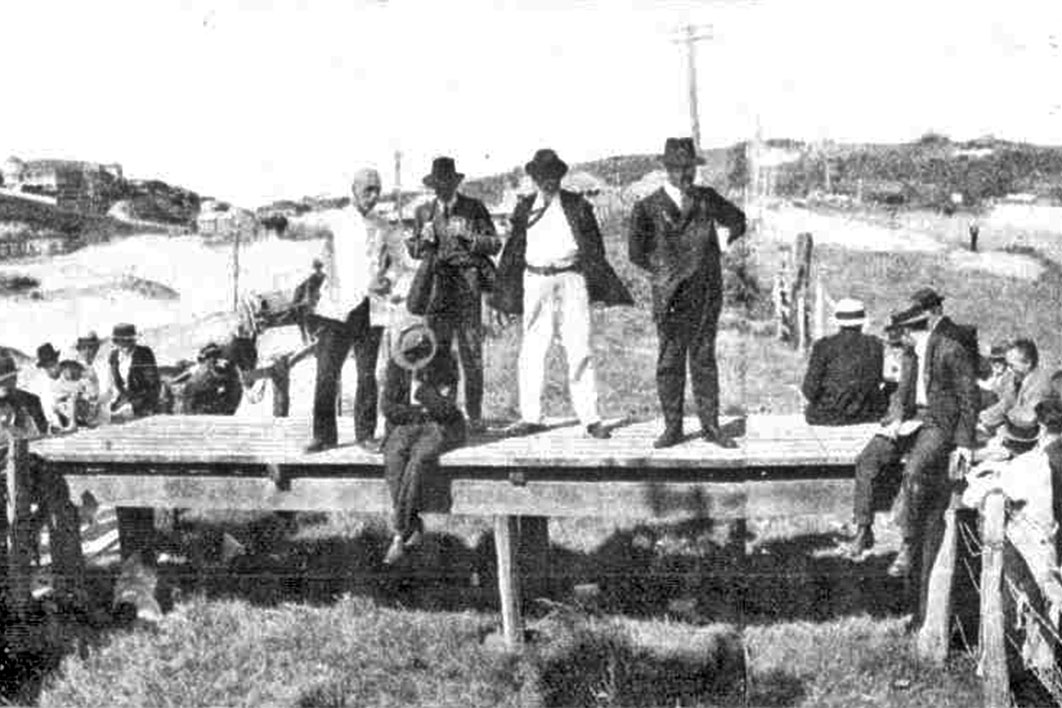 This week’s closure of the NSW–Victoria border may have come as a surprise to many, but at least it was agreed to by the two state premiers. The story was rather different when the border was last shut, just over a century ago.

Australia’s first case of Spanish flu was detected in Melbourne in January 1919. Three months earlier, the states and the Commonwealth had agreed that, if the flu broke out, the states could impose border controls to try to limit its interstate spread. The affected state would notify the Commonwealth, which would then take complete control of all interstate traffic. Movement between the affected state and other states would be suspended for as long as the latter remained influenza-free; if they also had cases, then interstate travel could resume between infected states.

An exception was made for local movement across state lines by residents within ten miles of a border “in an area which is clean.” This meant that the residents of the twin towns of Albury and Wodonga, for instance, were permitted to cross the border.

Despite all the planning, the Victorian government took a fortnight to acknowledge that Australia’s first case of Spanish flu had been detected in Melbourne. By then, a soldier infected in the Victorian capital had travelled north across the state border. Within a day of New South Wales being proclaimed infected, Victoria finally informed the director of quarantine, John Cumpston, that it, too, had cases. Faced with Victoria’s tardiness, the NSW government considered the prior agreement to have been revoked and unilaterally shut the border.

Although Victoria carried on with business as usual, these events provoked a free-for-all among other states. Queensland prohibited interstate movement even for people living within ten miles of the border. South Australia blocked land traffic from Victoria, and Western Australia prohibited all land traffic from other states. Tasmania, meanwhile, required a week-long quarantine period, either before departure or on arrival.

Despite its own view that internal border closures were impractical and ineffective, the federal government was left powerless. This was seen as a real test of Commonwealth authority in the new federation, with an article in the Warwick Daily News arguing that “the actions of the State Governments in maintaining their own border quarantine restrictions was rapidly producing a crisis in the affairs of the Commonwealth.” The acting prime minister, W.A. Watt, negotiated a “system of cash and travel vouchers for citizens stranded outside their home states,” writes historian Humphrey McQueen, but beyond that, his powers of persuasion were “negligible.”

In practice, border closures were commonly evaded. People were smuggled across the NSW–Victoria border at points where supervision was lax, and the flu spread. New South Wales subsequently created a permit system at most border crossings and established quarantine detention camps at a couple of others, requiring people to stay for four days.

Not a single case of influenza was detected in the camps, though that seems to be a result more of poor testing than of an absence of disease, since numerous cases were discovered on ships arriving in Sydney and Brisbane during the same period. The director of quarantine scathingly described the camps as “either a useless infliction on persons travelling, or a positive danger, not only to the travellers, but to the community concerned.” While the ships were “entirely under control,” he wrote, “Inter-State quarantine has to face the difficulty of traffic at many hundred points along a border hundreds of miles long.”

Despite the innovations of the past century, it seems remarkable that we are still facing challenges at the borders. We now have drones and other surveillance technology, but the pandemic shows just how reliant we are on people themselves — to observe physical distancing protocols, to manage movement and, ultimately, to stop the spread of the virus.

Given how preoccupied successive governments have been with Australia’s external borders, it is also interesting to see a renewed focus on internal borders — which are, in fact, where the regulation of people movement began, centuries ago. The international controls on mobility with which we are so familiar — manifested in passports and visas — grew out of monitoring of movement within states, which was common across medieval Europe and continued into the modern period. Even Australia had its own “colonial passports” in the 1810–20s, issued to convicts, free settlers and visitors to establish their identities and facilitate movement within the colonies.

Up until Federation, the colonies had full discretion over who crossed their borders. But the High Court ruled in 1912 that section 92 of the Constitution (which provides for “free intercourse” among the states) and the act of federation itself limited states’ ability to deny entry to “undesirable immigrants” from other states. The court did recognise, however, that a state was entitled to take precautionary measures against dangerous people or other risks to “its health, or its morals.”

Subsequent cases have affirmed that while the Constitution guarantees freedom of movement across state borders, “a law may incidentally restrict movement interstate, provided the means adopted are neither inappropriate nor disproportionate.” It is now generally accepted that the Constitution’s “guarantee of internal mobility within Australia” may be subject to reasonable, legitimate restrictions which, in principle, include protecting the public from a pandemic. •

Jane McAdam is Scientia Professor of Law and Director of UNSW’s Kaldor Centre for International Refugee Law. She has written about the intellectual history of freedom of movement in international law.