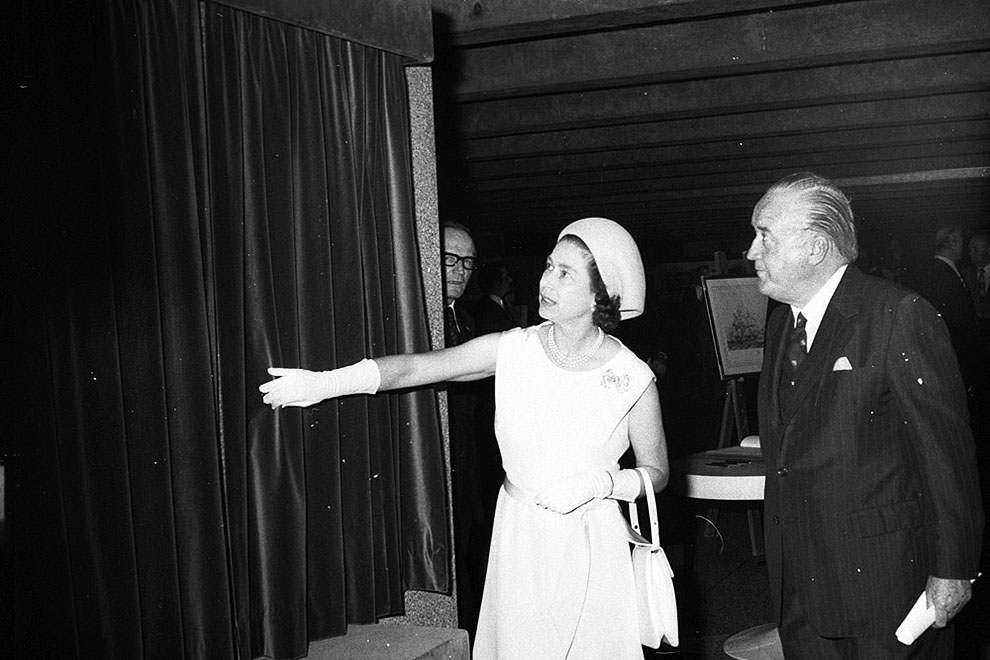 Like us, but slightly better: NSW premier Bob Askin with the Queen at the opening of the Sydney Opera House in 1973. Jack Hickson/State Library of New South Wales

If the Trump victory in the United States represented a backlash against a perceived self-interested “political class,” just as the Brexit vote did in Britain, Australia is by no means immune to the contagion. It is no exaggeration to say that Australia’s once reasonably robust democracy is in a state of malaise, with public trust in government slumping to a new low as politicians fail to meet public expectations.

The problem here is twofold: flaws in the political system as a whole – federalism, parliaments, accountability and the parties themselves – and flaws in the people chosen by the parties to act as the people’s representatives. With a decline in membership of political parties to under 2 per cent of the population, parties are hardly representative of the broader community, and political candidates consequently come to be seen as privileged members of a political class.

In a country that once entertained the idea of egalitarianism as a national characteristic, the notion of a political elite sounds somehow foreign and far-fetched; the “common touch” has been a trait much admired by the people and often feigned by politicians. Bob Askin, the controversial former Liberal premier of New South Wales, once characterised the public ideal of a political leader as being “just like them but slightly better.”

Despite survey after survey pointing to declining levels of trust, politicians are doing little to address this decline; indeed, a spate of well-publicised failings in recent months, mostly among state politicians, has merely added fuel to the fire of public cynicism. Human beings are fallible, of course, but public life demands high standards (like us, but slightly better) and when failings are revealed, the system takes a double hit: first, questions about the judgement of the political parties in promoting that person; and, second, an increased perception that, once in public office, politicians are no longer bound by the ordinary rules. (This is, of course, a variation on the theme developed by the great Yugoslav dissident Milovan Djilas, who indicted communism for creating a “new class,” the title of his best-known book.)

In very recent times, the public has been treated to the resignation of Queensland’s agriculture minister, Leanne Donaldson, over a series of unpaid bills; of Victoria’s corrections minister, Steve Herbert, over his use of his official car to transport his (unaccompanied) dogs; and of Tasmania’s mining minister, Adam Brooks, over a perceived conflict of interest. An allegation of bullying has been made against Tasmanian police minister Rene Hidding; claims of undeclared business interests and illegal political donations have been levelled against the new NSW deputy premier, John Barilaro; South Australian water minister Ian Hunter has delivered a foul-mouthed tirade in an Adelaide restaurant; and disquiet has arisen over SA attorney-general John Rau’s bid to have himself appointed a senior counsel (his name was not on the circulated list of applicants, but he was ultimately successful). At the federal level, questions hang over the eligibility of two senators to take their seats. (One of them, Family First’s Bob Day, has since resigned; the other, One Nation’s Rod Culleton, is also under investigation in Queensland over a provocative letter he wrote to a magistrate.)

Amid these unedifying episodes comes the latest Scanlon Foundation survey of social cohesion, which points to a continuing decline in public trust for the federal government – down to just 29 per cent in 2016. Among respondents, concern about the quality of government and politicians ranked as second in importance just behind the economy.

The Scanlon report attributes declining trust in the political system partly to a failure to tackle issues supported by a majority of electors. When it sought views on current environmental and social issues, it found majority support for legislative action in four key issues:

The growing perception of an unresponsive political system has been accompanied by an increase in political disengagement. Taking the opportunity of its timing in the weeks after the 2016 election, the survey asked respondents how much interest they had in the election campaign. Fourteen per cent of respondents indicated “none at all” and 20 per cent “not much” – a total of 34 per cent. Analysis by age group and gender found that the highest proportion indicating “none at all” was among men aged eighteen to twenty-four, at 23 per cent, compared to 7 per cent of women within this age group.

The findings were consistent with earlier indications of a growing sense of political disengagement and public cynicism. A 2013 report on political engagement by the ANZSOG Institute for Governance suggested that citizens felt themselves relegated to the status of observers of formal politics and that 90 per cent regarded themselves as having no influence over the federal government. Other levels of government – ostensibly closer to the people – fared little better, with 70 per cent coming to the same conclusion about state, territory and local government.

The ANZSOG survey revealed evidence of negative attitudes towards politics and politicians comparable to those found in other contemporary democracies including Britain, the United States and Finland. But these attitudes had emerged in Australia in what was a relatively benign economic context. The level of discontent was disturbingly high, with over a quarter of Australians combining a set of substantially negative attitudes towards politics and politicians: irritation at politicians “talking rather than acting,” for instance, and at the deal-making involved in political life; and support for a greater role for non-political figures, including businesspeople and experts, in public decision-making.

The political insurgencies in the United States and Britain were attacks on political elites that were seen as unresponsive; so, too, was Rodrigo Duterte’s rise to power in the Philippines, and the rise of the far right in Europe, notably in Poland, Hungary and Austria.

Although these insurgencies are less in evidence here, that should not blind us to the dangers. Indeed, twenty years ago there was a foretaste of sorts in the 1996 election that brought John Howard to office, helped by the so-called “Howard’s battlers,” blue-collar former Labor voters who turned on Paul Keating with a vengeance. Keating, for all his vision, simply had no time for those who were left behind by the liberalisation of the economy, which he so ardently championed.

One Nation was a by-product in 1996, and its resurrection as a political force twenty years later is a warning signal. Its anti-globalisation themes and nativism resonate with much of Donald Trump’s rhetoric.

Political loyalties have undoubtedly fractured. In 1980, Labor and the Coalition captured 92 per cent of the House of Representatives vote; this year, the two major parties’ share was less than 77 per cent. Over those three-and-a-half decades, traditional voting patterns have been in decline, first with the arrival of the Democrats and their post-materialist concerns, and then with the rise of the Greens.

Regional differences also figured to a far greater extent than previously, which has possible implications for the major parties and their declining support bases. One Nation, for example, polled 10 per cent in Queensland and the Nick Xenophon Team won almost 22 per cent in South Australia. In terms of disengagement, around 20 per cent of those eligible to vote didn’t vote, didn’t enrol to vote, or voted informal.

The forces unleashed by the new mood are creating uncertainty, strategically as much as economically, in an increasingly volatile international environment. Confidence in political arrangements and those entrusted with political management have not been needed so critically since the dark days of the second world war, seven decades ago. On the available evidence, we appear ill-prepared to meet these new challenges. •

Norman Abjorensen of the ANU Crawford School of Public Policy is co-author of Australia: The State of Democracy.