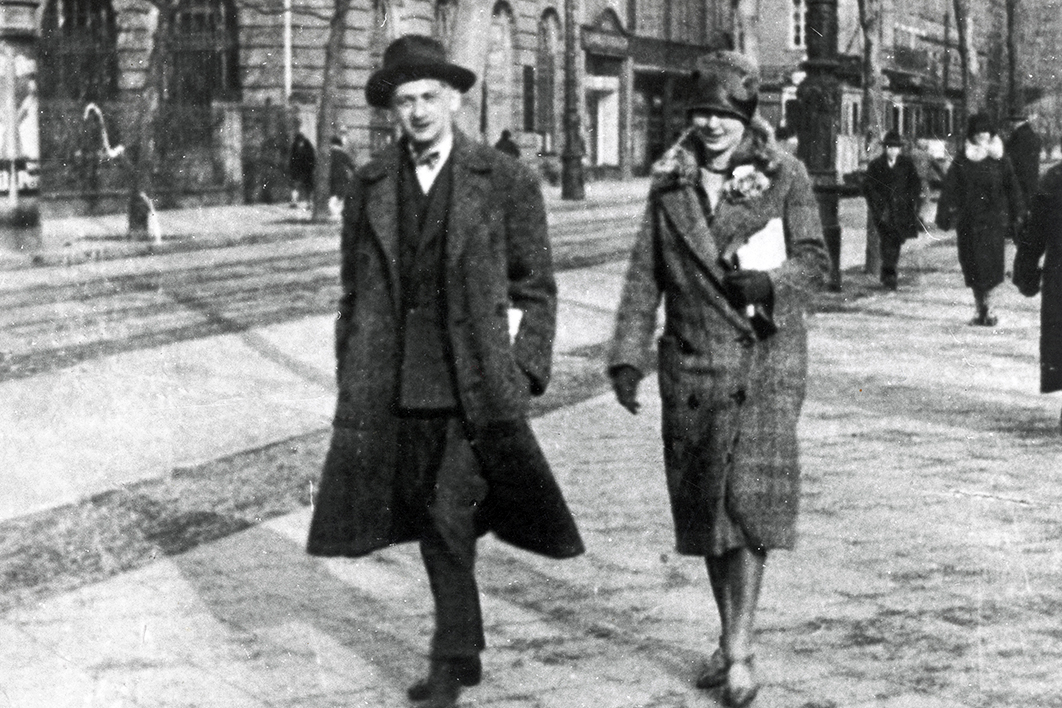 When Joseph Roth was in his final year of high school in Brody, Galicia, in 1913, he competed with another young man called Schapiro for a prize that required them to write an essay “On Opportunity and Compromise.” When the entries were judged, one of the teachers predicted that “in future years Schapiro would sit in the coffee houses reading the newspapers, and the best articles he would read in them would be by Joseph Roth.”

While Keiron Pim says nothing further about Schapiro in his biography of Roth, Endless Flight, we know that the essential part of the teacher’s prophecy came true: Roth went on to achieve international fame as a journalist and a novelist. His career took him from Brody to university studies in Lviv, in present-day Ukraine, and then Vienna, to service in the Habsburg army during the Great War, to substantial periods of residence in Berlin and Paris, and on extensive travels throughout Europe, including as an exile from Nazism in the 1930s.

As all these journeyings perhaps suggest, any attempt to assign Roth a distinct religious, ethnic or political identity on the basis of his own actions or words would fail. He was born into a Jewish family and Jewish traditions, but was known to attend the Catholic Mass. He moved from Lviv to Vienna because — as he told a Polish-speaking uncle — he “could not be unfaithful to the German language” but rhapsodised over Paris the first time he went there, writing to his editor at the Frankfurter Zeitung that: “I feel driven to inform you personally that Paris is the capital of the world… Whoever has not been here is only half a human, and no sort of European.” He was pacifist and a socialist in his younger days, but joined the Habsburg army in 1916 and later advocated a restoration of the Habsburg monarchy, believing it preferable to the other forms of conservative and nationalist rule that threatened to overtake — and of course eventually did overtake — Austria in the 1930s.

Pim sees Roth’s shifting self-concept, and his experience of and fascination with the Austro-Hungarian empire, as two important factors that attract twenty-first century readers to his works — those readers who “recognise his crisis of identity; and, not least, are primed for a nostalgic pull towards the aesthetics and perceived values of his Mitteleuropa as its last inhabitants fade from view.”

It is clear from Pim’s pages that the intriguing contradictions he identifies in Roth’s personality and mentality do not mean that Roth was always an admirable man, or an easy man to deal with. He lied repeatedly about his service in the Great War, claiming experiences of combat, capture and escape that never occurred. His complex relationship to his Jewish heritage included abuse of his employers at the Frankfurter Zeitung, with whom he had various contractual disputes, as “scheming Jews.” While he adopted the habitus of a Habsburg gentleman from the mid 1920s onwards — wearing narrow-cut trousers like an army officer’s, carrying a walking stick, indulging in chivalrous flourishes such as kissing women’s hands and sending them yellow roses — he was anything but gentlemanly in other ways, writing while at university in Vienna that female students were “no more women than streetwalkers” were, engaging in affairs throughout his marriage to Friedl Reichler, and — during his relationship with the German author Irmgard Keun in exile in the mid 1930s — sleeping with one fist grasping Keun’s hair from sheer possessiveness.

He was also a heavy drinker for about half of his life, and an alcoholic in his last years; Keun left behind a harrowing description of how he retched for extended periods every morning before vomiting blood and bile. And Roth’s hopes of restoring the monarchy to Austria eventually moved from wishful thinking to black farce; I doubt that I have ever read anything more ridiculous than Pim’s account of how, in 1938, Roth and others planned to smuggle the exiled Otto von Habsburg to Vienna in a coffin purporting to contain the body of an Austrian commoner who had died abroad, whereupon Otto would be proclaimed Emperor. (“With the monarchy thus restored, Roth believed that the British monarchy would ally with their Austrian peers and France to present a strong front against an expansionist Germany.”)

Given that Pim identifies various qualities in Roth’s writing as attractive to twenty-first century readers, I found his attitude to Roth’s fiction surprisingly mixed. He describes Roth’s most famous work, The Radetzky March, which chronicles the decline of the Austro-Hungarian empire, as “one of the greatest novels of the twentieth century.” (I would prefer to say that it is one of the greatest German-language novels of the twentieth century.) Beyond this, though, he often qualifies his praise of one work or another, if he praises it at all.

Thus, Zipper and his Father is “a wonderful novel,” but also the first to contain a “thoroughly realised, deeply imagined, three-dimensional character,” which of course says little for its predecessors. Similarly, while The Antichrist is “of biographical interest,” it is “a dissatisfying work to read.” Moreover, Tarabas is “not among [Roth’s] best works” and Confession of a Murderer is “weak.” As for the short story “The Triumph of Beauty,” it is misogynistic, and “an ugly blemish on [Roth’s] œuvre.”

Pim’s remarks about Roth’s journalism are more positive. This is the work that first made Roth famous, and in which he claimed (in a letter to one of his editors in 1926) to be doing nothing less than “paint[ing] the portrait of the age.” Pim positions Roth’s journalism adroitly within the sometimes arid literary debates of the 1920s (and after) about “New Objectivity.” He praises Roth’s accounts of a journey in eastern Europe in 1924 for showing “how beautifully he wrote about phenomena others perceived as ugly,” and singles out his sketches of cities and lives in southern France in 1925 for particular attention as “the peak of what we could call Roth’s ‘lyric journalism’.”

Pim also notes numerous incidental but striking facts about Roth’s newspaper work: for example that in the year 1927 he travelled to nine different countries in search of material; that the Frankfurter Zeitung deleted criticisms of Mussolini in his despatches from Italy in 1928 without consulting him; and that the same newspaper paid Roth one mark per printed line (with a guaranteed minimum of one thousand marks per month), which prompted him to handwrite his copy in such a way that one line in manuscript corresponded to one line in newsprint.

Pim’s accounts of Roth’s work more generally also contain a number of fascinating details. His novel The Spider’s Web, which was published as a newspaper serial in 1923, was the first novel to mention Hitler. (I am not sure how this could be proved absolutely, but it seems highly credible given the date.) When a newspaper interviewer asked Marlene Dietrich in 1936 about her favourite book, she nominated Roth’s novel Job. And — more chillingly than these passing references — the manuscripts and other papers Roth left behind when he emigrated in 1933 were fortunate to survive a Gestapo raid on his German publisher. Similarly, the papers from exile that survived after Roth’s death in France in May 1939 were preserved by a redoubtable elderly Parisienne who told one of Roth’s cousins in 1946 that she had hidden them under the concierge’s bed.

Alhough I read Endless Flight with interest, I sometimes felt that Pim was unnecessarily eager to provide comprehensive information. For example, I could probably have done without the half-page description, plus photographs, of how the street and the building in Lviv where Roth lived in 1913–14 look today: “The chipped wooden handrail is supported by an art nouveau balustrade, and as you tread the wide, worn steps they croak like marshland frogs.” And I could definitely have done without the footnote explaining that Pim’s grandmother lived in the same street as Friedl Reichler’s family in post–Great War Vienna and speculating rather bathetically: “Perhaps my ancestors were even acquainted with Roth owing to his regular visits to the apartment across the street. There is no way of knowing, as they are all long gone.”

As the quotation about the steps that “croak like marshland frogs” suggests, Pim sometimes attempts a colourful or evocative style. Though other readers may disagree, I found some of these attempts rather pretentious or clichéd. Thus the passage about the steps is followed by some rather breathless remarks about Lviv: “In the twenty-first century this palimpsestic city has a strange mystique… The present here is a membrane pressed upon by a heavy past: you feel its weight without knowing its details,” and so on. And Pim’s evocation of the view from the hotel where Roth stayed in Paris in 1925 put me in mind of a travel brochure:

The windows of the Hôtel de la Place de l’Odéon look out from between blue shutters over an eighteenth-century Parisian plain dominated by the eponymous neoclassical theatre, before which roads spear out like compass points, tempting the visitor to pursue every angle into the Left Bank. To the hotel’s right runs the Rue de l’Odéon, which was home in the early twentieth century to a community of Anglophone authors and the Shakespeare and Company bookshop; in 1922 its owner, Sylvia Beach, published Ulysses by James Joyce, who dubbed the area “Stratford-on-Odéon.” The gorgeously sombre twin-towered church of Saint-Sulpice stands 200 yards to the west.

Pim sometimes also uses this portentous style to prop up political and literary judgements for which he offers very limited evidence. His description of Roth’s first foray to Berlin, in 1920, prompts him to declare that the Weimar Republic was “a curious mixture of postwar chaos and compromise dressed in unattainably high ideals that lent it a haunting capacity for failure” — a pronouncement that sounds more like wisdom after the event than informed intellectual analysis, notwithstanding Pim’s brief references to such phenomena as the proportional voting system (which of course has operated successfully in the Federal Republic of Germany since 1949).

I was also puzzled by Pim’s opinion of Stefan Zweig, a literary colleague who lent Roth considerable support during their exile:

Zweig is less remarkable for his own artistry than for what he connotes, namely the bohemian Viennese coffee-house culture… from the fin-de-siècle to the entre-deux-guerres period. Judging by his work alone it is hard to gauge how he gained such prominence…

His memoir The World of Yesterday is a detailed and valuable exposition of that era… His prose is often engaging, but never irresistible. It is competent and smooth, but too smooth, too dispassionate, written with pathological reserve… Where Roth is a double espresso, Zweig is a half-decent mocha, served lukewarm.

Pim’s grounds for this lofty dismissal of Zweig are unclear, beyond a few passing observations, including the remark that some of Zweig’s fellow authors “mocked his grasp of grammar.” Moreover, if I have interpreted correctly a paragraph in Pim’s acknowledgements about his familiarity with German literature and language, he has not read Zweig in the original.

Endless Flight is well produced and well edited. There are many intriguing photographs, though a few (like that of the present-day railway station in Brody) seem rather superfluous, and most of the photos are annoyingly small. I found no misprints, and only one error of fact — when Pim says that the Frankfurter Zeitung paid Roth in “deutschmarks” rather than reichsmarks; the deutschmark did not exist until 1948. In noting the latter point, I send a prayer — assuming there is a deity that protects literary reviewers — that I have not made any errors myself here. •

Geoff Wilkes is a Senior Lecturer in German Studies at the University of Queensland.