Post-lockout, fortunes are mixed in the Cross

The big clubs aren’t happy about the new alcohol rules in Sydney’s Kings Cross, but what about the other people who rely on the area for their livelihoods? Daniel Nethery took a stroll along the Strip 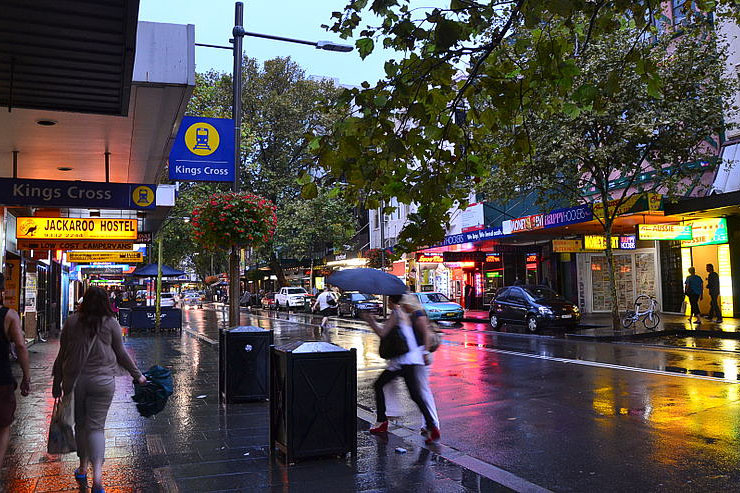 “You’re the first person who’s asked,” a Kings Cross small businessman said when I enquired how his business had fared since “the lockout” began. New regulations, introduced in January this year, require clubs to close their doors at 1.30 am and serve last drinks at 3 am. For anyone who knows the Cross – and I have lived here on and off for the past five years – the change is striking. Friday and Saturday nights no longer bring in tides of young club-goers; the streets seem almost empty by comparison. I have seen tourists with travel guide in hand looking around in bewilderment, obviously wondering whether they have come to the right place. I have spoken with people who have returned after many years and can’t believe the old Cross is dead.

The impact on the big clubs is obvious enough, and they have had no trouble making their voices heard in the media. But those who live in the Cross know that there is more to Darlinghurst Road than the big operators, and I haven’t read or heard anything about how the new rules have affected small businesses. So I decided to ask them myself.

After interviewing twelve small businesses along Darlinghurst Road’s famous Strip, it was clear to me that their fortunes reflect whether their clientele is made up mostly of club-goers, backpackers or locals. Not surprisingly, businesses reliant on club-goers are feeling the greatest impact. A liquor store worker told me that sales are down 40 per cent, not only because customers are down, but also because the large clubs are ordering less stock. One salesperson complained that the regulations are costing him twelve hours of pay per week because the shop now closes at 10 pm rather than midnight. A tobacconist reported that his sales are down 25 per cent. Many owners told me that taxi drivers are hurting, too, because traffic to and from the Cross has plummeted.

Despite their overwhelming numbers on weekend nights, though, club-goers are only a fraction of the customer base for most small businesses. More important are backpackers. Many small businesses complained that falling numbers of backpackers have left them out of pocket. One juice shop worker said that its drop in customers has been entirely due to fewer backpackers. A Thai massage parlour owner told me that his sales are down because tourists come for a massage after getting off or before getting on the plane, and now there are fewer of them. A busy cafe owner reported that fewer tourists come for breakfast. One convenience store worker was more optimistic: while business had been slow, he felt backpacker numbers were increasing as the Australian dollar fell.

Businesses catering for local customers, however, were uniformly upbeat about the changes in the Cross. One small business owner, who insisted that he didn’t agree with strict lockout laws, conceded that the changing character of the area augured well for his business. Another owner thought the place would “flourish – in six to ten years time this area will be like Double Bay, and we’re going to benefit.” A new pop-up outlet suggested that at least one entrepreneur saw opportunities in a quieter Cross. Several takeaway food stores have closed, and while some premises are still empty – partly because, as one owner pointed out, landlords have not adjusted their rents to take account of the change in trading conditions – in other cases very different restaurants are taking their place.

One new owner had spent more than three years in Kings Cross and Potts Point before making the decision to open a restaurant. “I feel lucky to come here at this time,” he told me. “Kings Cross is transitioning from a night-time to a day-time business model, and I understand it’s hard for some people. But for me, it’s a good thing.” He said that his customers include people from down the street in Potts Point, who would have been unlikely to venture up to the Strip before. “It’s a good sign – and they’re happy to find something new.”

Business owners recognised the need for changes in the drinking culture, but some asked what positive measures accompanied the lockout rules. Although the new restaurant owner said that the council has proven very helpful in helping him set up his business, three other shop owners complained about red tape causing delays in applications for outdoor seating. As one businessman put it, “Sydney should be a twenty-four-hour city – we have a Mediterranean climate here. We should be doing what Melbourne does.” Yet applications for outdoor seating, which would change the feel of the street, have met with unexplained delays, frustrating business owners looking for ways to recoup costs lost to fewer backpackers and club-goers.

If the council plans to create favourable trading conditions for small venues, then regulations must adapt: one cafe owner told me that she was licensed to serve alcohol until 2 am, but was not allowed to advertise the fact, which meant that most people still went to the big clubs and pubs for a drink. Others questioned whether the Medically Supervised Injecting Centre should remain in a street trying to attract customers to outdoor seating areas.

The owners and workers I interviewed were more than happy to talk about their business and the future of the Cross. Most of them were waiting for the summer months to measure the full impact of the lockout laws. Staff in a tattoo parlour commented, like many, that the drag on business caused by the lockout doubled up with the generally slower winter months. “The timing was unfortunate,” commented one. “But nobody ever asks us before they change the rules.” Will the state government’s review of the lockout laws, which has been brought forward to next year, consult not only with the big fish of Kings Cross, who have the resources to push their case, but also with a full range of businesses which together create the unique feel of the Strip? •

Daniel Nethery is a PhD candidate at the Crawford School of Public Policy at the Australian National University.