Pride and Prejudice in the warzone

Television | It’s War and Peace’s turn for another BBC adaptation, writes Jane Goodall. But perhaps some temptations should be resisted 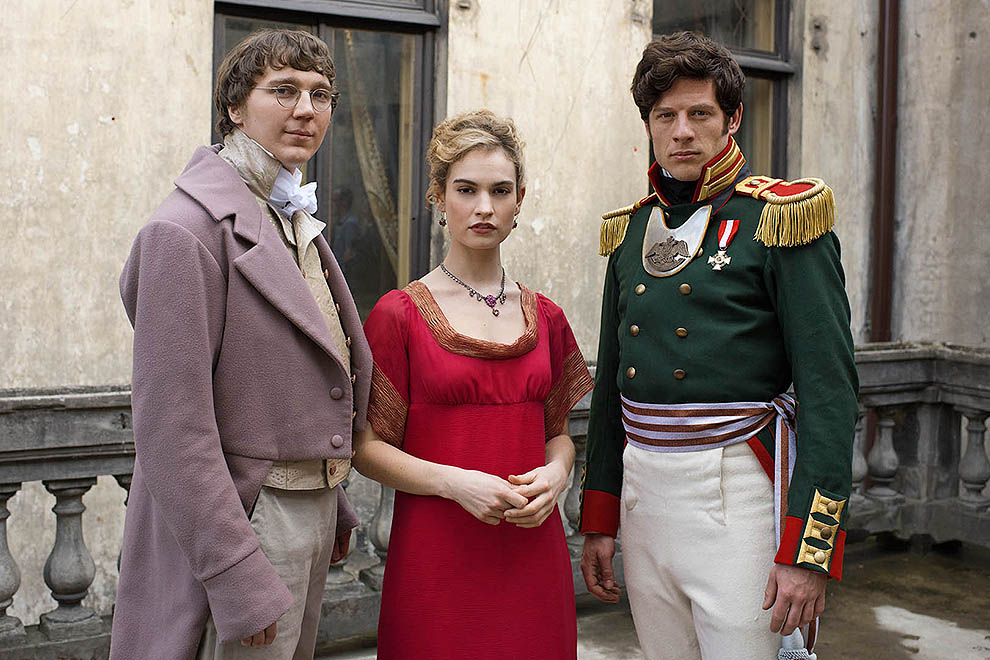 We all know about Pride and Prejudice with zombies, but what about the darker side of Jane Austen’s world? The presence of those red-coated captains who parade through the village of Meryton might seem entirely justified by the urgent local need for partners at the next ball, but what if the story were to be expanded, and with it the controlled microcosm of Jane Austen’s world? What if we followed these men to war and saw the dastardly Wickham rescuing a dismembered comrade in the midst of cannon fire, or one of the young lieutenants skewered with an enemy sabre?

Given the unprecedented success of Andrew Davies’s 1995 BBC adaptation of Pride and Prejudice, any enterprising television producer might be forgiven for speculating along these lines. And when you realise that there is just such a novel, well overdue for a new television adaptation, the road ahead must seem like a highway to even greater accolades. War and Peace has a heroine of irrepressible vitality who melts the heart of a poker-faced aristocrat. It has a ballroom scene in which they dance together, setting the paths of destiny swirling in new and unforeseen directions. But this time war intervenes, and the fate lines darken. All you need is Andrew Davies to write the script.

Before the first episode of War and Peace went to air in Britain in January, the promotions team were already working to create a secondary legend, the story of how it came to be. Once Davies was signed up, the sluice gates of major finance opened: Harvey Weinstein came on board, making international distribution assured. The casting directors assembled a dream team headed by James Norton as Prince Andrei, Lily James (from Downton Abbey, another headline success for the BBC) as Natasha, and up-and-coming American star Paul Dano as Pierre. Other stellar cast members include Gillian Anderson, Stephen Rea, Greta Scacchi and Jim Broadbent.

Previews were aired before a high-profile panel discussion held in Paris in September last year, featuring Davies, Weinstein and executive producer Faith Penhale. Events like these generate an aura of self-congratulation which, with enough chutzpah behind it, can carry right through into the reviews. When the series premiered in Britain in January this year, the critical reception was, by and large, what the producers were expecting, though the ratings on the BBC somewhat embarrassingly failed to pass those of the Antiques Roadshow. Viewers in Australia were able to watch the series on BBC First, but it is now more widely available, on Netflix, iTunes and DVD. Watching it in the aftermath of the hype, we may be in a better position to judge it on its merits.

Opportunistic as it may be, the move from Jane Austen’s novel to Tolstoy’s has a certain historical rationale. Pride and Prejudice was published early in 1813, after the momentous year in which Russian troops clashed with Napoleon’s army at the battle of Borodino, leaving massive casualties on both sides. The Russians failed to prevent the French advance on Moscow and a period of military occupation followed. Russia’s richest families, who had thought their privileged world unassailable, fled their ornately furnished mansions with nothing but what could be carried on a cart.

Much the same illusions prevailed in England at the time. In a talk she gave in 1940, Virginia Woolf highlighted the contrasts between her own situation as a writer in wartime and the circumstances faced by Jane Austen. In spite of Britain’s involvement in the escalating conflict just across the channel, Austen’s world remained neither disturbed nor changed. Suppose the dice had fallen otherwise, and the Bennet family had been forced out of house and home, along with the Bingleys and the Darcys… there would have been a story.

War and Peace, of course, is not that story. It is another story altogether, though this is an inconvenient truth the BBC is not entirely prepared to acknowledge. This is a very English rendition of Tolstoy’s novel, and the efforts to evoke the cultural ethos of imperial Russia serve, if anything, to make that more starkly evident. Composer Martin Phipps worked with the Latvian State Choir to introduce choral elements into the church ceremonies, but the deep bass harmonics seem to belong to a different kind of physicality from that of the actors who form the congregation. In a scene from episode four, Natasha visits a peasant family and begins to dance as they sing a traditional folk tune. Her companions look on in wonder. How does she know this kind of dancing, one asks. “It’s in her blood,” says the other. Quite patently, it is not. Lily James looks like a well-schooled ballet student from Surrey. There is not a shred of raw impulse about her.

The endless close-ups of Natasha’s face turned just slightly over one shoulder are more than enough to persuade anyone she should be on the cover of Vogue. Yes, she is exquisitely cute, but do we need to be made aware of that with such insistence? The improbably handsome James Norton has to work hard not to make Prince Andrei look like the head prefect at an English public school. Although he manages to achieve some gravitas in the battlefield scenes, the designer smudges on his face as he emerges from the fray would not look amiss on the catwalk. A touch of distressed ruggedness is all the rage among the leading fashion houses, and it is through this lens that contemporary viewers will inevitably see him. Paul Dano as Pierre is an oddly counterintuitive piece of casting. Tolstoy’s Pierre is big and ungainly, shortsighted, socially obtuse; Dano is fine-featured, wide-eyed and incessantly photogenic. The physical idealisation of the central trio turns the love triangle into a kind of narcissistic minuet.

Physiognomy and personality are fused in Tolstoy’s characters. Who they are is radically bound up with their material presence in the world. Perhaps the casting directors (Susie Figgis and Julie Harkin) felt it was bold and innovative to go against physical type, and in some instances it does work. Tom Burke, dark-haired and rough-hewn, is very effective as Dolokhov, the gambler, seducer and fighter who spells trouble for anyone who crosses his path. In the novel, he is described as a shapely figure, fair and with clear blue eyes. Tolstoy’s Prince Vassily is bald and his scalp shines – which, for a sycophant who bows all the time, is an unfortunate handicap. On the screen, with his long, curly hair, Stephen Rea is not so evidently marked out as a loser, but he captures the air of the diplomat manqué, reduced to negotiating the social destinies of his family.

The character most critical to any effective dramatisation of War and Peace is Pierre, and here the physical mismatch is a real issue, something that cannot be countered by dressing him in oversized coats and multiple waistcoats. Paul Dano has something ethereal about him. Lightness of presence is his special gift. He was in his element in Love and Mercy as the young Brian Wilson, picking out the notes of “God Only Knows.” And yet it’s Dano who really manages to tap into the core business of Tolstoy’s novel. There is, ultimately, a lightness about Pierre, too. He may blunder around at an elegant soiree or as an unarmed “helper” at the edges of the battlefield, but he is the one who is transparent to the changing realities of a world in turmoil. A chameleon of events, he is marched as a prisoner of war across the snowbound landscape, returns to his mansion in the looted city, then settles as a farmer on his country estate.

The other actor who may be credited with making this series into something more than Pride and Prejudice with war scenes is Brian Cox as General Kutuzov, a scarred old bear of a man who looks too damaged to be of use in a bar-room brawl, but whose military instincts are second to none. Kutuzov led the Russian army through a succession of defensive campaigns against Napoleon, culminating in the Battle of Borodino, and subsequently engineered an effective counterattack by allowing the Frenchman to take Moscow, knowing the invading troops would be starved out in the Russian winter. Cox captures the canniness and the sheer physical solidity of this man, in it for the long haul.

Tolstoy devotes some twenty chapters of War and Peace to Borodino, digressing into an essay on how the chaos of events ultimately makes nonsense of human strategy. When it came to the chaos of war, Tolstoy knew what he was on about. In his early twenties, he had fought in campaigns in the Caucasus and seen the aftermath of atrocities committed by his own side in the Chechen villages. Perhaps there are few people now who want to be bothered with a nineteenth-century thesis on war, but director Tom Harper does some justice to Tolstoy’s grasp of its ironies. A long shot establishes the layout of the battlefield on the eve of engagement, troops on horseback arraigned with the formal design of a grand tableau. Then there is the havoc, in close-up, with dismembered bodies strewn in all directions, and the voices of those still half alive wailing through the smoke.

Alongside my copy of War and Peace in the bookshelf is the slim volume of Hadji Murad, Tolstoy’s novella about the Chechen warrior of that name. It’s a stunning piece of work, written in one fully realised scene after another, as if foreshadowing the medium of television. Maybe if enterprising producers could step away from the lures of the most obvious masterpieces, they might see the potential in this. •

Jane Goodall, Inside Story’s TV writer, is an Adjunct Professor with the Writing and Society Research Centre at Western Sydney University

Watching and being watched: the September 2014 People’s Climate Marches in major cities (including Berlin, above) became the largest rallies in the history of climate campaigning. mw238/Flickr 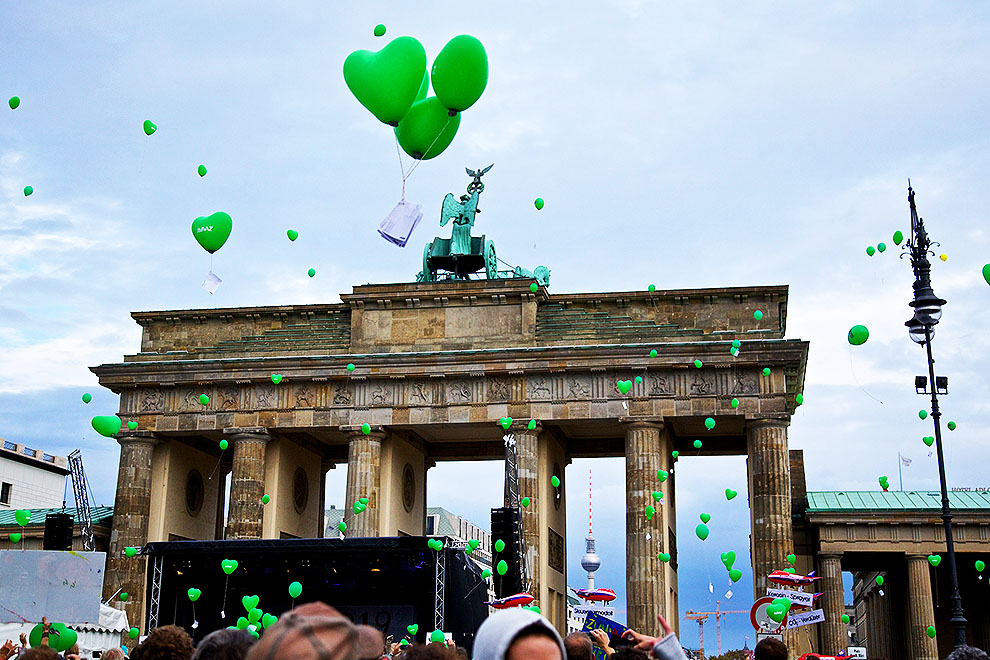 Watching and being watched: the September 2014 People’s Climate Marches in major cities (including Berlin, above) became the largest rallies in the history of climate campaigning. mw238/Flickr