Putting the numbers back into the immigration debate

Drastically reducing net migration would be neither easy nor wise, says a former senior official 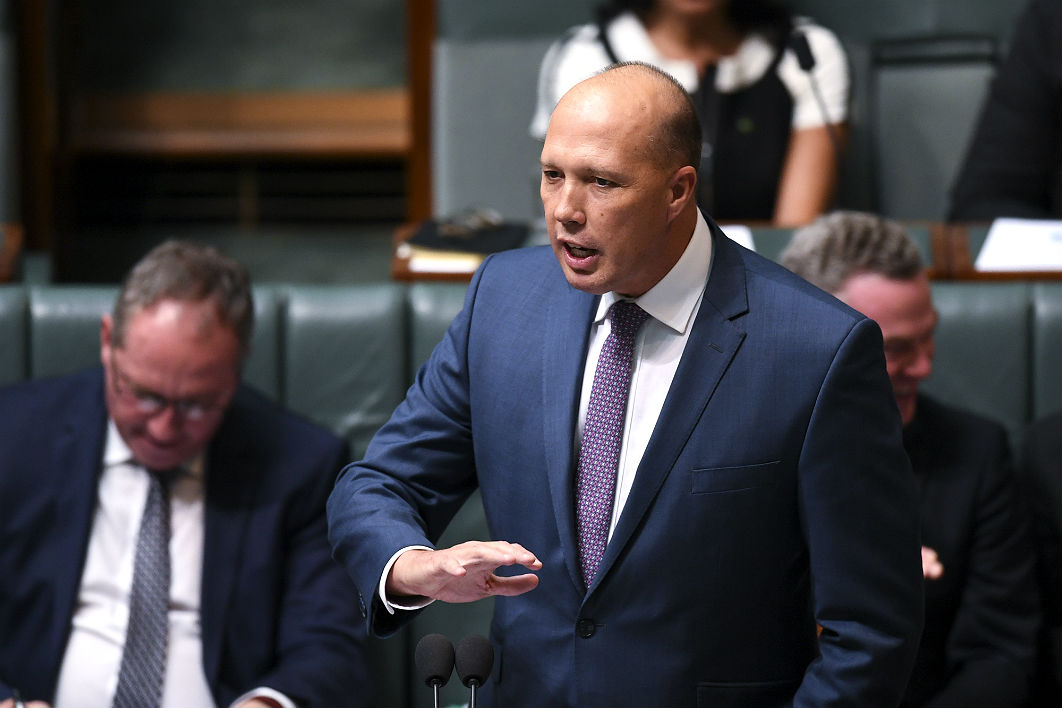 How governments manage migration is a big deal. A perception of too many arrivals drove the Brexit result in Britain, helped define the Trump presidency, and fuelled the rising populist vote in Europe. Japan’s ageing population is driving its government to increase immigration — but ever so cautiously, recognising the likely backlash from its largely homogeneous population. And the same demographic forces have driven China to try to attract back part of its huge diaspora.

The Australian debate, despite our long immigration tradition, is every bit as tortured and poorly informed. Until very recently, this wasn’t helped by the Turnbull government’s eerie silence on immigration levels and population policy. Immigration minister Peter Dutton’s tentative foray late last week should therefore be welcomed.

Given the complexities, though, immigration ministers have an obligation to be accurate with the data and honest about the implications of significantly reducing the intake. Dutton was neither. He said that the Coalition had already “considerably” reduced the number of people entering Australia — by 100,000 compared with when Labor was in government. “And if we have to bring it back further,” he went on, “if that’s what [is] required and that’s what’s in our country’s best interests… that is what we will do.”

The minister would know very well that governments can no longer simply turn migration on or off like a tap.

If the minister was referring to the size of the migration and humanitarian programs, then his department’s website shows he was wrong — these programs have not been reduced by 100,000. Indeed, the Coalition has maintained the migration program at near record levels (around 190,000 per annum) for a number of years. Humanitarian numbers for 2016–17 are likely to have been among the highest in our history.

He was more likely referring to the level of net migration: arrivals minus departures. But even here his statement is misleading. Net migration began rising rapidly during the latter years of the Howard government. Because it takes a number of years to adjust immigration levels, that momentum carried forward into the first years of the Rudd government. Net migration peaked in 2008–09 at 299,870 (with the increases driven mostly by overseas students) but fell significantly to 180,370 in 2010–11 and 229,410 in 2011–12. Since then, net migration has averaged around 206,000 per annum.

More significantly, however, net migration reached 245,400 in 2016–17, an increase of over 50,000 on 2015–16. This was one of the largest single-year increases in Australia’s history. Once again, it was driven largely by a surge in overseas students. As the economy strengthens, net migration may rise further and — if current policy settings are maintained — it could well reach the record levels of 2008–09.

Peter Dutton also said there may be a case for cutting immigration to reduce pressure on infrastructure. To have any real impact, though, the cut would need to be very large indeed, and would need to be sustained for many years. The minister would know very well that governments can no longer simply turn migration on or off like a tap.

In theory, recent changes by the Turnbull government — replacing the 457 skilled temporary entry visa with a more restrictive visa, and increasing taxes on working holiday-makers — should reduce migration. Yet 2016–17 still saw an increase of 50,000, and we will possibly see even more in 2017–18 as the economy strengthens and universities seek to offset the impact of funding cuts with more revenue from overseas students.

These increases are taking place while the formal migration and humanitarian programs remain largely unchanged. To understand why, we need to be aware that even when numbers in those programs are held constant, according to the department’s figures, the level of net migration reported by the Australian Bureau of Statistics can fluctuate significantly. The department simply counts the number of permanent resident visas issued (including to people already in Australia); the ABS counts both permanent and long-term arrivals and deducts departures.

The government doesn’t cap most of the numbers that make up net migration, including the arrival and departure of Australian and NZ citizens, overseas students and skilled temporary entrants. It leaves these categories open for good reason — they are driven by the short-term needs of the labour market (though overall government policy also reflects lobbying and other pressures).

In the eight years to 2008–09, for example, net migration surged from about 100,000 to 300,000 a year. The strength of the labour market and growing concerns about a declining fertility rate led to new policies designed to accelerate the arrival of skilled and semi-skilled workers and overseas students.

Most of these changes were driven by the Howard government. It abolished labour-market testing — which required employers to show they had searched thoroughly for a domestic worker before hiring a skilled temporary worker from overseas — in favour of a strict minimum salary requirement. It also opened more pathways for overseas students to secure permanent residence.

After the global financial crisis, the Rudd and Gillard governments tightened immigration policies (apart from asylum seeker policies, which they relaxed) and net migration fell to about 200,000 a year. But the latest ABS preliminary estimate for 2016–17 has the figure growing to 245,400, mainly because of a surge in overseas students.

As the economy has picked up in recent months, the labour market has tightened considerably, and is forecast to tighten further through 2018. We should get ready for complaints from employer groups about skill shortages, as happened during the second half of the Howard government. Already the Business Council of Australia has been vocal on this issue and nurse employer groups are forecasting shortages. The technology industry is grumbling about a lack of ICT workers, and complaints about other shortages cannot be far away.

Pressure will intensify for the government to unwind the restrictions on skilled temporary migrants announced last April. Farmers will complain about not being able to get fruit picked; building, infrastructure and mining companies will demand more migrants to counter excessive wage demands, despite their skyrocketing profits. Even a partial accommodation of these demands will increase net migration significantly. In fact, it will rise anyway as employers look for other ways to secure the workers they need — by bringing them in on other short-term visas, for instance, and then applying for change of status.

As the complaints become more shrill and net migration booms, an old pattern will reassert itself. Australians will wonder why governments and businesses don’t train more young Australians for these jobs. The federal opposition will blame the government for cutting funding for training and promise to do better if it is elected. Business leaders will avoid questions about why they no longer invest adequately in training young Australians, preferring to blame governments while pleading for changes to skilled temporary entry policies.

Against this background, reducing net overseas migration to around 70,000 a year, as Dick Smith and others have suggested (in effect a reduction of about 175,000 from the 2016–17 level) or reducing the migration program from 190,000 to 110,000, as former prime minister Tony Abbott has suggested, would require the government to do some or all of the following:

● Restrict the right of Australians who marry a foreigner to live with him or her in Australia. While the number of applications in that part of the queue is at a record level, the government is slowing processing to keep numbers within its “planning levels.” Reducing the numbers further would require highly controversial legislation that gives government the power to further limit numbers.

● Close pathways for overseas students to extend their stays in Australia, and tighten student visa policy to prevent further growth in numbers (the number of overseas students currently in Australia is around 500,000 and growing strongly). The international education industry is now Australia’s third-largest export earner and directly employs over 130,000 people. Significant changes in education funding would be needed if the government were to tighten student visa policy.

● Further restrict the pathways to permanent residence after arrival for skilled temporary entrants, and close points-tested skilled-migration categories. Here, the problem is that research consistently shows that these two categories deliver significant economic and budgetary benefits. Many Australian industries rely heavily on these migrants — including health and aged-care services, which desperately need more skilled workers, and the many Australian businesses that need more ICT service and support workers.

● Close Australia’s offshore humanitarian program. Fewer than 15,000 refugees and others come through this program every year, however, so this change would contribute little to reducing new migration while destroying international respect for Australia’s role in dealing with the global refugee crisis. Similarly, further restrictions on parent, dependent and adopted child migration would make only a minor contribution to the reductions being sought.

● Curtail the right of New Zealand citizens to remain in Australia on a long-term basis. This would require a renegotiation of the Trans-Tasman Travel Arrangements, under which Australia already treats New Zealanders in Australia much more harshly than New Zealand treats Australians living in New Zealand.

Both Treasury and the Productivity Commission have consistently found immigration to have a positive economic and budgetary impact, especially because much of Australia’s annual intake involves people who must pay the full rate of tax but who are severely restricted in their access to a range of government services and benefits. A significant reduction in net migration would undoubtedly have a negative impact on Australia’s economy and budget.

History tells us that net migration can fall quickly during a recession. It plummeted from 140,000 in 1969 to 13,500 in 1975, and from 173,000 in 1988 to 35,000 in 1993. This is likely to happen again during the next downturn, at which point we will be thrown into a different debate. A significant and sustained fall in numbers would accelerate the rate at which Australia’s population ages; a quick look at Japan’s economy gives an insight into what that can mean.

Many older Australians will remember that the first people to be laid off when these recessions hit were newly arrived migrants. As most migrants now have a two-year wait for access to social security — which the government is proposing to increase to three years — many newly arrived migrants will be forced to return home or migrate elsewhere to survive. If they don’t have the money to go home, they will become destitute in Australia. With the number of temporary entrants — students, working holiday-makers and temporary workers — now much higher than during previous downturns, a much larger number of people will be affected. To avoid this happening, policy-makers need to be preparing a response now.

Will immigration be the big issue in Australia’s next federal election? Tony Abbott, Pauline Hanson and Dick Smith would certainly like it to be. Yet most people who discuss the subject in public fail to understand the profound change the program has undergone over the past twenty years or the demographic circumstances we face over the next twenty.

Overall, the changes have worked well, helping to support a strong economy and to maintain social cohesion. They have ensured that the Australian population is ageing much more slowly than all other major developed economies, with the economic and budgetary benefits this delivers. Debate about immigration is not necessarily a bad thing, but it needs to be based on facts if we are to escape the divisive conflicts consuming Europe and the United States. ●