Quotas for the Liberal Party?

Judith Troeth is trying to persuade Liberals that the presence of more women in the parliamentary party will mean a larger pool of talent for ministerial and leadership positions, writes Marian Sawer 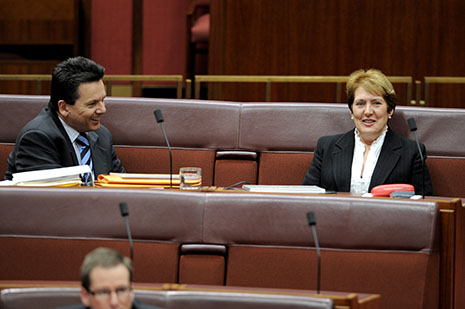 Senator Judith Troeth sits with independent senator Nick Xenophon during the vote on the Migration Amendment Bill in September last year. Senator Troeth had crossed the floor to vote with the government. AAP Image/Alan Porritt

VICTORIAN Liberal Senator Judith Troeth is a brave woman. In 2005 she was part of the group led by Petro Georgiou MP that forced the release of women and children from immigration detention. In late 2009 she crossed the floor to support ending the mandatory billing of asylum seekers for detention – a policy that had resulted in unpayable debts and a lifetime penalty for some asylum seekers. This year she has been a vocal critic of opposition leader Tony Abbott’s policy of reinstating offshore processing and restoring temporary protection visas.

Senator Troeth was also one of the four women senators, each from a different party, who co-sponsored the 2006 private member’s bill that removed the ministerial veto over the importation of the “abortion pill” RU486. The veto had been in place for ten years and was a legacy of an agreement between the Howard government and independent Senator Brian Harradine. Its removal was a unique cross-party venture, made possible by the increased presence of women in the federal parliament. The bill was overwhelmingly supported by women in the Senate (twenty-four to three) but only by a minority of men (twenty-one to twenty-five). It was Senator Troeth who persuaded John Howard to allow Liberals a conscience vote, paving the way for the bill’s success. She was less successful with another private member’s bill, intended to prevent misleading advertising of pregnancy counselling. Again sponsored by women senators from four different parties (now including the Greens rather than the Nationals), that bill ran aground in the Liberal and Labor party rooms.

On 23 June, the day before Julia Gillard became prime minister, Senator Troeth released a policy paper with the appropriately unthreatening title, “Modernising the Parliamentary Liberal Party by Adopting the Organisational Wing’s Quota System for Preselections.” The contents, however, are bound to be controversial. According to the paper, it is illogical for the Liberal Party to reject quotas for preselecting election candidates when it has always accepted them for the organisational side of the party – particularly in Victoria, where half the positions up to and including metropolitan and rural vice-presidents are reserved for women. (Not that organisational quotas were a disinterested gift to women: they were the price exacted in 1944 by the well-organised Australian Women’s National League for its merger in the new party.)

With the support of Liberal leader John Hewson, the cause of women within the party was advanced in the early 1990s with the creation of the Liberal Women’s Forum, which was credited with the surge of Liberal women entering the federal parliament in 1996. But despite the best efforts of leading Liberals such as Chris McDiven (NSW president and then the first woman to be federal president of the party), momentum was quickly lost under the Howard government. The number of Liberal women candidates for the House of Representatives dropped and Labor regained the lead in terms of number of women in the House. Today, across all Australian parliaments, 37 per cent of Labor parliamentarians are women but only 23 per cent of Liberal parliamentarians.

Senator Troeth has been sitting in the Liberal party room watching with dismay as things have gone backwards. Women have been successful in only two of the fourteen recent preselections in Victoria for new federal candidates. When told that it is “demeaning” for women to be selected on anything other than merit she responds by saying that it is demeaning to sit in the party room and see the number of women fall.

In 2008 David Kemp’s review of the Victorian party found that women candidates for preselection were being asked questions about how they would manage family responsibilities. Although Kemp described such questions as unacceptable, they are still being asked. Women continue to believe that they can’t win preselections on merit and that they are judged by different standards. In Britain the Conservative leader David Cameron found that women candidates were still forced to “jump barriers far higher than the men” and tried to introduce all-women shortlists as part of modernising the party.

Traditionally the Liberal Party has eschewed electoral quotas on the ground that they “patronise” women. Senator Troeth freely admits she hasn’t always believed in them. In the past she favoured support networks for women candidates, like the Liberal Women’s Forum. Now she believes that quotas may be the only way to bring the party into the twenty-first century. She wants the Victorian party to change its constitution to introduce a quota system whereby women would be preselected for a minimum of 40 per cent of federal seats.

Troeth is working to put quotas on the agenda of Liberal women in Victoria in the hope they can gain the two-thirds majority needed to change the party’s state constitution next year. Given entrenched resistance to electoral quotas on the conservative side of politics, it is unlikely she will be successful. In Britain, David Cameron’s attempt to introduce all-women shortlists ran into furious opposition, as did the compromise of requiring equal numbers of men and women on shortlists. In Victoria, questioning why the party accepts organisational quotas but spurns electoral quotas will certainly not be enough. But Senator Troeth has made a characteristically brave start.

Marian Sawer is Emeritus Professor in the School of Politics and International Relations at ANU.