Six months after he was swept from the presidency, Mahinda Rajapaksa has launched a bid for the prime ministership. But his successor is fighting back, writes Alan Keenan 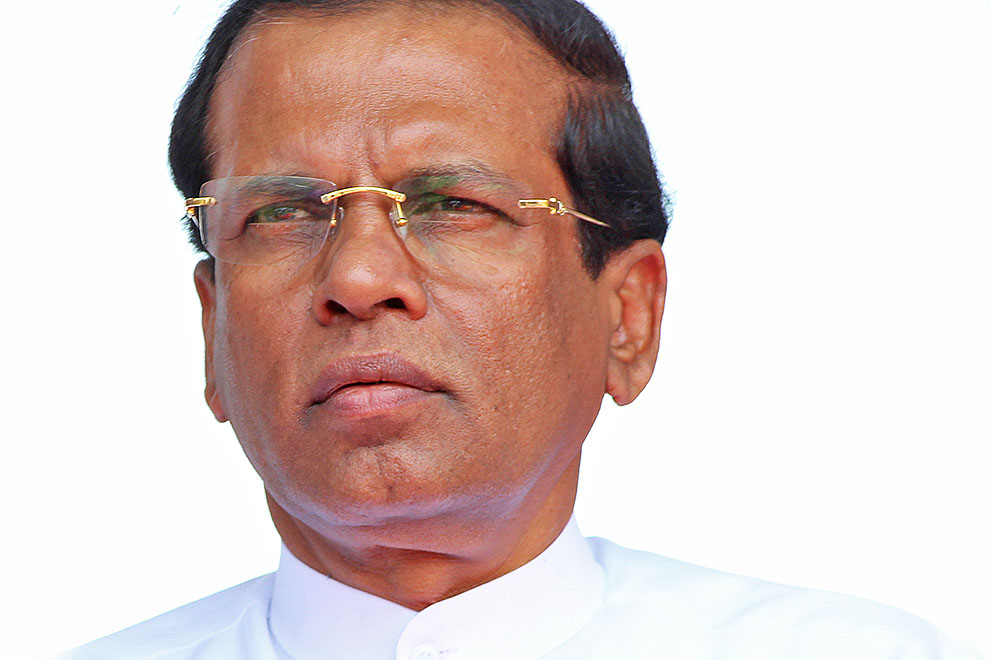 The re-emergence of Sri Lanka’s charismatic former president, Mahinda Rajapaksa, as the leader of the main opposition alliance in the country’s general elections in August, and as a would-be prime minister, has transfixed Sri Lankan voters and political observers and appeared to threaten the country’s democratic honeymoon.

Six months after his stunning victory in Sri Lanka’s presidential election, Maithripala Sirisena faces a renewed challenge from the man he ousted. Sirisena’s triumph gave new life to Sri Lanka’s battered democracy, which had suffered under Rajapaksa’s authoritarian and nepotistic regime. Rajapaksa’s return to parliament with a significant degree of support could put continued political reforms and chances for ethnic reconciliation under serious pressure.

Risking his career, Sirisena left his position as health minister and general secretary of the ruling Sri Lanka Freedom Party, or SLFP, in November 2014 to head a combined opposition campaign led by the United National Party, or UNP, to unseat Rajapaksa. Running on promises to root out corruption and re-establish the rule of law, Sirisena won a large portion of the Sinhala majority’s vote, and overwhelming support from minority Tamils and Muslims.

Since coming to power, he has moved away from Rajapaksa’s narrative of Sinhala nationalism – which underpinned the government’s brutal 2009 victory over the Tamil Tiger insurgency – and returned power to the office of the prime minister and parliament. He has also taken tentative steps to rebuild relations with minorities by addressing some of their longstanding grievances.

Still, the political, ethnic and religious wounds that split the country remain largely unhealed, and the unfulfilled reform agenda is long. This includes not just accountability and the need for a negotiated settlement of ethnic divisions, but also a comprehensive plan for demilitarisation, a determined drive to bring the scores of major corruption investigations to completion, and further reforms to rebuild Sri Lanka’s heavily politicised justice and policing system.

In a 1 July speech announcing his candidacy, Rajapaksa called on “patriotic forces” to protect “the motherland.” He accused Sirisena’s UNP-led government of undermining national security, supporting terrorists and ruining the economy. These have been the themes of a series of large rallies throughout Sinhala-majority areas of the country since mid February, which have called on Sirisena to bring back Rajapaksa as prime minister. Rajapaksa remains popular with large numbers of Sinhala voters, particularly in rural areas.

Within days of his victory in January, Sirisena took over leadership of the SLFP from Rajapaksa and also gained leadership of the SLFP-led coalition, the United People’s Freedom Alliance, or UPFA. But despite substantial concessions, he never gained complete control over either group, most of whom see a return of Rajapaksa as their only chance to prevent a landslide UNP victory in August. Sirisena has struggled to hold the party and UPFA together while blocking Rajapaksa from returning to parliament with either the SLFP or the Alliance.

The announcement on 3 July that the UPFA had decided to nominate Rajapaksa as a candidate shocked and disappointed Sirisena’s supporters, and appeared to signal Sirisena’s capitulation in his battle with Rajapaksa. Political momentum was clearly with Rajapaksa.

Ending his long and worrying public silence on 14 July, however, Sirisena struck back. He reiterated his opposition to Rajapaksa’s candidacy, predicted his defeat, and made clear he had no intention of appointing Rajapaksa as prime minister, even if the UPFA wins a parliamentary majority. Rajapaksa’s hopes of returning to power were also dented when the UNP reconstituted much the same broad coalition that defeated him in January. The newly formed United National Front for Good Governance brings together a wide range of political parties from across the political and ethnic spectrum, including some of Sirisena’s supporters in the SLFP. With the UPFA running an almost entirely Sinhala slate of candidates, the election looks set to be a referendum on the continued strength of Rajapaksa’s hardline brand of Sinhala nationalism.

The appeal of Sinhala nationalist ideas and the continued popularity of Rajapaksa have considerably limited Sirisena’s boldness during his first six months in office. In the last parliament, which Sirisena dissolved on 26 June, pro-Rajapaksa UPFA legislators were able to block many of Sirisena’s initiatives. Their resistance watered down what is still Sirisena’s chief achievement to date, a constitutional amendment reducing the powers of the presidency.

Fear of upsetting nationalist sentiments and giving Rajapaksa and his allies political ammunition has meant Sirisena’s gestures on reconciliation with Tamils – returning land held by the military and reducing its role in Sri Lanka’s north and east; releasing political detainees; investigating the thousands who disappeared during the course of the war – have been partial and ad hoc.

To avoid inflaming Sinhalese opinion and angering the powerful military, Sirisena and his allies in the UNP have also held off announcing plans for the domestic accountability mechanism for alleged war crimes that they promised both voters and the United Nations. A report from a UN inquiry into the allegations, postponed by the UN Human Rights Council in February at the new government’s request, is due to be released by early September. Rajapaksa and his allies flatly reject any suggestion of accountability or cooperation with the United Nations, and the subject is likely to feature as a key issue of the campaign.

Following Sirisena’s belated counterattack against Rajapaksa, the UNP-led coalition looks most likely to win a working majority and to form the next government. Even without securing the prime minister’s office, however, Rajapaksa’s leadership of a strongly Sinhala nationalist bloc in parliament could exacerbate communal divisions and pose a challenge to further reform. At the same time, failing in his bid for prime minister could considerably damage Rajapaksa’s mystique, and with it his political strength.

Whatever happens, Sirisena’s first six months in office have proven just how entrenched Sri Lanka’s postwar challenges are. Hopes for January’s democratic “revolution,” especially in the community, were always overblown. But with Sirisena’s renewed commitment to the principles of his January victory, and some luck, the possibility of slow, incremental progress remains. •

An earlier version of this article was published by the Lowy Interpreter.