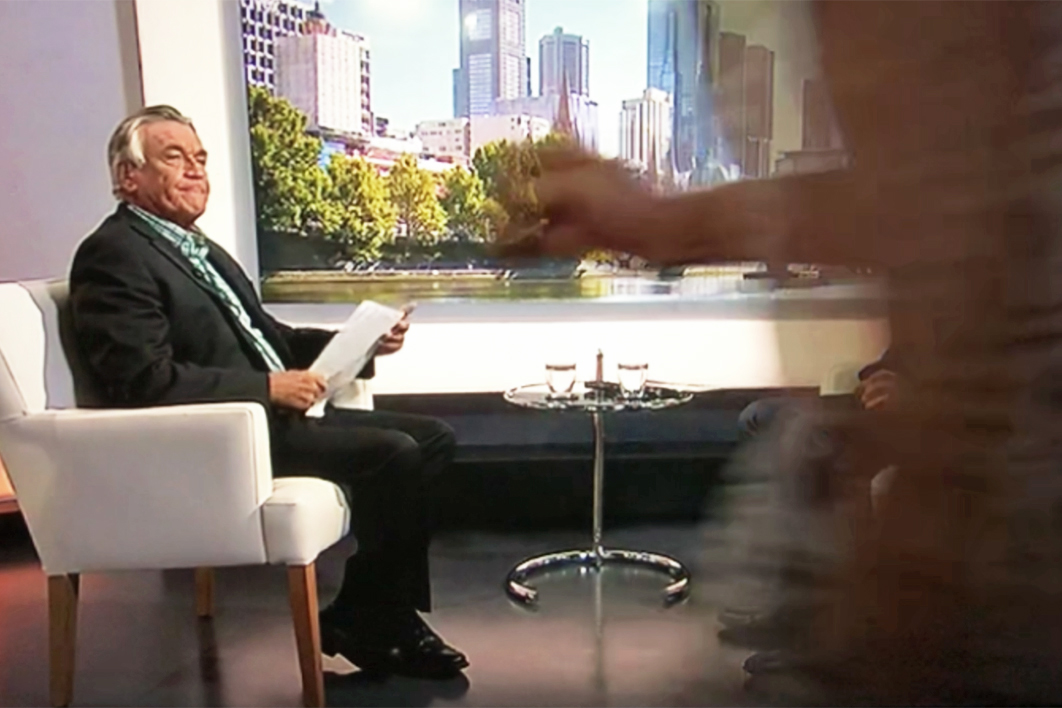 Crashing in: host Barrie Cassidy during the incident on Sunday’s Insiders.

“Reality is when the ceiling falls in on your head,” said Viktor Shklovsky, reflecting on the early phase of the Bolshevik revolution. Reality of a kind came crashing in on the ABC’s Insiders last weekend when a cameraman collapsed on set in the midst of its first outing of the year.

Barrie Cassidy and Bill Shorten, who was being interviewed at the time, went off-script to express their concern, but somehow the incident served as a curious reprimand: a reminder that this whole exercise of political dialogue sits outside a world in which real things happen to real people.

In a brilliant video montage earlier in the program, clips of Scott Morrison pitching his message for the coming election were intercut with Labor MP Brendan O’Connor commenting, “It’s an absolute fairytale” and Jim Chalmers saying, “He’s from another planet.” Reality of another kind, though, was about to hit.

Cassidy’s first questions to Shorten concerned the imminent release of the report from the banking royal commission. Wasn’t there some justification for the government’s concern that punishing the banks too severely might cause credit to dry up? “There they go again, the government,” said Shorten. “They already sound like they’re back-pedalling on making the banks accountable.” It was intended as a laid-back, cynical response, but he got the tone wrong. It looked as if he’d rehearsed it in front of a mirror.

Shorten’s strength in interviews is that he’s always well prepared; he gives substantive, coherent responses to even the most adversarial questions. Here he was in the easy seat, with an opportunity to score some real hits against a government that had wedged itself between a rock and a hard place. But where Keating would have been spinning the butterfly knife, Shorten seemed to have trouble getting a grip on the cudgel.

The panel for this episode — Katharine Murphy, Peter van Onselen and Laura Tingle — had a scattergun’s range of issues to discuss. Aside from the crisis of confidence triggered by the banking royal commission, there was the surge of independent candidates for the coming federal election and vexed questions about offshore detention, tax and whistleblowers.

These are three of the sharpest insiders in the business and they are never less than intelligent, but they suffer from a syndrome that dogs the program as a whole: they are caught up in the limited circuits of the inner political arena. There are times when one longs for a commentariat capable of panning back, taking a greater critical distance and offering some perspectives on the principles driving the political agenda, rather than wrangling about how it will play out in the electorate.

Why are political commentators so obsessed with trying to predict things, when they are uniquely bad at it? I went back through some past episodes of Insiders to see how some of the judgement calls have stood the test of time.

The 9 October 2016 program, for instance, featuring Murphy, Chris Uhlmann and Phillip Coorey, began with a discussion of the Trump presidential campaign following the release of the tape in which he boasts about groping women. The consensus was that this was the end for him, and a Clinton presidency was more or less assured — a consensus that helped shape wider expectations about the election.

In the same program’s discussion of recent parliamentary committee testimony by the major banks’ chief executives, all the panellists were cynical about protestations of contrition and all were firm in the view that there were more serious matters to deal with. (Cassidy quoted John Cleese’s quip that 99 per cent of bankers give the 1 per cent a bad name.) But none of them picked this for what it was — the first phase of a major debacle, and a scenario from the endgame of neoliberalism. None was prepared to comment on the ideological underpinnings of an economic culture gone toxic, or to recognise that this is what we were really witnessing. They still saw it primarily as a party-political stoush. As for the outcome of the hearings, both parties would take from them what they wanted, said Coorey. Murphy agreed: in terms of politics, it didn’t disturb the equilibrium.

Maintaining the equilibrium after a bad wobble was essentially the approach taken by The Drum following the release of the Hayne report on Monday. Ellen Fanning, in the chair, set the tone: “What was it that frittered away our trust?” Frittered away? Following the revelations elicited by the commission, trust is as dead as the fish in the Murray-Darling.

In its new hour-long format, The Drum had an opportunity to deal with this as a major turning point in our economic culture. Four Corners/Fairfax journalist Adele Ferguson, who won the Gold Walkley for her story on corruption in the Commonwealth Bank in 2014, appeared in edited footage at the start of the program. Why was she not on the panel? Given that the producers had advance notice of when the report was to be released, why did they not move heaven and earth to get her?

Instead, we had ABC business editor Ian Verrender assuring us that society relies on greed, and we all benefit from the way greed drives competition, but that something needs to be done when it reaches extreme levels. Investigative reporter Caroline Overington, who won a Walkley for breaking the story of the Australian Wheat Board kickbacks to the Iraqi government, here seemed to be fighting shy of the larger implications. “If you let this idea catch on, that the banks are not to be trusted,” she said, “we are in for a world of pain.” That’s a statement about five years out of date.

Reality still hadn’t fully caught up on 7.30, where Leigh Sales appeared standing in front of a screen headlined “Trust Deficit.” Laura Tingle, who had the job of summarising the royal commission’s findings, opened strongly: “The unconscionable, corrupt and sometimes unlawful behaviour of our financial sector has not just destroyed the lives of thousands of customers, but dragged down the reputations of some of our most senior business figures and sucked our political leaders into the vortex too.”

Well, that does indeed just about sum it up, but what about the causes? The failure of the regulators is a major part of the picture, as it was in the global financial crisis of 2008. Commissioner Hayne has not done anything that would radically reshape the financial system, as Tingle observes, or change the structure of regulators. No cases have been referred directly to the DPP.

Treasurer Josh Frydenberg, interviewed from Parliament House, again faced the question of why he and his Coalition colleagues had opposed the commission. “We can debate for hours, Leigh,” he began, “but what Labor have…” Sales cut him off, and went to the issue of trust. Determined to get on the front foot, Frydenberg stressed that action would be taken on all seventy-six recommendations. What would he do about ASIC? There has been a change in approach and leadership, he said. “We’ll keep a watching brief.” And he proceeded to expand on how vital the banking system is to our economy and our way of life.

All this sounds too much like a replay of how the global financial crisis was allowed to roll through without any drastic consequences to those who caused it. “Too big to fail.” “Too important to lose.” The public are again portrayed as helpless dependants who must wind back the frustration, cop the losses and hope that business as usual is resumed as soon as possible. And the government’s reaction is to ignore the crash and the hole above their heads, and offer assurances that the plaster will be swept up — or at least some of it.

What is the role of political discussion programs on the national broadcaster? The Drum and 7.30, with ABC news between them, now occupy a continuous two hours of evening television. There’s a risk of repetitive treatment of major news items, and unless one or other of these programs can break the mould and offer a more challenging approach to analysis and discussion, I don’t see how the arrangement can be sustainable. •