Keynes’s book on the Versailles Treaty not only predicted dire results, but also provided guidance for those planning the global economic system following the second world war 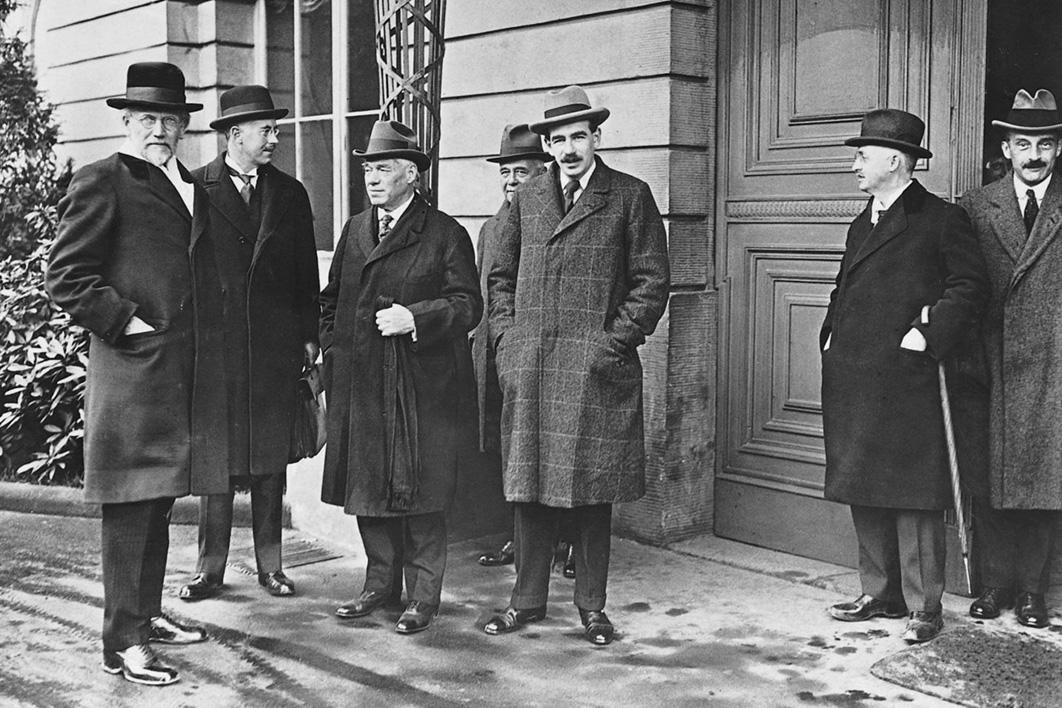 George Santayana and Winston Churchill are remembered for warning that those who fail to learn the lessons of history are doomed to repeat their errors. The economist John Maynard Keynes failed to prevent mistakes being made at the Versailles conference following the first world war but ensured that its lessons were recognised after the next great conflagration.

Keynes’s The Economic Consequences of the Peace, his denunciation of the Versailles Treaty, was published on 12 December 1919 and became an immediate bestseller, translated into a dozen languages. Never out of print, it has just been released in a new edition, benefitting greatly from a comprehensive introduction by Michael Cox of the London School of Economics.

Keynes, who had been a senior member of the British delegation, gave an insider’s view of the peace conference. He was also a member of the Bloomsbury group of British intellectuals, one of whom recalled that the treaty outraged Keynes’s sense of humanity. He quit his post and retired to an English farmhouse with his Bloomsbury friends where, over a period of two months, he wrote the polemic that would transform him into the world’s first celebrity economist.

The book’s serious discussions of economics and international relations was enlivened by vignettes of the leading personalities. In this, he was influenced by his Bloomsbury friend Lytton Strachey, whose iconoclastic Eminent Victorians had been published the previous year. British prime minister David Lloyd George, Keynes wrote, was a “femme fatale… with six or seven senses not available to ordinary men,” able to manipulate the “slow‑minded and bewildered” American president Woodrow Wilson. French prime minister Georges Clemenceau was “a very old man conserving his strength for important occasions.” As Keynes later put it, “words ought to be a little wild, for they are the assault of thoughts upon the unthinking.”

Keynes viewed the treaty as “abhorrent and detestable,” both morally wrong and foolish. By crippling the economies of the defeated powers, the victors would diminish their own living standards and threaten future prosperity. “Moved by insane delusion and reckless self-regard,” he explained, the German people had “overturned the foundations on which we all lived and built.” Yet the victors, he argued, “run the risk of completing the ruin, which Germany began, by a Peace which, if it is carried into effect, must impair yet further, when it might have restored, the delicate, complicated organisation, already shaken and broken by war, through which alone the European peoples can employ themselves and live.” They might “invite their own destruction also, being so deeply and inextricably intertwined with their victims by hidden psychic and economic bonds.”

Nor was Keynes concerned solely with the immediate consequences of what he called a “Carthaginian Peace.” Resentment arising from the severe punishment imposed upon the German people could, he believed, sow the seeds of another war. “If we aim deliberately at the impoverishment of Central Europe,” he wrote, “vengeance, I dare predict, will not limp. Nothing can then delay for very long that final civil war between the forces of reaction and the despairing convulsions of revolution, before which the horrors of the late German war will fade into nothing, and which will destroy, whoever is the victor, the civilisation and the progress of our generation.”

Keynes then asked, in prose of extraordinary eloquence and power, “must we not base our actions on better expectations, and believe that the prosperity and happiness of one country promotes that of others, that the solidarity of man is not a fiction, and that nations can still afford to treat other nations as fellow-creatures?”

The book was well received in Britain. The Economist called it “brilliantly presented, and closely and lucidly argued in great detail.” The Manchester Guardian commented that “if many economists had his wit, his eloquence, his easy address in stating and analysing confused and intricate problems, their science would never have been called dismal.” In Australia, economist R.F. Irvine, writing in the Sydney Morning Herald, was particularly impressed by its “high literary quality” and “moral fervour.” (It was also well reviewed by economists in neutral Sweden, but less warmly in France and the United States.)

Sadly, though, Keynes’s warnings went unheeded. Leonard Woolf dubbed the author “Keynessandra,” and Keynes would later employ the same analogy, describing his writings as “the croakings of a Cassandra who could never influence the course of events in time.”

But he had a second chance. His experience at Versailles undoubtedly explained his determination to play a central role in the planning of the world economy after the second world war. Even before the outbreak of war, his articles in the Times devoted to the economics of war finance — later published in How to Pay for the War — provided not only a non‑inflationary plan for funding it, but a strategy to avoid excessive debt thereafter.

He began to focus more sharply on postwar reconstruction after being shown a copy of the plans for a “New Order” prepared by Dr Walter Funk, the German Foreign minister, to be implemented after Germany won the war. In November 1940, in a draft reply to Funk’s “New Order,” Keynes “assumed that, this time… after the war is over we shall not continue starvation and unemployment as an instrument for enforcing our political settlement.” He added, “I cannot see how the rest of Europe can expect effective economic reconstruction if Germany is excluded from it and remains a festering mass in their midst; and an economically reconstructed Germany will necessarily resume leadership. This conclusion is inescapable, unless it is our intention to hand the job over to Russia.”

Keynes emphasised that the British government was “determined not to make the same mistake again.” The allied countries “must make it our business, above most other purposes, to prevent the starvation of the post-armistice period, the currency disorders throughout Europe and the wide fluctuations of employment, markets and prices which were the cause of so much misery in the twenty years between the two wars.”

Beyond the immediate ending of the war, Keynes proposed “the establishment of a system of international exchange which will open all our markets to every country, great or small, alike, and will give equal access for each to every source of raw material which we can control or influence, on the basis of exchanging goods for goods. We pledge ourselves to radical remedies for our own unemployment and to assist the same object in all other countries.”

Though he conceded that the process of reconstruction would not be easy, he was confident that “we have learnt the lesson of the interregnum between the two wars; and we know that no escape can be found from the curse which has been lying on Europe except by creating and preserving economic health in every country.”

Throughout 1941, Keynes developed a plan for the centrepiece of his planning for the postwar era, an International Clearing Union. Instead of countries clearing their external credits and debits with payments in gold and internationally accepted currency, such as sterling or the US dollar, he proposed the creation of a new unit of account, which he called Bancor. The central banks of member countries forming the Clearing Union would be allocated Bancor on the basis of their international trade before the war. To avoid running up excessive credit or debit balances, creditor countries would revalue their currencies, while debtor countries could devalue. Here, he set out to ensure that both shared in the adjustment process, rather than debtor countries being forced to accept the entire burden, as had usually been the case.

A rival plan, known as the Stabilisation Fund, was prepared at the same time by a US Treasury official, Harry Dexter White. In this plan, member countries would be required to contribute to an international fund on the basis of their pre-war trade. The burden of adjustment would fall largely on the debtors, though in later versions of the plan, they would be permitted to devalue their currencies within tight limits. Countries in deficit would have drawing rights on the Fund, but persistent deficits were to be resolved by deflationary measures. Both Keynes and White also recommended special arrangements for funding loans for development programs. At Bretton Woods an International Bank (later known as the World Bank) was established for this purpose.

Three years elapsed between the preparation of the initial drafts of the Keynes and White plans and the agreement in July 1944 by forty-four nations meeting at Bretton Woods, New Hampshire, to create an International Monetary Fund and International Bank. In the result, the new international institutions resembled more closely the plans of White than Keynes. Lord Halifax, a former foreign secretary, quipped that while Keynes had the brains, the US had the money.

On the final page of The Economic Consequences of the Peace, Keynes rehearsed the reasons why he wrote the book. It was to set “in motion those forces of instruction and imagination which change opinion. The assertion of truth, the unveiling of illusion, the dissipation of hate, the enlargement and instruction of men’s hearts and minds must be the means.” In the concluding sentence, he wrote that “the true voice of the new generation has not yet spoken, and silent opinion is not yet formed. To the formation of the general opinion of the future I dedicate this book.”

Thanks largely to Keynes, the consequences of the peace that was negotiated at Versailles in 1919 were recalled by those responsible for planning the post-1945 world. •

Got the message? Britain’s prime minister Boris Johnson drives through a symbolic wall at J.C. Bamford Excavators Ltd in Uttoxeter on Tuesday. Stefan Rousseau/PA via AP 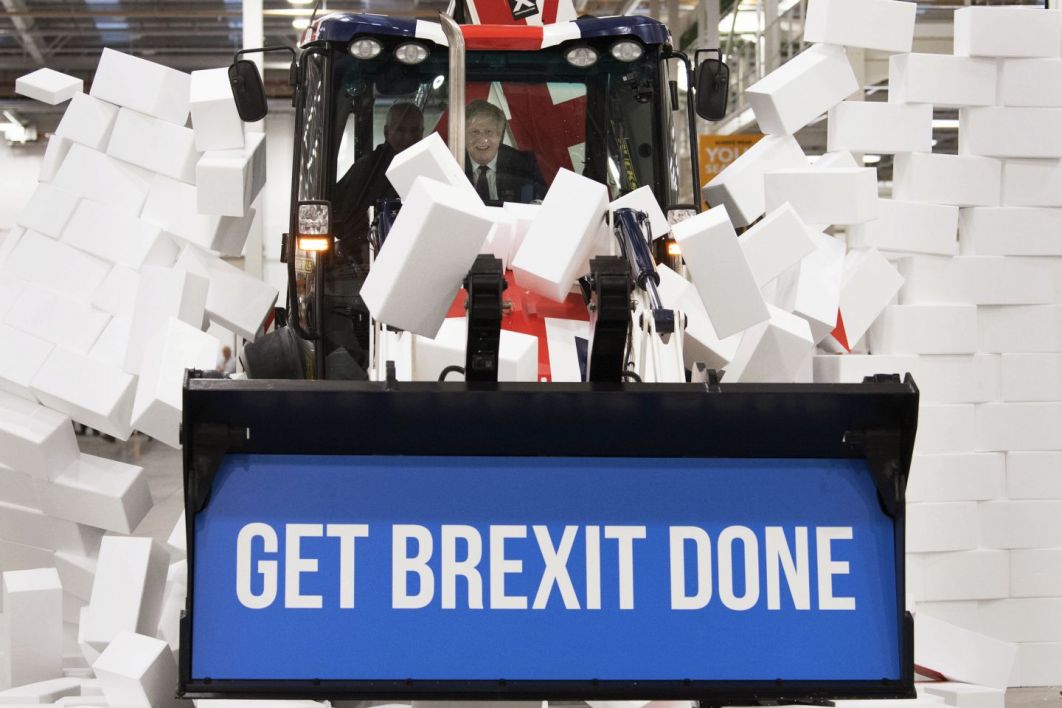 Got the message? Britain’s prime minister Boris Johnson drives through a symbolic wall at J.C. Bamford Excavators Ltd in Uttoxeter on Tuesday. Stefan Rousseau/PA via AP