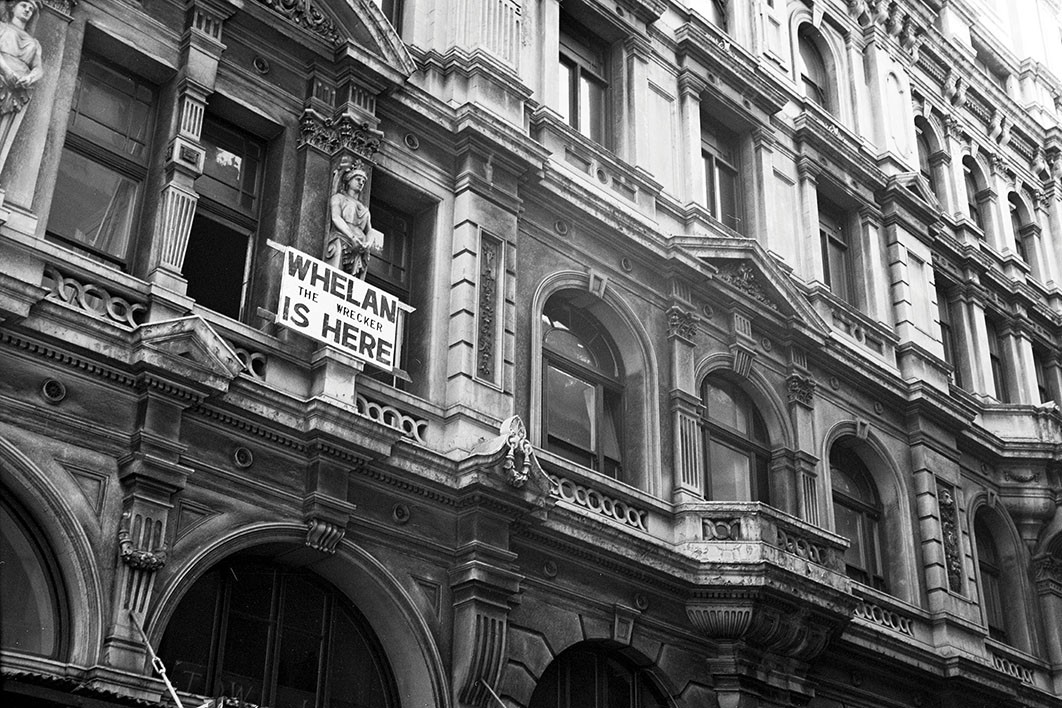 Short work: Whelan rolling up its sleeves on the corner of Swanston Street and Little Collins Street in 1968. K. J. Halla/State Library of Victoria

Gus Berger’s new documentary, The Lost City of Melbourne, shows us the city that Melbourne once was, and the city it has become. Powered by his own enthusiasm and a tiny budget, he has drawn on Australia’s rich stock of archival film to create something both unflashy and splendidly watchable. If the overwhelming impression is one of loss — swathes of “old Melbourne” destroyed with what seems like reckless abandon — there is also a quieter note of near acceptance, a recognition that a city with its identity anchored in modernity must keep changing in order to keep up.

We see how Melbourne was made and remade, from the years leading up to the vibrant, anything-is-possible 1860s through to the long (and not yet complete) postwar enthusiasm for destruction and reconstruction, with buildings, streetscapes, urban centres, gathering places and green spaces disappearing only to reappear in markedly different form. We follow — by means of archival footage, photographs and the part-passionate, part-laconic commentary of a small group of highly engaged experts — how the city got from there to here.

In one sense it is a tragic tale, a story of how nineteenth-century commercial vitality could combine with a commitment to beauty and ornament and aesthetic pleasure, and how that happy combination was abandoned in favour of an equally commercialised faith in the clean and functional yet soulless lines of modernism.

In the later nineteenth century in particular, Melbourne was the most modern of modern cities, but by the early twentieth century the city seemed to be stuck in an earlier version of what it meant to be modern. Extending over many decades, the drive to keep up and go up is now commonly regarded as having got out of hand — a view that will only be reinforced by watching archival clips showing the wrecking ball repeatedly making short work of sandstone and brick and other materials supposedly meant to last.

Towards the end of the film, the tone changes, if not quite to an acceptance of what can’t be undone, then to an acknowledgement that lamentation alone serves no purpose and that we should focus instead on appreciating and celebrating those buildings that have, whether by chance or design, escaped the wrecking ball and now stand isolated or in short, nostalgia-inducing rows.

Buildings that were once imposing are now imposed upon, surrounded by newer and higher structures. From vantage points across the city, we can see architectural history in a single frame, with the metaphor of continuous change and growth made real by the contrast between the squat and solid, satisfyingly proportional yet fancifully decorated buildings of the early days, and the ambitious, straight-up, no-nonsense towers of more recent times.

Not everyone will be convinced by the attempt at balance. The film, with its wealth of archival clips of urban destruction, makes it difficult to understand how wreckers and citizens could have been quite so gleefully enthusiastic about it all. But the urge to knock down and rebuild, which started small, took earnest hold in the immediate interwar years and became rampant from the 1950s through to the 1980s, was not simply the result of philistinism gone mad.

Those statement buildings of earlier times — the insurance offices with their soaring ceilings and abundant curlicues, the lowering hotels with grand public spaces and small, draughty, unplumbed bedrooms, the multi-floor cafes with chandeliers and murals, the picture palaces that later sprung up all around suburban Melbourne — all of them were, in that phrase guaranteed to strike dread into the hearts of architectural conservationists, “no longer fit for purpose.” Replacement seemed the only option.

The fact that Melbourne was always changing, forever being built and rebuilt, meant it was constantly being filmed and photographed. Change attracts the camera, creating a number of distinct golden ages of Australian urban photography, most notably in the 1860s, when the newness of both Melbourne and the photographic medium combined to document the process of urban creation. Mid-century photographers like Wolfgang Sievers and Mark Strizic captured, sometimes in the same image, the excitement of re-creation along with the regret it entailed.

And film of course chronicled these changes in real time: the crowds bustling by Victorian work sites as buildings made their way to unprecedented heights of five or seven or eight floors, right through to Whelan’s ubiquitous wrecking balls making short work of a now-redundant building once expected to last forever — “forever” turning out to be little more than half a century, and frequently a good deal less.

We can’t escape the images’ elegiac tone. And no doubt there were many who at the time regretted the passing of a building they associated with their own youth and optimism, a personal landmark perhaps, one that they were used to making their way by. But regret, by and large, is not what we see on the faces of the witnesses to this assertion of energy and optimism.

The mid-century period of peak demolition was also a time when the most agile and acrobatic of the wrecking crews became urban celebrities, performing breathtaking balancing acts for lunchtime crowds of city workers. Clips from the time capture something of the excitement of looking on as the proudly unknockdownable was swiftly and comprehensively knocked down. Just as people were irresistibly attracted to those makeshift viewing windows that allowed them to peer in at the process of construction taking place, so they could gather to watch the building being demolished, then watch while the whole process started over again.

That was then. Now, the signs everywhere are that, architecturally speaking, we are falling out of love with modernity. Those who long for a return to classical design principles were until recently regarded as hooked on nostalgia, advocates for recreating what could not be recreated except as pastiche. While our fascination with statement buildings and starchitecture continues unchecked in many ways, something has changed.

Organisations and lobby groups that advocate a return to classical design principles (as variously defined) are cropping up all over the place. They appeal, with their accompanying images of medieval hill towns and height-restricted town centres, to what is described as our often unconscious responses to fractals and proportion and ornament. In this traditionalist version of the ideal city, buildings should attract the eye but not stand out — or up — too much. The elements of an urban landscape should go together to form a visually satisfying whole. 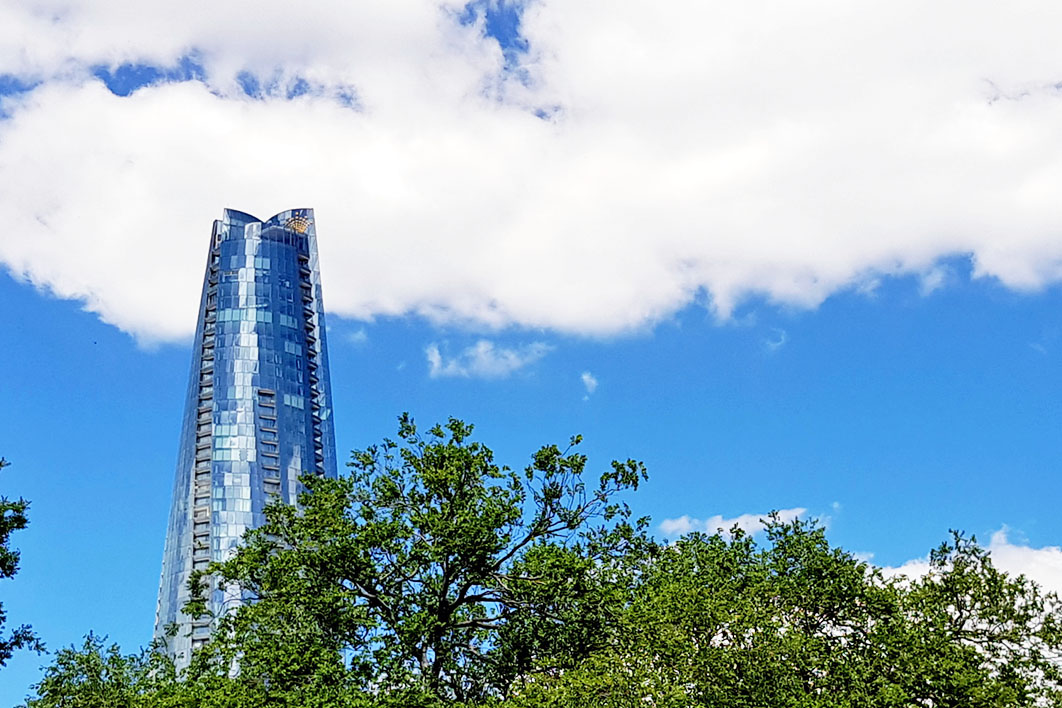 Ultimately, this is about our unresolved attitudes to density and height. How much should we try to fit in the frame before the composition becomes unbalanced, with the new overshadowing rather than complementing the old? A series of articles last month in the Sydney Morning Herald, assessing the relative success or failure of Central Sydney’s ambitious Barangaroo development project, hardly comes close to resolving this question. The commentaries land heavily on one side or the other, as indeed did the many hundreds of readers who felt moved to comment.

The centrepiece of the Barangaroo development, the Crown Tower — visible from points all over the wider urban area — is either a testament to vulgarity of massively inappropriate scale (“Barangaroo stole our skyline,” in the judgement of journalist Margot Saville) or a bold architectural statement of international significance. The Barangaroo development itself is a missed opportunity (a now standard criticism of any architectural or design endeavour, big or small), just one more example of the triumph of profit over public benefit — or the bold transformation of a redundant eyesore into an instantly iconic destination, a major civic asset.

Between these opposing views is one piece of common ground, and that is the ground on which none of Barangaroo’s buildings stand. A renewed enthusiasm for green space — parks, gardens and landscapes returned to their natural or near-natural state — reflects a long-overdue recognition of the intimate connection of First Nations people to the land, the dangers of climate change, and the boost to physical and mental health that comes with access to nature. But green space has the added advantage of being an increasingly rare focus of consensus, free of public debate’s almost automatic polarisation.

The villains remain, of course — the rapacious developers who push back against the greenery in their aim to create more saleable floor space. But even the most cartoonishly profit-seeking developer will generally grasp that a bit of greenery goes a long way towards enhancing perceptions of liveability in the minds of prospective buyers.

One of the common criticisms of skyscrapers, and the race for the next one to be taller and shinier than the last, is that like all bigger and better feats of design and engineering, they are monuments to excess, to the display and performance of wealth and power. In Mariano Cohn and Gastón Duprat’s 2021 film Official Competition, a wealthy and now elderly businessman longs to leave something more behind than his rather prosaic achievements in the world of commerce. “I want to do something that lasts,” he says. “A bridge, for example, designed by a famous architect.”

That he opts instead to finance a film, with a great director, famous actors and the likelihood of critical acclaim, underlines the link between monumentalism and performance. Skyscrapers may be monuments to excess and display, but so were many of the buildings they replaced — the grand merchants’ houses, the imposing and richly decorated insurance buildings, the cafes and hotels with their imported chandeliers, built to last only to give way in their turn to the next performance.

The Lost City of Melbourne asks important questions about the urban landscape, about how we look at it and what we see. What has been lost, and does the knowledge of past loss spoil irredeemably our appreciation of the present? Should we try to replace the past, always assuming that we can? The cycle of demolition and construction has been part of the public identification of Melbourne, and hence of Melburnians, with modernity. It was a particular brand of modernity, one that coexisted with social conservatism, but powerful for all that.

The rush to glass and steel, and the loosening of height restrictions that occurred in the postwar years derived from a fear that Melbourne’s claims to be modern, recently so well founded, were under threat. Perhaps today’s ragged skyline — a jumble of the old and the new — is a new version of modernity we can learn to love. We can see those older survivors as evocative relics in sadly reduced circumstances, just hanging on, or as scrubbing up rather well, all things considered, in the dusk with the height behind them. •