Restoring the independence of the solicitor-general 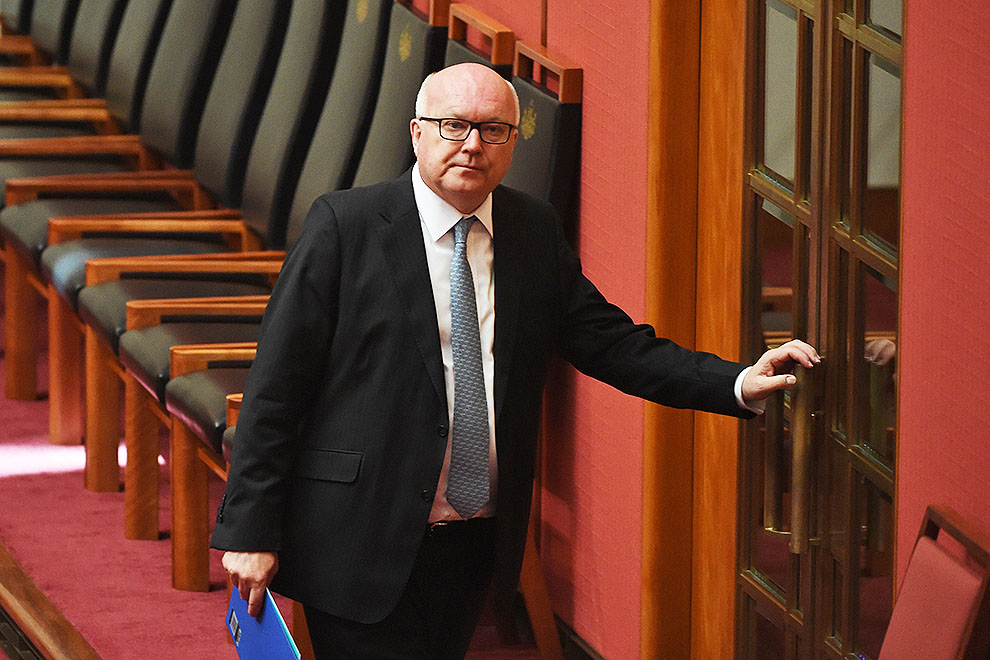 Late last week, six months after George Brandis quietly issued his Legal Services Direction tightening control over the work of the Commonwealth solicitor-general, the attorney-general abandoned the plan. He and the government no doubt hope that this is the end of the controversy, but much more will need to be done to restore confidence in the solicitor-general’s independence and authority.

The attorney-general’s backdown came in the same week as the report of the Senate Legal and Constitutional Affairs Committee on the controversy. The committee recommended that the Senate disallow the Direction and censure the attorney-general for “misleading the parliament and failing to discharge his duties… appropriately.” (Government senators delivered a strongly worded dissenting report, accusing the majority of using the inquiry to pursue “a partisan political agenda.”)

What this long and unedifying saga has revealed is that the solicitor-general’s capacity to act as a trusted, independent and authoritative legal adviser is far from guaranteed. The government must think seriously about reform to the office to reduce the damage caused by recent events, and guard against similar controversies.

To perform his or her role, the solicitor-general needs not only to be trusted by government but also to be willing and able to provide robust and independent advice. This delicate balance rests largely on the professional qualities, ethics and experience of individual solicitors-general. Any future holder of the office must be apolitical and must possess exceptional skill and integrity. To ensure that he or she has the confidence of both sides of politics, and of the public, the appointment process needs to be reformed.

This is a separate issue from the concerns that recent events might deter high-quality candidates from accepting the position. In spite of Gleeson’s treatment during his time in office – on display at its worst during the Senate committee hearing – it’s to be hoped that there are candidates prepared to serve in this important position, particularly at such a pivotal time for the office.

Encouragingly, the government has shown no indication that it intends to rush to appoint a solicitor-general whom it knows and trusts – that is, a candidate who is close to the government – and has instead advertised the role. This is an important (first) step forward: a general call for applications allows candidates not otherwise known to the attorney-general and the government to put their names forward. It widens the pool of potential appointees, and should have a positive effect on the merit – and diversity – of the appointments.

In itself, though, this is no panacea. The government must also consider adopting a more formalised, arm’s-length process of appointment, involving an independent selection panel applying a set of public criteria.

Although there have been few allegations of past appointments being made for purely political motives, the dangers of a closed appointment process are clear. At a time when suspicions of politicisation are at an all-time high, it is particularly important to adopt a more transparent, apolitical and merits-based process. A more open process can also signal to potential candidates that the government intends to act with appropriate respect for the independence and status of the solicitor-general.

Uniquely among Australia’s relevant state and federal legislation, section 12 of the Law Officers Act divides the solicitor-general’s functions in two. According to 12(a), he or she acts as legal counsel to a variety of Commonwealth bodies; according to 12(b), he or she must “furnish his or her opinion to the attorney-general on questions of law referred to him or her by the attorney-general.” By combining these two roles, the Act raises a tricky question: can the solicitor-general provide an opinion on a question of law only under the conditions set out in 12(b)? Or can he or she provide an opinion without the attorney-general’s involvement as part of the broader function of acting as counsel under 12(a)?

Justin Gleeson’s view was that section 12(b) did not limit 12(a), and that 12(b) applies only to “those cases where the attorney-general seeks the opinion of the solicitor-general, which may then stand as the opinion of the attorney-general unless he or she wishes to contradict it.” Sir Anthony Mason, former chief justice of the High Court and also the first solicitor-general appointed under the 1964 Act, is among those who have taken a similar view. Attorney-general Brandis differs: in his submission to the Senate committee, he argued that “the Act explicitly provides only one circumstance in which the solicitor-general may provide an opinion to the government on a question of law.”

In practice, both viewpoints can be accommodated. In the states where the statute gives the attorney-general ultimate control over access to the solicitor-general, for example, protocols and processes have been put in place, with the prior knowledge and consent of the attorney-general, to facilitate confidential requests if they arise in future.

Clarifying how and when the solicitor-general should be briefed

During the Senate committee’s inquiry it became clear that the Commonwealth government has not always sought the solicitor-general’s advice on significant matters, or has sought further opinions if it does not agree with that advice. How can such a practice be prevented in the future?

The first step in preventing the selective use of the solicitor-general’s advice was the withdrawal of the Direction. The fact that it was withdrawn by the government rather than vetoed by the Senate goes a small way to increasing the confidence of future candidates that the government is serious about respecting the office and its role.

Second, there must now be a close review of Guidance Note 11, which governs the processes for briefing the solicitor-general, with three aims: to make clear what types of legal matters must be referred to the solicitor-general for advice; to clarify how the attorney-general is kept informed of those requests, without operating to discourage such requests (as the contentious Direction and Guidance Note may have done); and to clarify that the solicitor-general should be briefed by government either exclusively, or for the purpose of finality. In this final respect, the federal government might look to the guidelines that presently operate in Tasmania.

Clarifying the relationship with the governor-general

During the Senate committee hearing, there was some discussion as to whether the Direction would prevent the solicitor-general from providing legal advice to the governor-general without the attorney-general’s permission. Even before the contentious Direction was issued, this question was unresolved.

There is some disagreement as to the proper legal response to this question. At the federal level, the governor-general is not explicitly mentioned in section 12(a), but may fall within the reference to the “Crown in right of the Commonwealth.” But this takes us back to the question of whether 12(a) allows the solicitor-general to provide advice or simply to act as counsel in contentious matters. The uncertainty highlights the need for statutory reform and clarification.

Leaving the legislation to one side, there is a general trend across Australia to put in place processes and protocols that allow the governor-general (or the governor, in the states) to seek the advice of the solicitor-general. Anne Twomey argues that the current ad hoc practices ought to be further formalised, and that this should occur, most importantly, before any constitutional controversy arises. She argues that it is preferable that the governor-general and governors be given standing permission to access the solicitor-general on a confidential basis.

The current controversy provides the opportunity, at least at the federal level, for the relationship between the solicitor-general and the governor-general to be clarified, with future benefits for the rule of law in times of possible constitutional crisis.

Releasing the solicitor-general’s advice to parliament

If the government is asking parliament to act where there is constitutional uncertainty, it ought to provide parliament with that advice so that MPs can make better-informed decisions. Doing so would also reduce the possibility of the government misrepresenting the solicitor-general’s advice – either intentionally or not – in ways that further its own political agendas. •

Gabrielle Appleby is an Associate Professor at UNSW Law and the Co-Director of the Judicial Project at the Gilbert + Tobin Centre of Public Law. Her book, The Role of the Solicitor-General: Negotiating Law, Politics and the Public Interest was published by Hart in 2016.

A shred of hope for Democrats?

Direct democracy: protesters outside a Wendy's restaurant on West Broadway, Minneapolis, in September calling for a rise in the minimum wage to $15 per hour. Fibonacci Blue/Flickr 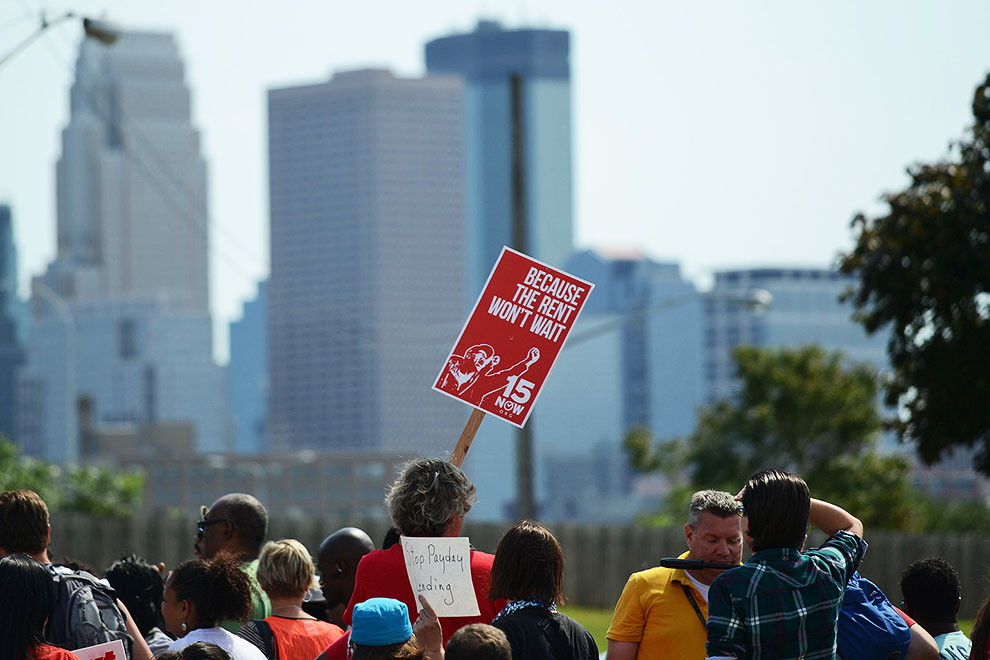 Direct democracy: protesters outside a Wendy's restaurant on West Broadway, Minneapolis, in September calling for a rise in the minimum wage to $15 per hour. Fibonacci Blue/Flickr