Read together, Behrouz Boochani’s No Friend but the Mountains and the Uluru Statement challenge us to look differently at national boundaries 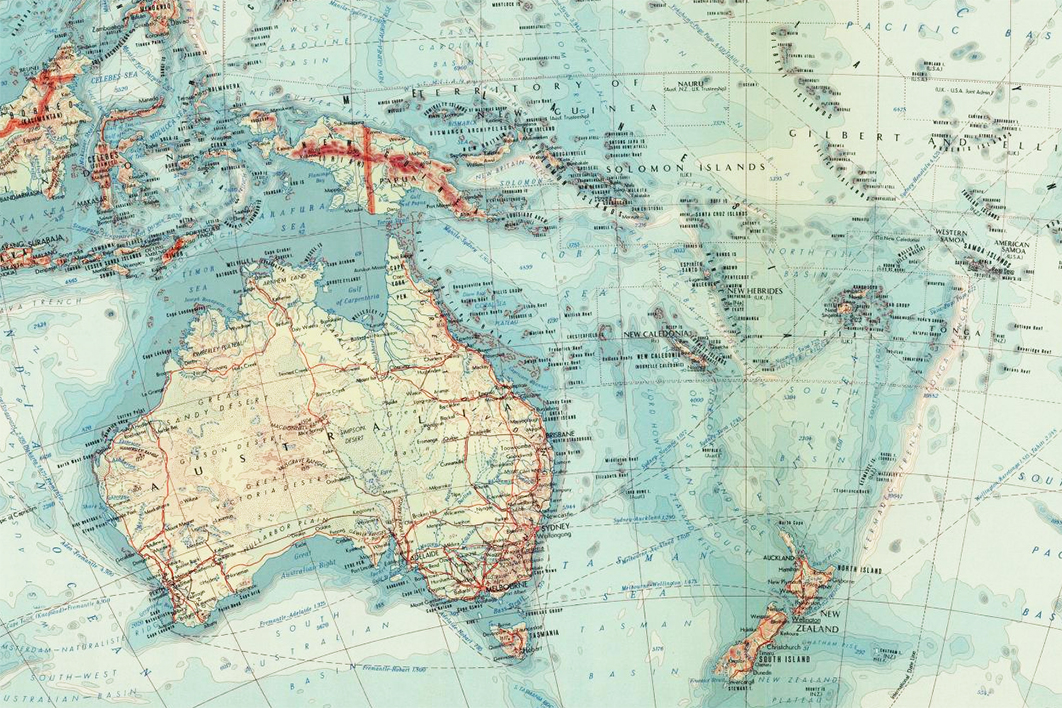 When the Australian Border Force was formed in 2015, its website articulated how it saw Australia’s borders. “We consider the border not to be a purely physical barrier separating nation states,” it said, “but a complex continuum stretching offshore and onshore, including the overseas, maritime, physical border and domestic dimensions of the border.” That “continuum” called for “an integrated, layered approach to provide border management in depth — working ahead of and behind the border, as well as at the border, to manage threats and take advantage of opportunities.” The Border Force would manage Australia’s “global gateway” to maintain strong national security, a strong economy, and a prosperous and cohesive society.

With the further integration of previously separate functions into the new Department of Home Affairs in late 2017, it is not surprising that concern with “national security” has come to dominate how Australians think of their “border.” The way we deal with refugees and asylum seekers is now seen as predominantly an issue of “border protection,” though it is increasingly unclear exactly what threat they pose.

Reading the Kurdish-Iranian journalist Behrouz Boochani’s extraordinary book, No Friend but the Mountains: Writing from Manus Prison, in the context of this expanded border highlights a series of ironies. Boochani’s book, published by Picador in 2018, was written on a succession of mobile phones during his detention, now in its sixth year, on Manus Island. In relation to the Australian border, this author is definitively “offshore.” After trying to access Australian waters by boat from Indonesia, and despite having been granted refugee status, his life has been tightly constrained by Australia’s “border security.” Yet “onshore” — within Australia — his writing and other creative endeavours are having profound repercussions. Among other awards, he has recently won the prestigious Victorian Prize for Literature, and the Prize for Non-Fiction, in the 2019 Victorian Premier’s Literary Awards.

If the border is a “continuum” then new opportunities arise for the excluded to cross it, as well as for the excluders to “manage” it. Boochani has become an impressive — though virtual — presence at literary events, academic seminars and political gatherings around the world. He figures as a creative subject and collaborator in art, theatre and photography. He has made a widely distributed film in collaboration with a Dutch-Iranian director. He also continues to feature — not just as a “source” but also as a journalist in his own right — in accounts of the continuing saga of offshore detention published in Australia.

No Friend but the Mountains is a many-faceted work synthesising a range of genres. A sustained thread of memoir — creatively fictionalised, where appropriate, through archetypes representing fellow detainees — it also incorporates poetry and elements of Kurdish mythology. What has received less consideration than its literary achievements, so far, is the book’s contribution to philosophical reflection about Australia’s policies and practices at and around the border. Some of those issues are explored by Anne McNevin in her Inside Story essay “What We Owe to the Refugees on Manus,” published in November last year. My own reflections on the philosophical aspects of Boochani’s writing have been stimulated by some significant insights in that essay.

The concept of “Manus Prison,” as developed by Boochani, extends beyond a place of incarceration outside the physical border. It points to a network of practices of oppression and containment — and a supporting framework of ideas — whose effects can be located both offshore and onshore. Thinking through that analysis yields a disturbing challenge to how Australians have come to collectively imagine recent mass movements of people. McNevin’s essay sketched a reversal of perspective — from treating refugees as objects of our condescending pity to recognising ourselves as diminished by our own policies. That reversal was foreshadowed in an imaginative fable by Boochani’s translator, Omid Tofighian, narrated in a supplementary — but integral — set of reflections incorporated in No Friend but the Mountains. In this story about “two islands,” familiar “offshore” and “onshore” perspectives change places:

The first island is the settler-colonial state called Australia, and the prisoners are the settlers.

The second island contains Manus Prison, and knowledge resides there with the incarcerated refugees.

The impact of Boochani’s book goes beyond a shocked recognition of the manifest cruelty of Australia’s refugee and asylum seeker policies. As well as being a masterly and harrowing piece of “prison literature,” this is also an exposure of how Australia’s “offshore” cruelty reflects a debilitating curtailing of imagination and empathy — a maiming of collective consciousness — “onshore.” The message to be learned is this: “Manus Prison” is us.

We certainly need to recognise the mystification that has facilitated refugee policies while being itself intensified by them. But the concept of “Manus Prison” demands that we also recognise other disturbing transitions. Should we have expected the cruelty in the treatment of refugees offshore to remain comfortably beyond the old physical borders?

Thinking of “border security” as a continuum has facilitated an acceptance of new policies that impose hardship — to the point of destitution — on the strangely labelled “legacy caseload” of asylum seekers living within Australia. These are the people who arrived by boat prior to the reopening of detention centres on Manus and Nauru. “Strong borders” rhetoric and practices have accentuated a division between them and those refugees who managed to arrive through formal channels. Many refugee families are divided along the lines of that division, though their differential treatment has no justification in international law.

The emphasis on “border security” is now entrenched in Australian politics and policy, and in the popular imagination. “Strong borders” seem to have merged with the “war on terror.” The creation of a group of people — “those who would do us harm” — no longer points beyond the border; it also operates here, among us, behind the border. Having spread to the treatment of refugees onshore, the “othering” rhetoric is now playing out in the stripping of citizenship from Australians, many of whom have spent their entire lives here, and in unexplained delays in processing the citizenship applications of others.

The rhetoric of “strong borders” and “border protection” is not confined to Australia, of course, although our current policies have played their part in a global shift in attitudes to movements of people. Yet there are some peculiarly Australian features of the fears that sustain — and are in turn sustained by — the rhetoric. Tolstoy’s dictum that every unhappy family is unhappy in its own way has application also to troubled polities: to each, its own amorphous unease about borders.

In Australia, mantras of deterrence and border security have become so familiar that the harsh realities of indefinite offshore incarceration are relegated to the margins. We should be shocked by those realities. Instead, at best, they are seen as a regrettable but necessary evil — justified as means to an elusive national good. (Was the border ever really under threat from those who came without prior authorisation to seek protection?) At worst, they are subsumed into strange parodies of justice or even compassion. We are encouraged to think that it is for their own good, as well as our own, that those who seek to arrive “unauthorised” must be kept at bay. (To save others from drowning at sea, did we really have to mistreat those who survived the perilous journeys?)

When we get to hear them, the voices of refugees themselves can cut through the static, challenging us to think again. Boochani’s voice has also challenged us to think about other policies that reflect a similar pattern of thought. His philosophical reflections around the theme of “Manus Prison” include some trenchant comments on the continuities between Australia’s refugee policies and its treatment of its own Indigenous peoples. He argues that the conditions that gave rise to offshore detention should be understood, and more deeply studied, in relation to the history of post-settlement Australia. In further exploring that idea, McNevin’s essay highlights the tendency to circumscribe the dispossession and oppression of Australia’s Indigenous people as a “closed chapter” rather than to acknowledge how it reaches into the present. The horrors of dispossession are seen as aberrations in an ongoing positive narrative of progress.

In that context, there are significant parallels between the impact of No Friend but the Mountains and that of the beautifully crafted “Uluru Statement from the Heart,” in which representatives of Australia’s Indigenous peoples responded to a request to consider how the Australian Constitution might be amended to allow more meaningful “recognition” and “inclusion.” In repudiating what seemed inadequate tinkering with the wording of the Constitution, the framers of the Uluru statement offered an alternative approach that had emerged from extensive consultation with Indigenous groups across the nation. Rather than seeking greater inclusion within a Constitution shaped by the dominant majority, the historically dispossessed Indigenous minority made an alternative offer to the national imagination: to include non-Indigenous Australians in a narrative of continuous human presence on the Australian continent.

The offer came with a proviso: non-Indigenous Australia must first acknowledge the truth of past oppressive exclusions, and the ongoing effects of those exclusions. If there is to be non-tokenistic recognition, there must first be an exhaustive process of truth-telling and acknowledgement. It was a proposal of extraordinary generosity and powerful political potential; had it not been thoughtlessly dismissed by members of the government, it might have brought the nation together in meaningful reconciliation, grounded in genuine recognition. It might yet do so.

There was a powerful rhetoric at play in the reversal of perspective — of “us” and “them” — at the core of the Uluru statement. Its potential to resonate in the collective Australian consciousness can be compared with the impact of the reversal of border-thinking articulated in No Friend but the Mountains. But perhaps there is a deeper connection here than parallel rhetorical strategies. What if the ongoing tragedies of Australia’s treatment of refugees and of its Indigenous peoples are seen as, conceptually, two sides of the one coin — facets of a flawed imagining of national identity, both grounded in a failure to engage in truth-telling?

While attitudes towards refugees in Australia were hardening, historians were increasingly revealing the previously denied realities of the resistance to dispossession offered by Indigenous peoples — and of the accompanying massacres perpetrated by settlers. At the same time, evidence of the deep time of Indigenous presence on the continent — and the cultural depth of that presence — has become undeniable. What European settlement tried to displace was not an uncivilised form of humanity, doomed to extinction and incapable either of managing the land or of resisting its occupation. It was a highly developed system of knowledge and practices that had responded to environmental change over a period of 60,000 or more years. This is a great deal for the consciousness of non-Indigenous Australia to absorb.

Perhaps it is time for Australians to reflect on the relationship between those two sets of issues. On the one hand is a “whispering in the hearts” of non-Indigenous Australians, unsettled by a deep past into which Europeans claimed “uninvited” entry. On the other hand is the increasingly troubled sense of something deeply amiss in the treatment of the more recently “uninvited,” whose arrival has been so readily construed as threatening “our” borders. Exploring the interconnections of those two sources of collective unease may be a long and contentious process. That No Friend but the Mountains has offered a way into beginning that process is something that should be welcomed — as Anne McNevin expressed it so well — as “something akin to a civic gift.” •

Genevieve Lloyd is an Emeritus Professor of Philosophy at the University of NSW.