Does Britain’s youngest prime minister for more than 200 years have what it takes to end the country’s crisis of leadership? 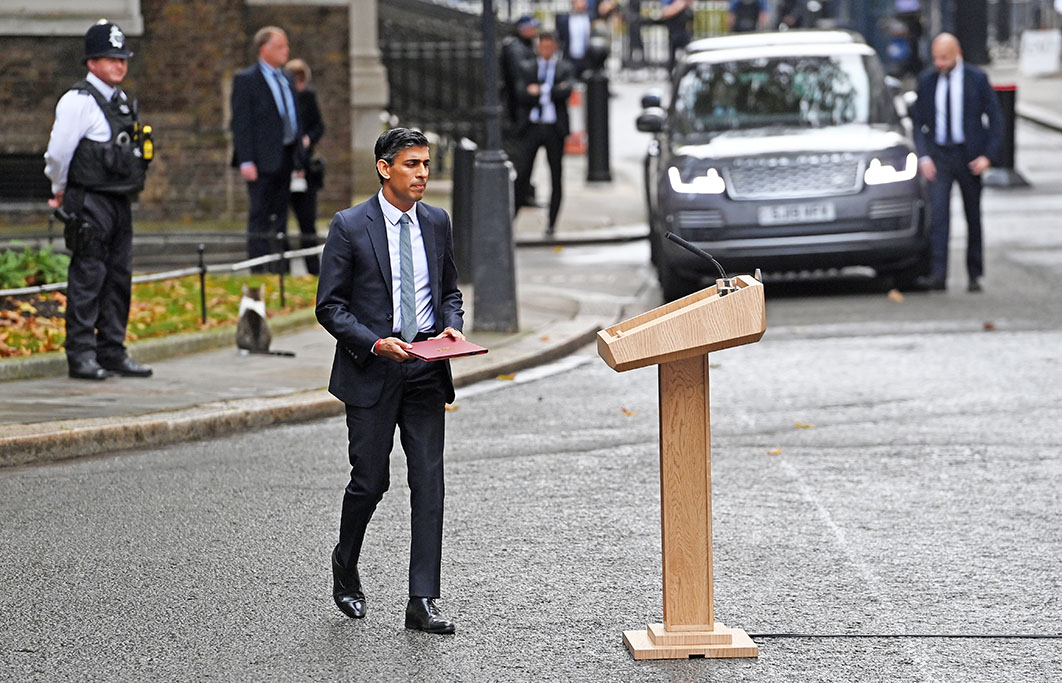 The sequel: Rishi Sunak arrives in Downing Street yesterday after being sworn in as prime minister by King Charles. Andy Rain/EPA

Had the last three years of British politics been pitched to Netflix as the plot for a follow-up drama series to The Crown, it would surely have been rejected as too implausible.

The country’s second female prime minister, elected to take Britain out of the European Union, is deposed by her own MPs after torturous negotiations fail to secure a parliamentary majority. She is replaced by a chaotic, philandering buffoon who suspends parliament illegally and expels pro-Europeans from the Conservative Party — but then wins a general election promising to “get Brexit done.” He does so by agreeing to a deal he’d attacked when the previous prime minister proposed it, putting peace in Northern Ireland in jeopardy.

The world is struck by a deadly pandemic; the buffoon very nearly dies. Mishandling its response to the virus, the government presides over 180,000 deaths, among the highest per capita in the developed world. It’s revealed that while the PM was passing laws prohibiting people from socialising, he and his staff were holding regular parties at 10 Downing Street, about which he lied to parliament.

Fined by the police, the PM is then discovered to have had clandestine relationships with a former Russian spy and current party donors. After he tries to bend anti-corruption rules to save a colleague, his second in command resigns. He rapidly loses the support of his cabinet and is ousted. In the subsequent election for party leader his number two, the favourite to succeed him, is beaten by a slightly unhinged free marketeer prone to mimicking Margaret Thatcher, who becomes the country’s third female prime minister. Two days after she takes office the Queen dies after seventy years on the throne. Two weeks later the new PM’s chancellor of the exchequer announces a “mini-budget” comprising huge tax cuts, targeted at the rich, paid for by massively increased borrowing.

The pound falls to its lowest-ever level against the US dollar. The financial markets go into meltdown and the Bank of England is forced to step in to prevent pension funds going bust. Conservative MPs say they will not pass the measures. The PM sacks her chancellor. His replacement reverses almost the entire mini-budget while the PM looks on stony-faced and humiliated. She then faces chaotic scenes in parliament as she tries to force her MPs to vote in favour of fracking, which many oppose.

The next day the PM announces her resignation, making her at fifty days the shortest-lived occupant of 10 Downing Street in British history. For a brief moment it looks like the buffoon will return as the new party leader. But eventually the crown passes to his former number two, the loser of the previous race. Britain’s first-ever non-white prime minister stands in front of the famous black door of 10 Downing Street, pauses, and walks in. The credits roll.

That new prime minister, Rishi Sunak, is not just the first from Britain’s Asian community — his parents came to England from East Africa in the 1960s — but at forty-two is the youngest prime minister for more than 200 years. Even more remarkably, he is the first-ever prime minister richer than the reigning monarch. This is thanks to the £730 million fortune he shares with his wife Akshata Murthy, daughter of the Indian billionaire and founder of Infosys, N.R. Narayana Murthy. (King Charles’s personal wealth is estimated to be a mere £370 million.)

Sunak’s rise to the top has been swift. A former hedge fund manager educated at one of Britain’s poshest public schools, he has only been an MP since 2015. But when Boris Johnson needed a new chancellor in February 2020, the field of economically literate Tories who had voted for Brexit was not a large one. Sunak took up the position just as Covid-19 struck.

The crisis made him unexpectedly popular. A generous furlough scheme, which at its height was paying the wages of around nine million employees, kept the British economy alive as society locked down. Later, to revive the hospitality sector, Sunak introduced an “Eat Out to Help Out” scheme giving the public £10 off restaurant meals. It seemed that Sunak could do no wrong. As it happened, the scheme was later found to have contributed to a spike in Covid cases. By this time, though, Sunak was embarked on a new project, that of restraining Boris Johnson’s spending plans.

Little was known about Sunak’s economic views before he became chancellor. But once the Covid crisis was largely out of the way, it emerged that he was a “sound money” fiscal conservative who believed in balanced budgets. After his own Covid spending and borrowing spree, that meant public spending had to be kept firmly under control.

The result was an increasingly abrasive relationship with Johnson, who wanted to spend money. Almost every one of Johnson’s political goals — reducing regional inequalities, reforming social care, moving towards net zero — required higher spending. But Sunak not only refused to provide the money Johnson demanded, he also introduced the largest series of tax rises in a generation to try to bring down debt, now approaching 100 per cent of GDP. It almost seemed as if he was trying to sabotage Johnson’s premiership.

And then — just a year ago — a strange thing happened. A leak to the press revealed that Sunak’s wife was avoiding millions of pounds in tax by claiming that she was not resident in Britain. Such information is known to very few people, so it was widely assumed the leak had come from Boris Johnson’s team. Sunak said his wife’s tax arrangements were a matter for her. But given he was chancellor, and therefore responsible for the tax rules, his response didn’t suggest the most astute political judgement.

When it then emerged that Sunak himself still held a US green card, an American work permit that has to be applied for annually, the reaction — much of it from his own colleagues — was explosive. Did this former Silicon Valley executive believe his involvement in British politics was just a temporary thing, and if he got bored with it he could always return to America to make some more money?

As pictures of Sunak’s four multimillion-pound homes (three in Britain and one in California) were paraded in the media — in one property he was installing a £400,000 swimming pool whose heating bill would exceed that of most entire households — it seemed that his ambition to be the next leader of the Conservative Party was over.

But Sunak didn’t quit and return to America. He remained chancellor, received a fine for attending one of the infamous Downing Street parties during Covid, and awaited his moment. It came in July when Johnson finally made one corrupt error too many. Sunak resigned as chancellor and called on Johnson to stand down. His departure triggered a wave of other ministerial resignations. Johnson was left unable to form a government. He resigned two days later.

Sunak started out as favourite in the Tory leadership race that followed, his former transgressions apparently forgiven, at least by his fellow Conservative MPs, who gave more of their votes to him than to any other candidate. But he had not reckoned with the party membership. Many Tory members were furious with him, both for his role in Johnson’s defenestration and for his tax rises. (While some, it was whispered, noted that he was not white.)

He warned that Liz Truss’s radical tax-cutting plans were “fantasy economics” that would not stand contact with the reality of the financial markets. He too was a Thatcherite, he declared, but one who believed (as Thatcher did) in fiscal responsibility: bringing borrowing and inflation under control first, and then cutting taxes when the economy was strong enough to do so.

His warnings went unheeded. Truss beat him comfortably to claim the party leadership and become prime minister. The rest, as they say, is history.

And so, now, is Liz Truss. In the truncated process that a traumatised party chose to elect its leader last weekend, Sunak promised to bring unity, with a cabinet appointed from across all the party’s warring factions. He duly won the support of more than half its MPs. Boris Johnson returned from a holiday in the Caribbean to try to regain the crown. But this time even the Tory Party preferred bread to circuses, and he was forced to withdraw.

Sunak was elected unopposed. The next day he was asked by King Charles to form a government. Constitutional order was restored. Who knows, the two men may even have discussed wealth management strategies. •

Michael Jacobs, Inside Story’s global climate correspondent, is Professor of Political Economy at the University of Sheffield.