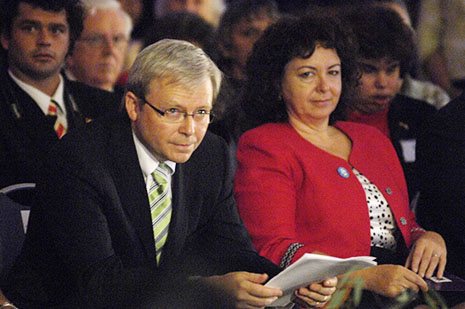 KITES ARE not uncommon objects in the political sky in an election year, but already we are seeing a less common variety being put to the winds – referendums. Both prime minister Kevin Rudd and opposition leader Tony Abbott have flagged proposals for constitutional change, the former on his proposed health takeover if the states do not agree, and the latter in relation to water resources.

While these plans might suggest a degree of high seriousness about initiating change, they can’t be undertaken with any real confidence of success. To achieve a precarious balance between the pre-federation colonies’ interests, and thus to bring about federation, the authors of the Australian constitution produced a document – essentially a series of compromises – that is very difficult to change. It’s not so much that it is rigid, but rather that it is exceedingly democratic: under Section 128 not only a majority of voters but also a majority of voters in each of a majority of states must vote for a proposed amendment to succeed. This was designed to protect the smaller states from domination by New South Wales and Victoria, but also protects these two from concerted action by the others. Hence, gridlock.

The mere statistics – eight successful referendums out of forty-four proposals – convey the difficulty of seeking constitutional change, and both leaders are keenly aware of this reality. But the current proposals are all about politics, and it is the politics that will determine the outcomes, not the merits of the proposed amendments. Australian political history is littered with governments that promised to hold referendums on a variety of issues, yet it is also marked by the curious reluctance of the same parties to support similar proposals in opposition. Of course, the paradox is that while voters have generally been reluctant to cede additional powers to the Commonwealth, the practical workings of the federation, ably assisted by judicial interpretation, have ensured a centripetal trajectory for more than a century.

So, why do a few proposals succeed and many others fail? The answer is buried deep within the Australian psyche and its complex and contradictory attitudes towards authority. The rule of thumb, generally, is that a proposal is likely to succeed if the major political parties take the highly unusual step of adopting a bipartisan approach, most notably in the 1967 referendum that formally enabled the Commonwealth to enact laws for Indigenous Australians and abolish the prohibition against including them in population counts. With opposition confined to isolated pockets of the outback, the proposal was carried by a record vote of almost 91 per cent in favour, and a clear majority in all states.

For the record, the other seven successful referendums involved the proposal to hold concurrent elections for both houses of parliament (1906), giving the Commonwealth unrestricted power to take over state debts (1910), ending the system of per capita payments to the states (1928), giving the Commonwealth power to legislate on a wide range of social services (1946), ensuring that casual Senate vacancies are filled by a person from the same party (1977), allowing electors in the territories to vote in referendums (1977) and providing for a mandatory retirement age for federal judges (1977).

But the closer one looks at the picture, the more complex it becomes. Seven of the eight successful referendum proposals have been carried in all states, and on nine occasions there have been no majorities in any state. But if, for example, there had been no provision in Section 128 for a double majority, the outcomes would have been very different. In fact, many of the results were close-run things, and on five occasions a majority of voters favoured the proposals but not a majority of states. In 1977, the Fraser government proposed entrenching the holding of House of Representatives and Senate elections at the same time (as mostly happens, anyway). With broad bipartisan support, the proposal received a healthy majority of more than 62 per cent of the voters, but it failed to carry in three states – Queensland, Western Australia and Tasmania. In 1984, the Hawke government proposed removing the fixed-term provisions for senators and, while almost 51 per cent of voters approved, the proposal won majorities only in New South Wales and Victoria. Voter majorities also prevailed in votes on aviation (1937), the marketing of primary products (1946) and industrial employment (1946).

Another factor – and one that should concern Mr Rudd if he desires to seek his health takeover via a referendum – is that even broad bipartisan support is not enough to carry the day if significant opposition is forthcoming within one or more states, and especially from hostile premiers.

Apart from the five voter-majority proposals that failed to carry a majority of states, twelve other proposals have been favoured by more than 48 per cent of voters where only a handful of votes in a single state might have been sufficient to shift the outcome, and on eight other occasions the “yes” vote was between 45 and 48 per cent. The multitude of factors that influence regional variation make it exceedingly difficult to conduct a campaign to secure a “yes” vote. On a state-by-state basis, it is Tasmania that has returned the largest number of “no” votes – thirty-four out of forty-four – while Western Australia tops the “yes” list with twenty-five.

Against this dismal background, it is an ambitious (or perhaps wily) prime minister who puts his faith in change via referendum. But in this message-driven age of politics there will be plenty of advice against holding a referendum in conjunction with an election (which, of course, it doesn’t have to be). The risk of political fallout from a defeated referendum question is very real, and a politician as cautious as Kevin Rudd will know this.

If passions are aroused – and a negative “no” campaign can do just that – is there perhaps a risk that “no” voters will reject the proponent of the question as well as the question itself? In a strategic marginal seat, such a possibility might well be crucial. Would not a clever opposition mount a strategically targeted “no” campaign and hope for the flow-on?

Both the issues flagged by Rudd and Abbott – health and water resources – are fraught with political risk if taken to referendum, not just because of partisan opposition but also because of potential hostility from the states. The waters, indeed, would be muddy. •

Regardless of claims by polluters and sceptics, the IPCC’s science is overwhelmingly sound, writes Melanie Fitzpatrick from the Union of Concerned Scientists in Washington

John Kerry, one of the authors of a climate change bill to be presented to the US Senate shortly. Center for American Progress 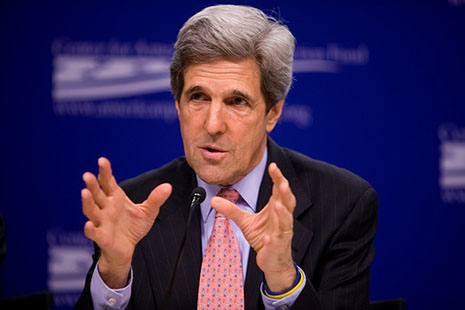 John Kerry, one of the authors of a climate change bill to be presented to the US Senate shortly. Center for American Progress