Private hospitals are safer than public hospitals for mothers and newborn babies, according to a study that made headlines last month. But there was less coverage when clinicians and other researchers began to express concerns about the research methodology, write Hannah Dahlen and Sally Tracy 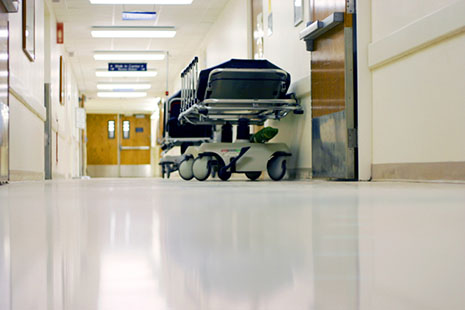 THE HEADLINES told a dramatic story. “Public hospital births double risk for mother and baby, says report,” said the Age. “Babies die less often in private hospitals,” said the Australian. “Private hospital births safer than public: study,” reported ABC News Online. The study they were referring to, carried out by Associate Professor Stephen Robson and his colleagues, was published in the Medical Journal of Australia in mid February.

Using Australian national data for 789,240 full-term births from 2001 to 2004, the study found that women giving birth in public hospitals had more than twice the rate of severe perineal tearing, and that their babies were more than twice as likely to require high-level resuscitation at birth and more likely to have low Apgar scores (a measure of a baby’s condition at birth). Intensive care admissions were also found to be more common in babies born in public hospitals. Most dramatically of all, neonatal death rates were one in 1000 in private hospitals and three in 1000 in public hospitals.

Although the study provided some new information on birthing in Australia, a closer examination of its methodology reveals worrying flaws. The most important of these concerns the overall design of the research project. Any study of this kind faces the reality that the two populations being compared – in this case, women giving birth in private and public hospitals – will differ in important ways. Every effort must be made to adjust the samples to make them as alike as possible. In this case, the authors attempted to do this some ways, but not others. They excluded women with multiple pregnancies (twins, triplets etc) and pre-term births (earlier than thirty-seven weeks). They only included women who were between thirty-seven and forty-one weeks of pregnancy. And they excluded women who were reported as private but gave birth in public hospitals, uninsured women who gave birth in private hospitals, and births for which the hospital sector was not identified. (As a result 14.3 per cent of women, mostly from the private sector, were excluded from the study.) The authors also adjusted for a number of maternal demographic characteristics of women in public and private hospitals (age, Indigenous status, smoking during pregnancy, diabetes or hypertension, remoteness of usual residence and method of birth).

So why has the study created such an outcry among clinicians and researchers? To try to explain the problem, one of us told a journalist last month that “it’s like taking a bunch of Olympic athletes and looking at their outcomes under a private obstetrician, and then looking at a group of everyday citizens [in public care] and saying, ‘well, that’s due to the fact that they’re in the public system.’” Women who are privately insured and likely to give birth in private hospitals are generally advantaged in many ways compared to the rest of the population. On average, they have better access to housing, transport and social support and are more likely to eat healthy food and to exercise. These social determinants of health lead to better outcomes for women and babies, but they were not factored into this study. While smoking was controlled for, it is often underreported by women – and lower income women, who are more likely to be in the public system, are the group most likely to smoke during pregnancy. Obesity is another health issue associated with adverse outcomes for women and their babies; it too was not controlled for in this study, and it too is more prevalent where there is social disadvantage.

Anticipating that the study would be criticised on these grounds, the authors say that “the major adverse outcome associated with social disadvantage is low birthweight” but that this form of disadvantage “was beyond the scope of this study.” Yet low birth weight is a major predictor of adverse perinatal outcome. The National Perinatal Data Collection does record birth weight accurately and could easily be used to remove this bias. The failure to do so is one of the main reasons why this study yielded different results form other Australian studies.

For the Australian Medical Association, publisher of the Medical Journal of Australia, the study’s findings fit into a longer term argument about the need to protect obstetric care from proponents of the role of midwives. “It is a long-held orthodoxy that increased rates of obstetric intervention are ‘bad’ for women and their babies,” said the journal’s media release. “Our results show that although the model of obstetrician-led care [in private hospitals] is characterised by increased rates of intervention, outcomes for women with a single baby delivered at term are no worse, and further studies may determine there are benefits for women and their babies.” This is misleading. The study identified significantly higher rates of caesarean section in private hospitals (35.6 per cent versus 21.9 per cent) yet the authors made no attempt to address the known maternal or neonatal morbidity associated with these births. In the event of a repeat caesarean section, for example, one study reported that the mother’s risk of serious morbidity can increase tenfold for severe, even life threatening post partum hemorrhage where placenta accreta or placenta praevia are involved.

The only outcome for women (rather than for babies) measured in the study was severe perineal trauma, even though – contrary to the authors’ claim – it is not the only outcome for which data is available. It is curious that episiotomy was not reported, as we know this occurs at around twice the rate among women having babies in private hospitals. It is also curious that intact perineum (no tears) was not reported when private hospitals do less well on this international indicator of optimal care.

Nor were the study samples adjusted for ethnicity in this study, despite the fact that it is well documented that Asian women have double the severe perineal trauma rates, and the statistics show that they are less likely to hold private health insurance. Likewise no adjustment was made for birth weight, another identified risk factor for severe perineal trauma. Evidence also suggests that severe perineal trauma is underreported in private hospitals and what is classified as severe perineal trauma can vary. And it stands to reason that when over one third of babies are delivered by caesarian section there will be less perineal trauma for the mother but not necessarily less trauma in other respects.

Australian research using the National Perinatal Data Collection found highly significantly raised rates of admission to neonatal and special care nurseries following caesarean section for low risk women. In addition, a recent study undertaken by Henderson Smart and colleagues used the more detailed Australian and New Zealand Neonatal Network data and reported figures for admission rates to both NICU and SCBU of babies of ‘‘low risk’’ women. They found not only higher rates of admission across each gestational age group, but also reported the death of two infants after elective caesarean section. These morbidities and mortalities are arguably the most important differentials of care experienced by women who give birth in private or public hospitals.

When looking at perinatal outcomes the study was limited by the data source, and so it could not assess the impact of fetal pathology or conditions requiring tertiary maternal or neonatal care. This highest level of care is only available in public hospitals – usually those hospitals with dedicated sub-specialist services in maternal-fetal medicine, neonatology or neonatal surgery. The researchers did not exclude deaths due to congenital anomalies, which would have ensured that deaths unrelated to obstetric management were not part of the outcome. Congenital anomaly can readily be detected by antenatal ultrasound screening in the practices of private obstetricians and these pregnancies are usually transferred and managed under public high-risk teams. Women anticipating long periods of care in the public system or indeed for their baby in the neonatal intensive care unit often change their status from private to public, and would therefore be in the public hospital group in this study. If the women with the same potential for high-risk perinatal events had been excluded from the public hospital data set as they were from the private data set we may have seen an entirely different outcome.

Prematurity is also a common reason for transferring women from the private to the public sector, but many women with threatened preterm labour go on to deliver at full term, thus remaining within the public system statistics with higher risk pregnancies. Finally, it’s unclear whether the study’s authors were able to track those babies transferred from private hospitals to the public neonatal intensive care system who died within twenty-eight days following birth.

All these factors undermine that the study authors’ conclusion that, “for women delivering a single baby at term in Australia, the prevalence of adverse perinatal outcomes is higher in public hospitals than in private hospitals.” Further, better research is needed into adverse outcomes of labour in public and private hospitals in Australia. It’s to be hoped that the shortcomings of this study will spur us on to conduct rigorous and relevant studies in the future.

As health care providers, researchers and consumers we must not forget to look at research – and at media coverage of research – with a critical eye. Only then will we be able to improve outcomes for mothers and babies. The release of Improving Maternity Services in Australia, the report of the National Maternity Review, on 21 February gives us the best opportunity yet to combine the best scientific evidence and consumer choice together in order to improve the quality of care. • 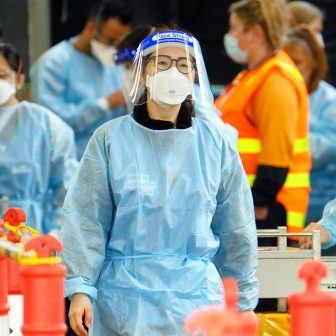 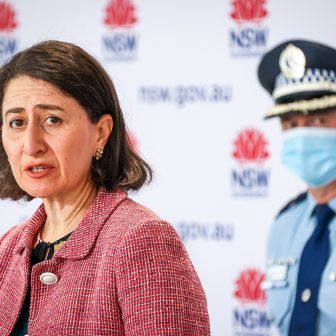 National Affairs Lock down smarter, not harder Daniel Reeders 24 August 2021 Deepening lockdowns don’t reflect what we know about how the virus spreads
Close