History, to paraphrase some German philosopher or other, tends to repeat itself. The first time as tragedy, the second as farce.

And the third time as vaudeville? Adam McKay’s cinema account of the rise and rise of Dick Cheney, White House staffer to Richard Nixon, defence secretary to George H.W. Bush and vice-president to George W. Bush, gives us history as a series of chilling acts, tricked up with directorial gimmicks. This is Vice, and it is being heavily promoted in the Oscar race.

Vice is the story of a man who never got to be president but built his own empire in the White House. It was Cheney who oversaw Operation Desert Storm for Bush Snr, became president and CEO of Halliburton, a company that profited immensely from America’s wars, and then, as vice-president to Bush Jnr, used dodgy intelligence to claim Iraq possessed weapons of mass destruction and went on to oversee the invasion of Iraq, the setting up of Guantanamo Bay, the legal opinions authorising torture, and Abu Ghraib. Advised by a lawyer named David Addington, Cheney vastly expanded presidential control of the executive — the departments of state, defence, and so on — under the doctrine of “unitary executive power.” McKay’s exploration of this thesis, which essentially rejects most efforts of Congress to rein in presidential adventures, is one of the most illuminating parts of this film.

McKay ran the writers’ room for Saturday Night Live before moving to film with such comedy hits as Anchorman: The Legend of Ron Burgundy and Talladega Nights: The Ballad of Ricky Bobby. Those were fun. Then he turned to serious stuff, and made The Big Short (2015), which used Jennifer Lopez, and Margot Robbie in a bubble bath, to explain the intricacies of subprime mortgages. Never let your audience become bored, right? They have short attention spans. Let’s not get too, uh — heavy.

McKay’s devices make Vice fly along, skittering from one piece of political bastardry to the next, and give little time for contemplation. Yet these attention-grabbing techniques make for an oddly unbalanced film because, at the centre, is a strong performance from Christian Bale, overweight and lumbering, playing Cheney with terse gravitas. Bale gives Cheney such a slow reaction time when confronted with crisis it’s a wonder the man ever passed a driving test. Maybe he didn’t. He was twice charged with driving under the influence at twenty-one. Then he married Lynne (Amy Adams), who is credited with straightening him up.

Under her bright, preppy exterior she’s a Republican warrior as ambitious as her spouse. One of the film’s most diverting sequences has her conferring with him in the marital bed, slipping into Shakespearean dialogue as they plot. Sam Rockwell, always convincing, plays a butterfly-brained George W. Bush, Cheney’s patsy. Steve Carrell, less convincing, plays Donald Rumsfeld.

Cheney’s career is huge, so this film has a lot of exposition to manage. The first part is heavy with voice-over, and McKay invents an army veteran called Kurt (Jesse Piemons) to do much of it. As in The Big Short, the film breaks the fourth wall at times to have characters talk direct to camera. I found the barrage of directorial gimmickry irritating rather in the way the ABC television series The Checkout became irritating as it dolled up excellent research with sketch comedy. But there were also times, as the film described how Cheney traduced presidential power and built his secretive empire, when I was riveted. How did he get away with this?

Cheney’s younger daughter, Mary, came out as gay at college. McKay is at pains to give Cheney credit for holding back conservative campaigns against same-sex marriage in Bush’s time, though when their elder daughter Liz runs for Congress, he breaks this promise at Lynne’s urging.

How accurate is this depiction of Cheney? His final, unrepentant soliloquy to camera is apparently built verbatim from Cheney’s public utterances. But perhaps we’ll never know the full story, because during Cheney’s years Bush’s White House “lost” twenty-two million emails from a server owned by the Republican Party.

If you’re interested in American politics, Vice is undoubtedly a film to see, if not necessarily to admire. Sit through the final credits and you will see a misjudged directorial sequence attempting to frame audience reactions in a way that underlines McKay’s shortcomings. You can take the writer out of Saturday Night Live but you can’t necessarily take Saturday Night Live out of the writer.

Pawel Pawlikowski’s Cold War is as thrilling as it is beautiful. The music makes it so. Because the film matches sadness and exultation so exquisitely, it led me to ponder the relationship between melancholy and melodrama.

This is the story of a love affair begun in Poland during the 1950s, and of lovers constantly parting and reuniting. The political tensions that divide them are explicit but never laboured. It’s the story of two lovers who can never quite be together.

Joanna Kulig is Zuzanna, or “Zula,” a young singer who catches the eye of two musicians travelling the countryside recording folk songs and teaching young communists to perform them. Wictor (Tomasz Kot) is one of the musicians, a pianist who believes young Zula has a spark. His colleague isn’t sure: the girl blagged her way into the auditions and has served time in prison. They ask her why. “My father mistook me for my mother,” she says. “I used a knife to show him I wasn’t.” She passes probation and joins the troupe, which gains the approval of visiting party dignitaries.

The two become lovers, but Zula also warns Wiktor she is spying on him, reporting his words and actions to the commissar (Borys Szyc), who is her patron. When the troupe is invited to perform in Berlin, Wiktor sees a chance to defect, and urges Zula to join him. She is the shrewder, or more cautious, of the two. The film’s second act is set in the émigré bars of Paris; the third back in Poland, where the pair’s roles are in a sense reversed.

Pawlikowski, who based this love story loosely on that of his parents, has shot the film in black and white. Every shot is considered, many are dazzling and the screenplay’s sweep is handled with impressive economy. The performances are strikingly good, and Kot’s reserved intensity plays beautifully against Kulig’s tempestuousness.

Music powers the emotions of the film and it ranges wide: from the Polish folk song “Dwa Serduszka” (“Two Hearts”), plaintively performed a cappella then syncopated as a number for the troupe, through Cole Porter, Gershwin, Chopin (of course), Bill Haley, and Glenn Gould’s Goldberg Variations. Much is performed onscreen, including a drunken, impudent samba danced by Kulig. Kudos to arranger Marcin Masecki, and to all the musicians who contributed to this near-flawless film. •

Cinema | Somewhere between her time and ours, Queen Anne takes to the screen in The Favourite 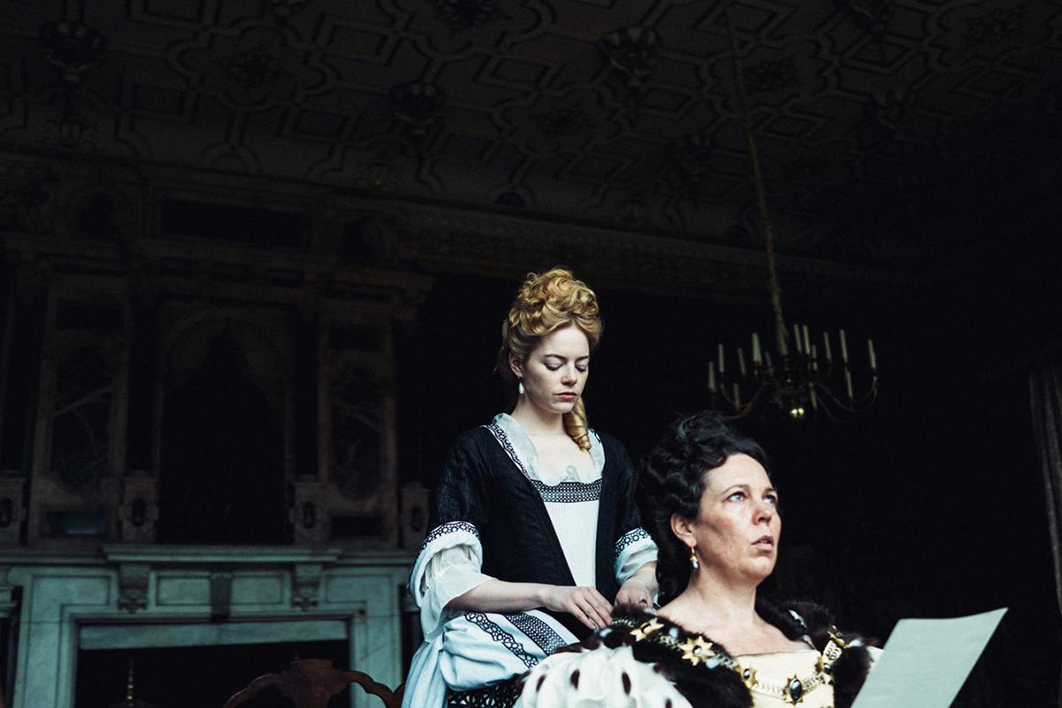