Rupert Murdoch’s sixtieth anniversary and the hazards of longevity

Rupert Murdoch may have set a world record for longevity in corporate governance, but his reputation would stand higher if he had retired ten years ago, writes Rodney Tiffen 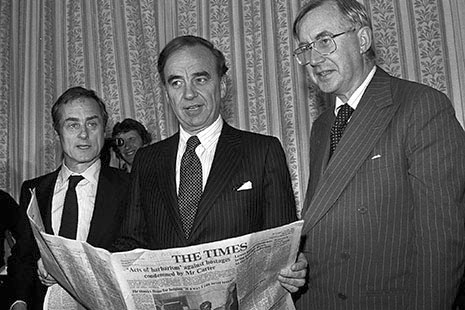 Back to London: Rupert Murdoch with Times editor Harold Evans (left) and former editor William Rees-Mogg after he bought the paper in 1981. PA Wire

EXACTLY sixty years ago, at just twenty-two years of age, Rupert Murdoch joined the board of the Adelaide-based newspaper company, News Limited, and set about creating first one powerful media company, and more recently two, in which he continues to play central roles. Murdoch has been in charge of News almost as long as Elizabeth II has been on the throne, and his sixty-year stint as director might well be a world record. With a personal fortune of $11.2 billion, he is now the ninety-first ranked billionaire on the planet.

Murdoch didn’t immediately assume executive power at News Limited, but he quickly began exercising control of the company he’d inherited following the death of his father, Sir Keith. By the end of 1954, according to Sir Norman Young, a News Limited director at the time, his dominance of the board was complete. Five years later, writes Young in his memoirs, Rupert displayed good business ability but also “a touch of arrogance.” He was reluctant to work in committee style, and wanted “good henchmen who would obey his orders on major issues without question.”

From the beginning, Murdoch was intent on expanding. His most important early move beyond Adelaide was to purchase the Sydney Daily Mirror. In fierce competition with Fairfax’s Sun, this racy afternoon paper helped Murdoch hone his tabloid skills and marketing strategies. In 1964 he began the national daily, the Australian, which aimed for the opposite end of the market, immediately lifted the standard of Australian journalism, and yet struggled to make a profit.

Although he continued to expand in Australia, from 1968 Murdoch’s main action was in England. That year, he bought the News of the World, the highest-selling Sunday newspaper in the English-speaking world, and the following year he launched a new tabloid daily, the Sun, whose success was the basis for all his future expansion. Supplemented by clever marketing and television advertising, the Sun beat the other English tabloids at their own sensationalist game. In less than a decade it had become the biggest-selling daily in Britain, a position it has held ever since.

In 1973, aged forty-two, he made his home in New York, which has been his headquarters almost continuously since. His most important acquisition there was the New York Post, which he sought to remodel along the lines of the London Sun, improving its circulation somewhat, arousing more controversy – a “force for evil,” thought the Columbia Journalism Review – but never making a profit.

In 1981, just shy of his fiftieth birthday, he bought the London Times. Until this time he had been mainly concerned with newspapers, and the crude political bias of his newspaper campaigns and the sensationalism of his tabloids had already created more controversy than any other contemporary media mogul. If Murdoch had retired at that point, however, his career would have been considered a great business success.

But his most tumultuous and manic decade, in a business sense, was just beginning. During his fifties the centre of gravity of his business operations moved decisively from Britain and Australia to the United States and from print into television and film. Having become an American citizen in 1985, he started a fourth TV network to challenge the three established American networks, and acquired the Twentieth Century Fox film studios.

But while Murdoch’s moves during this period could be called bold, that boldness several times crossed into recklessness. As the Australian Financial Review’s Neil Chenoweth has documented, in late 1990, just months before Murdoch’s sixtieth birthday, News had to reschedule a breathtaking $7.6 billion in loans from 146 institutions. If an amount of this magnitude had been owed to one bank, it is likely that Murdoch would have gone bust, or at least his empire would have been radically reduced. But the long-term value of his assets and the very complexity of his arrangements saved him. The banks entered into a new settlement that rescued him from this debt crisis.

Murdoch’s greatest successes in the 1990s, when he was in his sixties, were his ventures into subscription and especially satellite television, and particularly BSkyB in Britain and Star TV in Asia. Although he also made bold conquests in established media territories, it was in these new markets that he was a genuine visionary and gained first-mover advantages. He took great risks and reaped great rewards.

Characteristically, these deals were not without controversy. He shamelessly but vainly kowtowed before the Chinese government and traduced journalistic and publishing principles in an attempt to gain direct access to the Chinese market for his satellite services. Despite many missteps in trying to establish a satellite service in the United States, he finally secured DirecTV in 2003 – the culmination, he said, of a long-term effort to secure “the missing link in a global satellite television platform that will span four continents and encompass twenty-three million subscribers.”

Murdoch’s last great win against the odds was the creation of Fox News in 1996, which became a fusion of commercial success and political mission. Fox’s propagandistic approach to journalism has created much criticism and distrust, and produced many instances of what other organisations would consider professional disgrace. But the network has succeeded in attracting a small but sufficiently large audience to make its cheap operation – it invests much less in reporting than does its competitor CNN – extremely profitable, a few years ago earning around a fifth of Murdoch’s global profits.

It was on the fiftieth anniversary of his appointment to the News Limited board, in 2003, that Murdoch should have retired. DirecTV had been bought, Fox News was profitable, many of his film, TV and newspaper ventures were going well, and his business reputation was at a peak.

Since then, his business acumen has suffered a series of blows as a result of bad moves, retreats, and a failure to confront difficult challenges. He was forced to abandon his ambitions to conquer the Chinese market. Like many other media companies, he struggled to retain value in the age of the internet and has made some spectacularly bad moves, most notably buying MySpace for $580 million in 2003 and selling it for just $35 million in 2011. He disposed of DirecTV, so crucial to his aims for so long, principally to get his competitor John Malone to sell out his shares in News Corp, which were potentially blocking his own dynastic ambitions. It proved to be a good deal for Malone and a bad one for News Corp shareholders, as DirecTV has continued to thrive.

In 2007, he made one of the most spectacularly overpriced media acquisitions of all time when he bought the Wall Street Journal for $5.6 billion, only to write down its value by half in less than two years. Several of his newspapers are making record losses – most spectacularly the New York Post, which is said to be losing $100 million a year – with no end in sight.

Nor are these good times for Murdoch professionally and politically. His Australian newspapers are celebrating the election of Tony Abbott, which some of them, notably Sydney’s Daily Telegraph, campaigned for with as much bias as Murdoch’s papers showed when they opposed Gough Whitlam’s government in 1975. But what they displayed more than anything during that campaign was how little sense they have of either a business or professional strategy to meet the challenges of shrinking circulations.

In the United States, the current budget deadlock is very much a result of the Tea Party’s confrontational politics, a stance fostered and abetted by Fox News. This crisis of governance will put both the Tea Party and Fox News under critical scrutiny. While the Democrats are the most obvious casualty of Fox’s jaundiced journalism, moderate Republicans are also its victims, and its simplistic views have helped induce a crisis in American politics just as Murdoch reaches his milestone.

In Britain over the coming months, meanwhile, several former employees of News International will be facing criminal charges for phone hacking and bribery. These scandals have done enormous damage to the Murdoch brand, and could see trusted lieutenants go to jail. They are likely to make Murdoch’s sixty-first year as head of his empire an uncomfortable one, but it is unlikely that any of his senior managers will be telling him that he could best serve the company by retiring. •

Rodney Tiffen’s Rupert Murdoch: A Reassessment will be published in February by NewSouth.

Race in the dock

A murder trial in Alice Springs held up a mirror to the town’s dealings with issues of race, writes Kieran Finnane, and the inter-racial dynamics turned out to be not nearly as clearcut as might be expected 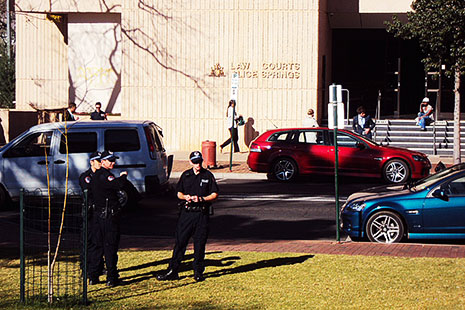