With the Taiwan dilemma deepening, Australia might be forced to take a stand 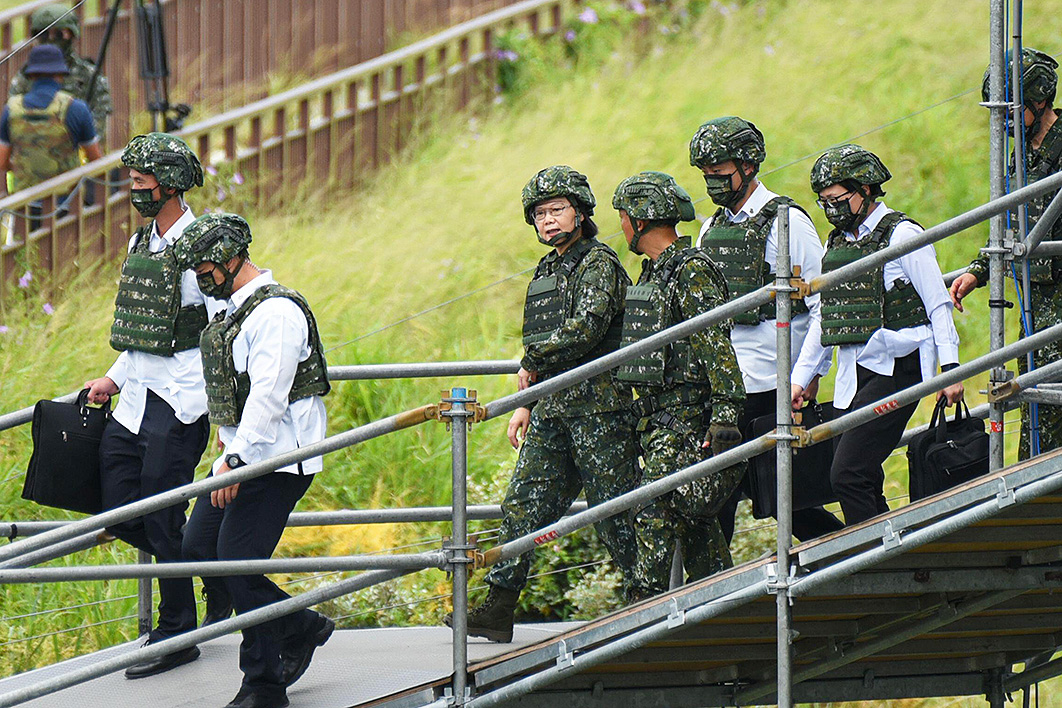 As the United States gets closer to an unusually divisive election potentially followed by months of distracting disputation, will China take the immense gamble of trying to invade Taiwan, or at least strangle it into submission? If so, Australia may suddenly face the moment when it has to “choose” between its main customer, China, and its historical defence guarantor, the United States, which is obliged by its own law to defend Taiwan. Whatever the outcome, it would be a stark no-win for Australia.

“If the US doesn’t come to the defence of Taiwan then that will mark the end of the US alliance system in the Asia-Pacific region,” says the Australian National University’s Paul Dibb, who developed the groundbreaking “defence of Australia” doctrine as deputy secretary of the defence department in the 1980s. “Japan and South Korea would be likely to reconsider the option of acquiring their own nuclear weapons.” But if the United States defends Taiwan and Australia refuses to join in, adds Dibb, “that may well threaten the raison d’être for the ANZUS treaty.”

A Chinese victory would end American hegemony in the Western Pacific, breaking the “First Island Chain” from Japan through the Philippines to Indonesia, a series of channels wired by the United States to detect Chinese submarines heading into the Pacific. For Japan, it would bring Chinese power right up against the Okinawa Islands, a tributary state that played off Japan and China until it was annexed by a modernising Japan in the nineteenth century.

A defeat for Beijing, on the other hand, would have unpredictable consequences for China itself, shaking Xi Jinping’s leadership and the Communist Party’s mystique, and creating domestic (as well as global) economic shockwaves — so much so that Beijing could even resort to nuclear weapons to stave off the possibility, a scenario some hawkish Chinese colonels paint in supposedly unofficial writings.

Speculation about the possible scenarios has been feverish in strategic policy circles, where analysts have noted the rising urgency of Xi’s calls for “reunification” of the island, a goal he says can no longer be passed “from generation to generation.” The qualification “peaceful” has been dropped, and Xi has ordered the People’s Liberation Army to be ready for war.

In the United States, meanwhile, next Tuesday’s vote won’t necessarily end the political distraction. As Gideon Rachman wrote last week in the Financial Times, “Beijing’s window of opportunity could look even more tempting after the US has voted on November 3 — particularly if the election result is disputed and the country is plunged into a political and constitutional crisis.”

Despite the risks, it almost seems as if Donald Trump has been trying to provoke Beijing into a military gambit. An “October surprise” of this kind might have provided a pretext to claw back his voting base with a show of arms. The recent official visits to Taiwan by his health secretary and a State Department under-secretary were the highest-level — and most provocative — engagements in decades, and this month Washington announced the sale to Taiwan of US$1.8 billion in precision missiles capable of hitting targets on the mainland side of the Taiwan Strait.

So far, a week out from the US vote, Xi has not risen to that bait. Nor do reports suggest a mobilisation of People’s Liberation Army troops of the size necessary to launch an invasion across the 120 kilometre–wide Taiwan Strait. But that doesn’t preclude other more symbolic shows of force against the small islands held by Taiwan along the mainland coast or in the South China Sea, or naval and air probes to wear down Taipei’s forces.

Is defending Taiwan worth the risks? In the early 1980s — a decade after Richard Nixon met Chinese premier Mao Zedong as part of the American president’s grand play against the Soviet Union, and a few years after Washington moved its embassy from Taipei to Beijing — it didn’t seem so. A moribund dictatorship of the Kuomintang, or Chinese Nationalist Party, ruled the island, having regrouped there in 1949 after defeat by the communists on the mainland. Its secret police and underworld friends murdered dissidents at home and overseas.

Mao’s death in 1976 and the rise to power of the pragmatic Deng Xiaoping had begun opening up China. Hu Yaobang, Zhang Zemin and other younger leaders began experimenting with free enterprise. Neither side of the strait was politically liberal or democratic, but the economies, at least, were converging. And hadn’t Taiwan been part of China since 1683?

But then the Taiwanese president Chiang Ching-Kuo began easing the government’s tight grip. He appointed Taiwan-born, US-educated Lee Teng-hui as his vice-president, allowed the opposition Democratic Progressive Party to form in 1986, and lifted martial law, after thirty-eight years, in 1987.

When Chiang died in 1988, Lee became president and pursued political reforms, kicking the members purporting to represent mainland electorates out of the legislature and filling it with Taiwan-elected members. In 1996, when Lee became the first directly elected president in Chinese history, Beijing fired missiles into the Taiwan Strait to express its disapproval. The Democratic Progressive Party and the Kuomintang have alternated in power since Lee retired in 2000.

Mainland China, by contrast, ended the 1980s with the crushing of hopes of political evolution in Tiananmen Square. Since then, it has pursued its version of mixed capitalism under rigid party control with a resolve that has only intensified since Xi took power at the end of 2012. Where Taiwan’s president is limited to two four-year terms, Xi has removed the Communist Party’s previously unwritten limit of two five-year terms.

Any hope of Beijing’s winning over Taiwan’s people with a “one country, two systems” formula has foundered with the clampdown on Hong Kong over the past two years, along with the frequent threats of last-resort military force if Taiwan tries to formalise its de facto independence. Resistance to this pressure helped the Democratic Progressive Party’s Tsai Ing-wen win a second term as president in January this year with a record margin of the vote. As well as electing its first female leader, Taiwan showed its social liberalisation by legalising same-sex marriage last year, a first in Asia.

Tsai presides over advanced living standards and a semiconductor and computer industry at the commanding heights of technology. Her country is also one of the largest outside investors in the People’s Republic of China, which is also its biggest trading partner.

Taiwanese authorities detected the seriousness of January’s Covid-19 outbreak in Wuhan before Beijing did. Its public health measures limited its own case numbers to 571 and deaths to seven. Well-targeted support for domestic consumption is forecast to yield 1.6 per cent economic growth this year, making it one of only two major economies not to contract because of the pandemic (the other being mainland China).

Taiwan, in short, has transformed itself over the last four decades. And certainly as long as Xi Jinping is in charge in Beijing, it is only going to move further away from identifying as primarily Chinese.

America’s ambiguous attitude to Taiwan is evident in the Taiwan Relations Act of 1979. Strong enough to deter any Chinese military moves — not that Beijing had much power-projection capability back then — it isn’t so strong as to make Taiwan think the United States will let it get away with a move as drastic as declaring independence.

Australia’s attitude is more explicit. Having transferred its embassy to Beijing in 1973, Canberra has long hoped that economic and political reform on the mainland will win over popular opinion in Taiwan and smooth the way for reunification. While it kept open a trade office in Taipei, it has taken the view that the island belonged ultimately to China.

During a period of cross-strait tension in 2004, I asked foreign minister Alexander Downer if the ANZUS treaty would oblige Australia to support US forces in a conflict over Taiwan. The treaty applied only to an attack on one or the other treaty partner, he replied, and was only an obligation to consult. His prime minister, John Howard, side-stepped the same question by declaring the issue “hypothetical.” The curtain of ambiguity came down again.

But some American figures made it clear that Australia would be expected to step up in the event of an armed clash. Much to Howard’s alarm, former deputy secretary of state Richard Armitage frequently said that Australians should be “fighting and dying” alongside Americans. When I spoke to academics close to the US Pacific Command in Hawaii after questioning Downer, they said that the Americans would expect both Japan and Australia to lend support, though in a back-up role more than at the forefront of any conflict.

It will be harder for Canberra to hide in the background if conflict erupts now. Australia’s armed forces have been equipped and configured to integrate with the Americans and operate in high-intensity conflicts. Australian officers are embedded in US command structures in the Pacific. Ships, submarines and aircraft are increasingly networked to US commanders. Our room for manoeuvre is sharply diminished.

The same is true for Japan. Its defence forces are also increasingly networked with the Americans, and its recent “reinterpretation” of its constitution allows Japanese forces to join collective security operations outside its own waters. Taiwan, which Japan took from China in the 1895 Sino-Japanese war and ruled until 1945, also has nostalgic appeal among Japanese conservatives. Japan’s new defence minister, Nobuo Kishi, is close to Taiwan, and attended the recent funeral of the former president Lee Teng-hui along with other MPs from the ruling Liberal Democratic Party. Like recently resigned prime minister Shinzo Abe, he is a grandson of wartime armaments minister and postwar prime minister Nobusuke Kishi.

A win by Joe Biden next week would not lessen American appreciation of Taiwan. “We’re a Pacific power, and we’ll stand with friends and allies to advance our shared prosperity, security, and values in the Asia-Pacific region,” Biden wrote last week in World Journal, the largest Chinese-language newspaper in the United States. “That includes deepening our ties with Taiwan,” he added, “a leading democracy, major economy, technology powerhouse — and a shining example of how an open society can effectively contain Covid-19.”

In Australia, only those retired from office are taking forthright positions. Tony Abbott wrote in the Australian in July that it was hard to see Australia standing aside from helping a “fellow liberal democracy.” On the other side, figures such as former Labor foreign minister Bob Carr tend to see Taiwan’s situation in the context of drawing back from Washington. In academia, the strategic “realists” accept as inevitable that China will get the Americans to back off, and don’t dwell on the likely consequences of a Taiwan conquered by the People’s Liberation Army: the purges of “traitors,” the mass “re-education” of millions of others, and the torrent of refugees to Okinawa and the Philippines.

But one analyst who doesn’t accept that inevitability is Paul Dibb. “It is in our interests to stand up for the defence of a successful democracy of twenty-four million people living on an island,” he argued recently. “Does that geography sound familiar to you? If Taiwan is not worth defending, why would anyone come to Australia’s defence?”

While in office, though, our politicians keep behind a thinning smokescreen of ambiguity, as Chinese military capability grows and America tires of foreign wars. • 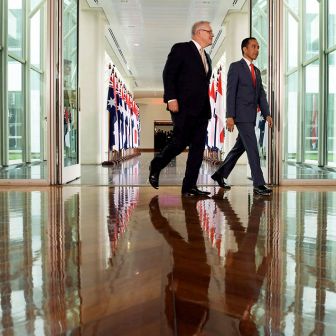 International Joe Biden’s foreign policy dilemma Barbara Keys 24 November 2020 Will the new president do more than simply return to the policies of the past?
Close

Carrying on till she’s carried out

Books | Silence may be golden, says Madeleine Albright, but it won’t win many arguments 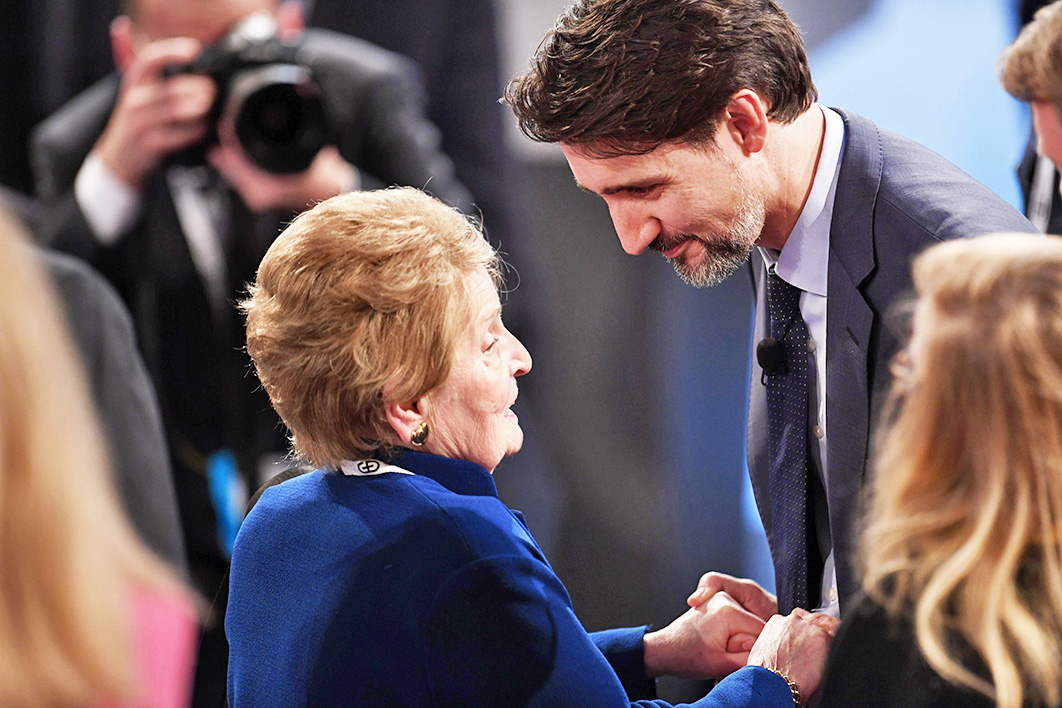