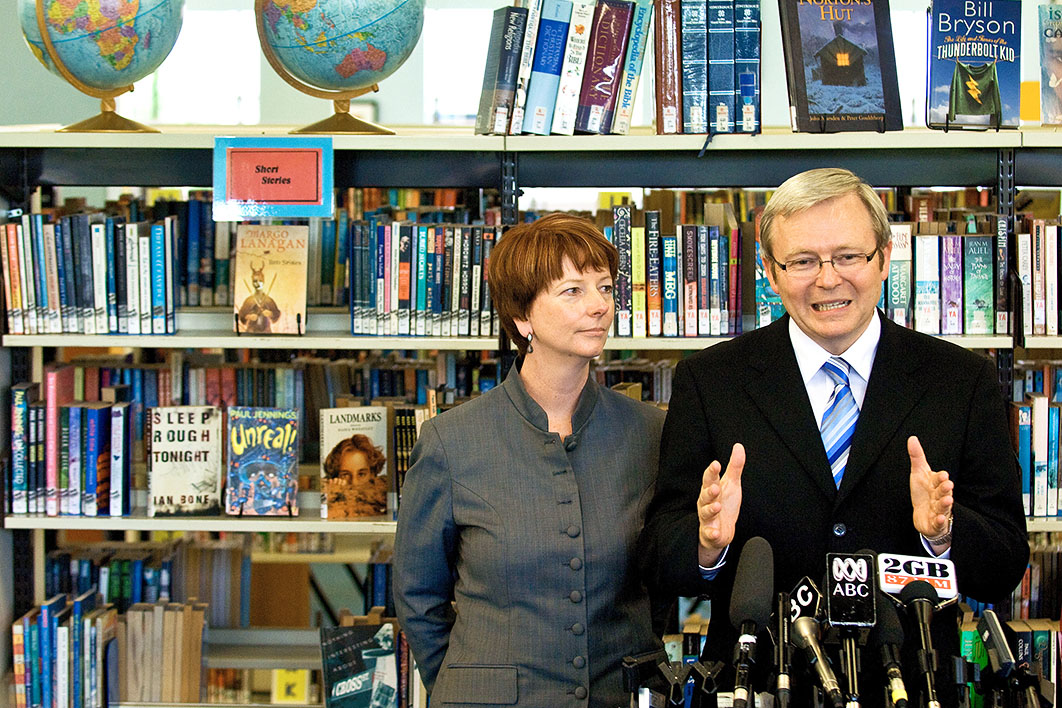 A decade on, all this stands like Shelley’s Ozymandias, that colossal Wreck on which is inscribed: “Top 5 by ’25.” Even by its own miserable measure, the revolution failed, utterly. Australian schools have not raced up the OECD league table, as was promised. To the contrary, they are further away from the international Top Five than ever. Others have raced, we have languished. Where did it all go so badly, so hopelessly wrong?

Although Savage disclaims any concern with that question, he provides an important part of an answer in his penetrating analysis, the fruit of in-depth interviews with eighty-odd Australian and international “policy actors,” close scrutiny of the revolution’s myriad speeches, statements, reviews and polemics, and all the latest in “policy studies” theorising.

Savage finds three substantial defects in the apparatus of revolution. First, a “playbook” of reform, a manual of measures and strategies promulgated by the OECD and made just about compulsory by its standardised testing and international league tables. The playbook and its enforcement, eerily reminiscent of the textbook and the Friday test, turned platitudes about “evidence,” “outcomes,” “evidence-based policy” and “evidence-based practice” into a stifling orthodoxy; larger ways of thinking about schooling and its purposes were pushed to the margins or extinguished altogether.

Second, and particularly damaging in Australia, was a mania for “alignment.” “Alignment thinking” drove a massive effort to line up everything from new national institutions to the daily work of every teacher in every school behind the great task of lifting “outcomes” in the “fundamentals.”

Third, and underlying both the playbook and the alignment push, was a “techno-scientific” cast of mind that discounted practical know-how and local knowledge in favour of purportedly universal, evidence-based assertions about “what works.” Linear minds, Savage argues, set out to seduce the non-linear world of schooling “with the alluring promise of order, certainty and progress.” In practice, this overweening drive for order generated disorder of several kinds: pushback by the states and territories against Canberra and its obsessions; a complicated, confusing “policy environment” in which “policy actors” were never quite sure who was “steering the ship”; and a “disconnect” between what policy said and what was done in its name.

Savage’s analysis of the inner workings of the education revolution is quietly devastating, but he resists the temptation to dance upon its grave. What the revolution has wrought, he seems to suggest, is what we’ve now got, and we’ll have to make the best of it. Policy and policymakers need to be more respectful of difference in thinking and practice, and more tolerant of at least some disorder. Above all, they must end their “romance with rationalisation.”

I can second most of these motions without expecting them to be carried, for reasons more apparent to old-fashioned political history than to policy studies. The problem with the “education revolution” was not that it carried out the most wide-reaching and comprehensive reform of Australian schooling policy in the nation’s history, but that it didn’t. With the partial exception of the Gonski funding proposals, Rudd and Gillard left the unique, dysfunctional fundamentals of the Australian school system unnamed and untouched: three “sectors,” each with its own sources and levels of funding, regulation of student selection and choice, and form of government; each sector represented in each of the eight states and territories, making a total of twenty-four “jurisdictions”; and two levels of government, the state/territory and the federal, closely engaged in every jurisdiction.

Problems arising go well beyond a confusing “policy environment” in which “policy actors” are never quite sure who is “steering the ship.” No one steers the ship, or can. With the possible exception of a handful of powerful independent schools, no agency — not the jurisdictions, not the states/territories, not the Commonwealth and not the newly installed national machinery — has the scope of control and responsibility or the stability of direction needed to change anything of real educational significance.

This incompetent machinery is heavily defended. Around the sectors have formed ethnic, religious and class-based interest groups, all in for their chop, each intent upon defending its patch and willing to frustrate any larger scheme that might threaten it. Specifically, as was seen in the sad case of Gonski, the two non-government sectors will go to war over any change to funding or regulatory arrangements that might interfere with prosperity won at the expense of the government sector.

On this divisive and counterproductive organisation of schooling — the timid effort to change school funding excepted — the revolution had no policy. These matters therefore fall outside Savage’s analysis too. “Policy studies” study what “policy actors” do and say, not what they fail to do. A larger kind of “policy studies” would be less inclined to take its cue from “policy,” less interested in critique, less focused on the machinery of policy, and more interested in working out what needs to be done about the deformed structure of Australian schooling.

A first submission: get the feds out of schooling; in each state/territory, move towards a framework of funding and regulation common to all schools; and install within each state/territory a statutory body to keep schools at a safe distance from ever-changing ministers and governments. •

Dean Ashenden is a senior honorary fellow at the Melbourne Graduate School of Education.