Scotland, the day after

A clear vote against Scotland’s independence closes a national argument but opens a UK-wide one, says David Hayes in Edinburgh 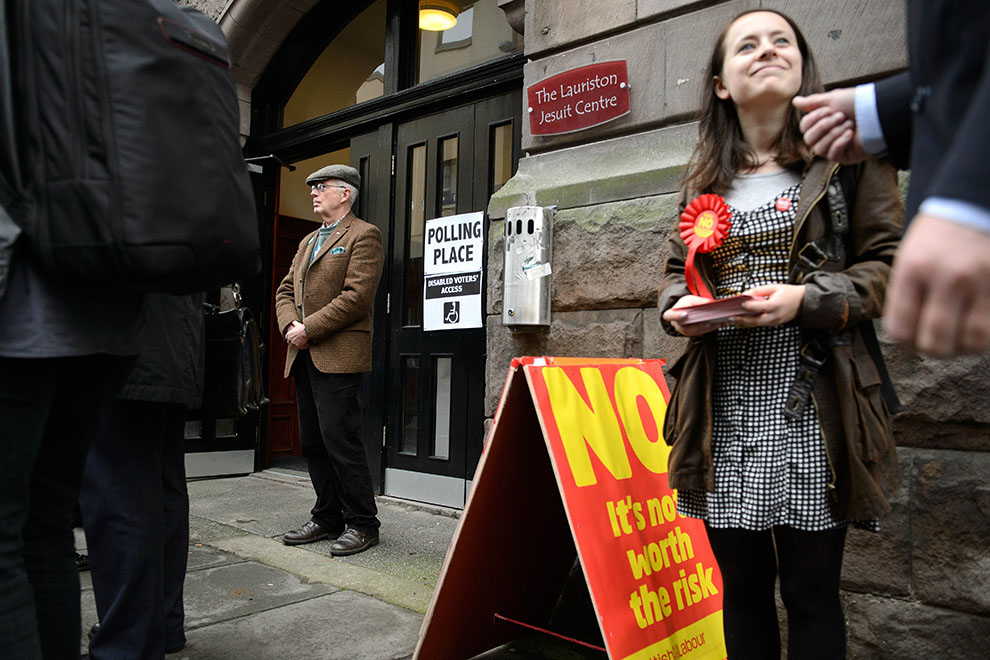 The light mist of a damp early morning had lifted in leafy south Edinburgh by the time most voters had begun arriving at local polling stations. Even allowing for the hour and the city’s habitual reticence, there was a stillness about the streets that seemed appropriate to the weight of the decision its citizens, like those across Scotland, were today being asked to make. The rare sense of being part of history – even of contributing to making it – was surely uppermost in the minds of many as they entered the booth. No wonder that it was tempting, in picking up the ballot paper with its stark yet beguiling question and two blank boxes – even if the mind was already made up – to pause consciously before placing the cross, to try to feel the moment. This is it: no going back. The momentous nature of the choice – “Should Scotland become an independent country?” – encouraged a sense of solemnity. Some voters in east Renfrewshire, south of Glasgow, had reportedly kissed their ballots. Others confessed to being close to tears. “An extremely important day for Scotland, and probably the most important day of my life,” a man in Edinburgh’s prosperous New Town told the BBC. By dawn on Friday, the individual stories were becoming part of a noble collective one, stitches in a political version of the “great tapestry of Scotland.”

If the act of voting cut to the heart, so too did the end of the process. In the minutes after the 5579 polling depots closed at 10 pm on 18 September, a YouGov exit survey suggested – according to its president, Peter Kellner – that Scots had delivered a clear “no.” This single piece of evidence predicted a final “no” lead of 8 per cent, larger than the 4 to 6 suggested by the opinion polls of the campaign’s last few days.

The exit poll framed much of the ensuing media coverage, especially as there were hours to fill until the first result was declared at – it turned out – 1.30 am. That came from Clackmannanshire, a small council area in central Scotland, and found a politically significant majority of 54 per cent to 46 per cent for the “no” camp. (The votes were being counted on the basis of the country’s thirty-two local authorities – from the smallest, the still widely Gaelic-speaking Na h-Eileanan Siar along the northwest coastline, to the largest, Glasgow – then collated on a nationwide basis.)

The results came in a trickle, then a waterfall: the northern isles of Orkney and Shetland emphatically “no,” Na h-Eileanan Siar and Inverclyde narrowly so. Renfrewshire was also “no” – a bitter defeat, this, for “yes”. The city of Dundee, both a heartland of the Scottish National Party, or SNP, and so often contrarian, delivered a big but not overwhelming “yes,” and Midlothian a crucial “no.”

The sheer demographic weight of urban west-central Scotland, for decades a Labour bastion and a target of the SNP, meant the region was always going to be pivotal. The fiercest contest was over Glasgow, the country’s biggest city and commercial hub. When a “yes” majority of only 53 per cent came through there, it confirmed the tenor of the entire night: that the pro-independence juggernaut, which had briefly looked on course after a sensational poll of 7 September gave it a one-point lead, had stalled at a late stage.

At last, the chief counting officer Mary Pitcaithly announced the national tally at 7 am on 19 September (though the Highland region, with its 191,000 votes, was yet to declare). It showed that 1,914,187 Scots had so far voted “no” and 1,539,920 “yes” – in percentage terms, 55–45. The results, for all the local variations, gave the impression of striking consistency. That this was the will of a clear Scottish majority was palpable.

A galvanising campaign was over. The result was close enough – if only just – to moderate the winning side’s euphoria, but the profound relief of Britain’s political establishment was already seeping through every media pore.

There was shared agreement, though, that this period had seen an invigoration of Scottish democracy. Scotland’s fissured geography can give its different regions a feeling of remoteness from each other. Yet across the country, in a system where voting is voluntary, as many as 97 per cent of those eligible (4,285,323 people) had registered. Turnout everywhere was, in modern terms at least, impressive: 85–91 per cent in Stirling, Angus, Midlothian, West Lothian and Renfrewshire, 75–78 per cent in Glasgow and Dundee. At around 85 per cent overall, it exceeded the 83.9 per cent of the 1950 election in the United Kingdom, still the highest since 1945. By more direct comparison, the four elections to the Scottish parliament since 1999 produced turnouts of 59, 49, 52 and 50 per cent.

The Glasgow and Dundee outcomes – among the lowest of all the thirty-two areas – also revealed the limits of the much-heralded canvassing push by the “yes” side into those cities’ working-class districts. In the end fewer were reached, converted, or motivated than had been hoped. By the same token, the huge turnouts in regions where rural areas and small towns predominate – including the borders, southwest and central highlands – reflect the solidity and passion of “no” sentiment, though everywhere there are mosaics and substantial minorities.

The underlying trends will be analysed in coming days, not least the possible late hardening of “no” opinion. The immediate pre-poll days had brought their share of drama. The former prime minister Gordon Brown’s sudden emergence as de facto leader of the unionist, “Better Together” effort had been capped by a brace of roaring speeches which injected the passion that his competent but subdued predecessor Alistair Darling was judged to have lacked. Brown’s furious appeal (“What we created together, let no nationalist split asunder. Our patriotic vision is bigger than nationalism; we want Scotland not leaving the UK, but leading the UK, and through leading the UK, leading in the world”) was acclaimed by the same Tory papers who had mocked him mercilessly when he was in Downing Street.

Bill Clinton issued a statement calling for the Scots to “vote to remain in the UK.” Barack Obama followed with a tweet praising the United Kingdom as “an extraordinary partner for America” and voicing the hope that “it remains strong, robust and united.” Spain’s centre-right prime minister Mariano Rajoy – who can hardly be blamed for having Catalonia on his mind – was more severe, telling Scots they would be excluded from the European Union in the event of a “yes,” and have to wait at least eight years for a chance of entry. Such a vote would be “a torpedo below the waterline of the European spirit,” he said.

Against this heavy weaponry, tennis star and local hero Andy Murray’s tweet criticising the “negativity” of the anti-independence side was more a pea-shooter. Yet what would have been a front-page story on any other day came just late enough to disappear into the broadcast media’s voting-day news purdah.

Elsewhere, perhaps some voters were influenced by a late burst of menacing harassment of “no” politicians by macho “yes” campaigners squawking “quisling” and “traitor”. The democratic disgrace was lovingly amplified beyond recognition by sections of the press. (The Sunday Herald was the only one of Scotland’s thirty-seven main newspapers to recommend a “yes” vote, though there were many degrees of partisanship.) The zealots’ self-inflicting damage, which included such low-level vandalism as the routine defacing of posters, must be part of the referendum inquests.

The reaction was jubilant and despairing in all the expected places. It was notable, however, that in public both sides were restrained, with talk immediately turning to the next stage of constitutional change and in particular the “home rule” démarche announced by Gordon Brown in response to the independistas’ brief poll breakthrough. The Tory grandee Michael Forsyth, a former hardcore opponent of any devolution of power to Scotland, declared that the next settlement should involve Scotland having greater financial responsibility – a persistent theme of the current Conservative leader in Scotland, Ruth Davidson, who also wants the “pocket-money parliament” in Edinburgh to grow up.

These seeds of a provisional post-referendum consensus in Scotland will find it hard to fertilise once disagreement over detail starts to bite. But it is in and with London that the next contest will be. The frightening late advance of the “yes” campaign forced a notional cross-party commitment to increased powers for Scotland, as well as to quasi-federal reform across the United Kingdom, not least England and its cities and regions. Both, connected, initiatives will soon meet two obstacles: the rooted lack of political consensus in England, and the unmatched ability of London’s sedimented power to deflect and undercut any unwanted ambitions. What happens then?

In Scotland, the winners of this campaign are obvious. Gordon Brown, though his biggest task, to entrench the promises he was finally able to extract from a first dilatory and then desperate UK government, is to come; and Nicola Sturgeon, the long-term deputy of SNP leader and Scotland’s first minister Alex Salmond. The equally assured, but less abrasive Sturgeon may have to wait, perhaps until after the next Scottish elections in 2016; but when Salmond does leave the stage, she will be a formidable successor. In the meantime, the SNP has key strategic decisions to make about its attitude to the “home rule” initiative.

As for David Cameron, the UK prime minister, the whole Scottish referendum process has confirmed in plain sight his political and intellectual weaknesses: complacency, inattention, superficiality. He is a good manager of the United Kingdom’s decline. But neither he nor the United Kingdom itself will be able to survive many more victories like this one.

Above all, though, Scotland’s independence referendum from start to finish has been a great moment of democracy. After a three-year campaign, Scots participated in unprecedented numbers in deciding the future of their country. Along the way, they did indeed obtain, or at least secure the promise of, a constitutional design that wasn’t even on the ballot paper. The door to the future remains open. •

Revised: Amended 27 September 2014 to correct a reversal of the yes/no voting figures.

Tony Abbott intervened in Scotland’s referendum debate last month, worried about the threat to the Anglosphere. But independence is on the cards closer to home, writes Nic Maclellan

Pollsters report a late surge in support for the Yes campaign in Scotland. Cams/Flickr 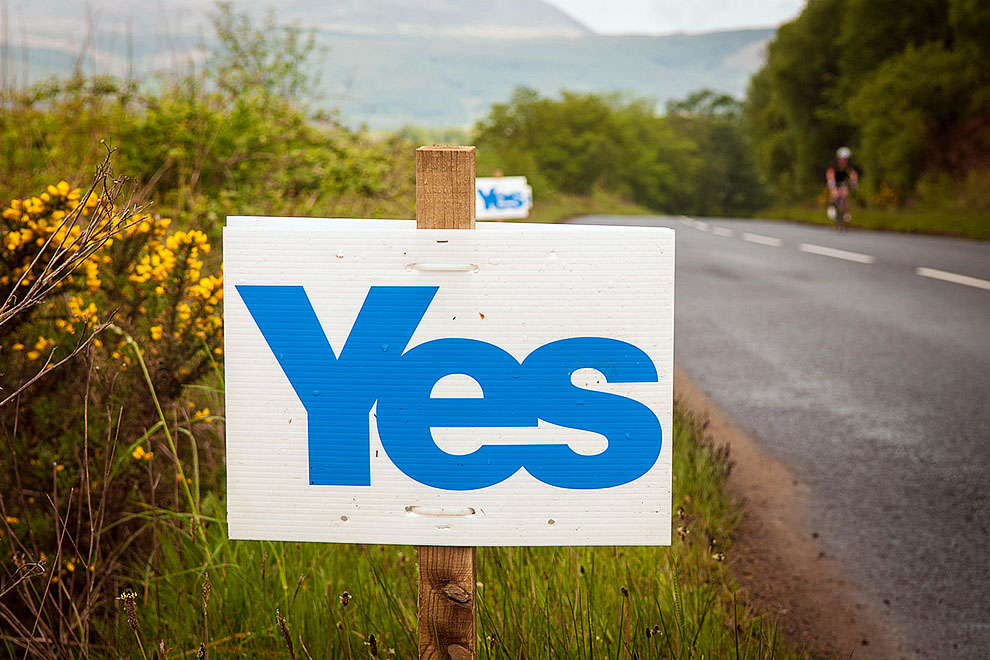 Pollsters report a late surge in support for the Yes campaign in Scotland. Cams/Flickr