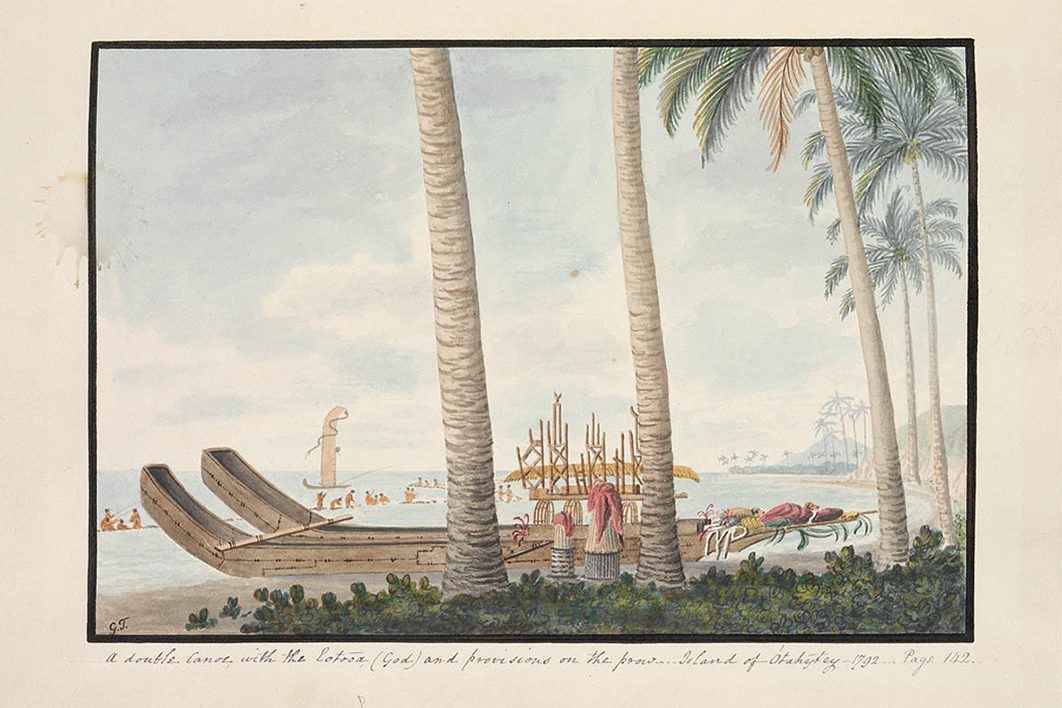 Voyagers: The Settlement of the Pacific
By Nicholas Thomas | Head of Zeus | $35 | 228 pages

If some hemispheres are mainly terrestrial continents with watery edges, the Pacific hemisphere is the inverse. Mainly water with tiny, scattered islands, it was famously and beautifully rendered by Tongan anthropologist Epeli Hauʻofa as a “sea of islands.” It is known best by its longstanding inhabitants, whose lives are shaped by its waters, its winds and its earthly and celestial bodies.

Australian anthropologist Nicholas Thomas’s new book starts with that knowledge. In this account of what is known about the great historic voyages and voyagers across the Pacific, we journey with him backwards and forwards in time, following winds and currents from the east to the west and north to the south of what was once called mar del sur, the South Sea. Thomas is the umpteenth anthropologist or archaeologist or historian to take readers on this journey, and one of the best.

Knowledge of the great canoe voyages that settled islands as distant as Aotearoa/New Zealand and Rapa Nui/Easter Island resides in Islander histories and culture, and has enchanted human and social scientists for as long as the connection between them has been known. Anthropologists and linguists, archaeologists and historians have tried to pin down where, when, how and, elusively, why the ancestors of Polynesians, Melanesians and Micronesians travelled so far, settling islands thousands of kilometres apart.

Voyagers is a long, richly illustrated essay setting out these arguments. It is also, in one sense, the backstory of Thomas’s own discipline and his position as director of the Museum of Archaeology and Anthropology in Cambridge.

Some of Thomas’s disciplinary predecessors were both from the Pacific and scholars of the Pacific. He sets out the career and ideas of Te Rangi Hīroa (also known as Peter Buck, 1877–1951), for example, Māori physician, anthropologist and director of Honolulu’s Bishop Museum. Hīroa wrote Vikings of the Sunrise (later published as Vikings of the Pacific) in the mid 1930s, seeking to publicise Polynesian maritime history, geography and culture, and detailing the navigational knowledge that enabled journeys between Tonga, the Cook Islands, Samoa, New Zealand, Hawai’i, the Marquesas and more.

Hīroa was one of many to consider and reconsider, just like Thomas, the various theses of Pacific migration and ancient connection through seafaring. In the 1930s, he favoured an early Indonesian then Micronesian route over what was then the more popular thesis of a Melanesian entry into the Pacific. “Where” and especially “when” have endured as major lines of inquiry in the archaeology, anthropology and history of Oceania.

The most gripping part of Voyagers, however, is Thomas’s exploration of the “how”: the technicalities of different kinds of Islander wayfinding and navigation, of canoe construction and design. Precisely how mariners, then and now, fix their position and their direction from rising and setting stars, triangulating with islands that are not necessarily, and perhaps even rarely, in view, is fascinating and ultimately more interesting than speculations about “why.”

Thomas explains the technique and tradition of fixed departure points from various islands, coordinated with a specific rising star. He shows how eighteenth- and nineteenth-century European navigators noted, with real interest drawn from their own experiential knowledge, how Pacific voyagers typically departed from a particular point on the coast — a point that stayed fixed as the canoe sailed offshore and was then aligned and coordinated with a particular star that was known to direct the way to a known island. There was a temporal dimension, then, to departure: losing sight of that landmark had to align with the rise of the celestial mark, the particular evening star, itself located within a group of surrounding stars as fixed points.

Thomas has been reading and re-reading eighteenth- and nineteenth-century accounts of Pacific voyages for decades. He knows the British, German, Dutch and French expeditions as intimately as anyone. He doesn’t shy away from the impacts of European colonialism, but this (refreshingly) is not his “lesson” for the reader. His great knowledge allows us to discern a genuine and sometimes even humble interest in the European observers of Pacific voyaging. We can rely on him to keep finding surprising gems therein.

Divided by culture, history and language, the eighteenth- and nineteenth-century authors of so many expedition accounts were not just mariners but often navigators too. Of course they looked and listened and learned from what Islanders were doing. If they remarked on the curious Islander pattern of departing from a particular place, not any place, there was likely something to it; after all, the Islanders had specialist knowledge held by few, if any, others, even the ocean sailors of the world.

Popular fascination with Pacific voyagers is greater than for other seas and other journeys in the oceanic world. Thomas traces and explains the enduring interest that saw generations of re-enactments, canonically the Kon-Tiki expedition in the late 1940s, that have sought to validate theses about connections between South America and Polynesia. Over the 1970s and 80s a sub-industry emerged, both evidentiary and educational, including the longstanding expeditions of the Honolulu-based Polynesian Voyaging Society. With his great museological knowledge, the polymathic Thomas is able to explain to us just where and how these re-enactments modelled their vessels, and how accurately. Those early canoes might have been sketched by artists on the Dampier, Wallis, Cook and D’Urville voyages, but less than a handful of genuinely old canoes remain, and Thomas knows where to find them.

This is a book filled with material culture — pottery, artefacts, a Tahitian adze with coconut-fibre binding collected on one of Cook’s voyages. It is filled also with language, the diverse yet often linked vocabularies across Oceania, and the work of those who tried to make sense of them. And our own wayfinding within this book is marked by charts and maps, a design of real beauty.

The maps and charts that open the book immediately humble anyone who thinks they know the Pacific. We can readily recognise “Oceania” as a whole, from Papua New Guinea and Australia across to Rapa Nui, and from the Chatham Islands south of Aotearoa/New Zealand to Hawai’i. But turn the page and we see all the islands that make up Vanuatu and the Solomon Islands, known to few but those for whom they are home, and to brokers like Thomas. Saipan and Tinian in the Northern Mariana Islands, and Enewetak and Rongelap in the Marshall Islands, Atafu and Fakaofo in the Tokelau Islands; these are places with specific histories of voyaging that Thomas insists — but lightly — we also need to recognise.

As we would expect, James Cook is important in this account. Thomas is a Cook expert, no doubt about it. As he explains to us, Cook was one of many, including the earlier William Dampier, to think about, listen to and learn from other voyagers within and across the South Sea. Many of them sketched and painted the images from his three Pacific voyages that illustrate this book.

Some of the precious artefacts collected, exchanged or occasionally simply taken during those voyages serve as evidence for Thomas’s adjudication of various theses on the where, when, how and why of Pacific canoe voyages. Some, indeed, are treasured in Thomas’s own museum in Cambridge. Some of the linguistic information gathered by Cook, his officers and his mariners likewise serves as evidence, calibrated alongside many current languages and the archaeological evidence, especially of the “Lapita” pottery.

Occasionally Thomas describes his own, often fascinating, first-person encounters and “discoveries.” He tells us about a conference trip to Taiwan, for decades understood to be the deep-time departure point for that group of linguistically defined migrating Oceanic peoples known as the “Austronesians.” Although he knew the pattern of movement, he didn’t expect to recognise the tattoos in one of the remoter parts of Taiwan that he visited. They were similar to many he had seen across Oceania (he is also co-editor of Tattoo: Bodies, Art and Exchange in the Pacific and the West), offering a different kind of confirming evidence of deep historical and cultural connection.

This vignette reminded me of They Are We, Emma Christopher’s film about an Afro-Cuban community. Cultural practices — dances and songs ­— proved crucial in linking this small community with descendants of the same ancestors in Sierra Leone. The cultural recognition was clear, if direct in that instance and mediated in Thomas’s telling. And yet in Thomas’s instance, the material and cultural connection that survives as tattoos is a link over thousands of years, while Christopher’s instance is a link over hundreds of years.

For years now, historians and anthropologists of early colonial eras and encounters have been interested in the mediators, the go-betweens, the brokers. Tupaia is one of the better-known brokers between his own home and culture in the Society Islands and Banks, Cook and his men, as well as between and with Māori with whom Tupaia found he could talk. In 2018, indeed, Tupaia outshone Cook during Britain’s commemoration of the 250th anniversary of Cook’s first voyage in the Endeavour, which departed from Deptford in 1768.

In some ways Thomas is himself a skilled and knowledgeable go-between. With precision and deep learning, he surveys the written accounts, the voluminous expeditionary evidence, our current knowledge of Islanders across the various archipelagos, and extant material objects and artefacts. He is also a skilled broker of scholarly knowledge for the so-called “interested reader.”

Voyagers appears in The Landmark Library, published by Head of Zeus Press, “a record of the achievements of humankind from the late Stone Age to the present day, a kind of history of civilization.” The series is highly successful, with a tried and true brief that would equally be at home in the 1920s and 2020s. But who and what is Head of Zeus Press? This ten-year-old London-based independent publisher seems to have defied the odds, publishing hybrid e-books and strongly designed generalist non-fiction such as this. It has secured seasoned and award-winning authors like Thomas as well as debut authors.

The Landmark Library series offers an old-fashioned idea, “the history of civilisation,” that still has legs. But with books on Shakespeare, the British Museum, Magna Carta, the Royal Society, railways, Stonehenge and the Book of Kells, it’s a metropolitan not a cosmopolitan history of civilisation. Voyagers is a geographic and cultural outlier, and one wonders if it started its publishing-idea life as James Cook. If so, what a blessing to have Nicholas Thomas take it on and twist civilisation around and back again. •

Alison Bashford is Laureate Professor of History and Director of the Laureate Centre for History and Population at UNSW.