We need to reconsider the importance of Anzac Day, writes Geoffrey Barker 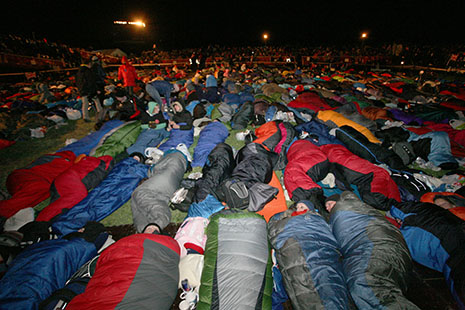 Crowds in sleeping bags at Anzac Cove for the dawn service at Gallipoli on 25 April. Ufuk Sarisen/AAP Image

AUSTRALIANS NEED to get over Anzac Day and consign Gallipoli, the Western Front, the Kokoda track and other battlefields to less prominent places in the national memory. It has been obvious in recent days that Anzac Day, and particularly the memorialisation of the first world war, has become a hugely bloated media event. Solemnity has become sentimentality; banality has triumphed over profundity in the contemplation of sacrifice.

For television and newspapers Anzac Day is like a football grand final. It is promoted weeks in advance with articles and programs that purport to “reveal” hitherto unknown material about the people and events in Australia’s military history. It has been packaged, commodified, and leached of significance, and it needs some time out for rest and recovery.

This year, on ABC television alone, we have seen a new and “miraculously saved” cache of photographs taken on the Western Front. We have seen a new statue unveiled in a Queensland town. We have seen two very young military historians plodding around Flanders fields saying things like “unbelievable” and “iconic.” A second world war soldier has spoken “for the first time” about his experiences. We have been invited to an interactive presentation of the first day at Gallipoli. There has even been a Gallipoli art prize.

All of this has preceded the coverage of dawn services at Gallipoli and in Australia and of marches in cities large and small across the continent. This year the global financial crisis doubtless reduced the numbers of flag-draped young Australians at the Anzac Cove service, but the growth of the event has been remarkable and is a tribute to the patience and generosity of the Turkish government.

It has been observed that the Anzac Cove pilgrims are apparently driven by some curious search for a spiritual dimension in their determinedly materialistic lives. They achieve this experience by travelling half-way across the world, wrapping themselves in flags, listening to the strangely moving music of The Last Post, watching the sunrise over the sea and absorbing some turgid military or ministerial rhetoric. These people are not Australian patriots; they are barrackers (often quite loud barrackers) for Australia. Anzac Day, a (one-day) international cricket match and the footy grand final are for them essentially the same experience of spectacle, symbolism and spiritual release.

These pilgrims should be encouraged instead to go into any of the thousands of quite nice churches that stand mostly empty around Australia. There, privately and alone, in silence and in a spirit of traditional holiness, they could contemplate the mass sacrifice of young men by old men at Gallipoli and the Western Front in a futile gesture of colonial solidarity. Alternatively they might simply treat Anzac Day as a holiday to be enjoyed with friends thanks to those who were slaughtered in wars throughout the twentieth century.

But there will, of course, be no retreat from the ongoing inflation of Anzac Day despite the passing of the last veteran from the first world war. With the hundredth anniversary of the Gallipoli landing now only a few years away, the show is going to get bigger and bigger. There will be more new books, and more elderly children of Anzacs appearing on TV to say that their father never talked about the war and was inevitably upset by the depiction of warfare in movies and on TV.

More “never- before- revealed” documentaries and discoveries will be produced to fascinate the barrackers and to reinforce their view that they are the descendants of heroes. Military historian Peter Stanley is reportedly writing a book about diggers involved in sex, crime, murder and mutiny during the first world war. It might provide an overdue correction, but it is unlikely to prompt any revision of the now established legend of the game Aussie digger.

An immature and backward-looking nationalism is at work here, a nationalism that finds its highest expression in the feats of arms of earlier generations and celebrates it as a sort of Roman holiday, wallowing in memories of suffering.

Of course we have a duty to history to remember and to honor sacrifices made in wartime. But we have turned Anzac Day into an annual spectacle designed to encourage what once would have been called jingoism. With Australian troops again in harm’s way in Afghanistan, it is time for less national chest-thumping. •