Shooting down the “girlie guns” 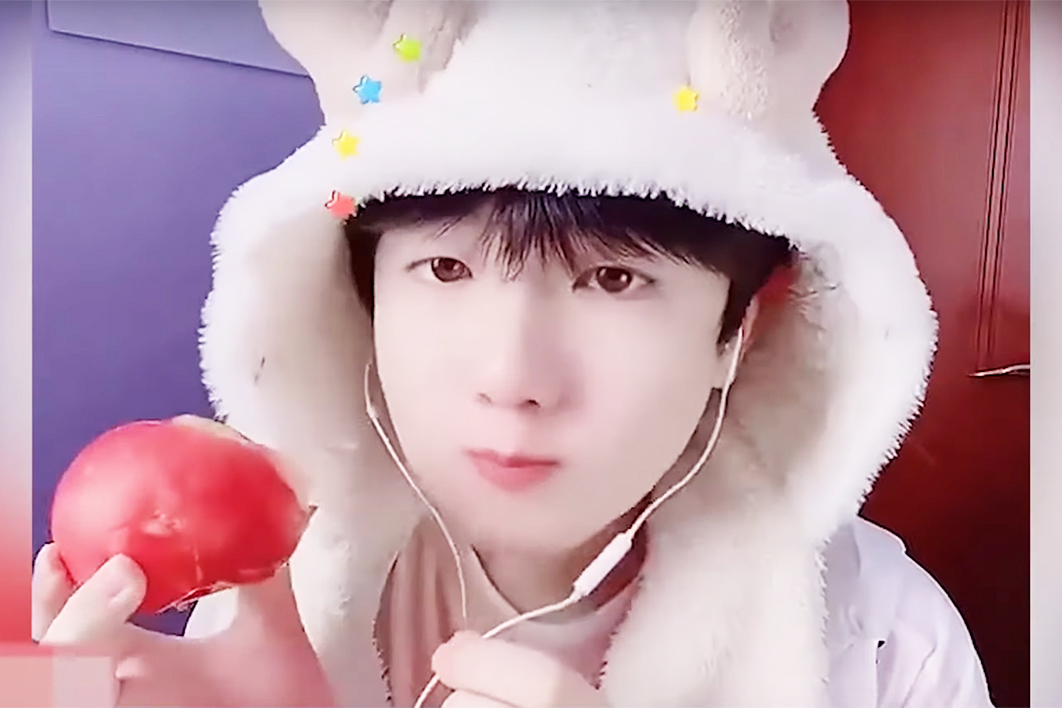 Earlier this year, a young man ate preserved peaches on Douyin, China’s TikTok, and internet users lost their collective mind. In the video, porcelain-skinned and coquettish under a fleecy white hood, Feng Xiaoyi holds up a glass jar of preserved peaches. With childish syntax, he intones, “Eat a peach peach.” He taps the jar. “Peach peach,” he pouts through rosy lips. Slurping down a spoonful, he screws up his face, and mewls, “So cold cold!”

Feng’s 600,000 followers gave the adorably weird video half a million likes within three days. Feng had already won fans and courted controversy by modelling, stunningly, the dress style known as qipao. But this time, he went one “peach peach” too far. Douyin banned him from the platform, officially for soliciting virtual gifts from minors but also, according to the Global Times, because “numerous netizens” complained that his videos lacked “masculinity.”

The Communist Party of China wants boys to harden up. It has gender-bending niangpao (“girlie guns”) like Feng in its sights, along with other offenders against cis-gendered heteronormativity such as K-pop-inspired “little fresh meat” boy bands and anyone whose initials even appear to include LGBTQI. “Girlie guns” don’t need to be as extreme as Feng Xiaoyi. They may simply be boys who like wearing nice clothes, enjoy shopping, or have close female friends, who are self-effacing, gentle and timid — all of which are deemed signs of excessive “feminisation.” The masculinity drive is part of its campaign against “unhealthy” social tendencies such as excessive online gaming, celebrity worship, and any expression of queer life in films and TV.

In June, the father of a seven-year-old boy became a hero to gender nonconformists after posting on Zhihu (a Quora-like website) about the day his son, who liked wearing skirts, wore one to school. The teacher harshly reprimanded him: “Boys should act like boys.” When female classmates leapt to his defence, saying boys should be “free” to wear dresses too, the teacher snapped that “freedom” was “an American thing.” The father decried the teacher’s intolerance. His post went viral, attracting tens of thousands of likes and mostly supportive comments.

Like their counterparts elsewhere, many mainland Chinese, especially younger ones, perceive rigid gender-based norms as oppressive. They are pushing back against the official promotion of “masculinity” across social media. Even some official media, including the Global Times, have published contrary views.

Yet party advisers, bloggers and others whose opinions dominate state media frame the problem of boys not “acting like boys” as nothing less than a threat to the survival of the nation. In a widely republished post, the ultra-leftist blogger Li Guangman wrote that “if we allow this generation of young people to lose their mettle and masculinity, then who needs an enemy — we will have brought destruction upon ourselves, much like the Soviet Union back in the day.” Vladimir Putin, alongside Jordan Peterson, is something of a pin-up for the boys-should-be-boys brigade.

Patriotism is embedded in native Chinese concepts of masculinity. A common phrase signifying a “manly” man, nanzi han, dates back about 2000 years, and originally described defenders of the Han dynasty against the Xiungnu, or Hun. As for the qualities that define masculinity, these are usually summed up as yanggang zhi qi — the qi, or vital essence, of yang (broadly: male, bright or positive energy) plus gang (morally upright). The phrase has etymological roots going back at least as far as the sixth century.

Yet it’s not strictly gender-specific, as acknowledged in the title of a recent education ministry document on the “problem” of “feminised” Chinese boys: “The Cultivation of yanggang zhi qi Doesn’t Distinguish between Male and Female.” The phrase denotes qualities of mind as expressed in speech and action. But officially sanctioned remedies for building up boys’ yanggang zhi qi focus on ramping up sports and physical education and recruiting more male teachers as role models, even those less qualified than their female counterparts.

The focus on physicality reflects a national anxiety that originated during the late Qing dynasty. Beginning in the 1840s, Western imperialist powers bullied and attacked the Qing for the right to push opium into China, establish semi-colonial enclaves in its ports and exploit the country’s resources. Reformist thinkers argued that in the “struggle for existence,” the “physical vigour” of the populace was as decisive as intelligence and moral rectitude. They promoted calisthenics and military drills. This push continued years after the republican revolution of 1911. In one of his first published essays, a young Mao Zedong wrote about the importance of exercise (for women too). Shortly after the revolution of 1949, the Communist Party introduced universal morning calisthenics, performed to radio broadcasts.

The party today speaks of the need to return to “revolutionary,” “socialist” and “traditional” masculinity. Yet both the revolution and the period of “socialist construction” that began in 1949 demanded physical strength and courage — yanggang zhi qi — from both men and women.

As for “traditional masculinity,” the classical ideal of manhood was an educated man who was upright, filial to his parents and ancestors, loyal to his ruler, and ideally a fine calligrapher and poet as well. The third-century warrior general Guan Yu, later immortalised as Guan Gong, the God of War, is typically portrayed with bright red skin, the result of his brimming yang energy — as “masculine” as it gets. Yet despite a lack of solid evidence that Guan Yu was literate, he is often represented holding a scroll as well as a weapon — further elevating his status in a society that esteemed men’s educational accomplishments over physical prowess.

Traditional culture offers many different types of male archetypes. As a number of recent commentators have wryly noted, Jia Baoyu, the female company–loving young male protagonist of the great eighteenth-century novel Story of the Stone, is an archetypal “girlie gun.” Just as the early twentieth-century male player of female roles, Mei Lanfang, created some of the most exquisite archetypes of femininity in the Peking Opera, so did a later female player of male roles, Pei Yanling, give opera fans some of the most indelible performances of heroic masculinity.

The odd thing about the current masculinity panic is that by any measure, China today is militarily and economically stronger than at any other time in the last 150 years. And for all the pretty boy actors and singers testing the party with their sculpted eyebrows and designer clothes, there are plenty of muscular, hard-bodied action stars like Wu Jing of the wildly popular Wolf Warrior films.

So what gives? Does the existence of more diverse forms of masculinity threaten the nation — or just the patriarchy? Lü Pin, founder of the banned media channel Feminist Voices, suggested the latter when she told America’s NBC News that “the concept of masculinity forces every man to be tough, which excludes and harms men with other types of characteristics. It also reinforces men’s hegemony, control and position over women.” The Global Times quoted a law professor who similarly argued that gender stereotypes victimise both men and women, trapping men in a “suffocating, outdated masculinity stereotype, which supposes being vulnerable means being emasculated” and excludes “fear, grief or tenderness.”

Promoting “masculinity,” in other words, could mean that men end up resembling a certain rugged-featured older bloke who posted one of a number of online “peach peach” parodies. His video simultaneously sends up Feng Xiaoyi and stereotyped notions of masculinity. In it, he bellows like a drill sergeant: “EAT PEACH PEACH!” Take that, men men! •