Shooting the picture: then and now

Much has changed since the earliest photojournalism, write Sally Young and Fay Anderson. But some challenges have made a comeback in the digital age 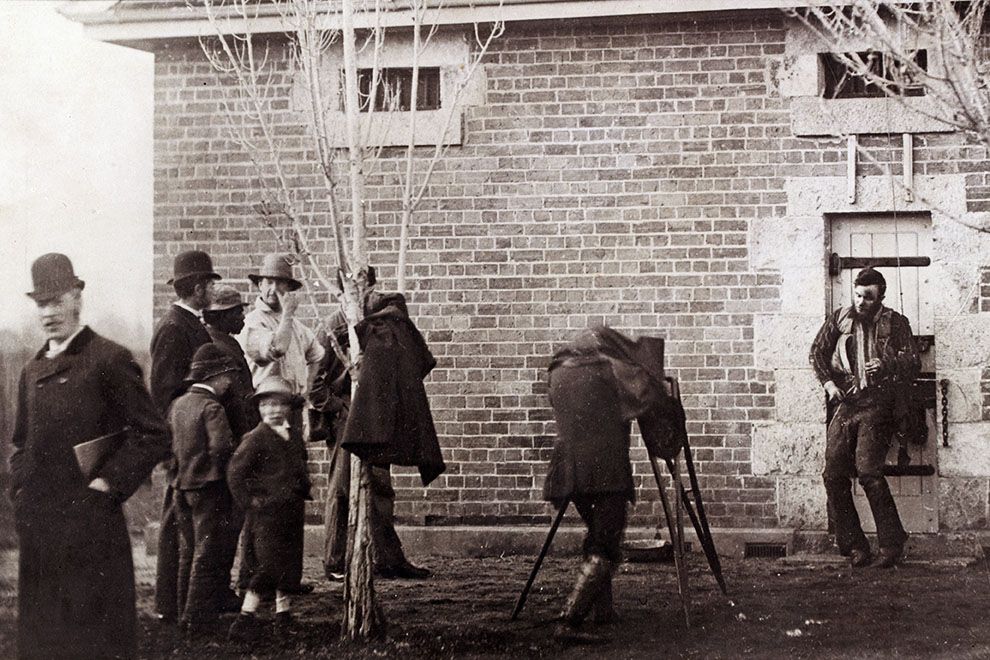 In June 1880, one of the biggest news stories in Australian history broke in the Victorian town of Glenrowan. After years of eluding the police, Ned Kelly and his gang staged a final confrontation at the Glenrowan Inn. Kelly was shot and arrested; the other members of his gang were either shot dead by police or died in the fire that burnt through the hotel after police tried to smoke them out.

Sepia photographs of the bodies and the burnt-out hotel were taken by a mix of studio, amateur and freelance photographers, some of them commissioned by the police. But although the gang’s capture was a momentous story for newspapers, no photographs were included in their dramatic reports. It was still technically too difficult for a newspaper to print a photograph on a newsprint page.

If the police surrounded Kelly and his gang at the Glenrowan Inn in 2016, a mixture of freelance and amateur photographers would again be there taking photographs, just as they did in 1880. Many of the amateurs would be bystanders, armed with mobile phones, who had happened to be nearby when the shooting started. They could photograph the live action instead of just capturing the smouldering ruins of the inn and the aftermath of the siege.

In fact, newspapers – and newspaper websites – in 2016 would report the Kelly gang’s capture using photographs from a wide range of sources, including freelancers, amateurs and photo agencies, as well as stills from television coverage and images of the participants plucked from social media. Given the magnitude of the story, staff photographers would still be sent there as quickly as possible, but in 2016 they would not be the exclusive source of pictures, and there would be fewer of them to send than at any time in the past sixty years.

For most of the time between 1880 and 2016 successful newspapers made vast profits and employed large teams of staff photographers. Those photographers provided a unique and valued product, resulting from technical skill and artistry borne of lengthy training and experience. Not many people could do what they did, and press photographers generally enjoyed significant job security.

As longstanding press photographer Clive Hyde says, “Nobody ever left the Herald and Weekly Times” – his employer for many years – “unless you were carried out.” This meant, as Melbourne Herald Sun photographer Jay Town notes, that there were usually “way more old photographers than… old journalists.” Journalists have tended to be more mobile and move between papers, television and radio, says Barry Baker, who spent forty-two years in the industry, but if a newspaper photographer got a job, they “pretty well stayed there for life.”

The nightmare year for press photography in Australia was 2014. In its third cost-cutting announcement in two years, Fairfax Media announced it would be shedding 75 per cent of its photographers. Thirty positions were lost across Fairfax’s metropolitan papers as it moved to outsource much of its photography to picture agency Getty Images. This left only twelve staff photographers spread between Sydney, Melbourne and Canberra. To put that into perspective, in 1971, just one of Fairfax’s newspapers, the Sydney Morning Herald, had thirty-two graded photographers and six cadets.

Fairfax had been internationally renowned for its well-resourced and award-winning photographic teams. The Media, Entertainment & Arts Alliance labelled the photographic cuts “an assault on the quality journalism that has been the hallmark of the group for more than a century.” Fairfax had already shed 1900 staff in 2012. It was also revealed in 2014 that News Corporation, far more quietly, had shed more than a thousand jobs in 2012, as hundreds of its journalists, photographers and editors were laid off.

A sense of this industrial turmoil, and the vulnerability of photographers, permeates the interviews we conducted for our book, Shooting the Picture: Press Photography in Australia. Several photographers have already faced redundancies or forced retirement, or have moved on from newspapers to work for agencies or as freelancers. One asked, after we’d turned off the tape-recorder, whether we had heard anything more about job cuts at their own organisation. Several lamented the enormous loss of talent within the industry. And some spoke of waiting anxiously for the “tap on the shoulder” to come.

Newspapers’ increasing reliance on agency shots, which can be obtained at lower cost, is not only reducing the number of photographers but is also, according to some of them, affecting the quality and nature of press photography. They point out that Getty’s business is to take the photographs customers will pay for, and argue that agencies are more concerned about the market price of photographs than the art of still photography.

For many photographers, the uncoupling of photographs from that production process signals the decline of press photography because so much is being lost along with that industrial shift, including the team work, training, mentoring, skill-sharing and creativity that came with job security, knowledge and experience.

“I’m hopeful that it will survive. I fear it won’t in the form that we know it,” says the well-known photographer Mike Bowers. “The days of having a huge department where you could get critical mass and ideas and generate unique content are over and dead. It’s gone. We held onto it here in Australia for a lot longer than we did overseas. But it’s dead and gone.”

Longstanding Age photographer Penny Stephens observes that “Australia is one of the few countries that still has staff photographers, so we’re kind of lucky that we still have staff jobs.” But she understands that it’s “not going to go on forever”: “It wouldn’t surprise me if they went the same way as the papers are going overseas and just hiring freelancers when they need somebody.” Another photographer observes that in London they “put out a word that they need a shot of something… and a whole stack of people turn up and whoever gets the shot that gets published gets paid… Frightening.”

One photographer predicts that “there’ll be a little bit of room” for photographers at Australian newspapers. But another refers to rumours of further cuts to photographic staff at newspapers in 2016, and to the use of freelancers by new players such as Huffington Post and the Daily Mail in Australia, ominously declaring that “the days of staff photographers [are] pretty much over.” Our book has been an attempt to bring some of those photographers, their stories and their work out from behind the lens, and to reflect on the past, present and future of their profession. •

This is an edited extract from Shooting the Picture: Press Photography in Australia, by Fay Anderson and Sally Young (Melbourne University Publishing).

Sally Young is a reader in political science and an Australian Research Council Future Fellow for 2014–17, and has published extensively in the areas of Australian politics, Australian media, political communication and journalism studies. Fay Anderson lectures in the School of Media, Film and Journalism at Monash University, and has published widely on media history, war journalism, genocide, photography and violence.