Sick of all my kicks

Books | Should we embrace boredom? 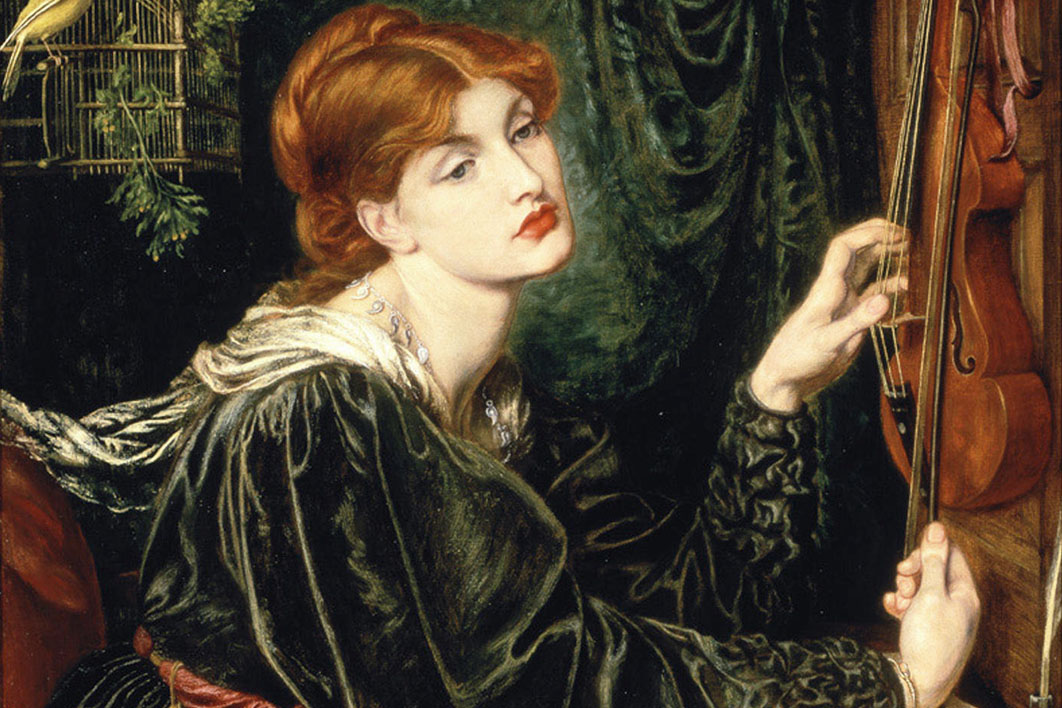 “It is good, on occasion, to be understimulated by the world”: detail from Dante Gabriel Rossetti’s Veronica Veronese (1872). Historical Images/Alamy

Out of My Skull: The Psychology of Boredom
By James Danckert and John D. Eastwood | Harvard University Press | $69.99 | 288 pages

All over the world, people in lockdown are living in a stew of stale air and uncomfortable emotions. There is worry and a sense of threat about what may come to pass and irritation at the no longer cute foibles of cohabitants. There is sadness and grief over the loss of loved ones and possible futures. There is loneliness and longing. And perhaps most of all, at least for the lucky ones, there is boredom, the sullen tedium of being stuck in unchanging space and dragging time.

At first blush boredom might look to be a simple emotion, merely the mind’s response to an unstimulating environment, something that might trouble an embowled goldfish as much as a quarantined human. Not so, say the authors of this fascinating book. Boredom is as psychologically rich as the minds of those who experience it, and it isn’t even an emotion but a “feeling of thinking.” Academic psychologists James Danckert and John Eastwood have written an extended meditation on boredom as feeling and motive, as source of misery and meaning in life, as social pathology and technological predicament.

Danckert and Eastwood aren’t the first to turn their scholarly attention to boredom. Several bewhiskered German and Scandinavian philosophers have also pondered its dull ache. Arthur Schopenhauer declared it one of the two enemies of happiness, Søren Kierkegaard identified it as the root of all evil, Martin Heidegger distinguishing between its superficial and profound variants, and Friedrich Nietzsche speculated on God’s boredom on the seventh day of creation.

Psychoanalysts have weighed in, too, viewing boredom as a way of avoiding desires the person would rather not recognise. As Adam Phillips, epigram-loving author of the memorably titled On Kissing, Tickling and Being Bored put it, boredom is “the mood of diffuse restlessness which contains that most absurd and paradoxical wish, the wish for a desire.” In analyses such as these, boredom emerges as complex, conflicted and existential, not merely a reaction to imposed monotony.

So what then is boredom? One of the strengths of this book is that rather than plod didactically through a series of experiments or a simple explanatory scheme, the authors try to capture the subjective feel of boredom in an unreductive fashion. One part of that attempt is a careful dissection of the differences between boredom and other experiences that often travel with it, such as frustration, loneliness and sadness. Another is a deliberate attempt to distinguish what boredom is, in itself, from its causes and effects.

Although Danckert and Eastwood paint a nuanced picture, they resist the easy option of proposing that there is not one boredom but many. Boredom is singular, but it is a conglomerate of thoughts, feelings and wishes and has no single opposite to give it meaning. Sadness may be happiness’s opposite pole, but boredom’s many contrasts include curiosity, interest, relaxation and the sense of flow.

To the extent Danckert and Eastwood develop their own account of boredom, it has two mutually reinforcing elements: a “desire conundrum” and “underutilised cognitive potential.” The former refers to a sense of directionless “wanting to do something but not wanting to do anything,” when we are unable to summon a desire to do any of the things currently available to us. The latter involves the pain of not having our mental capacities optimally engaged, either because the environment is unchallenging or because it is too challenging.

This formulation captures how boredom doesn’t reside in the external reality of our world but in its lack of fit with our mental resources and aptitudes. This is not to say that the state of that world is irrelevant, of course. Monotony and situations that thwart or constrain us promote boredom, but so too do personality traits such as extraversion that make some of us more boredom-prone than others. What bores us is highly individualised, the photographic negative of the idiosyncratic pattern of things that fascinate us.

Out of My Skull clearly demonstrates that boredom has consequences. Research shows that it drives some people to over-eating, substance abuse, self-harm and other forms of impulsive behaviour. It is associated with depression and may be one of its early warning signs. People prone to boredom are especially likely to explode in anger and to engage in delinquency, with psychopaths and narcissists two cases in point. People living in extreme conditions that foster boredom — on polar research vessels, for instance, or in solitary confinement — often suffer severe psychological impacts.

According to the authors, the sense of meaninglessness and disconnection so central to boredom also drives destructive forms of engagement with technology. Although they are sceptical of claims that our societies are experiencing an epidemic of boredom, and they are not issuing yet another denunciation of the evils of social media or excessive screen time, Danckert and Eastwood argue that our devices often encourage and reward quick and easy escapes from boredom. Consuming this “junk food for the mind” is self-defeating as a response to boredom because it is ultimately unengaging and renders us passive. There is a reason why we tend to be least bored when engaged in face-to-face interaction with others.

Although Out of My Skull devotes space to the more negative implications of boredom, it also acknowledges its positive possibilities. Boredom, as Adam Phillips wrote, is a state “in which hope is being secretly negotiated.” Danckert and Eastwood suggest it is a signal notifying us that we are disengaged and prompting us to act. It motivates change and protects us from apathy, especially if we can avoid escapist responses that short-circuit rather than overcome it. In the end, being bored orients us to our agency and our need for life meaning, teaching us that we need a larger life project or perhaps that we gave one up too soon. In one of its many arresting aperçus, the book claims that “to be bored is to fail to be the author of our own lives.” Boredom tells us to pick ourselves up and write something.

Out of My Skull is an enjoyable and enlightening read that explores the many dimensions of boredom deftly but deeply. As notable researchers themselves, Danckert and Eastwood weave in selected research findings while giving at least equal time to philosophy, literature and educated introspection. The book is not an advice manual but offers a great deal of useful leads for those seeking guidance on matters such as why it is pointless to give a bored and whiny child a list of things to do, or why the teenage years are the apex of ennui.

What might this book have to offer to those of us who have succumbed to cabin fever while trying to avoid catching something worse? The authors recognise that isolation and boredom are “unhappy bedfellows,” two forms of disconnection that can have compounding effects. Even so, boredom offers up some opportunities. Out of My Skull tells us not to fear boredom or attempt to avoid or outrun it, but to embrace it instead. The capacity to be bored is an important achievement in our personal development and it spurs us to build self-reliance and find new projects and purposes: “it is good, on occasion,” say the authors, “to be understimulated by the world.”

Many of us don’t have much choice in the matter right now, but this engaging book offers wisdom and perspective on our predicament, both temporary and permanent. •

Sending a message to the wrong people

War footing: then prime minister Tony Abbott in Darwin in October 2013 launching the first of eight Cape-class vessels that would take a lead role in his government’s Operation Sovereign Borders. Peter Eve/AAP Image 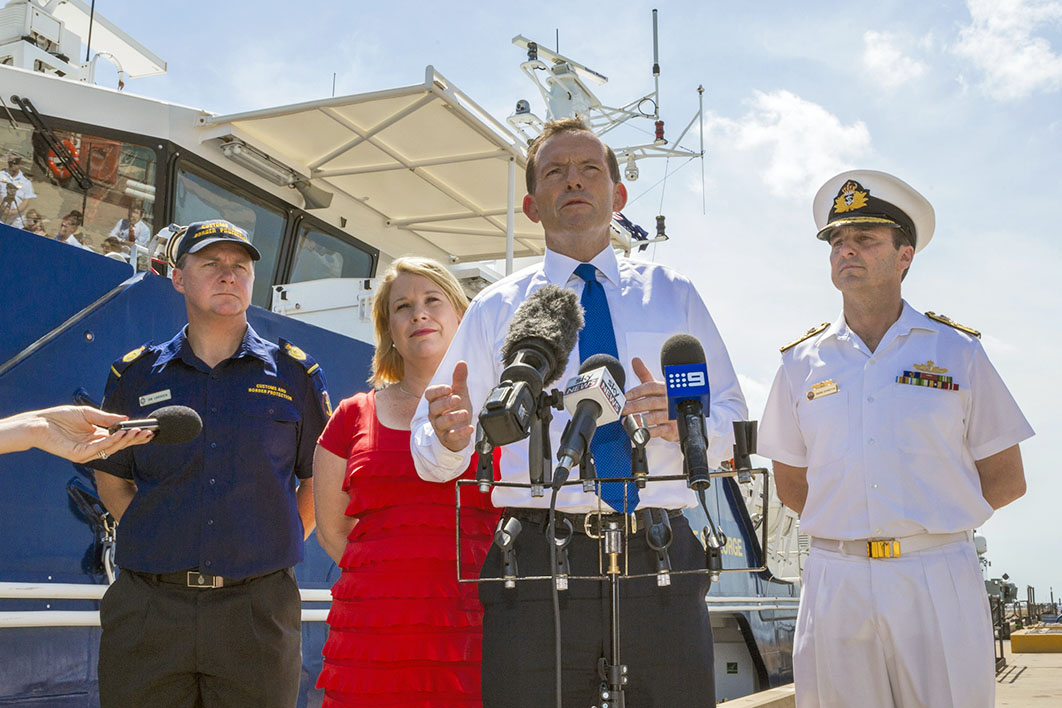 War footing: then prime minister Tony Abbott in Darwin in October 2013 launching the first of eight Cape-class vessels that would take a lead role in his government’s Operation Sovereign Borders. Peter Eve/AAP Image