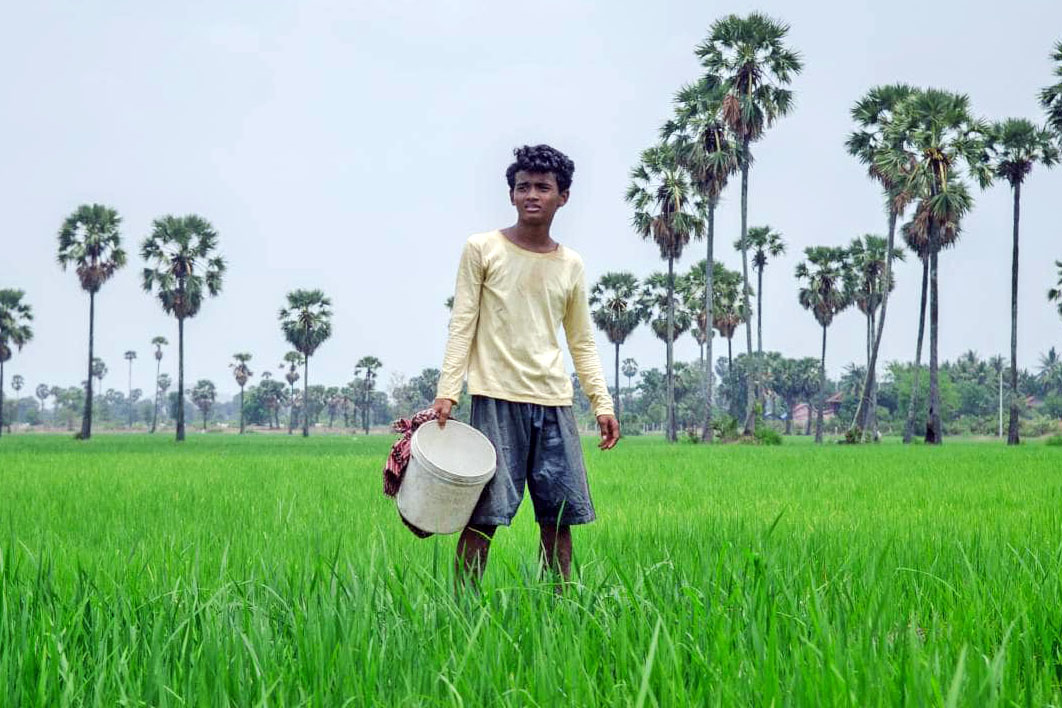 Buoyancy is a surprise. Out of seemingly forbidding material, new-generation Australian filmmaker Rodd Rathjen has crafted a gripping thriller. This is a tale of modern slavery, most of it set on a Thai fishing boat, yet alongside the desperation there are moments of beauty and even hope.

Chakra (Sarm Heng) is a fourteen-year-old Cambodian boy from a large family who works in his uncle’s rice fields. He would like to earn money of his own. He would like to court a girl he knows from the village. He would like to know the world beyond this round of endless labour. Maybe work in a factory in the city? He’s heard of others who have done this. From the rice paddy he watches the buses speed by, and one day he is on one of them.

The way Chakra is taken across the border, tricked and trafficked, is predictable enough to be ominous, and he isn’t stupid. But after that first hopeful yet anxious bus ride, his choices diminish at every stage of the journey. He is among other slaves and there is no escape because there is nowhere to escape to.

Writer–director Rodd Rathjen is a VCA graduate whose 2013 short film, Tau Seru, made it to Cannes. It too told of a boy — this one herding in the Himalayas — who watches buses go by and wants to find his way to a wider world.

Along a journey that becomes ever more dislocating, Chakra bonds with an older man, Kea (Mony Ros), a fellow Khmer who has set out to earn money for his family. They catch only the barest glimpses of Bangkok, through their bus window. Not till they are at sea do they learn that this sea, this old fishing boat, is their destination.

Rathjen has shot the film with actors speaking both Khmer and Thai. Few of them were professionals. Sarm Heng was found through the Green Gecko project, which helps educate former street kids in Siem Reap in Cambodia. As Chakra, he has an attentive stillness; he will need to know every detail of the boat and the habits of its captain in order to survive.

Thai actor Thanawut Kasro, who has played a number of genre roles in Thai films, takes to his role as the captain, Rom Ran, with such ferocity I was startled. But the menace plays well against the silent wariness of Heng’s Chakra and the other shocked workers. Rom Ran’s task is to keep bringing in the cargo. He and his two henchmen must keep these frightened workers, many of whom don’t speak Thai, working as many as twenty hours a day before they crawl below for a few hours’ sleep. They haul load after load of small fish and scrapings — so-called trash fish — from the sea bottom, to be used in the pet food sold to us here.

The brutality is shown matter-of-factly, without relish. Rathjen’s gift is simplicity: there is such clarity in his storytelling that I was with Chakra almost every step of the way. There are also, thankfully, quiet passages, green, soft and soothing, when the boy can slip over the side into the water.

When Australian feature filmmakers look to Asia or the Pacific for their stories, they have often wanted films with “bankable” stars — American, Australian or British, and usually white.

At least Lion had Dev Patel in the lead, with Nicole Kidman as his Australian mother, in a wig seemingly from the wardrobe of Shaun Micallef’s Mad as Hell. Yes, Holy Smoke was a satire. And in The Waiting City the couple found an Indian orphanage and decided they wouldn’t adopt. But look, can’t we move on from this Westerner-encounters-the-exotic-East stuff?

Alongside these big films, more modest Australian features have tried to tell Asia-Pacific stories from within Asian or Pacific cultures. Benjamin Gilmour’s Son of a Lion (2007), for example, was set in one of the Pashtun administrative provinces of Pakistan, where guns are reverse-engineered by villagers to arm the warlords. Martin Butler and Bentley Dean’s Oscar-nominated Tanna (2015) laid a Romeo and Juliet story over the top of conflict between two tribal groups, one resisting the changes brought by encroaching Western culture, another embracing them.

Buoyancy takes another leap, laying bare the workings of a particular form of gangster capitalism serving a global industry. Rathjen doesn’t lecture, he simply shows a system in operation, and what one smart, mostly silent boy learns in order to survive.

Rathjen began researching this film in 2015 after journalists with Associated Press exposed the plight of slaves held in an Indonesian island village called Benjina. There were hundreds of them, some in cages and some who had escaped into the jungle. It had been many years since they had been home. Some were from Cambodia; others were Rohingya from Myanmar or rural Thailand. Rathjen was able to interview some of them, and their stories helped shape this film.

Benjina was not the only “slave” village so very close to Australia. Laws, regulations, inspections and tighter policing alone will not abolish this appalling trade. Australia last year passed modern slavery legislation that requires businesses with an annual turnover of a million dollars or more to specify their supply chains. But in international waters, beyond the scope of officialdom, a process called “transhipment” — transferring the catch into “clean” vessels to take to port while the slave ships stay out at sea — can help the slavers avoid scrutiny. Or else slaves may be dumped on remote atolls when word spreads about a crackdown. Anti-slavery campaigners are adamant that consumer action is needed too. They want us to ask persistent questions about the pet food and fish product companies we use.

What makes his film so oddly appealing are the memorable images, the clarity of story and the way all the elements — performance, image and sound — work together. The cinematographer is the inventive Michael Latham (Casting JonBenet, Island of the Hungry Ghosts), whose work is striking. Sound, too, is used very effectively, at times amplifying the claustrophobia the exhausted men feel as they crawl below to try to snatch some sleep. Sam Petty (Sherpa, Animal Kingdom, The Boys) is the seasoned sound designer, and I should declare an interest here: I’m his mum.

Buoyancy is Australia’s nominee for best international feature film at the 2020 Academy Awards.

The Colombian filmmakers Ciro Guerra and Cristina Gallego had a hit in 2015 with Embrace of the Serpent, a film examining the impact of two explorers, in different times, on the indigenous people of the Colombian Amazon. It was gorgeously shot in black and white and the tragedies it found upriver were evoked with forceful simplicity.

Birds of Passage (screening from 3 October) is a more ambitious film on a comparable theme. It tells the story of how the drug trade enriched, corrupted and eventually destroyed a clan from one indigenous group: the Wayuu, who live between the desert, the jungle and the sea on the Guajira Peninsula in Northern Columbia. In five chapters across the sixties and seventies, the film is shaped as an epic. It is also a fascinating portrait of a matriarchal society.

Carmiña Martínez plays Úrsula, the matriarch of one of the Wayuu clans, and Natalia Reyes her daughter Zaida. José Acosta is Rapayet, who comes seeking Zaida’s hand. When Úrsula, hoping to deter him, sets a bride price apparently beyond his reach, he and his lowland friend Moisés seize an opportunity to raise it, selling marijuana to American peace corps volunteers. They soon find themselves in a very profitable business. But Moisés, from the lowlands, is considered dangerous by the Wayuu, who call him Alijuna, the one who does damage.

The film draws heavily on Wayuu rituals: ways of upholding honour and of organising births, deaths and debts; ways of managing conflict between families. As Rathjen did with Buoyancy, Guerra and Gallego have consulted indigenous people and cast some in supporting roles or as extras. The lead actors are professional, though some have connections to the culture, and they speak both Wayuu and Spanish. The performances — especially those of Acosta and José Vicente Cote as Peregrino — are very strong.

With all this, I found it hard to sustain belief. One reason may be visual: Guerra and Gallego have built two of the three main sets — a traditional Wayuu dwelling and compound, and a dazzling white hacienda — standing alone on hard-baked desert soil. The abstraction is intentional, and maybe this decision also solved problems of location and permission. It’s certainly arresting.

But from the opening dance onwards, the theatricality of actors performing various Wayuu rituals and greetings in these settings was unsettling. At times the tragedy gripped — it’s an extremely powerful story — but by the time a pair of white bird legs began appearing in dreams, I stopped believing. It’s an image I’ve seen before, in Asian cinema, signifying ghosts.

This really did feel like cultural tourism, or ersatz anthropology with a dash of magic realism thrown in. Beware those all-white dream sequences, I say. They might have worked for Kubrick in 2001: A Space Odyssey, but now, like galloping white horses and giant bird legs, they signal danger: magic realism ahead. •

Julie Rigg is a film critic and former broadcaster with ABC Radio National. She is currently on the selection panel for the Asia Pacific Screen Awards.