Listening closely: Cass Sunstein talks to Barack Obama and his senior adviser Valerie Jarrett at the White House during his period heading the Office of Information and Regulatory Affairs, 7 April 2011. Pete Souza/White House 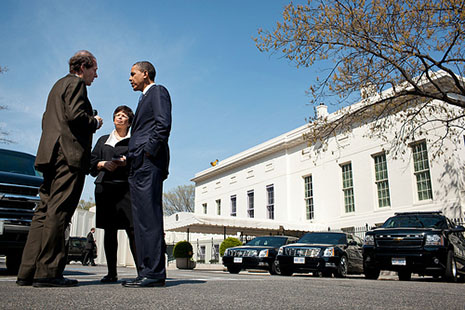 Listening closely: Cass Sunstein talks to Barack Obama and his senior adviser Valerie Jarrett at the White House during his period heading the Office of Information and Regulatory Affairs, 7 April 2011. Pete Souza/White House

ARE you a free marketeer or a red-tape nanny statist? Do you trust the ability of individuals to make their own decisions or do you think that government always knows best? If you have always found questions like these about whether you are on the “side” of markets or the “side” of government tedious or unhelpful, then you should read Cass R. Sunstein’s Simpler.

Regardless of whether your interests are those of a policy-maker trying to develop implementable solutions, an academic grappling with the role of the state in the twenty-first century, or a citizen who is perplexed by the fact that governments can be so good at some things and so bad at others, there is something in this book for you.

Simpler is one of those books where the messenger is as important as the message. Cass R. Sunstein has played a central role in the emergence of behavioural economics as one of the most transformative schools of thought in economics in recent decades. He is probably best-known for the book Nudge, which he wrote with Richard H. Thaler. But the strength of this new book comes from the insights gained in his more recent role as the head of the Obama administration’s Office of Information and Regulatory Affairs, or OIRA.

OIRA plays a powerful coordination role in the US legislative process. Put simply, it can prevent the introduction of new regulations and even, in Sunstein’s words, “say no to a member of the president’s cabinet.” Inevitably, Sunstein was dubbed Obama’s “regulatory czar.”

Sunstein describes in clear language and with diverse examples how he applied the lessons he learned researching how humans really make decisions (as opposed to how economists typically assume they do) to the task of streamlining and improving both proposed regulations and existing ones.

The title of the book gives away Sunstein’s main objective: to simplify rather than reduce the role of government in people’s lives. Rather than accept the premise of the questions posed in the first paragraph of this review, Sunstein set out to simplify regulations, reduce the time and money spent collecting and collating information, shorten the lengthy and complex forms that government agencies typically rely on and, most of all, try to ensure that all government regulations were assessed using the principles of cost–benefit analysis.

Sunstein summarises the recognition given to economists interested in behavioural economics in recent years, including Nobel Prize winners such as George Akerlof (2001), Daniel Kahneman (2002), Thomas Schelling (2005) and Peter Diamond (2010). He even plots the changing trajectory of an orthodox economist like Ronald Coase who, at 101 years of age, is editing a new journal about human behaviour.

There is little sign that these organisations accept that people can be “nudged” into making better decisions through well-designed prompts and default settings; that decisions can be framed in ways that help individuals contextualise their decisions; that “choice overload” can be avoided by limiting the range of options initially presented to people; or that “choice architecture” can be designed to ensure that not just the decision, but the decision-maker, is located in the right context when making important decisions.

While Australia leads the way in the use of default options to lead people towards better decision-making in some specific policy areas, it is clear from reading this book that government agencies in some other countries are shifting far more quickly away from an implicit reliance on that ultra-rational but imaginary species, homo economicus, when designing policy.

For example, Australia introduced compulsory superannuation in part because we believed that individuals left to their own devices would not make adequate provisions for their retirement. We recently introduced “default” superannuation products under the MySuper reforms because we believed that individuals could not be trusted to search for low-fee superannuation products that suit their needs. But at the same time we refuse to force banks to clearly display their ATM fees before people have got 90 per cent of the way through their transaction.

Sunstein provides a clear analysis of the way that industry groups try to push regulators around. He also provides powerful examples of how small changes in what governments do can make big differences in society. He describes, for example, how replacing the “food pyramid” with the “food plate” led to much greater understanding of what constitutes healthier eating; how simplifying government forms for financial support led to half a billion dollars’ worth of administrative savings while increasing the uptake of government programs; how new regulations forced banks to disclose far more information, far more clearly, to ensure that their customers “know before they owe”; and how citizens can elect to import data already held about them by the tax department into other government forms to save time and reduce the chance of making mistakes.

Most usefully, Simpler presents an optimistic vision that should appeal to those who think government can be a force for good as well as those who know it is a force for evil. Regardless of your philosophical baggage, if you are interested in the efficient provision of services, be they public or private, there are important lessons in this book.

Similarly, the book offers valuable insights both for those who have already been exposed to Sunstein’s earlier work, or to that of Daniel Kahneman (most recently in his book Thinking, Fast and Slow), and for those who are new to behavioural economics. Sunstein achieves this breadth by drawing on his time as an academic and as a practitioner.

While the book provides a good return on investment for readers with an interest in the role of government or the reform of government, it does have a few limitations, though these flow directly from its strengths. Sunstein’s time running OIRA, for example, provides a unique perspective but also means that the book neglects a wide range of international examples. If behavioural economics can take off in America, though, it is hard to imagine that the Australian policy-makers who have been so ambivalent about its lessons will be able to hold out indefinitely against the rising tide of evidence supporting its benefits.

Another limitation relates to the optimism with which Sunstein implies that, with time, cost–benefit analysis will become sufficiently refined to allow the meaningful integration of benefits as complex as human dignity. That said, Sunstein makes the point that the mere process of forcing regulatory agencies to undertake cost–benefit analysis can be enough to get them to stop and think about the available options rather than simply “running with the herd.”

Sunstein concludes with a plea, one this reviewer agrees with wholeheartedly. “Rules are not improved by sloganeering, fact-free letter writing campaigns or special pleading from interest groups...” he writes. “Crucial information often comes from people in the private sphere, which has unique access to that information... [T]hose who have the privilege of serving the American public should listen closely to those whom they are privileged to serve.” •

Richard Denniss is Executive Director of The Australia Institute, a Canberra-based think tank.

Books & Arts When the market is the policy, housing fails Peter Mares 25 May 2020 Books | Three housing researchers plot the way out of Australia’s affordability crisis
Close

Juries are confused, but Australian courts don’t seem interested in understanding why

A world without certainty: Henry Fonda (second from left, above) in the jury room in Sydney Lumet’s Twelve Angry Men. 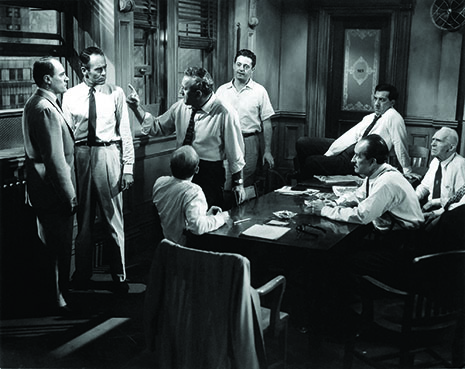 A world without certainty: Henry Fonda (second from left, above) in the jury room in Sydney Lumet’s Twelve Angry Men.