In breaching a key principle of the vice-regal relationship, John Kerr created the conditions for a crisis 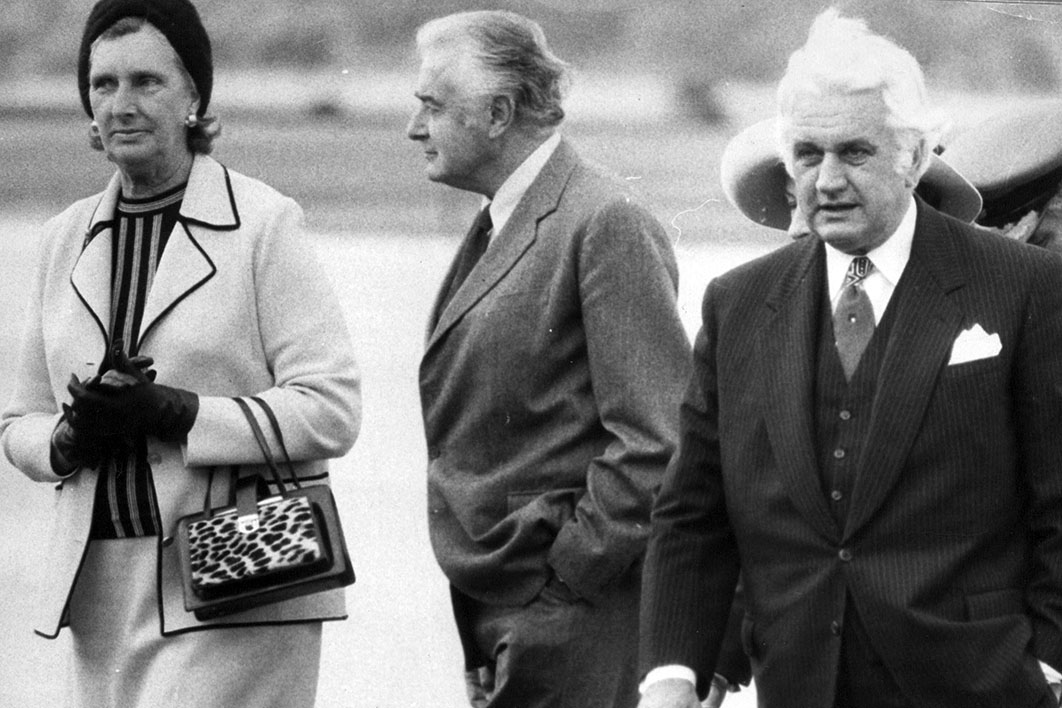 I approached the Palace Letters seeking (among other things) evidence on two connected points. The first was confirmation of Jenny Hocking’s revelation that Sir John Kerr claimed that the Palace had indicated it could “try to delay things” if prime minister Gough Whitlam attempted to dismiss Kerr, conceivably to allow the governor-general time to strike first. And the second was evidence of whether, on the other hand, the Palace ever encouraged Kerr to establish an open and frank relationship with Whitlam in which the governor-general made clear how he viewed the constitutional crisis and his possible role?

On the first question, the evidence was easily found. In a letter of 2 October 1975 (two weeks before the deferral of the Senate’s vote on the budget was announced), the Queen’s principal private secretary, Martin Charteris, wrote that the Queen “would take most unkindly” to any advice from Whitlam to dismiss Kerr. “There would be considerable comings and goings,” he added, “but I think it is right that I should make the point that at the end of the road The Queen, as a Constitutional Sovereign, would have no option but to follow the advice of her Prime Minister.”

Only the most obtuse of governors-general could fail to interpret this as a favourable sign; the Palace seems encouraging rather than neutral (as was also evident throughout in the amiable intimacy of the exchanges). The references to “comings and goings” and “at the end of the road” speak volumes: any such recommendation from Whitlam would only be implemented after some delay. Put simply, Kerr now knew that it would be easier for him to dismiss Whitlam than for Whitlam to have him dismissed. (Clearly, Kerr did not take the view that “follow the advice of [the] prime minister” applied to him.)

Given this revelation, part of Kerr’s justification for not dealing frankly with his prime minister — fear of dismissal and the consequent embroilment of the monarchy in Australian domestic politics — is on shaky ground. In any event, it is unclear why the preservation of the monarchy’s interests and reputation should have been Kerr’s greatest concern in a constitutional conflict where more contemporary democratic principles might have warranted a higher priority.

Kerr’s reports to the Queen are consistent with his later claims that Whitlam was so immovable that it was pointless to discuss options with him. This is a cop-out for the person in Kerr’s position, a former NSW chief justice and judge of the Commonwealth Industrial Court who should have been acutely aware that fixed positions often give way in changed circumstances (otherwise no strike would ever end). It is even more indefensible for a man who had secured a 50 per cent increase in the governor-general’s salary and a ten-year (rather than five-year) term as conditions for taking the role. Highly paid jobs occasionally come with heavy lifting.

My second quest — to discover whether the Palace encouraged Kerr to be candid with Whitlam — concerned more than simply a matter of good manners. In English constitutional theory, openness and candour are core principles of the relationship between the monarch (or, in this case, her representative) and her chief minister. The renowned constitutional authority Walter Bagehot summarised the monarch’s three rights as “the right to be consulted, the right to encourage and the right to warn.” Kerr appears to have done little to insist that Whitlam observed the first, the evidence on the second is less clear and he clearly scored a Fail on the third.

It’s true that any encouragement from the Palace for Kerr to be candid may well have constituted “interference” in Australian politics, although surely no more so than (non-lawyer) Charteris’s written response to Kerr on the existence of the reserve powers (with supporting academic literature) and on the powers of the Senate in respect of money bills.

Of course, concern about Kerr’s lack of openness with his prime minister is far from the preserve of supporters of Whitlam. The list of critics on this point includes the man Jenny Hocking revealed to have been his close adviser, future High Court chief justice Anthony Mason, the governors of Victoria and New South Wales, and Kerr’s immediate predecessor, Sir Paul Hasluck.

Hasluck, who had been a senior Liberal minister in the Menzies, Holt and Gorton governments, is the most interesting of these critics because he later contemplated how he might have dealt with the crisis. In a 1972 lecture he had stressed that the governor-general has only one set of advisers — those ministers who are supported by a majority in the lower house. Although he could not have anticipated the events of 1975, that view contrasts with the notion of the governor-general as an umpire or referee, which was held by many of Kerr’s supporters.

The emphasis on a frank and open relationship between governor-general and prime minister features prominently in Hasluck’s lecture and in notes attached to the published version. While those observations predate the dismissal, Hasluck later commented on Kerr’s actions in a series of recorded discussions with former Whitlam government minister Clyde Cameron in 1985 and 1986. Hasluck advised Cameron that constitutional power was less the issue than “whether the conventions of discussions between prime minister and governor-general were observed.” He contended that the traditional role of warning, advising and cautioning the prime minister should precede any constitutional action. Hasluck had read his Bagehot.

In meetings during the crisis, opposition leader Malcolm Fraser had threatened Kerr with public condemnation if Whitlam were not dismissed. Hasluck observed to Cameron that had he been governor-general, he was not sure that he would have had any conversations at all with Fraser, given that the governor-general has only one adviser at any point in time (clearly the prime minister). Any interview that did happen, he said, would have been cut short after such a threat.

Despite Kerr’s views, Hasluck didn’t think that Whitlam was looking for a subservient governor-general; that had not been the nature of his own relationship with Whitlam, who would have given Hasluck a further term if Hasluck’s wife’s ill-health had not made an extension impossible.

On the specifics of the crisis, Hasluck claimed that had he been in office in 1975, “at a much earlier stage there would have been discussions between Whitlam and myself, and some indications to Whitlam that certain matters needed reconsideration.” In his final comments on the matter, Hasluck asserted that “If I had stayed, only for two years, the history of Australian politics would be quite different from what it is.” This uncharacteristically immodest claim is endorsed by Charteris’s Palace colleague (and subsequent successor) Sir William Heseltine, who observed that “Whitlam and Hasluck would have had a relationship which would have precluded the turn of events which took place.” He also suggested that the Palace “view” was that Kerr should have waited several more days before acting.

Whitlam and Hasluck shared the mutual respect of former political opponents, and that background undoubtedly contributed to Hasluck’s understanding of the demands of political leadership and capacity to offer sage advice. Whitlam is said to have regarded Kerr, by contrast, as more of a political dilettante, flirting with the thought of electoral politics but always opting for appointed office as the less onerous path to power.

Even if Kerr’s claim that he was saving the Queen from becoming embroiled in Australian politics is taken at face value, he could have achieved the same end by seeking to minimise contact with the Palace for the duration of the crisis — thus ensuring that it remained an in-house Australian conflict — rather than unleashing a voluminous correspondence that smacks of colonial reporting to head office. This was not a man seeking to spare the Palace from perception of political involvement so much as one confident that the details of such involvement would be hidden from public knowledge for a long, long time. That the Palace could have minimised its exposure (“It’s over to you, Sir John, you’re an independent nation. Let us know how it works out.”) doesn’t appear to have occurred to anyone at the London end.

And what of Kerr’s alleged concern about the potential constitutional nightmare of competing dismissals (his or Whitlam’s)? This could have been dealt with quite easily. It was open to the governor-general to advise Whitlam at their meeting on 11 November that he was holding two letters, one of dismissal and one (awaiting Whitlam’s signature) advising a general election. If the second was signed, the first would be redundant. This would have precluded any melodramatic “rush to the Palace” by Whitlam — a scenario regarded as unlikely by several players of the time, incidentally, including some of Whitlam’s opponents. It would also have allowed Whitlam to contest the election as prime minister, mitigating some of the damage caused by the (enduring) perception that Kerr acted in a partisan fashion.

Even if the Kerr–Palace relationship had proceeded along impeccably appropriate lines, though, it is still possible that the ending may have been the same. The encouragement of the Palace was not a necessary precondition for the actions Kerr ultimately took, except perhaps in some psychological sense — a field beyond the expertise of this writer.

Positions are too firmly held for the Palace Letters to change many minds about the events of 1975: a consensus about the appropriate monarch–governor-general relationship and what constitutes “interference” is too elusive. For some on the left, the letters provide evidence of the ruling class looking after its own. Gough Whitlam’s oft-stated faith in royal neutrality certainly seems to have been misplaced, and that proud Australian would have been less than impressed by the fawning tone of much of Kerr’s correspondence. More than ever, he would have regretted that Hasluck had been unable to serve a second term. On that point, many would have agreed with him. •