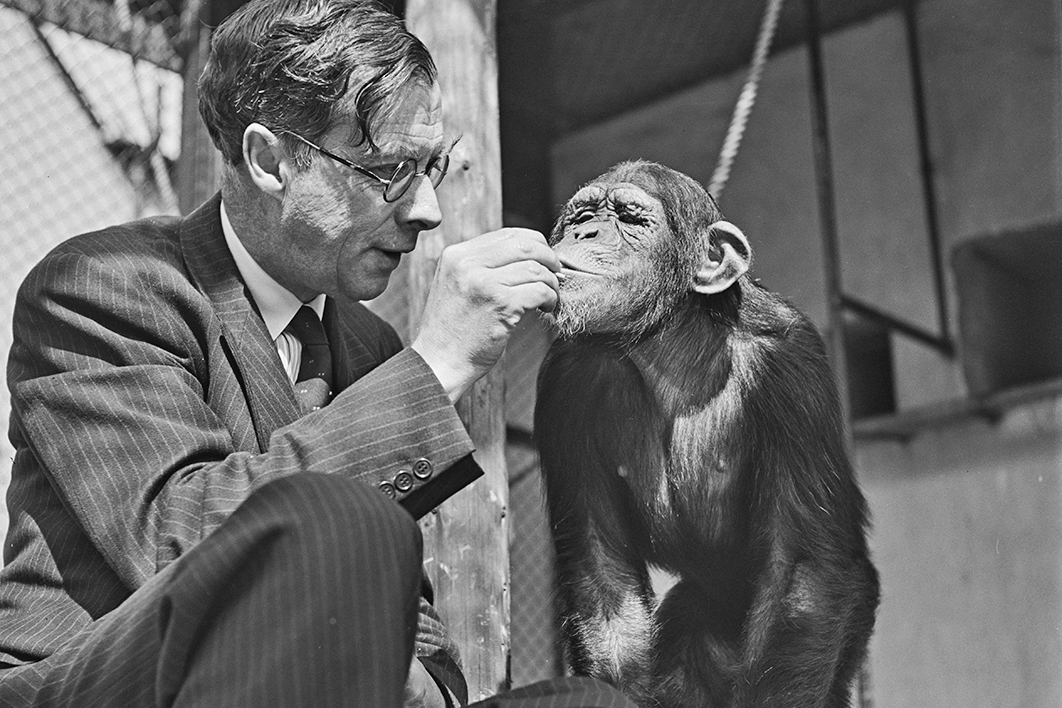 There is a poignant paragraph in the epilogue to Alison Bashford’s monumental, cross-generational account of the lives and cultural influence of Thomas Henry Huxley and his grandson Julian Sorell Huxley. Bashford acknowledges a debt to Houston’s Rice University Archives, where “Julian’s books are now sequestered.” It is a rueful acknowledgement, but also a clue to the spur for Bashford’s labours.

Julian’s personal library is a little lifeless now, ignored by most, treasured by a few. In a thousand ways, this Intimate History of Evolution is an effort to interpret that library’s meaning, an intellectual ecosystem of the modern natural and human sciences.

Julian’s “personal library” was bestowed on him by his grandfather, a titan of nineteenth-century zoology and comparative anatomy, and a competitive, combative self-made scientist who revelled in his title “Darwin’s bulldog.” Julian (1887–1975) overlapped Thomas Henry (1825–1895) by eight years. His inheritance, of which the library is a symbol, was rich, strange, complex and multivalent — “an intellectual ecosystem” indeed.

Alison Bashford is a distinguished Australian historian whose global perspective and research experience — in science, naval, medical, environmental and population history — equip her well to explore and elucidate that “ecosystem.” Her Intimate History is scrupulously researched and broad in scope, taking in three generations of the talented Huxley dynasty.

A formidable undertaking, yes, but also lucid, lively and addictive — a book for that creature beloved of publishers, the avid general reader. Its weighty scholarly apparatus does not interfere with the narrative flow; the generous visual component of the book is not merely illustrative but rather an integrated and striking adjunct to which Bashford often has recourse. She enjoys picturing and analysing her “primate” subjects through their milieux. (In one shot, for example, those “fraternal primates,” Julian and Aldous Huxley, are fondling “a young relative” — a chimpanzee? — in the San Diego Zoo.) Some of the book’s photographs are unforgettable, most notably the contrasting images of Julian’s “adored” Guy, the lowland gorilla, “caught” hauntingly by Wolfgang Suschitzky in the London Zoo in 1958, and confrontingly as a “latex-stretched” specimen in his glass case in London’s Natural History Museum.

Hovering over all of An Intimate History is the towering figure of Charles Darwin. The Huxley name has not, like Darwin’s, gone into the language as an adjectival football to be kicked around for all manner of purposes even 140 years after his death. (If much of America’s media culture had not descended into fatuity, one might expect to hear it traduced, still, on Fox News.)

But Bashford is interested not in a hierarchy of “great men” but in context, fortuitous combinations, and pivotal moments in history:

The explosive idea of evolution by natural selection was as suited to Huxley’s character as it was a paralysing ill match for Charles Darwin. Together, and with a close circle of like-minded friends, they drove a new scientific naturalism in the middle of the nineteenth century, contesting any explanation of nature, old or new, that relied on a beyond-natural or supernatural force or origin.

The double act — Charles Darwin + T.H. Huxley — brings to mind another forceful duo, Martin Luther and Lucas Cranach. Luther was not, like Darwin, shy of confrontation, but he needed the skilled woodcutting hand of Cranach to illustrate and make accessible the complexity of his Reformation proclamations and turn his German translation of the Bible into the age’s equivalent of a bestseller.

Thomas Henry was, of course, so much more than a carnival barker to Darwin, as Bashford makes clear. If he had to found an intellectual lineage through his own labours rather than inherit one, he did so rapidly and successfully, in fertile partnership (eight children) with Henrietta Heathorn, whom he met and fell in love with in Sydney during a stop on his only field exploration voyage, on the Royal Navy’s wonderfully named HMS Rattlesnake. Darwin on HMS Beagle, Huxley on HMS Rattlesnake: Bashford must have smiled to see some of her work mapped out for her!

Huxley was commissioned as a surgeon, not a naturalist, for his Rattlesnake voyage, but he nonetheless used his Pacific time (the voyage took years) to dissect, study and record some of its creatures, notably the jellyfish. Bashford has fun with lovesick Huxley and his jellyfish:

Thomas Henry was subject to “a painful and unbalanced mental state,” “lethargy,” “self-questioning,” and “depression”… When he felt discontented, he said he reached for Carlyle, and tried to discipline himself by scheduling thoughts-of-Henrietta into his daily routine. One hour before bedtime should do it, allowing the rest of his waking hours to focus on his jellyfish.

But lovesickness had its dark shadow side. Thomas Henry suffered from serious and debilitating depression throughout his life (which makes his prodigious output all the more remarkable). And so did his “Inheritor” (Leonard Huxley’s term for his son, Julian Sorell Huxley). Thomas bequeathed more than his library to his grandson. With it came the burden of expectation, generational pressure, ambition, and the kind of intelligence that could simultaneously suffer and analyse some of the causes of his mental agony — self-inflicted or externally imposed.

Julian was every bit as complex and volatile a human being as his forceful grandfather. And he was, again like his grandfather, skilled at communicating science to a wide public. (They were “unquestionably the founding masters,” Bashford claims.) In Julian’s case, this is perhaps unsurprising — he came out of a family of professional wordsmiths. Thomas Henry and Henrietta’s second son, Leonard, married Julia Arnold, granddaughter of Thomas Arnold of Rugby, niece of the poet Matthew, and sister of novelist Mary Augusta Ward. Julia founded Prior’s Field, a progressive school for girls, and was a formidable woman and educator for all of her short life (she died at forty-six). Her photograph is the other riveting “see-right-through-you” portrait in the book.

Julia and Leonard’s third son, Julian’s brother, was Aldous Huxley. The Huxley family all wrote poetry. They lectured, taught, and wrote novels, essays and memoirs. (Bashford includes a helpful five-generational family tree — one of a number of illustrative “trees” in a book where the crossovers of evolution, descent, genetic inheritance, ecospheres, ethnology, zoology, anthropology et cetera often call for a reader as “disciplined” as T.H. Huxley himself.)

And the communication line continued: Julian was successfully hectored into writing for a general public by H.G. Wells; he made films, winning an Oscar for his Private Life of Gannets in 1934. David Attenborough’s first television production was presented and narrated by Julian Huxley. He was prominent in wildlife conservation, a correspondent and friend of Jane Goodall. In 1975, the year he died, the first edition of Peter Singer’s Animal Liberation: A New Ethics for Our Treatment of Animals was published. Bashford: “Between them, Thomas Henry and Julian Huxley embodied and enacted the modern shift in animal research and animal ethics from imperial natural history, in which animals were collected, and then pinned, stuffed or pressed, to the modern phenomenon of the ‘zoo’… and onwards to early environmentalism, the ‘conservation’ of wild species and their habitats.”

The organising principle of Bashford’s Intimate History is its focus on the lives and works of the two Huxley individuals, Thomas Henry and Julian. But the time span — almost 200 years between T.H.’s birth and Bashford’s reflections on the twenty-first-century relevance of Julian’s cautions about “an imperilled global ecology” — provides her reader with a panoramic view of an era of extraordinary and accelerated change.

The book asks: “How are we humans animal and how are we not? What is the nature of time and how old is the Earth itself? What might the planet look like — with or without humans — 10,000 years hence?” That the Huxleys had the nerve, the effrontery, to offer answers to these questions is a cause for celebration, and the book is, in part, a celebration of intellectual bravery. There is something disarmingly frank about Thomas Henry’s plans, itemised in 1860:

To smite all humbug, however big; to give a nobler tone to science; to set an example of abstinence from petty personal controversies, and of toleration for everything but lying; to be indifferent as to whether the work is recognised as mine or not, so long as it is done:— are these my aims? 1860 will show.

That grandfather and grandson made mistakes was inevitable. That they were fallible, sometimes irascible, often insufferable human beings is unsurprising. Perhaps more remarkable is the way they were able, sometimes, to temper and bend their natures in the search for truth, and that others of less volcanic but equal intellect loved them. Bashford: “Huxley and Darwin’s friendship was a strong one, and lifelong. They acknowledged births and deaths, the most joyful and difficult family moments alike… Their interactions were sincere, direct, authentic and forthcoming.”

You could strip out all reference to personal and family life from Bashford’s work and still have a vivid, fine-grained account of the complex history of evolutionary theory, natural selection, sexual selection, the decline and revival of “Darwinism,” and the mutations and developments during the century after Darwin’s death (language that mixes Darwin and Mendel is always a metaphorical minefield). Many of the (male) players would still appear, T.H. Huxley and his anatomist antagonist Richard Owen would still do battle (“a silverback and a blackback asserting dominance in the family group that was British natural scientists”), and the intricacies of the intellectual disputes would still be teased out. But the story would be a partial sketch of their world, and readers can, in any case, go elsewhere for evolutionary history (Bashford’s unobtrusive forty-page index might be a start).

This is social and scientific history, the two inextricably combined, its great virtue being that it provides the context, the “ecosphere” if you like, in which ideas were explored by men and women who depended on one another, and for whom thinking was as natural as breathing.

Bashford is clear-eyed about the blind spots of her protagonists. T.H. Huxley, “the nineteenth century’s most famous fact-finder and lover-of-evidence fell in with presumptions about higher and lower humans.” We could call those views “racist” now. But in doing so we’d have to contend with the complexities of debate about what “race” means, if anything. Julian’s investigations into eugenic theory could easily (but incorrectly) be confused with the National Socialists’ deadly application of it. And as Thomas Henry refuted the theories of his contemporaries, so Julian corrected, adjusted, modified and developed the theories of his grandfather and his grandfather’s great friend and colleague Charles Darwin. So, we move forward, step by imperfect step, leap by occasional leap.

The melancholia that afflicted Thomas Henry on HMS Rattlesnake was visited on Julian. (It seems to have skipped over his father Leonard.) His sexual life was fraught, from the time of juvenile infatuations at Eton to his hectic affairs before and throughout his long married life to an assertive and yet loyal Juliette Baillot. For Julian’s memorial service, Juliette, with their children Anthony and Francis, designed the cover sheet. It depicted two birds facing one another, derived from Julian’s best-known (to this day) zoological work, The Courtship Habits of the Great Crested Grebe.

By the time of his death in 1975, eighty years after that of his grandfather, and ninety-three after Charles Darwin’s, the world was in a position to understand, much more fully and richly, “man’s place in nature.” But Julian Huxley was also keenly aware of the fragility of ecosystems; he lived through the Cuban missile crisis and understood how modern humanity, for all its knowledge, could obliterate itself and its place in nature. And in 2022, his grandfather’s ambition to “smite all humbug” and show “toleration for everything but lying” resonates like thunder. •

An Intimate History of Evolution: The Story of the Huxley Family
By Alison Bashford | Allen Lane | $59.99 | 576 pages

Morag Fraser was for many years Editor of Eureka Street. She is writing a biography of the poet Peter Porter.