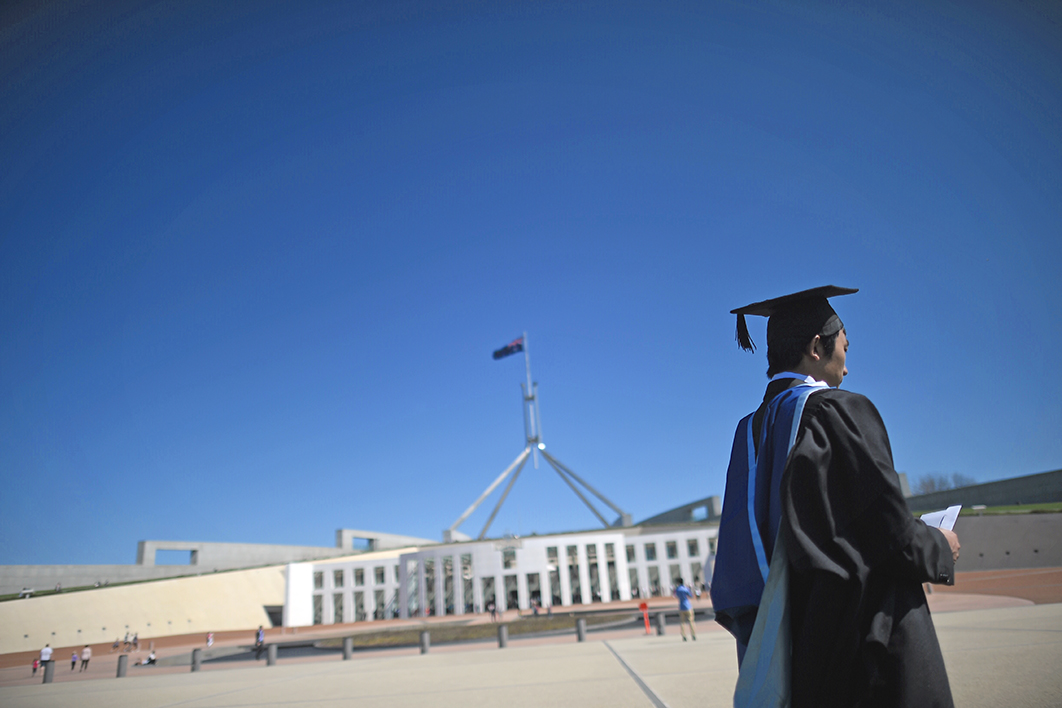 Who is responsible for ensuring that any young Australian willing and able to undertake a university education can get one? The answer, which may surprise many, is “no one.” Except for the five years from 2012 to 2017, government policy has explicitly limited the number of places eligible for public funding, meaning some potential students must miss out. And even under the “uncapped” system between 2012 and 2017, the university system wasn’t obliged to provide education to all who needed it. Universities could and did restrict entry — to manage class sizes or improve their average entry cut-offs, and thereby their prestige.

The contrast with school education, where the government accepts a responsibility to educate all children either in public schools or publicly funded private schools is striking. The distinction dates back to the nineteenth century, when the states legislated for free and compulsory school education through government education departments. The sandstone universities were established around the same time, also under state government legislation.

University education was confined to a tiny elite who could afford to pay fees beyond the reach of the average family. Unlike schools, they were set up on the English model as independent institutions not directly answerable to their state government. They could accurately be described as quasi-non-government organisations (unlike many other organisations given the widely used, and misused, label of “quango”).

As the demand for education increased after the second world war, the Menzies government greatly expanded federal funding. New universities were created and existing universities expanded. The process continued through subsequent decades, with teachers’ colleges and institutes of technology eventually converted to universities.

Tuition fees, which had largely been offset by Commonwealth scholarships in the 1960s, were abolished under the Whitlam government after is election in 1972. Although a reintroduction of fees was raised repeatedly, the eventual outcome was the HECS-HELP loans scheme, under which student contributions are collected by the Commonwealth through the tax system.

The result is that universities, despite their theoretical independence and their state-level legislative authorisation, depend primarily on the federal government for their funding; and that funding comes with a wide range of conditions. Even as the funding has been constrained, the conditions have grown more onerous, boosting the size and power of university bureaucracies. Yet the fiction of independence allows the government to deny its responsibility to provide enough funding to educate Australian students. Universities have had no choice but to enrol large numbers of fee-paying international students.

As well as serving two government masters, therefore, universities must answer to a third, the global education market. The result is a set of institutions with the rigidity of government bureaucracies and the marketing and management bloat of private corporations. Universities compete with each for students and other resources, but are under no obligation, individually or collectively, to provide higher education to all who could benefit from it.

Until the pandemic, this arrangement was convenient both for university managers and for the federal government. Vice-chancellors could pay themselves million-dollar salaries on the basis of comparisons with private sector chief executives, and surround themselves with fleets of senior managers and assistants. Meanwhile, the subsidy from international students gave the government an excuse to reduce its own funding.

The pandemic has exposed the unsound structure of the whole system. The Morrison government is maintaining that the universities’ reliance on international students was a bad business decision rather than a choice necessitated by its own funding decisions, and has refused to inject extra funding. For their part, university managers have rejected the National Tertiary Education Union’s proposals to protect jobs, which involve temporary wage cuts — with the largest being borne by those at the top — jointly overseen by unions and university managers.

In rejecting the union’s proposal, managers at Melbourne University and elsewhere have argued that the nineteenth-century state legislation under which they operate prohibits them from sharing the management role with workers. As Campus Morning Mail points out, their rejection of the union offer gives the federal government a perfect excuse for continuing to exclude public universities from the JobKeeper package, despite Scott Morrison and his colleagues having shifted position in order to bail out private universities.

The situation of universities might be bad, but the plight of vocational education is far worse. Free-market reforms aimed at promoting competition have gutted most states’ TAFE systems while generating a swarm of shonky operators. Although the worst abuses have been checked, we are further than ever from a reliable system of vocational education and training.

The pandemic crisis provides the opportunity for a radical restructuring of the entire system. In place of the current hodgepodge we need a unified national system of post-school education and vocational training. It should be funded by and responsible to the Commonwealth, which can use the income tax system to manage HECS-HELP funding.

All young Australians should have the right to free post-school education and training, appropriate to their needs. Rather than competing among themselves, and replicating each other’s offerings, universities and TAFEs should cooperate to ensure that students have access to a full range of educational opportunities. •

From the archive “The preservation of pure learning” Frank Bongiorno 4 June 2021 The pandemic has exposed longstanding problems in Australian universities. But it’s possible to map a way out
Close