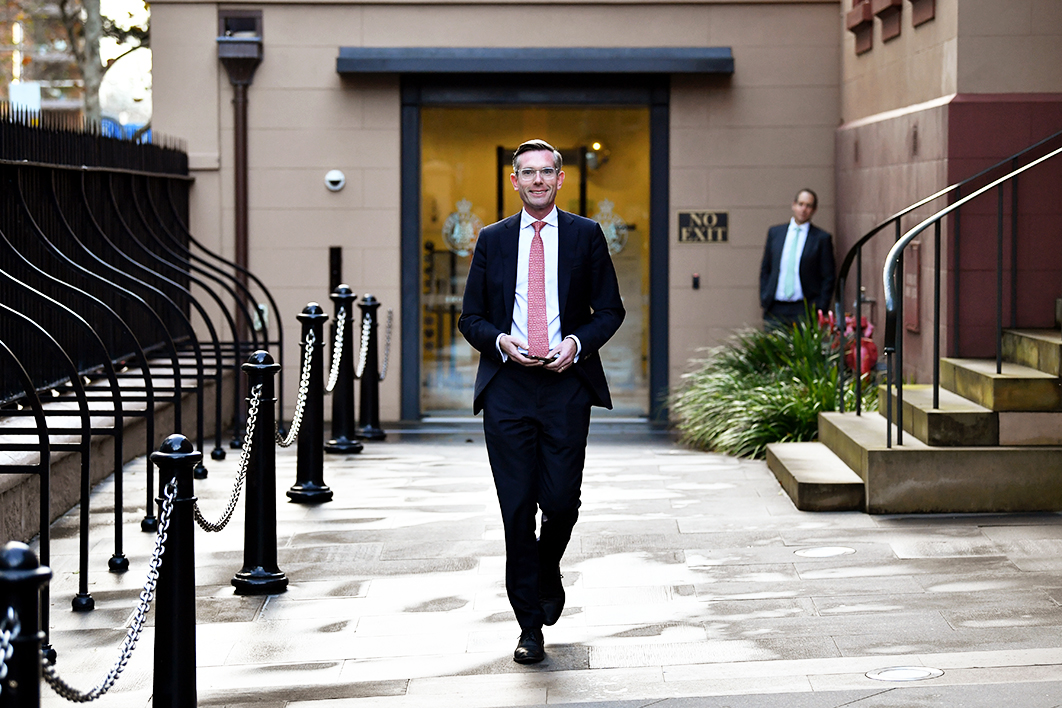 With Dominic Perrottet set to become NSW premier in the wake of Gladys Berejiklian’s resignation, the power dynamics of the Liberal Party will shift significantly, not only in the largest state but also nationally. For the new premier’s factional opponents, the NSW moderates, it will be the latest in a series of blows.

For almost half a century, the well-organised moderates have fought tenaciously to limit the influence of the state’s hard-right faction, which they dubbed “the Uglies” when it first came to prominence in the 1970s. The moderates’ grip on the party’s powerful administrative apparatus ensured that the leadership was never in thrall to the right, and kept the premier’s job — from Nick Greiner and John Fahey through to Barry O’Farrell and, more recently, Gladys Berejiklian — safely out of the right’s hands.

Mike Baird, who succeeded O’Farrell in 2014, emerged as a compromise candidate when the right effectively blocked the moderates’ choice of Berejiklian, then deputy leader, because of her prominence as a factional activist. While nominally a moderate, Baird’s strong Christian credentials and espousal of “family values” (read anti–marriage equality) won him support from the right. But Berejiklian’s solid performance as treasurer under Baird made it impossible for the right to block her rise to the top when he unexpectedly resigned in 2017. It also lacked a credible candidate.

Perrottet, as deputy leader and treasurer, has by and large performed strongly, despite his questionable management of the workers compensation body, icare. In the absence of a single stand-out moderate challenger, he is likely to take the top job, with moderate Stuart Ayres as deputy leader.

The NSW Liberals are, and always have been, a cantankerous bunch, their character deeply rooted in a distinct path of evolution. In Victoria, until very recently, the Liberal Party was the political establishment, holding office more often than not. Its web of patronage was extensive and deep, the names of old money and old families — like the Baillieus and the Napthines — woven seamlessly into the fabric of political life. This was the home of Victorian radicalism, where middle-class liberals like Alfred Deakin introduced far-reaching, progressive reforms. An integral part of their overall social package was tariff protection, which had benefits for manufacturer and worker alike.

New South Wales was different. The pastoral ascendancy had set the economy off on a different trajectory, that of free trade, and the state’s political and social development took a corresponding course. Indeed, so divergent were the dominant ideologies of the two states that they threatened to derail the process of federation. Liberals in Victoria looked to a constituency of both working- and middle-class interests, but in New South Wales it was the nascent Labor Party, rising from the bitter strikes and depression of the early 1890s, that began to gather strength among the working class. Labor was much slower in gaining a foothold in Victoria.

The situation in Victoria is almost the reverse, with Labor enjoying only brief periods in office until 1982–92 and 1999–2010. Just as Labor dominated in New South Wales for an era, so too did the Liberals in Victoria for twenty-seven unbroken years, from 1955 to 1982.

These sharp differences in opportunities to exercise political power and build networks of patronage account for discernible differences in the character of conservative politics in the two larger states. An establishment party in Melbourne, well-entrenched and confident, contrasts with an outgroup in Sydney, resentful and opportunistic. As the political scientist James Jupp observed almost sixty years ago, the NSW Liberals had “a right-wing ratbag character” and an “oppositional mentality” that was absent in Victoria. The ever-present danger, he wrote, was that without strong leadership and the prospect of electoral success “instability in leadership and severe factionalism” would result.

Only three NSW Liberals have led the party to victory from opposition in eighty years: Bob Askin in 1965, Nick Greiner in 1988 and Barry O’Farrell in 2011. All three came to the leadership after tribal warfare had felled a series of predecessors in quick succession. Both Askin and Greiner offered what the party desperately needed — strong leadership coupled with the likelihood of imminent electoral success. Barry O’Farrell’s case was different: he came to office as an uneasy compromise and had to wait until the Labor government imploded under its own steam before he gained the premiership.

In a sense, O’Farrell never dampened the tribal fires in the way that Greiner and Askin had. While he might well have been the architect of his own downfall, he was never really secure. To understand that insecurity means understanding the complex network of tribal allegiances that make up the NSW Liberal Party, which have now also become part of the fabric of the federal party.

John Howard was a typical product of the NSW Liberals. Growing up in a small business environment in suburban Sydney, he saw Labor’s shadow everywhere: not just in the state government, which it ran with the trade unions, but also in local government, the churches, the legal profession, the judiciary and even business. Labor was the ubiquitous enemy that had to be defeated; it was not just a political opponent, its very culture was toxic and needed to be eliminated from the body politic and public life in general.

It is a telling insight into the NSW Liberal mind that of almost 3000 party members polled in a survey in 2014 by Macquarie University’s business and economics faculty, 89 per cent strongly agreed that among their reasons for joining the party was a desire to “to keep Labor out” (compared with 55 per cent wishing “to help local candidates,” for example).

In a tribal sense, keeping Labor out means not resembling Labor in any way (a criticism the party’s right wing makes of its moderate opponents). The basic argument of the moderates, little changed down the years, is that the right makes the party unelectable by making it unappealing to “soft” Labor voters, a view that many on the right, in its various sub-tribes, see as akin to apostasy. But pragmatists on the right see the logic in that argument and are prepared to tolerate a leader of moderate inclinations under certain circumstances. O’Farrell, though formally unaligned, was tolerated in precisely this way.

The moderates are broadly though not entirely homogeneous. The right is divided on a number of issues, with marked tensions between social conservatives, committed Christians and social libertarians. Across these divisions, it is further split into three distinct sub-groups which, for want of a better label, comprise a soft right, centre right and hard right, the last dubbed “the Taliban” by the moderates and largely taking over from the Uglies. Their involvement in branch recruitment and preselection contests is seen as more organised and focused than that of the moderates, which gives them a disproportionate say in party matters.

All of which brings us to Dominic Perrottet, the man likely to be premier. The third eldest of twelve children, Perrottet was instrumental in dislodging the moderates from control of the Young Liberals a little over a decade and a half ago, and served as the organisation’s president in 2005. He was a protégé of right-wing powerbroker David Clarke, sat on the party’s powerful state executive from 2008 to 2011, and entered parliament in 2010.

His elevation to premier, which has John Howard’s support, will strike a blow at the moderates. His influence will be quickly felt in a practical sense, for he now has the chance to give effect to his opposition to a conscience vote for Liberals when parliament debates the forthcoming bill on assisted dying. His is the only state not yet to have legislated on the issue.

The impact in the federal arena will most likely be felt in the scramble for preselections for next year’s federal election. The moderates have blamed the right for having lost Tony Abbott’s old seat of Warringah to an independent, and with more independent challenges flagged for hitherto safe Liberal seats, factional issues will be clearly in view.

As for the state moderates, they will face an existential crisis, their very raison d’être having been called into question by a series of events: Malcolm Turnbull’s toppling by the right, Scott Morrison’s increasing rightward drift, most recently marked by the promotion of Alex Hawke into cabinet, and — if it happens — Perrottet’s rise to the state leadership. •