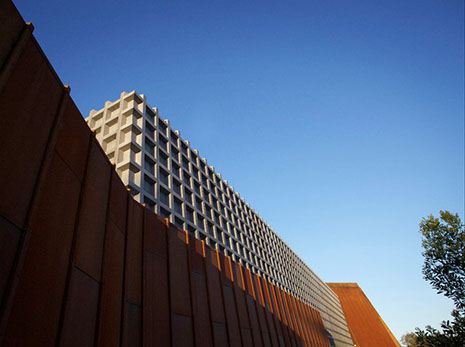 “I happened to make some money”: Hobart’s Museum of Old and New Art.

TASMANIA has long been stereotyped as the land that time forgot. Provincial and punitive (cue: criminalising gays, bashing greenies, the prose of Richard Flanagan) and poor to boot (cue: psychological and practical dependence on the twinned purses of Centrelink and Canberra). Naturally and often sublimely beautiful, of course – all that stunning World Heritage wilderness, all those photogenic mountains and forests and lakes – and lately delivering a picnic basketful of brie, bubbles and blueberries to visiting gourmands. But ultimately still culturally backward (cue: sound of banjos twanging, champion axes swinging, with blokey white-singlet costume). That prejudice has long tentacles – on a recent working visit to Paris, I was smirkingly introduced as “a Tasmanian intellectual.” I laughed. So did everyone else.

Did the carapace of that caricature start cracking last weekend?

It started with a bang on Friday night – or four o’clock in the afternoon, to be exact – with the invitation-only party to open the Museum of Old and New Art in Hobart, followed by a weekend of musical playtime welcoming the wider public. Designed by Melbourne architect Nonda Katsalidis, MONA perches on the bank of the Derwent River in Hobart’s traditionally unfashionable and down-at-heel northern suburbs, near the original home of its (lately) mega-wealthy owner and bankroller, Tasmanian gambler David Walsh.

Everyone arrived unfashionably on time. Most zoomed in on a fast ferry from Hobart’s waterfront, taking in the passing views of a zinc works, a catamaran factory and random McMansions on the banks of the river’s opposite shore. There were 1500 VIP party people in total. The guest list was strongly Tasmanian, complemented by a heavy-hitting offshore arts industry and media contingent, plus an eclectic selection of old and new “friends of David.” Despite hysterical build-up rumours, these did not visibly include David Bowie or Mick Jagger, which was somehow reassuring. Walsh himself reputedly made a mid-party announcement over MONA’s public address system. No one heard it over the hubbub. Once we reached MONA’s dark and cavernous interior, the sensation was overwhelming. But first we passed a small mountain of Bruny Island oysters on ice, heaped on a tennis court plonked on a rooftop evoking Melbourne’s Federation Square (except with real water views), then entered a mirrored portal and sank three storeys via a tubular glass lift with wraparound staircase.

Party central was a vast space running off the Void bar, which welcomes descending visitors with Walsh’s Moorilla wine, Moo Brew boutique beer and rosemary and elderflower martinis. The bar is flanked by the spectacular raw sandstone wall of the original cutting, which I saw one talented twenty-something pianist licking at around five o’clock. Guests jostled near tables heaving with food; behind was a cinerarium by New Zealand artist Julia De Ville showcasing Walsh’s late father’s ashes in something resembling a noir Fabergé Easter egg. Chunks of gamey terrine, displayed with a still life of freshly killed, unskun rabbit and deer (Walsh is a dedicated vegetarian); bamboo boatloads of sushi from Masaaki of Geeveston (that’s forestry industry heartland); piles of the greenest salad I’ve ever tasted – an impossible medley of broad beans, zucchini flowers, lime, apple tarragon, basil oil and pistachio macaroon; real caviar accompanying great vodka, served with a flourish rarely seen outside Moscow; a ziggurat of perfect Tasmanian stone fruit; and another, sweeter pile of what looked like dismembered wedding croquenbush. All this led inexorably to another bar, framed by the seductive, watery swish of Julius Popp’s Bit.Fall. Wow, it googled in my face in dripping diamonds, then wild, then wtf?!… or was I hallucinating?

Probably not, as the Void hadn’t yet sprung into full gleaming green absinthe action. Yet possibly so, because I’d just taken my first full gulp of the just-hung offerings in MONANISMS, the opening exhibition comprising some 460 of Walsh’s favourite works from his larger collection.

MONA’s worth double the airfare, from anywhere, just to see Sidney Nolan’s massive Australian modernist masterwork Snake unleashed as intended, even if your taste doesn’t extend to Belgian artist Wim Delvoye’s stinking Cloaca Professional, specially commissioned for MONA. A collapsed Catholic, Walsh prides himself on his iconoclasm. “David hopes to shock and offend,” pronounces a fact sheet, and confronting reactions to sex and death are a famous focus for this maverick collector. Ponder the opening definition of MONANISMS: monanism [moh-nuh-niz-uhm] – noun. obsessive activity characterised by an inability to discriminate between normative public behaviour and displays of immorality and alternating self-loathing and egoism. a behavioural disorder which, when observed by a representative member of a population (esp. Australian) elicits the epithet “wanker.” Origin: 2010; by prothesis from onanism. There are no wall labels, no “artwank” (MONA’s term, again) experts telling you what to think about any of it… but you can press O on a real iPod, featuring MONA’s smart-spinning “+ X” logo and pink/black branding, for randomly generated infoblurbs, many written by Walsh, then email them to yourself – obsessively, and indiscriminately, if you wish; museum entry is free, including the toys. And the catalogue can be purchased online; $130 with postage. Its heavy, black-spun pages open with a gratifying crackle. After reading it you may wish to genuflect.

“Nothing succeeds like excess,” quipped Oscar Wilde. “Let them eat cake,” Marie Antoinette almost certainly did not. Does that approach sum up MONA? “I happened to make some money,” Walsh recently told the ABC’s Arts Online. “I felt some guilt, some desire to do something with it,” he continued, “You know, get myself off my bum.” And he truly has. MONA is as wild as a rainforest, elegant and gratifyingly unboxable. It’s a brand spanking new potential pillar of civil society. It’s the agora Tasmania needed to have. But is that enough to take us to a tipping point, where the freer-wheeling, open-thinking style that MONA represents isn’t just a hideaway from more dour realities – the equivalent of slinking into a porn store or a nightclub called Luvvieland? How typical was the reaction of Renate from nearby Rosetta, who told the Mercury newspaper she found MONA “moving and emotional – I cried. You have to check your attitude at the door, open your heart and your mind and you’ll be moved.” Outside MONA’s walls of wonderment, what are the real options for a still substantially undereducated and underemployed Tasmanian population, many hammered hard (existentially as much as economically) by a decline in legacy industries including forestry – still waiting for then-premier David Bartlett’s undeniably attractive food bowl and NBN visions to translate into pay cheques?

“Wow!!!” typed Tasmania’s personable then-deputy premier, treasurer and arts minister Lara Giddings into Facebook the morning after the opening – was she also channelling Bit.Fall? – “Mona is world class brilliance here in Hobart.” Like, like, like.

“Not all of the art works will be to everyone's taste, but then David Walsh would be disappointed if they were,” she continued. In hindsight this was a prudent qualification, given the overwhelming family-values flavour of Bartlett’s departure as premier just one day later, and subsequent attention on Giddings’s own unmarried, childless condition when she succeeded him. (For the record, that ground is surprisingly safe. Adults who look parental are warned about child-sensitive material on entry, and the five-year-old boy I accompanied to MONA later that weekend really loved Erwin Wurm’s shining red Fat Car, James Angus’s Truck Corridor and hitting the O).

“Thank you David for a great night,” Giddings went on. She meant Walsh, not Bartlett, although fair-minded Tasmanians would agree the two men have shared important future-seeking qualities, and the Bartletts certainly fronted and frocked up at the MONA party for their last big gig as Tasmania’s First Couple. Then Giddings signed off with this – “And more importantly for investing in Tasmania in this way.”

How that unusually high-stakes dice roll may pay off, and the role our new premier may play in the next chapter of Tasmania’s story, remains to be seen. •

Natasha Cica is Director of the Inglis Clark Centre for Civil Society at the University of Tasmania.

Back as PM: Sir Michael Somare (above).
Photo: Commonwealth Secretariat 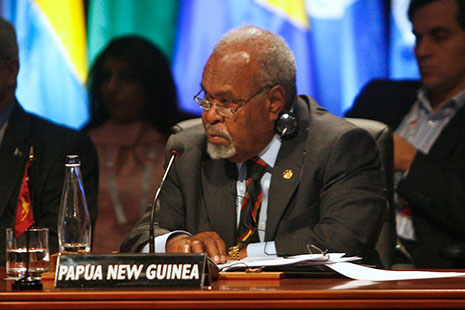 Back as PM: Sir Michael Somare (above).
Photo: Commonwealth Secretariat