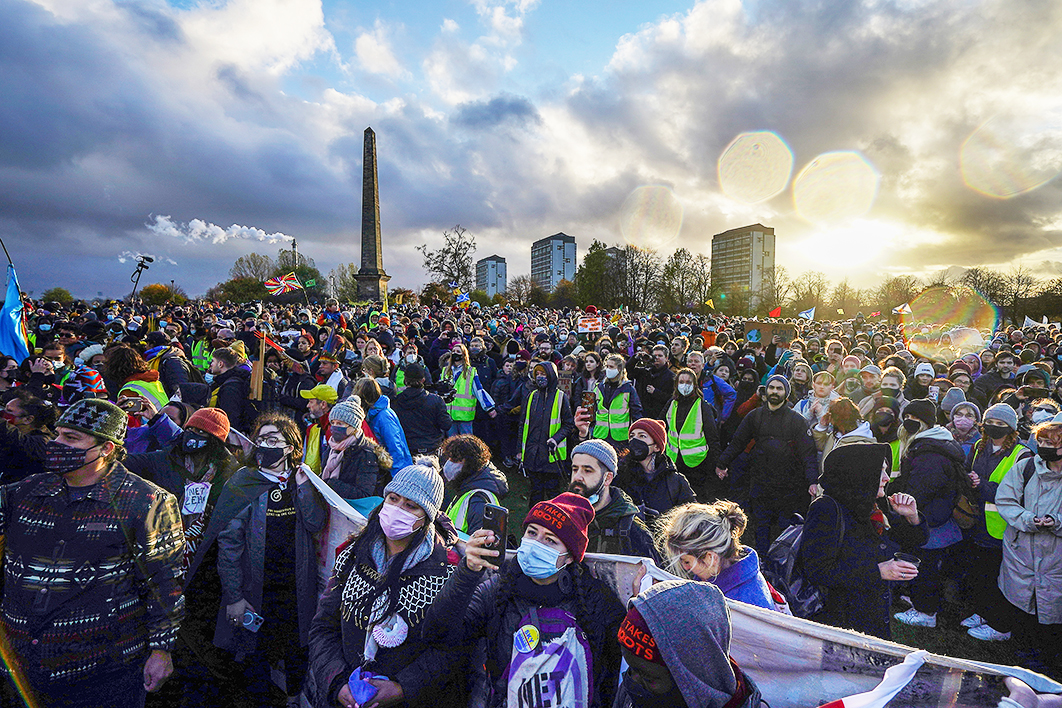 The great Scottish comedian Billy Connolly used to say that Scotland only had two seasons. “June. And winter.” The benign weather that welcomed COP26 delegates to Glasgow was always likely to end with the heavens opening. It was just a shame it happened during one of the few outdoor events of the conference fortnight, the climate change march through the streets of the city on Saturday. But the rain and cold seem not to have deterred the 100,000 people who took part, or indeed the other 100,000 or so who attended parallel demonstrations in London and other British towns and cities — with many thousands more reported around the rest of the world.

Colourful and noisy, the Glasgow demonstrators waved a diverse range of banners and placards. But one seemed to dominate. “Make it a fair COP!” said the bright yellow hearts waving above the marchers’ heads. “Climate justice now!” It expressed the marked shift within the climate movement over the last few years, in Britain and elsewhere. This cause is no longer just about protecting future generations from the likely ravages of a warming planet. It is about defending the poorest peoples of the world from the devastating impacts they are experiencing right now.

After all, the idea of “climate justice” expresses a profound truth. Climate change has been caused by the burning of fossil fuels over two centuries in the richest countries of the world. It is indeed what has made them rich. But it is wreaking its greatest damage on the poorest countries and people; indeed, it is making many of them very much poorer.

I walked for a while alongside a group wearing brightly coloured national costumes. They came from some of the low-lying Pacific islands that will cease to exist if sea levels rise as currently predicted. Walking with them was Tishiko King, a Torres Strait Islander and campaigns director of the Australian youth environmental organisation Seed Mob. She was there, she said, to stand shoulder to shoulder with First Nations across the world fighting for the rights of indigenous peoples. “Too often our voices are missing when decisions are being made that impact our future,” she told me. “So if world leaders won’t hear us in the conference, we’ll make sure they’ll hear us on the streets!”

Nearby another Australian, Caroline Sherwood, held a homemade banner depicting Scott Morrison with his head in the sand in front of a massive coalmine. The Sydneysider said she was ashamed of her government. “Their plan to meet net zero by 2050 is nothing more than a public relations exercise: it has no substance,” she told me. Almost everyone I spoke to, wherever they were from, expressed similar shame or disappointment. They all noted the gap between politicians’ rhetoric and what they themselves saw happening.

At the “Fridays for Future” march the previous day, though, the mood had been different. This was the demonstration by the young people galvanised by Greta Thunberg’s weekly “school strikes” — around 20,000 of them — and they, like Thunberg, were angry. Though COP26 was only halfway through, Thunberg told the crowd, it was already a failure. The politicians were all talk and no action. It’s just “blah blah blah,” she said, repeating the catchphrase that has reverberated around the global media this past week.

To the young people I spoke to, almost all of them under twenty-five, climate change feels like an existential threat. One banner put it simply: “You’re stealing my future!” At a personal level, the prospect of living in an unstable world of frequent natural catastrophes and geopolitical conflict fills many with deep anxiety. A recent Pew poll of 10,000 young people in ten countries found nearly half admitting to climate-induced feelings of distress that affected their daily lives. Almost four in ten said they were not sure if they would want to bring children into such a world.

At a political level, the young people’s concerns are much more directed. They are angry with their parents’ generation. It is those born before 1970 — as several of my interviewees made pointedly clear to me (born 1960) — who have failed to act on climate change over the past quarter century. And it is they, the millennials and “generation Z,” who will suffer from our self-indulgent and selfish lifestyles.

And many of them are angry at capitalism too. This was a powerful thread running through the assembled slogans. “Systems change not climate change!” said one banner. “Uproot the system!” demanded another. And a third: “Environmentalism without socialism is just gardening.”

Wit aside, this was no throwaway rhetoric. These young climate activists offer a powerful critique. Capitalism has caused this emergency. So only getting rid of capitalism can solve it. It’s an argument fed by some serious scholars and bestselling writers. In her book This Changes Everything: Capitalism vs the Climate, the Canadian author Naomi Klein argues that the modern capitalist economy, run by huge corporations and financial interests, and feeding on mass high-carbon consumption, cannot reverse its core dynamic of material growth and human exploitation. Only economic transformation, based on the principles of ecological sustainability and social justice, can do that.

The core demand of the radical climate movement is for a “green new deal”: a thoroughgoing program of public investment in reducing emissions and restoring nature, combined with new rights and higher wages for workers and oppressed minorities, and constraints on financial capital. Its most famous champions are Klein — whose most recent book sets out the case — and the young US politician Alexandria Ocasio-Cortez, whose millions of followers on Twitter and Instagram attest to the power of her inspirational rhetoric (as well as her effective interventions in the US Congress). Thousands of young people have become local and national activists for a “GND” in America, Britain, and elsewhere across the world.

Listening to young people articulating these arguments it would be easy to dismiss them as the usual activist minority. But the Pew poll should make politicians ponder. Around 65 per cent of those surveyed around the world felt governments were failing young people. These are voters (or in some cases soon will be) and it is pretty clear that climate change will determine how many of them vote.

They have already shaken up the environmental movement. Only a few years ago that movement was led by the “big logos” — Greenpeace, WWF, Friends of the Earth and the like. Today the running is made by young climate strikers, direct action groups blocking roads and chaining themselves to bulldozers, and students forcing their universities to divest from fossil fuels. It’s Greta Thunberg whom the media now turn to first. Here at COP the dominant civil society voices are groups from the global South rather than their Western counterparts. The new political power of radical and predominantly youth-led climate activism is everywhere apparent.

And yet there is something paradoxical about this too. Because looking at the climate science — and there is also plenty of that on show in Glasgow — it is the urgency of the required action that presses most strongly. The Intergovernmental Panel on Climate Change warns that global greenhouse gas emissions must be cut by 45 per cent by 2030, en route to net zero by around 2060. It is difficult to imagine capitalism being overthrown in that kind of time. In practice, capitalism will have to solve the climate problem, or it will not be solved.

There are plenty of capitalists here who will tell you that this can be done. Companies with climate solutions are out in force: hundreds of them boasting of their new and cheaper green technology, their expert financial and consultancy services, their innovative new product just waiting for some government policy to make it profitable.

Their business rivals are here too, of course. Global Witness has enterprisingly counted the number of representatives from the fossil fuel sector registered for the conference and noted that, at over 500, it is more than any country has brought. Most of these companies are claiming to be turning green (if gradually), but few observers are very convinced. A recent report by the UN Environment Programme found that current plans for oil and gas drilling and coalmining globally amount to twice the level that would be allowable under a scenario in which global heating were limited to the COP26 goal of 1.5°C above pre-industrial times.

Can capitalism be greened? It is the question that underpins the entire conference, though it won’t be mentioned in the negotiating rooms and is too provocative for most of the fringe meetings. The answer in practice is likely to have two parts.

First, it won’t be greened by itself. Almost all the progress in environmental technologies and consumption patterns over the past thirty years has come about as a result of government policies. Energy efficiency standards, pollution regulations, renewable energy mandates, conservation orders, product bans, green taxes, emissions trading schemes, research and development subsidies: it is the panoply of state interventions in markets that have driven such progress as we have had. And it is much more far-reaching interventions that will be needed if fossil fuels are to be squeezed out of the global economy and investment in green solutions increased to the levels required. There might even be some people who would question whether an economy subject to such intervention should still be called entirely “capitalist.”

Second, this will be a continuous battle, for every policy put forward will be opposed by an incumbent interest. The fossil fuel representatives gathered in Glasgow are as nothing next to the number of their lobbyists who are being deployed in national legislatures. The banks and pension funds will carry on financing them until they are legally prevented from doing so. For every politician with green voters to satisfy there will be another — often the same one — with local high-carbon jobs at risk and consumers complaining about higher prices.

In this field of political conflict — one that will inevitably dominate the next decade — it matters that there are people on the streets and young people who are angry, for the demonstrators in Glasgow and elsewhere across the world are setting the terms of the debate. Climate justice, fairness for future generations, net zero, 1.5°C, a green new deal, green capitalism and anti-capitalism: we are only going to hear more of this argument. For those seeking to understand what the political and economic future might look like, this will surely be it. •

Michael Jacobs is Professor of Political Economy at the University of Sheffield and a former climate adviser to British prime minister Gordon Brown. He is reporting from the Glasgow COP26 for Inside Story.

Books & Arts Why the rush? Sarah Barns 21 January 2023 A new book about urban mobility invites us to think differently about our streets: who do they belong to, what are they for, who gets to decide?
Close