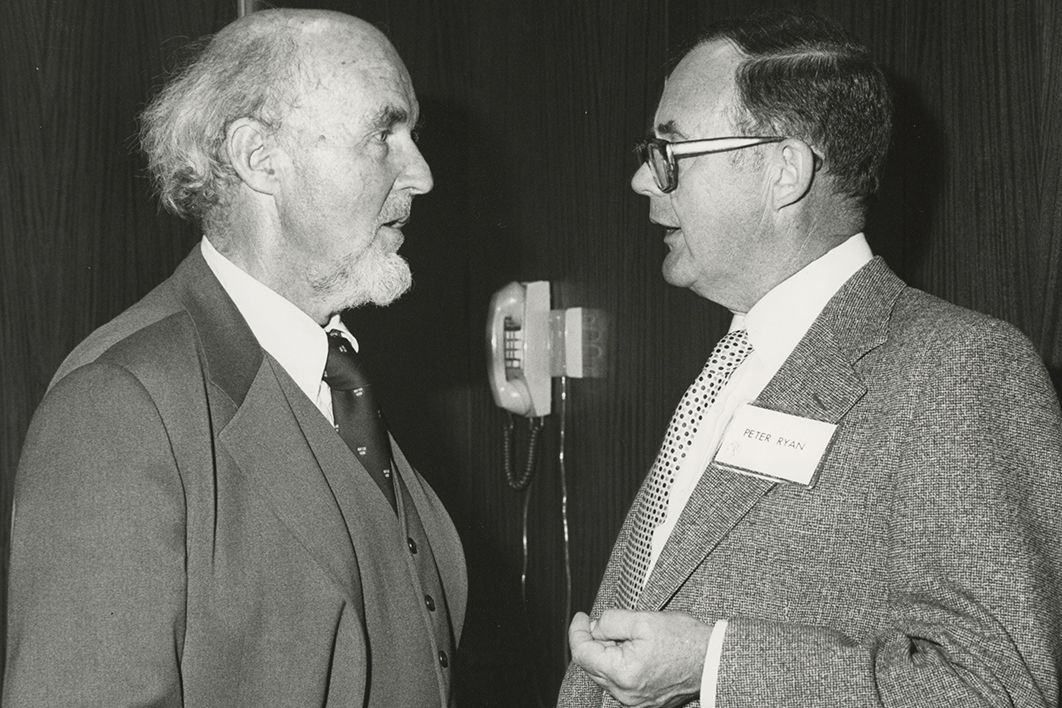 Manning Clark and Peter Ryan at a book launch at the National Press Club in April 1980. University of Melbourne Archives

“This essay is an overdue axe laid to the stalk of a tall poppy.” So began Peter Ryan’s notorious attack on the work and character of the famed historian Manning Clark. The blows that Ryan delivered in the September 1993 issue of Quadrant magazine were legion. He hacked at Clark for his frailties and neediness, his criticisms of others, his failings as a historian and author, his indiscretions and his drinking; then he chopped at Clark’s six-volume History of Australia, calling it a million-word construct that was “spun from fairy floss,” filled with execrable prose, and a fraud on Australian credulity. Also given a glancing blow were Australia’s professional historians, whom Ryan accused of failing to acknowledge the weaknesses in Clark’s work.

Considerable press coverage followed, partly the result of the merciless phrasing of Ryan’s criticisms but more substantially because the essay represented a significant about-face for its author. As director of Melbourne University Press, or MUP, from 1962 to 1989, Ryan had overseen publication of nearly the entire gargantuan endeavour that he now saw fit to cut down to size. Of all the things in his life that he looked back on with shame, Ryan wrote, the greatest was having been publisher of Clark’s History and having extended to Clark the support and encouragement that any author expects of their publisher.

Coming two years after Clark’s death, Ryan’s essay struck some readers as appropriate and well targeted, if also belated. For others, though, it was hypocritical, inappropriate and unnecessarily personal. The fracas raged for more than a year, with Ryan returning twice more to Quadrant to continue his poppy-felling and, seemingly, to salt the earth around it.

In this effort Ryan was joined by others, generally on the right of politics, who used Clark’s name in what would soon be termed “the history wars.” Prime minister Paul Keating had reignited those wars in 1992 when he accused the Coalition parties of being stuck in a golden age where the cultural cringe reigned and pride in Australian culture was non-existent. For Keating, Clark was a kindred spirit whose ideas echoed his own; when it came in 1993, Ryan’s attack was a “bitchy,” wretched betrayal.

For John Howard, then on the opposition benches, Clark’s vision in the History was gloomily ambivalent about the “heroic achievements” that also needed to be listed on Australia’s “balance sheet.” Over the decade that followed his becoming prime minister in 1996, he would try to dispel Clark’s vision and give more attention to those achievements, trumpeting (for example) the importance of Gallipoli.

In the years since then, Clark has attracted hatchets and haloes in near-equal measure. The subject of three lauded biographies and numerous critical studies, he has also been the target of scurrilous attack, perhaps most notably in 1996 in the Brisbane Courier-Mail, which falsely alleged that he was awarded the Order of Lenin by the Soviet Union for working as an “agent of influence.”

As the historian Stuart Macintyre wrote in 2003, Clark had endured “greater public obloquy than any other Australian historian.” Ryan’s Quadrant essay didn’t mark the start of that process, nor even its lowest point, but it made a deep notch in the public memory that is still evident three decades later.

Coming across Ryan’s initial attack six years after its publication, New Zealand historian Doug Munro became interested in the questions the controversy raised. Later, seeing Ryan fail to account for any of the contradictions in his case in the years before his death in 2015, Munro decided to embark on what he calls a “forensic re-evaluation” of the whole affair. In the background was his admiration for Ryan’s highly regarded second world war memoir, Fear Drive My Feet, which he has described as “the incomparable personal account of the New Guinea campaign.”

Munro fossicked through the archives and clippings, and spoke to all those still alive with something to say; and now, in History Wars, he tracks the origins of the affair, the circumstances that prompted it, the accuracy and significance of the claims that were made, and the broader context that they reflect. Drawing on a wide array of material that he musters with clarity and discusses with shrewd judgement, Munro might be said to revel a little too much in the detail.

But it is also where he finds the devil. In many respects, the opening line of Ryan’s essay might also have been uttered by Munro: his History Wars is an overdue axe laid to the dried-out stalk of a poppy, Ryan, who has been left to stand for much too long and in whose shadow too many untruths have been allowed to flourish.

When the Ryan–Clark controversy first broke out in 1993, Don Watson called Ryan’s essay an act of “double cannibalism”: “You live off him in life and when he’s dead you live off him again.” Ryan certainly returned to chew on Clark for years afterwards, but Munro shows that from the beginning Ryan was selective with his facts, concealing those that were inconvenient and distorting others. The distortion was so extensive that Munro has to be blunt: “Much of what Ryan says is inaccurate. He is not a trustworthy source of information.”

In distancing himself from Clark’s History, Ryan claimed that he had inherited — and thus been bound by — an open-ended commitment to publish the whole six volumes as Clark completed them. In fact, as Munro shows, it was Ryan who presented Clark with a written contract for the series, supplanting the informal offer made by Ryan’s predecessor before the first volume was published. It was Ryan who specified the number of volumes the series would include and when each manuscript would be delivered. It was also Ryan who made no provision for peer review, the process by which academic publishers usually ensure the accuracy of a manuscript.

Moreover, over the subsequent two decades in which he oversaw publication of the History, it was Ryan who allowed the terms of the contract to be varied, who encouraged Clark to continue writing when he talked of giving it up, and who repeatedly headed off any prospect of the series going to a different publisher. Far from being bound by the History, Ryan clung to it like a drowning man to a lifeline.

Munro also shows that Ryan refused to release his grip even as a beleaguered and heavily indebted MUP, in danger of going under when Ryan took over, recovered. Publication of the first volume of Clark’s work in 1962 was certainly well timed, providing the publisher with vital revenue and credibility. “It gave reassurance,” Ryan wrote in his memoirs, “to both booksellers and the public that ‘MUP is still definitely in business.’” By 1971, though, MUP had recovered its position, aided most of all by the sale of its printery and the building it occupied. By volume three, then, the lifeline that Clark’s work afforded was no longer necessary. In his original attack on Clark, and for years afterward, Ryan shuffled the pieces to hide this, but it does not escape Munro. As he puts it, acerbically, “Ryan, by his own account, sold his soul and continued to publish the History.”

Questions of integrity are rife in this book. As is well known, Clark poured his own, tortured feelings into his subjects, creating vivid portraits (perhaps even self-portraits) in the process, but at a cost to the credibility of his history. In old age, increasingly identified with the Labor Party, he put a sage’s hat atop his historian’s and made gnomic utterances purportedly drawn from his unique insight into the country’s soul. Did this make him a mountebank, as Ryan argued? Perhaps. But perhaps Ryan saw fraud because he was seeing it in himself.

Ryan had fought bravely during the second world war, had written that fine memoir of his experiences, was praised for his steady hand while director at MUP, and had been a well-regarded, if contrarian, columnist with a range of newspapers and magazines. But by the time he began drafting his essay on Clark in 1993, he had left MUP and lost his column in the Age, and was in Munro’s terms “a preacher without a pulpit.” Seeking a new pulpit — perhaps via a column in Quadrant — did he deceive himself into thinking that he had been shackled to Clark, that MUP had to publish the History? Did he realise that he was spinning his own fairy floss?

Writing thirteen months after his original essay on Clark was published, Ryan aimed another axe at the critics who had cried foul, and reiterated his criticisms of Clark and the History. In his original essay Ryan helpfully told the author of a single-volume abridgement then under way that he should simply stab the “thin verbal soup” of Clark’s work with a pin to allow the “gaseous verbal excess to hiss its way out,” leaving behind only what was important. Again, this phrase might also be used by Munro as a description of his efforts. His incisive study of Ryan’s criticism, and of the context in which the Ryan–Clark controversy played out, punctures the myths that have surrounded it and shows us what is important and what is left over: the wreckage of the history wars. •