The American way of marriage

What makes Americans so prone to marrying, and remarrying? 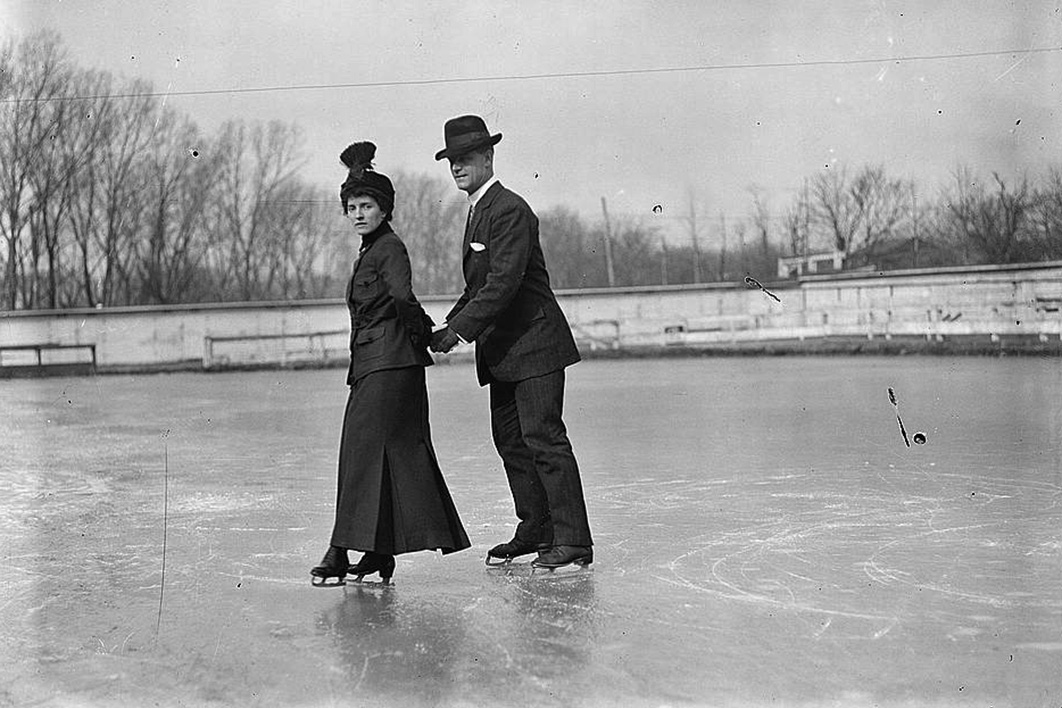 “R.P. Hobson & wife on ice skates,” photographed early in the era of the “companionate” marriage. Bain News Service/Library of Congress

Perfection: A Memoir of Betrayal and Renewal
By Julie Metz | Scribe | $32.95

The Marriage-Go-Round: The State of Marriage and the Family in America Today
By Andrew J. Cherlin | Knopf | $US25.95

One wintry afternoon early in 2003, Julie Metz, a designer of book covers, was working in her home office when she heard an odd thud. It could have been anything – a bird flying into a window, a branch hitting the roof, a parcel just delivered – so she kept on working. Like most freelancers (your reviewer included) she had a deadline to meet. But it was curious, the silence after the thud. Most of the time the house would be throbbing with her husband Henry’s perpetual motion.

A dedicated foodie, Henry had been contracted to write the definitive book on his passion and, absorbed as he was in the finer points of eating, was often moved to start cooking right in the middle of a sentence. The book’s theme was umami – the Japanese notion of what might be called the epiphany of perfection, that subtle, quietly explosive moment when a concoction of ingredients comes out just right and floors you with the sensation.

Anyone who’s seen the movie Sideways will have an idea of the kind of guy Metz’s husband was, though he was far more physically attractive than the film’s comic hero. When it finally registered that something was seriously amiss, she found him in the kitchen. Not at the stove, but spreadeagled on the floor and, despite all efforts to revive him, irretrievably dead. A pulmonary embolism had killed him instantly.

Shock enough. At forty-three, she was a widow. In upper middle-class, twenty-first century America, few expect to enter that state at such an early age. For months after Henry’s death Metz neither ate nor slept. She survived, but only because of her six-year-old daughter, the help of her family, the tender care of friends, the ministrations of professionals (psychologists, masseurs) and the neighbourliness of her small upstate New York community.

It’s not meant to detract from Metz’s suffering to note how much Perfection reminds one of Desperate Housewives. The commuter town where she lived had the same kind of slightly sinister watchfulness that prevails on Wisteria Lane. Metz had close women friends nearby, as complex and loving and bitchy as Gaby or Bree or Lynette. She even had Teri Hatcher’s job. And the place was seething with secrets – many of which, alas, centred on Henry. No surprise, then, that my reviewer’s copy is stamped with a gold medallion from the Women’s Weekly Book Club marking it as “a great read.”

Henry, it turned out, had not been the husband Metz had thought. (Nor was his name Henry; for reasons that will become clear, all the names but hers are changed.) No doubt he was a difficult partner, and the sixteen years they spent together left her with a teetering self-confidence. She never dreamed, however, that he was being unfaithful. Six months after his death, the truth came out. Not merely a demanding husband, he was also your typical philanderer. Charming, intelligent, he was a man who believed that mating with every desirable woman he met was as important as tasting a new dish. What’s more, he spread around hints of this: in the emails on his computer, in the notebooks for the umami project, and in the journal he kept, which had more about his torrid affair with a neighbour than anything to do with sushi. It was almost as if he had been challenging his wife to pick up the clues, and his disdain for her grew insofar as she didn’t. But the not-seeing wife – that’s fairly typical too.

Perfection builds a compelling portrait of the man, the one that Metz had turned her blind eye to, especially in the year before his death. He had complained of chest pains and breathing difficulties, and gnawed at his nails. Normally bordering on the manic (cook that he was, he loved to entertain), he became lethargic and self-pitying. We readers are led, as Metz was led, into one discovery, one eureka–moment after the next. There was the unfolding perfidy with the neighbour, but that wasn’t all. Henry took advantage of his food-research travels to link up with other women: a single mother in Oregon, a hippy in California, an advertising executive in New York – women he kept emotionally engaged by confiding in them through lengthy correspondences. In the end the tangled web defeated him, and was what most probably killed him. But by the time it all comes out, our sympathy is firmly with Metz.

So what did she do? Instead of suffering in silence, she confronted her demons. She made a list of the women and went through it one by one. It was a gutsy thing to do, with potential for considerable damage. But women nowadays are not inclined to take things lying down. Moreover, by daring to get in touch with the women who were complicit in Henry’s betrayal, Metz made a couple of very rewarding relationships of her own. As we are wont to say, it was part of the healing process.

Other parts of the process – the mid-life computer dating, the Botox, the adjustments of a new kind of sex life – may be familiar to many of us who have experienced single parenthood or are experiencing it now. But eventually Metz was healed enough to be able to write her book. She had met a man both she and her daughter were comfortable with, had packed up and left Wisteria Lane, settled in Brooklyn, and started life over again.

STARTING all over again. That’s what people do, especially in America. Maybe a bit too much, according to some of the experts. Andrew J. Cherlin, a sociology professor at Baltimore’s Johns Hopkins University, has written a lot about the private lives of Americans. The Marriage-Go-Round, his new book, puts Julie Metz’s predicament in its larger social perspective.

Cherlin’s contention, drawn from the findings of his surveys and those of other researchers, is that marriage in America is substantially different from marriage in comparable Western societies, including our own. Like Scott Fitzgerald’s description of a writer as a person who can hold two opposing ideas in the one conflicted head, Americans today hold marriage in high regard but are also more tolerant of divorce – even as they have grown more religious. In keeping with this contradiction, the United States has the highest rate of marriage among Western nations, a concomitant rate of divorce, and the highest rate of re-partnering.

The incidence of breakdown is higher among cohabitants, and cohabitation has been steadily increasing. Even among Julie Metz’s privileged, college-educated class, a woman is likely to have three live-in partners in her lifetime. But the people who split up most frequently are those with high school diplomas or only a couple of years of college, at a rate even higher than for those who haven’t finished high school. This represents a significant shift from previous generations, and reflects the radical and alarmingly rapid effects of economic globalisation, which has effectively gutted the American middle class. So while marriage is ever more valued, for many Americans it has become ever more out of reach.

A relatively short book, with a fair amount of scholarly recapitulation, The Marriage-Go-Round nevertheless covers a lot of ground. For gulp-down readability, it cannot compare with Perfection, but is more generous perhaps with insight. As well as examining marriage according to gender, race and class, Cherlin goes back to the beginnings of European settlement to mine the history for clues as to how marriage in America evolved.

A number of misconceptions are overthrown. For example, although the family “was society” in the first American colonies, and among the founding Puritans a man and his wife became effectively one person (that is, the husband), a divorce was not as hard to obtain as it was in subsequent centuries. The very fact that the Puritans were Dissenters meant they rejected the doctrines of Catholic and Anglican churches, which were stronger in the middle and southern colonies. Cherlin writes that “the seed of divorce was planted in the soil of the northern colonies” where, in accordance with Calvinist and Lutheran precepts, a couple could divorce on the grounds of adultery or desertion. And because, economically, marriage was an absolute necessity, remarriage was encouraged.

With carefully chosen case studies and a wealth of statistics, Cherlin tracks the changes from these beginnings to the rise of “companionate marriage” during the Progressive period of the early twentieth century, via the “togetherness” of the 1950s, to the highly “individualised marriage” Americans seek and practise today. Through this metamorphosis the individualistic elements of the American experiment, which featured among the Calvinist Puritans and were reinforced on the frontier, have grown increasingly stronger, even as economic opportunities for their expression have retreated. Americans have turned to their private lives instead, seeking personal growth and satisfaction in intimate relationships and spiritual sustenance in the burgeoning mega-churches of suburbia. However popular these strategies are, their foundations are inevitably more fragile than those held together by the mortar of marriages past.

Though Cherlin makes few judgments about this, his concern is for the many thousands of children trying to adjust to their parents’ new relationships and multiple break-ups. Their short-lived subsequent families prove wholly unsatisfactory and unstable, putting them at even greater risk than children of lone parents. His advice to these parents (as ever, mostly women) is to “slow down” before jumping into new relationships.

The figures show that Julie Metz’s class is what saved her, and that the happy ending for her and her daughter is relatively rare. Poorer mothers, hoping to pool income and resources, are often tempted to re-partner quickly, but the statistics suggest that the outcomes are generally grim. In light of this, and to increase their chances of financial independence, Cherlin proposes more government support for single parents, especially in the area of education and training, and cites moves along these lines in the state of Wisconsin. It remains to be seen, though, how much the shift to government expenditure in the wake of the financial downturn will extend to these sorts of programs nationwide.

And how different are we, down under, in what some would dub the fifty-first state of America? Australia didn’t feature much in Cherlin’s investigations; the comparable figures weren’t always available. We don’t divorce as much as Americans do, but we do have a relatively high rate of de facto relationship breakdown compared with European nations, a rate that is closest to America’s. It seems unlikely, Hillsong notwithstanding, that Australians will ever seek religious salvation to the extent that Americans do – after all, we have our sport, and our own particular history. Yet the same forces that have impacted on the private lives and the hopes of millions of Americans are manifest here, and policymakers would do well to pay attention. •

Sara Dowse is a novelist and social commentator