The Australian at forty-five

For all its faults, it’s a miracle that it exists, writes Rodney Tiffen. But the Australian could be a whole lot better 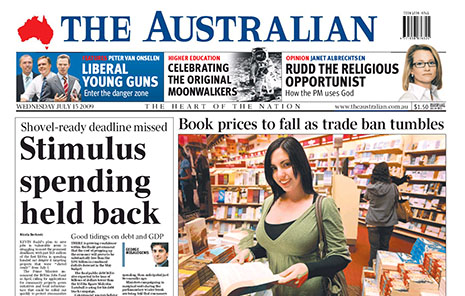 Whatever criticisms we might make of the contemporary Australian, it’s worth remembering that in many ways it is a miracle that it exists at all. Nor should we forget that, in its early days, it had an overwhelmingly positive impact, directly and indirectly, on Australian quality journalism.

When Rupert Murdoch founded the Australian in 1964, he took a massive commercial risk. Most newspapers relied on retail and classified advertising tied to the cities in which they were published. It was not clear that enough national advertising existed to sustain a newspaper. Moreover production was extremely problematic, partly because Murdoch founded the paper in Canberra. It is hard to appreciate now, in the age of the internet, just what an uncertain process national production and distribution was in those days. The Canberra edition was printed locally while plates were being flown to Melbourne and Sydney for copies to be printed in those cities and distributed elsewhere in the country. Especially in winter, when Canberra was frequently fogged in, the plates had to be driven to Sydney instead. Stories of Murdoch in his pyjamas at Canberra airport urging pilots to take off have become part of Australian journalism folklore. Even on a day of smooth production, the Australian wasn’t available in Perth until the afternoon.

Almost as great an obstacle was the conservatism of newspaper readers. In London, the most competitive newspaper market in the English-speaking world (and probably the whole world), a study in the 1960s by Butler and Stokes found that the most stable variable in respondents’ lives over five years, after date of birth and sex, was which newspaper they read. With the marketing ploys introduced from the 1970s on, thanks in no small part to Murdoch himself, that constancy became less pronounced. But the Australian in the 1960s had the difficult job of overturning established habits and establishing its own niche.

Murdoch’s competitors made life more difficult for him. Australian Associated Press, an agency controlled by the existing press owners, proposed charging him a higher rate than he thought justified, because he was publishing a national daily newspaper. And independently of Murdoch’s plans, Fairfax had made the Australian Financial Review into a daily, filling some of the market opening that might otherwise have been taken by the Australian.

Murdoch had only himself to blame for the most important obstacle placed in his way. In his calculations of business viability, a central plank was for the new paper to become the major daily in Canberra. Before the Australian began he boasted to the owner of the Canberra Times, Arthur Shakespeare, that he would drive him out of town. Shakespeare, alarmed, went and sold his paper to Fairfax, which appointed the editorial team of John Douglas Pringle and David Bowman, and made the Canberra Times much more of a vigorous and quality daily than it had ever been. The Australian never matched the Canberra Times’s circulation in Canberra, a major puncture in its business plan. Eventually Murdoch admitted defeat and moved the Australian to News Limited’s Sydney offices.

While the commercial basis for the new venture was decidedly fragile, its impact on quality newspapers in Australia was unequivocally good. The Australian was centrally responsible for a new awakening in Australian journalism. The paper was born at a propitious moment, with the Menzies era coming to an end. An entrenched conservative government, editorially supported by a cosy press oligopoly with very constrained competition, had induced a torpor in Australian political journalism. Now the conservative hegemony was beginning to come under challenge, climaxing in 1972 with the first Labor government in twenty-three years.

A younger, better-educated generation of political journalists was emerging in Canberra, and the new opportunities offered by the Australian (as well as the Canberra Times and the Financial Review) gave Canberra correspondents more leverage with their head offices, produced more vigorous competition in political coverage and, most importantly, gave Australian audiences much better reporting and (more tentatively) analysis of national politics.

The Melbourne and Sydney quality papers, the Age and the Sydney Morning Herald, had tended to be editorially moribund. But the arrival of the Australian helped to spur on the Age to a remarkable period of editorial renewal under the directorship of Ranald McDonald and the editorship of Graham Perkin. While that paper established itself over the decade as Australia’s leading quality paper, the Australian had helped to make its success possible, and at times was itself a close contender for the title.

The Australian’s early troubles were not only commercial but editorial as well. The first editor, Maxwell Newton, a flamboyant economic journalist and would-be political activist, was more a vigorous advocate than an editorial strategist. Within a year he and Murdoch had parted company. Newton’s successor, Walter Kommer, did a competent job on the production side, but it was the next editor, Adrian Deamer, who gave the paper a more vital and central role in the nation’s journalism. While it made strides professionally and in circulation during this period, Murdoch deemed it was not the sort of paper he wanted, and abruptly fired Deamer in 1971. His departure caused great resentment among those close to the paper, but its editorial direction in favour of the election of a Labor government continued.

While it was Murdoch’s commitment that made the Australian possible, and his energy and deep pockets helped to sustain it through its early years, it was also his intervention and influence that often compromised its quality. One of the paper’s early journalists, Mungo MacCallum, used to joke that they were going to have a reunion of its political reporters but found the Melbourne Cricket Ground was already booked that day.

Murdoch’s intervention was most visible, of course, when he campaigned against the Whitlam government in 1975. This brought a sharp circulation decline as well as a loss of credibility among the public and in the profession. During the election campaign, disgusted with what had been done to their papers, News Limited journalists held what is still the only strike over editorial issues ever to disrupt an Australian newspaper. For years afterwards, the Australian had trouble attracting first-rate staff. It only recovered from this self-inflicted professional malaise with the advent of the Hawke government and the appointment of Paul Kelly as its chief political correspondent, and later as editor-in-chief.

OVER THE PAST decade and a half, the paper has again gone into a professional decline, though not as abrupt and obvious as accompanied its outrages in the 1970s. While Murdoch’s political opinions have overwhelmingly been to the right of the political spectrum, and sometimes to the extreme American political right, one of his commercial-cum-editorial strengths in the past was his ability to ride the coming political wave of the day. But now his views – and consequently the company’s internal culture – have solidified into a rigid conservatism. As a result his journalism has been off the pace in the recent lead-ups to changes of government in both Australia and America. His organisations failed to reflect and amplify the public mood as they had done before many other changes of government, their outbursts of anger at the eventual winners only demonstrating their irrelevance.

In Australia, the contradiction is best seen in the Australian’s use of Newspoll. This, the most frequent barometer of public opinion in Australia, must be a significant expense for the Australian, although it has probably been a worthwhile investment because its results bring the paper a large amount of publicity in other media. But in 2007 its reporting of these results made it a psephological laughing stock. It had a great running story – a government heading for defeat – and yet its reporting constantly sought to fudge the story, to find rays of hope for John Howard and to avoid the implications of the evidence for which it had paid so much.

The Australian’s team of journalists lines up pretty well with the other three quality newspapers – the Age, the Sydney Morning Herald and the Financial Review. But the paper is less than the sum of its parts for two principal reasons, and interestingly both go back to observations made by Ken Inglis after the first edition was published 45 years ago. One is a strength that the paper has lost and the other is a weakness that has remained.

Inglis’s greatest praise was for the opinion and features pages. These included the review pages, which have remained strong and interesting, but also the news features and analysis, which he found refreshing and valuable. His strongest criticism was about some carelessness in its reporting and the paper’s tendency to claim exclusives falsely.

The Australian’s news judgements have always been problematic, and the roots of this lie partly in its precarious marketing position. Because it is competing with metropolitan dailies, and a state-based story will probably not be strong enough to sell around the whole country, it tends to highlight Canberra stories, whether justified or not. From the beginning, and to some extent still, it needed to penetrate the market, attract the audience’s attention, so that people would either switch from their established habit of buying their own metropolitan daily or take a second paper. In other words the Australian had to convince potential buyers they were receiving something better and different from the standard fare. When it did this well it added to the richness of the mix of political news. As a standard operating procedure, however, too often it resulted in eccentric news judgements and beat-ups. It also resulted in far more self-congratulation than was warranted.

When mixed with its political partisanship, and its pursuit of its own idiosyncratic campaigns, these news judgements and treatment of stories can detract from its credibility. In his memoirs Peter Costello described his frustrations about such campaigning. In 2005, he wrote, “The Australian newspaper was agitating for larger tax cuts. Journalists wrote story after story on the issue and no amount of explanation could get a fair hearing. The then editor, Michael Stutchbury, was manic on the issue.” According to Costello, as part of this campaign, the Australian invented a “ginger group” of backbenchers who it said were waging a campaign. All this happened when the government had just cut tax for the third year in a row.

To an extent the same combination of influences has detracted from the paper’s opinion pages. From the beginning the Australian devoted more space to opinions and features than the other quality newspapers, and over the years it has attracted many interesting and informed contributors. But again it is often preoccupied with attracting attention, creating sensations, rather than providing analysis. Its regular contributors have a largely predictable hit list – trade unions, government spending, the ABC, teachers, global warming and so on. Many of its columnists parade a tiresome and hollow militancy as they embrace what they like to call the culture wars, and an empirical sloppiness verging on invention in the way they write about elites, political correctness, extremists, and so forth.

Forty-five years on, the commercial uncertainties have gone. Backed by one of the world’s largest media empires, the Australian is as well placed as any newspaper to face the challenges of the internet. But the romance and idealism have also gone. The newspaper is not the breath of fresh air in Australian journalism it once was, and its achievements, while still present every day, are often outweighed by its erratic editorial judgements and tired and unenlightening opinion pages. In both its history and its present performance, the Australian is like the proverbial curate’s egg, good in parts. •

On 15 July 1964, Rupert Murdoch published the first edition of a national daily. In this essay published in Nation later that month, Ken Inglis reviews the new paper 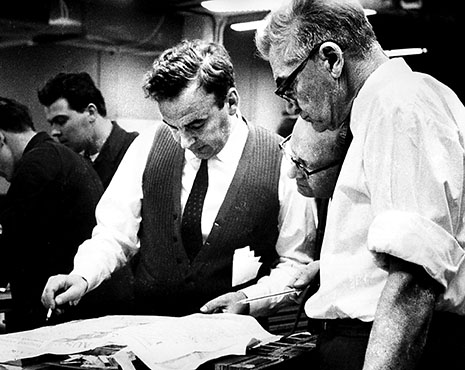