The Beatles at the Beeb

There’s more to the pairing of the Beatles and the BBC Light Programme than might first meet the ear, says Andrew Ford 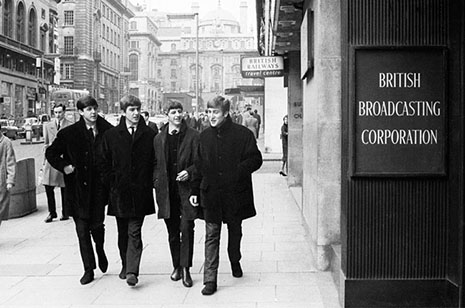 Part of the diet: the Beatles at the BBC in the early 1960s. Apple Core Ltd

IN 1967, as a ten-year-old boy living with his family in a semi-rural village outside London, I was thrilled to learn that Brian Matthew’s home was a bit further up our lane. Ever since I could remember, my dad and I had listened to Matthew’s show Saturday Club on the BBC Light Programme, and so the occasional glimpse of him driving past seemed like a connection to the world of pop music. When he opened our school’s new swimming pool one year, I queued for his autograph.

Saturday Club was how most people in Britain first heard the Beatles. As they released their growing stream of hits, Matthew was among the first to play them. But on numerous occasions they also played live on his show, and listening now to excerpts from these programs and others on the newly released volume two of The Beatles at the BBC, a surprising number of pennies drop regarding the group and their music.

Perhaps the first thing one notices is how good they were live. Generally one learns very little from archival recordings of the Beatles in concert. Either you can’t hear them above the audience’s screams or they can’t hear themselves and so are inclined to sing and play out of tune. But in the BBC’s studios, without competition from thousands of frenzied fans, they played more than 300 songs (some of them repeats) and played them with consummate professionalism and in an easy, relaxed manner born of considerable experience, especially in the clubs of Hamburg.

The harmony singing – one of the things that distinguishes the Beatles in the early 1960s – is always bang in tune, and the playing faultless. Without once showing off, George Harrison demonstrates a seemingly endless range of expressive licks and runs (many of them different from the familiar ones), while Ringo’s drumming – one of the Beatles’ most distinctive sounds – has a surprising range, though the familiar low-tuned tom-toms, especially the prominent floor tom, are much in evidence, and there’s a nice example of his trademark (though never quite smooth enough) hemiolas on “She Loves You.” Really the only audible clue that these are live performances is the occasionally tired-sounding voices of McCartney and Lennon. They sang a lot in those days of touring from 1963 to 1965.

For me the most important aspect of this two-disc release – the aspect that caused the above-mentioned penny dropping – is the sheer range of the music, coupled with the originality of the Beatles’ own material. The clue is in the name of the network – the BBC Light Programme. It wasn’t until September 1967 that the BBC, in response to the popularity of pirate pop radio stations broadcasting from the North Sea, launched its own slightly dowdy equivalent, Radio 1. Prior to that, pop and rock music were just part of the diet – and a small part at that – on a network that played light classics, jazz and dance bands, some country music, a little bit of folk, comedy shows and sports reports. Commercial radio did not exist in Britain until the mid 1970s, and so unless you tuned into the pirates, the Light Programme was where you heard rock & roll. And it is the network’s mixed musical diet that lies behind the Beatles.

You can hear it most readily in the covers, some of which never appeared on the Beatles’ albums. Among the highlights are “Glad All Over” (the Carl Perkins song, not the one the Dave Clark Five had a hit with), given a rockabilly treatment by a band who always had more country in their sound than any comparable British act – their version of Perkins’s “Sure to Fall (in Love with You),” also included here, is pure Nashville. Chuck Berry was always a Beatles hero, their “Roll Over Beethoven” as much a classic as Berry’s original. On this new release there’s an urgent, stripped-down version of “Memphis, Tennessee” sung by a hoarse John Lennon, to a driving, Bo Diddley-style accompaniment of heavy toms and rhythm guitar. It resembles the Rolling Stones’ version of Buddy Holly’s “Not Fade Away”, altogether darker than the original. There’s plenty of raw rock & roll, too, from their familiar Little Richard-inspired medley of “Kansas City” and “Hey-Hey-Hey-Hey!” to Chan Romero’s “Hippy Hippy Shake,” but alongside it is an up-tempo reworking of “Beautiful Dreamer” and an especially sweet rendering of “Till There Was You,” a song from Meredith Willson’s hit musical, The Music Man, that also featured on their 1964 album With the Beatles.

The Beatles were a perfect fit for the Light Programme, because from the beginning their act offered the same variety (perhaps that should have a capital V) that was the network’s staple – even the slightly arch clowning between songs reflects this. But of course the Beatles’ musical influences, as much as their shtick, came in part from the network itself. And the harmonic sophistication and originality that marks their songs from as early as “Please Please Me” and “From Me to You” is the result of this wide listening.

As for Brian Matthew, he is as good as I thought he was when I was ten. Included here are four interviews, one with each Beatle, in which Matthew, the bantering banished, gives his subjects the chance to speak quite seriously on music and life.

It’s always healthy to have a good look at something you loved as a child. And it’s a nice feeling to have your original impressions confirmed. Listening to these discs, I am a Beatles fan all over again. •