The benefits of incumbency 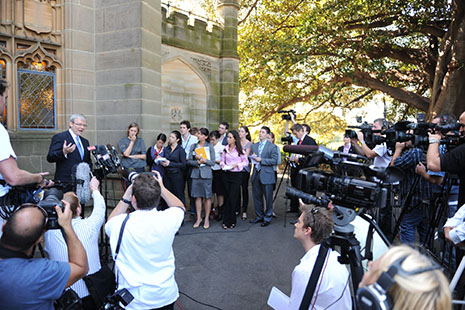 THIS WAS THE WEEK the federal Labor Party lost its swagger. As the tragedy on the boat now known as SIEV 36 played out, a nasty déjà vu returned, along with a haunting question: is Labor fatally estranged from middle Australia on these questions of “values”? Are we back to 2001 and Tampa?

Some commentators are already polishing their eight year old caricatures: captured by inner city elites, the ALP must rediscover its working class soul. Stop sneering at the common folk. Mentions of chardonnay and latte. And a few Coalition players have a discernible spring in their step. But their enthusiasm is premature.

The question the Rudd government hates hearing and refuses to answer – does their “softer” policy on asylum seekers encourage more to aim for our shores? – has a parallel in the Howard years. After John Howard joined the invasion of Iraq in 2003, he and his colleagues went to extraordinary lengths to deny, or avoid addressing, the assertion that their decision had put Australians at greater risk of terrorism.

To both questions the answer must surely be “yes of course – but only a little.” Australia’s ranking on terrorists’ target lists must have been boosted slightly by our involvement in Iraq. And today, while we still have one of the toughest asylum seeker regimes in the world, it is a little less tough than the previous government’s, and so its deterrent effect is likely to be smaller. A bit.

All policies involve compromise and trade-offs, and in both cases global forces are much more important, but on such emotive subjects governments find these tiny admissions unutterable.

Perhaps surprisingly, the latest Newspoll, published in the Australian on Tuesday, revealed no public groundswell for a harsher border security regime. But for all his popularity Kevin Rudd seems politically insecure. Not for him Bob Hawke’s irrepressible optimism about both his own appeal and the innate goodness of the Australian people, nor Paul Keating’s approach of “stuff what the voters think; just make sure you win the next election.” Instead Rudd is rather like Howard: building his public persona day by day, hour by hour, terrified his popularity will dissipate. But the fact that he and his colleagues are obviously scared does not mean they have much to be scared of.

The issue of asylum seekers in 2001 transformed Howard in the eyes of many electors from a forgettable fuddy-duddy into a true national leader. But it is by no means clear that it produced the election result later that year. The opinion polls were steadily narrowing before the Tampa arrived in August, and indeed the July Aston by-election had seen a disappointingly small swing to Labor. The Coalition had almost lost the 1998 GST election, but by 2001 the tax had been introduced. And although the 2001 result was a comfortable win for Howard, it was not the “landslide” it was often made out to be.

Recall further back, in 1988, during Howard’s first stint as opposition leader, when his policy to slow down Asian immigration policy failed dismally and contributed to his replacement as leader. Remember also his successor, Andrew Peacock, attempting to capitalise on anti-Japanese feeling by promising to block the Multi-Function Polis. These campaigns were unsuccessful largely because they were attempted from opposition. In 2001 the Liberal Party was in office, but that’s not the case in 2009.

There are the tangible benefits of incumbency, including armies of public servants, the power to make policy and financial resources. But being in government also bears intangible fruits: the dignity inherent in the highest office in the land and the ability to change events and control the news cycle.

Imagine a leader of the opposition fulminating that he “doesn’t want people of that type coming into this country” as Howard did several times during the children overboard affair. Or one that came up with the “Pacific solution.” They would look desperate, grubby and demented, even though their basic sentiment was resonating with many voters. But PMs can behave unconventionally at times precisely because they possess the gravitas of office.

This is why when the strategists behind the Liberal’s 2001 campaign, Lynton Crosby and Mark Textor, took similar tactics to Britain in 2005 and New Zealand in 2006 they failed: because their messages were being sold from opposition.

Malcolm Turnbull is probably the last person to want to take up the asylum seeker debate, but his position in the party is now so weak that all he can do is follow the script. As he is finding, however, his avenues are limited. What looks like a circuit breaker this week is usually destined to wrap next week’s fish and chips.

There are no quick fixes in politics, and unless Rudd overreacts, no amount of boat people will save the federal Coalition. •

Peter Brent, a researcher at the Australian National University, is editor of Mumble.