The prime minister was angry. So what did he say? asks Jock Given 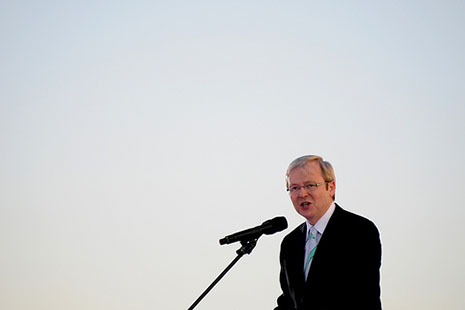 David Marr would not have been Kevin Rudd’s first choice for a biographer when he turned up early in 2010 with a Quarterly Essay to write.

If the PM had read Marr’s The High Price of Heaven, published a decade ago, he’d have found out exactly what Marr thought of the God-bothering prime minister at the time, John Howard. Marr describes his own teenage years, spent between taking Christ into his life “on a dark night on the shores of Port Hacking in the summer of 1960” and ditching his faith during an exam at Sydney University half a decade later, while trying to answer the question, “Reconcile the propositions that God is both all powerful and all good.”

He says he “got out the other side with most of myself intact. But it’s left me unable to forgive those Christians who are still at work, inflicting misery on kids… The enemies of films and books and magazines, of sex and music and drugs and television, of drink and dancing are Christians.” Discovering politics by the age of eighteen, Marr found the world “full of disasters God couldn’t fix.”

Or he could have read The Henson Case, published in 2008, and found out what Marr thought of the Kevin Rudd who had been prime minister for just six months when police raided an exhibition of Bill Henson’s photographs in Sydney. “I have a very deep view of this,” Rudd told Karl Stefanovic on Channel Nine’s Today. “For God’s sake, let’s just allow kids to be kids.” Henson’s images, he said, were “absolutely revolting.” With these words, Marr says, the new prime minister “killed Camelot.”

But Rudd gave the Quarterly Essay, as he might say himself, a red-hot go. The same Kevin Rudd who picked himself up after failing to win the federal seat of Griffith at his first attempt in 1996, methodically acquiring new skills to get people to vote for him, went to work on the unsolicited biographer. He invited Marr to spend some hours with him in Mackay.

This trip is recounted in the essay. The prime minister and the biographer walk and talk, then eat together. As dinner is wrapping up, “almost as he is leaving the table,” the PM asks the biographer what he is going to write – “the argument of the essay.”

Marr tells him. The PM blows up. Marr thinks, “I have hurt him and he is angry.” For the biographer, it’s an epiphany. He’s been tracking the prime minister for a few months, but this moment apparently nails the character he has been trying to grasp. “Face to face, it’s so clear. Rudd is driven by anger. It’s the juice in the machine. He’s a hard man to read because the anger is hidden by a public face, a diplomat’s face. Who is the real Kevin Rudd? He is the man you see when the anger vents.”

It’s the Rosebud that Orson Welles warned biographers about in Citizen Kane. “Rosebud” is the newspaper tycoon Kane’s last word. Newspaper story-hounds are dispatched to find out why he said it. Last words must mean something important, perhaps everything, about a life. Get to them, understand them, and you have the real person, the essence. The story-hounds never find out anything about “Rosebud,” though the viewer sees it burning in Kane’s mansion as the movie ends. Rosebud turns out to be nothing much at all in the life of the man, though Welles made it everything in the story of the life of the man.

Welles’s co-screenwriter Herman J. Mankiewicz didn’t like William Randolph Hearst, on whose life the film is based. Marr has been here, writing a biography of someone he didn’t much like, Garfield Barwick. The former High Court chief justice provided advice to opposition leader Malcolm Fraser about the legality of dismissing Prime Minister Gough Whitlam in 1975, a matter that might have ended up in a case requiring consideration by Barwick’s court. One problem with writing about someone like this is that you can put your readers off too. Citizen Kane shows it needn’t stop memorable portraits emerging (Mankiewicz had Welles and the elasticity of fiction to help). Power Trip, Marr’s Quarterly Essay, is heading best-seller lists this week.

But David Marr’s Rosebud is an odd thing. Did the biographer really have an epiphany at the dinner table in Mackay, like the ones he’d had at Port Hacking and the university exam room? It’s a marvellous moment, but to this reader it doesn’t feel like an epiphany about Rudd at all but about biography.

Normally, with books, this moment happens in secret, when the subject reads the manuscript. The Murder is not always fatal or even painful. The subject can be happy or flattered, puzzled, depressed, angry, accepting. But there is time to prepare to face The Journalist. The makers and subjects of bio-pics and plays don’t get this time. They usually have to speak, confront each other, the moment the lights come up.

Occasionally, books do give us these moments. Marr has been here before too. In a note to his magnificent biography of Patrick White, the scene is described to us. The aging White has been waiting and waiting for The Journalist to finish his project. Finally, it is ready. The subject reads it, then asks Marr to sit with him while they read it through a second time. This takes nine days. White corrects spelling mistakes in four languages, identifies twenty-five errors of detail, none substantial, and, according to a later interview with Marr, says “Thank you.”

It is an exquisite rendering of the relationship between this subject and this biographer. Marr is both in the scene, waiting for judgement on six years of his own work and life, and observing it on our behalf. Is this a joint enterprise or is White, The Monster of All Time, going to rise up to monster the murderer? White tells Marr “he found the book so painful he often found himself reading through tears.” But he does not ask the biographer to cut or change a line. White picked this journalist and accepts his work.

Rudd didn’t and doesn’t. This time, awaiting judgement, Marr is not just in the scene, he’s driving it. “I have hurt him and he is angry.” But then suddenly, the biographer is back with us readers, behind the one-way glass, describing the scene. A table to be cleared and an angry man. Why is he angry? The reason has changed. Like an air-crash investigator, the biographer has just located the black box of Kevin Rudd’s life. The PM is angry because he’s an angry man. It’s his Rosebud.

It may not be the black-box, but this scene still provides an intriguing box-full of information about the PM. By this stage of the essay, the reader has learned how hard Rudd tried with an unsolicited biographer who thought the PM had “killed Camelot” two years earlier. We now learn that the PM failed and was very, very angry when he realised he had failed. Perhaps it was a busy PM angry that he had wasted his time. Perhaps he suspected the biographer had made up his mind before he came to Mackay, that the trip had been about harvesting colour to flesh out the argument and keep the narrative scooting along, rather than a listening tour. Perhaps, as he said during and after the Copenhagen climate change summit, he felt the “fucker” had “rat-fucked” him. We learn that rather than making light of the moment, Rudd chose to take it on, surely realising this would supply an irresistible image for the essay. We learn that the PM can get really really mad without losing it.

What we don’t learn is what he actually said. The biographer can’t tell us because he has agreed that the moment is off the record. But, Marr tells us, “What he says in these angry twenty minutes informs every corner of this essay.” He also tells us that for these twenty minutes, Rudd is “astonishingly eloquent.” So what did he say? Clearly not “thank you” and probably not “Rosebud.” The reader gets the PM’s anger and the hypothesis about its source, but no words.

Lives are full of snap decisions, actions and events occurring in an instant that have deep and long-lasting consequences, last straws that end all hope, decisive words and deeds that convince us that something or someone matters. But moments, especially moments of anger, that reveal everything about a person, “the juice in the machine”? These things happen in stories more often than in lives, even biographers’ lives. It’s why we love them. •

Jock Given is the author of Turning Off the Television: Broadcasting’s Uncertain Future and professor of media and communications at Swinburne University’s Institute for Social Research.

Have the wrong kind of people – men – wielded too much power in New South Wales, asks Tony Smith 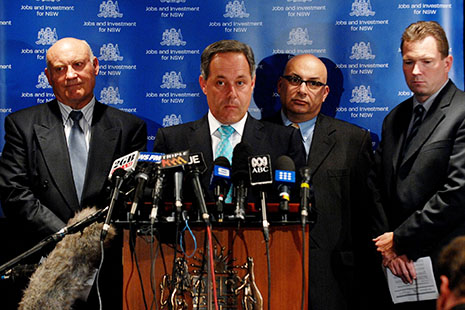