China’s Five Year Plan could turn out to be a turning point for global climate policy, writes Michael Jacobs 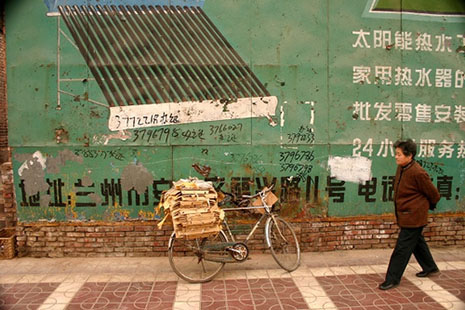 IN MATTERS of climate change, China’s role tends to overwhelm all else. Although it isn’t responsible for the problem the world now faces — its cumulative contribution to atmospheric greenhouse gases is dwarfed by those of Europe, the United States and Russia, which began their industrialisation far earlier — China’s future emissions will play the largest single role in determining the future of the planet.

With one sixth of the world’s population and an economy doubling in size every seven to ten years, the sheer scale of China’s industrial expansion makes this mathematically inevitable. China has already overtaken the United States as the world’s biggest polluter. Now, it generates around a fifth of global emissions, or around 9 gigatonnes (Gt) of carbon dioxide equivalent per annum. If the rate at which it produces greenhouse gases per unit of economic output remains unchanged, this will rise to 30–35 Gt by 2030 — which would equal the entire amount the world would be able to emit under a global “carbon budget” aiming to hold average temperature rises to the goal of 2 degrees Celsius. In other words, unless China’s carbon economy undergoes a dramatic transformation over the next two decades, its growth will make devastating global climate change inevitable — whatever any other country does to reduce its emissions.

So the recent publication of China’s twelfth Five Year Plan, mapping out its development priorities for the period 2011–15, is not just of local concern. The plan contains a detailed account of how China will reduce its impact on the global climate, which makes it a critical document for all of us.

Five Year Plans constitute the cornerstone of China’s state-directed system. As the coordinating framework for economic and social development policy, they give rise to a series of sub-plans and targets cascading down from central government to provincial and local levels. The careers of Communist Party officials depend on achieving those targets, so they really do matter. And those in the twelfth Five Year Plan, unveiled by Premier Wen Jiabao and formally approved by China’s National People’s Congress in March, are rather remarkable.

At the heart of the plan is the aim to achieve a more “balanced” development path, slowing China’s economic growth rate to 7 per cent a year (compared with the double-digit growth of the last three decades), and shifting economic activity away from reliance on investment in low-wage manufacturing exports towards greater domestic consumption, higher value-added industries and a larger service sector. China’s leaders have accepted that China needs more than just rising national income if the growing aspirations of its people are to be satisfied: higher living standards and better public services are now primary goals. And alongside them, the plan makes “low-carbon development” a national priority for the first time.

A third of the new primary targets set out in the plan are environmental, reflecting concern not just about global climate change, but also about widespread local air and water pollution, continued loss of biodiversity and China’s energy security (China is 80 per cent dependent on imported oil, and recently became a net importer of coal). Key pollutants are to be cut by 8–10 per cent in the next five years, forest cover increased to over 21 per cent, and energy intensity (the amount of energy used per unit of output) cut by 17 per cent. But the most significant target is to reduce the carbon intensity of the economy — emissions per unit of output — by a binding 16 per cent. This constitutes the first stage of China’s commitment, which it made at the Copenhagen climate conference in 2009 and confirmed in the UN Cancun Agreements last year, to cut its carbon intensity to 40–45 per cent below 2005 levels by 2020.

Even at its new, lower growth rate the Chinese economy is likely to expand by close to a half in the next five years, so a 16 per cent reduction in carbon intensity does not mean that China’s emissions will stop growing. They will continue to rise in absolute terms. But the target represents a reduction of up to 2.5 Gt in emissions by 2020, which is a considerable slowing down over what would have happened under business as usual, depending on how existing trends are calculated. Globally, this is very significant. To put it in context, the European Union’s 20 per cent absolute reduction target equates to around 0.5 Gt. If a comparable improvement is made after 2020, China’s emissions by 2030 would be in the range of 14–15 Gt per year: under half of its currently projected total. This is a very substantial contribution to the global effort.

The plan sets out how it is to be achieved. The centrepiece is a huge expansion of investment in low-carbon energy technologies, which are planned to meet over 11 per cent of primary energy demand by 2015, including a third of China’s power generation capacity. Befitting China’s size, the figures are staggering: nuclear power is set to grow fourfold (to 43 gigawatts, or around twenty-five new nuclear reactors in the next five years), wind generation will more than double to 100 gigawatts, hydro will increase 40 per cent to 284 gigawatts, and there will be additional increases for natural gas and solar as well as huge rises in investment in transmission lines and “smart grid” infrastructure. This is not a wholesale conversion to a low-carbon energy economy — coal-fired power generation is due to expand in the same period by an estimated 260 gigawatts, more than all the low-carbon technologies put together — but it remains a significant move in that direction. It will push China ahead of the European Union as the world’s largest investor in, and market for, low-carbon energy. The plan also aims for a 30 per cent improvement in the average emissions of new vehicles, a million electric and hybrid vehicles on China’s roads by 2015, and a US$500 bilion investment in the country’s high-speed rail network, taking this to more than 16,000 kilometres.

Perhaps even more remarkable is the accompanying industrial policy. The Five Year Plan identifies seven “strategic industries” on which China will concentrate investment. Of these, three — alternative energy, alternative-fuel cars, and energy saving and environmental protection — are the key sectors of the low-carbon economy, while all the others — biotechnology, advanced materials, high-end equipment manufacturing and information technology — will make a critical contribution. At the same time, research and development spending is to rise to over 2 per cent of GDP, taking it to more than US$750 billion by 2015. There is no question what this means: the Chinese leadership intends the country to become the global market leader in what it predicts will be the green technologies of the future.

But this is only a plan, it might be argued; will it actually happen? Recent Five Year Plans in fact have a pretty good record of being implemented. The last one set a 20 per cent target for improving energy intensity, for example; a little over 19 per cent was achieved. The methods were not always very efficient: a lot of old power and industrial plants were simply closed down, while in some areas power cuts were imposed to meet the targets. There is evidence of statistical manipulation by some local governments as well. But here, too, the new plan is making changes. It proposes the use of more market-based mechanisms to achieve its goals, including reforms to energy prices, carbon offsetting, payments for environmental services, and even the piloting of emissions trading schemes in selected provinces. Bizarre though it sounds, it is now quite possible that China will introduce a national emissions trading scheme before the United States. At the same time, new “low-carbon zones” in eight cities and five provinces (with a total population of 300 million) will be encouraged to pilot innovative policies and measures.

Most analysts are in fact pretty confident that China will meet the new plan’s targets. Since Premier Wen indicated in Copenhagen that China might even exceed the 40–45 per cent carbon intensity target, a lively debate has taken place within Chinese academic circles over whether the plan goes far and fast enough. There is certainly no room for complacency: if overall global emissions are to be held to the 2C path then China, like other leading emitters, will have to do more by 2020, not just 2030.

AS IT is implemented, the new plan is likely to change the dynamic of the climate negotiations. On the global stage, China has been a deeply conservative player, insistent on its developing country status, resisting external scrutiny of its actions, and refusing point blank to make its commitments binding in law. (It was only in the very endgame at Copenhagen that it even conceded it should register its policies ly; it still insists that they are voluntary, and not formally part of an agreement.) This has left China open to attack in the West — particularly in the United States, where China’s industrial growth and balance of payments surplus has made it a popular scapegoat for American economic ills.

But there are signs that China’s position is changing. Stung by the criticism it received for its obstructive stance at Copenhagen, China was a notably emollient player in the negotiations at Cancun. It has already acknowledged that, unlike other developing countries, it does not need and should not receive climate assistance; on the contrary, it has been pointing out that it now lends more to the developing world than the World Bank does. Perhaps most of all, as the Five Year Plan is implemented over the coming years it will be more difficult for China’s opponents to excuse their own inaction by claiming that China is not pulling its weight.

On the contrary, a reverse dynamic may well develop. As one European analyst put it, surveying the plans for huge investment in clean-energy technologies, China has now taken “an expensive bet on a low-carbon future.” That bet gives China a major stake in low-carbon policies in other countries, which will provide the markets for its new green industries. In turn, this could make China much less defensive in negotiations and prompt it to use its own commitments to press more on others while having the confidence to permit greater scrutiny of its own policies. At the same time, many other industrialised countries will be fearful of Chinese dominance in these markets, and as a consequence are likely to stimulate investment in their own green industries. In Europe, certainly, that argument is now making headway — and in due course, it could yet do so in the United States.

So China’s new Five Year Plan may turn out to mark a decisive moment in global climate policy. Admittedly, it’s a far cry from the ideals of ecological harmony and social change that drove the early environmental movement. Central planning under the Chinese Communist Party was not how people envisaged the planet being saved. But it’s not too far-fetched to argue that, to an extent greater than many in the West would wish, it is precisely on this that the fate of the earth now rests. •

Michael Jacobs is a Visiting Professor in the Grantham Research Institute on Climate Change and the Environment at the London School of Economics. He was Special Adviser to former British Prime Minister Gordon Brown from 2004 to 2010. He writes each month about climate change for Inside Story.