The correspondent who saw too much

It was “harder to get into Fleet Street than to rob the bank of England,” wrote journalist Lorraine Summ. But she went on to publish one of the Pacific war’s great scoops 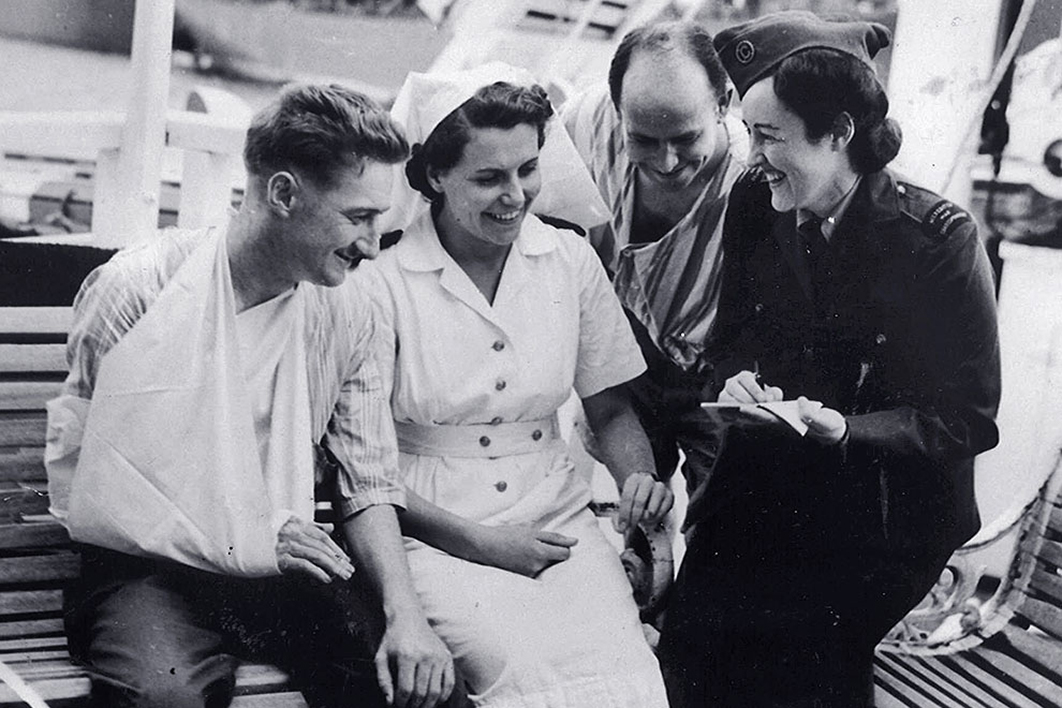 The war had been over for a matter of days when Australia’s first female accredited war correspondent, Lorraine Stumm, filed her world scoop. She had tracked down and interviewed the first known Western survivor of the atomic bomb at Hiroshima, a blast that would put an end to the long and savage conflict in the Pacific and change the world forever.

Stumm, who flew over Hiroshima with a group of correspondents, later wrote of the experience: “The usual journalists’ banter in the aircraft stopped as we neared the city, we were all so silent. I will never forget what it was like. I had expected rubble and the devastation, but nothing prepared me for the piles of bodies, clearly recognisable, and the bitter desolation of a once prosperous community. This [silence] continued even when we touched down. No one said a word.”

But it was her interview with Father Wilhelm Kleinsorge as he lay in his hospital bed suffering from radiation poisoning that gave her readers the first real insight into what had taken place.

“Father Kleinsorge described walking barefoot through devastated Hiroshima for hours after the bombing,” Stumm filed. He had been reading at his presbytery, just 500 metres from ground zero, when he saw a flash. “I don’t remember hearing any explosion or how I came from the second floor to the ground floor, but when I did, I found that our house was the only one left standing as far as I could see,” Stumm quoted Kleinsorge as saying:

It was black as night. Six people, four brother priests, one student and one servant collected together, and we dug out the wife and daughter of the caretaker from under the wreckage. Fires had broken out all over Hiroshima. They raged at us from every direction. We had small splinter-like wounds all over our bodies. In the afternoon a whirlwind sprang up which made the sky pitch black and drove many people into the river, where they drowned. People were wandering about with their whole faces one large blister from the searing effect of the bomb. Only forty out of six hundred schoolgirls at the Methodist college survived; three hundred little girls at the government school were killed instantly. Thousands of young soldiers in training at barracks were slaughtered. I walked for two hours and only saw two hundred people alive.

“Two days after the bombing,” Stumm reported, “Japanese military forces entered Hiroshima and collected 200,000 bodies for cremation. In addition to those killed outright, many more died through lack of medical attention as every hospital had been destroyed.”

With a bachelor of arts, a diploma of journalism and some casual sports reporting experience at the Brisbane Telegraph under her belt, Stumm had followed her boyfriend, Harley, to London, where he was training to become a Royal Airforce pilot and she aimed to be a reporter.

But it was “harder to get into Fleet Street than to rob the bank of England,” as she would later write in her autobiography, I Saw Too Much. So, in 1936, she “crashed in” to the night editor’s office at the Daily Mirror and plied him with a judicious mix of charm, truth and falsehood.

“He asked me, can you do interviews? Never having done such a thing in my life, I promptly replied, yes.” To her amazement, he gave her a month’s trial, which would end up taking her across the world to cover the story of the century:

I was as green as grass for I’d never known what real work was like until I joined the Daily Mirror. However, it didn’t take long to realise that my job was one that demanded the qualifications of a Scotland Yard sleuth, combined with the acumen of an astute lawyer and the bright ideas of a crack advertising agency.

In the beginning I had no technical knowledge of how a newspaper operated. What I did have, I quickly discovered, was an instinctive news sense, something I believe you cannot learn: you either have it, or you don’t. In some instinctual way, I could scent, or feel my way into an important interview or recognise a good angle for a story.

And her angle was firmly tabloid. She covered crime, securing her first scoop by stalking a pathologist, charmed the leading tenor of the day into the bath to sing for a photo, interviewed movie stars like Robert Taylor and authors like George Bernard Shaw, and tailed Princesses Elizabeth and Margaret through the zoo at Regent’s Park.

When war broke out, Stumm followed Harley, now her husband, to Singapore and quickly found a job on the Malaya Tribune as a general reporter, bringing a “dash of Fleet Street” to Southeast Asia — so much so that her first story defamed the governor, almost getting her deported. Then, after the birth of her baby and the Japanese shelling of Singapore, she received a cable. It was her old editor at the Mirror. “Delighted to know you are safe. Can you become our accredited war correspondent and start filing stories immediately?”

Stumm became known as “that war correspondent with a baby.” Tiny Sheridan waited outside press conferences with her amah while her mother covered the refusal of authorities to believe that Singapore was vulnerable to Japanese attack. But Singapore did fall, and Stumm was forced back home to Brisbane, where she received another cable from the Daily Mirror: “All delighted you are safe. Can you represent us at General MacArthur’s HQ in Brisbane?”

The US general was the Supreme Allied Commander South-West Pacific Area, and Brisbane seethed with hundreds of thousands of serving US and Australian men and women. It was a city of sandbags, brown-outs and bomb shelters.

Stumm wore an Australian army officer’s uniform and the flat, broad brimmed Australian women’s army hat, all of which she felt was far from flattering. The American brass, complaining the hat made her look like a squashed tomato, gave her a US officers’ side cap, which she wore with flair. The quality of her reporting brought her to the notice of MacArthur, who included her in an otherwise all-male reporting pack sent to Port Moresby to cover the battle against Japanese forces.

“Here at this forward area, the atmosphere tinges with excitement and grim preparedness,” she filed. “Rugged Australian soldiers load trucks, dig roads, heave fence poles, their mahogany backs bent to the job, their Digger hats stained with the perspiration that pours off them in this humid land. Side by side with them work the Doughboys, more conventional in their fatigue suits with rolled-down sleeves, some even in khakis with ties neatly tucked in at the neck.”

She worked alongside George Johnston, who would cover the war in China and go on to become one of Australia’s most important novelists, and Ian Morrison, the war correspondent son of Australian George Morrison, who had covered the 1900 Boxer Rebellion in China for the London Times. Like most of the men, she operated out of the local command post, covering stories that she couldn’t see first-hand, like the Battle of Kaiapit that saw Australian soldiers defeat a much larger force of Japanese with few losses and establish an airstrip to protect the northern coastal town of Lae.

“The country around Port Moresby was so bad it was a wonder to me that troops could fight in such difficult terrain,” she would write later:

The jeep track leading to the Kokoda Track was so rough it was a misery to ride along. But even here, Australian humour came to the fore. At the start of the Kokoda Track, a huge banner was stretched across the track which read: “Through these portals pass the best damn mosquito bait in the world.” On the other side to welcome the returning troops was written: “We told you so!”

Stumm covered the work of nurses, impressed with their courage and the hardships they faced. “Into Moresby by plane usually come the wounded from land and sea battles. Twenty-four hours a day the girls of Moresby, Australian and American, are on the job, taking care of them,” she filed. She would later interview a group of nurses freed from Japanese captivity, who, fearing pack rape, had kept vials of morphine, ready to kill themselves.

“Even though I’d been through air raids in Singapore, New Guinea was a shock,” she wrote later. “I remember walking down a dusty track, feeling dazed by the heat and the noise, when coming towards me was a war correspondent colleague, George Johnston. He asked me how it was all going. ‘It’s all a bit overwhelming, suddenly finding myself in the theatre of war.’ He nodded sympathetically. ‘I know. It’s a case of I saw too much.’”

As the war was ending, Stumm took a job on the Daily Telegraph in Sydney. But there was one last cable to come from the Daily Mirror, this time asking her to go to Tokyo to cover the Japanese surrender. In a story that would be repeated for women correspondents for decades to come, the editor of the Daily Telegraph only agreed to let her go if she made her own way there. With no civilian flights available, Stumm called on her air force connections, who helped her in memory of her husband, Wing Commander Harley Stumm, who had been killed in action.

After the war, MacArthur awarded Stumm the Asiatic Pacific Service Star for her services as a war correspondent in New Guinea. •

This is an edited extract from Through Her Eyes: Australia’s Women Correspondents from Hiroshima to Ukraine, edited by Melissa Roberts and Trevor Watson, published by Hardie Grant Books.

Melissa Roberts covered China for Time Magazine, the Christian Science Monitor and the Daily Mail as a freelance journalist from 1988 to 1990, covering the chaotic years around the Tiananmen Square uprising. She has worked as a staff correspondent for the Australian, reported on federal politics from the press gallery, and covered Singapore and Australia for Newsweek.