The death of satire?

Is the pen no longer mightier than the sword? 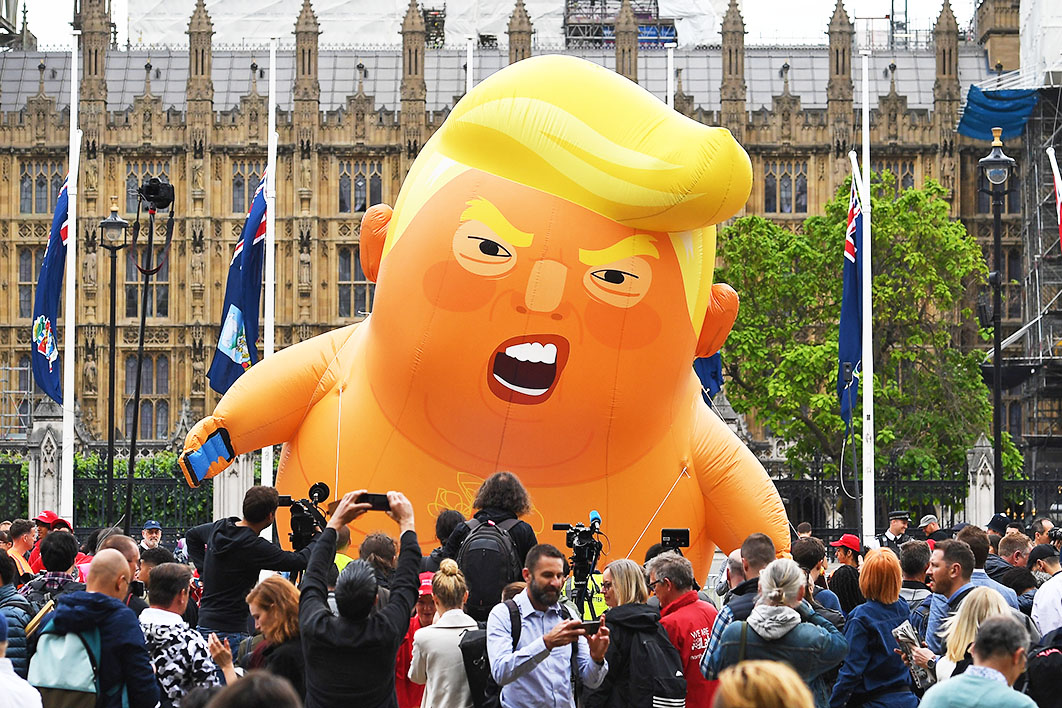 Placebo effect? A Trump blimp rises from London’s Parliament Square during a protest against the US president’s visit to Britain in June 2019. Andy Rain/EPA

American satirist Jon Stewart made headlines during the 2016 presidential campaign when he called Donald Trump a “man-baby.” The image of a bloated old man wearing nothing but a nappy, mouth distorted by a tantrum, was given consummate expression two years later when a monstrous baby blimp was floated over central London by crowds protesting at Trump’s visit.

Surely satire had done its worst? That benchmark seemed to have been acknow-ledged by the Museum of London when it acquired the balloon as a permanent exhibit in early 2021. And yet, as Flinders University’s Robert Phiddian comments Satire and the Public Emotions, Trump came out of it relatively unscathed.

Since Trump had at that point displayed a capacity to come out of just about anything unscathed, this may not in itself be especially remarkable. But, as Phiddian shows, satire has long been regarded as the most lethal weapon in the armoury of writers, artists and performers. If it proved ineffective at that critical juncture, is the pen no longer mightier than the sword?

To try to work out what satire actually does, as distinct from what satirists think it does, Phiddian focuses on the balance between cathartic gratification and strategic impact on the battlefield of politics. Satire, which purports to weaponise the CAD triad against a hated public figure to deliver a lethal (if virtual) assault, more often seems only to offer a placebo effect. It is thus “not exactly the opposable thumb of public discourse,” says Phiddian, though its appeal may depend on convincing an audience that it is.

If Trump’s term as president was the acid test of satire’s impact — a test it seemed to fail — then we have to ask why audiences returned night after night to Stephen Colbert, Trevor Noah, John Oliver, Samantha Bee and Seth Meyers for the latest excoriating tirade against him. Surely not just because it made them feel better. They must have been expecting some decisive moment to be reached, a turning point in public outrage.

But such a shift can occur only if the satirists win the contest of public opinion, and win it so decisively that the outrage translates into votes, or triggers a sweeping change in the zeitgeist. In the current environment, the only person who could really claim to have done that is Greta Thunberg. Thunberg cut through by speaking with the candour of a child, in stark contrast to the sophistries of a satirical tradition that harks back to the eighteenth century.

Robert Phiddian devotes much of his book to an account of key players in that tradition, the eighteenth-century satirists Alexander Pope, Jonathan Swift, Daniel Defoe and John Gay, who left us with some ringing phrases and indelible images. In his Satires (1738) Pope celebrated anger as a “sacred weapon” and gave vent to a moral wrath he claimed was driven only by “the strong antipathy of good to bad.” In The Beggar’s Opera (1728) Gay reversed the social world on stage to make heroes of “thieves and whores.” Defoe foreshadowed Orwell in The Shortest Way with Dissenters (1702), a pamphlet that disguised bitter mockery with animal parables.

Swift, going a step further than Pope, added the corrosive elements of anger and disgust to moral wrath and had the words saeva indignatio (savage indignation) engraved on his tomb. It is perhaps these emotions, more than anything expressed by his contemporaries, that are central to current political satire.

Contempt, anger and disgust converge in the savage indignation fuelling portrayals of Trump as a howling baby or Boris Johnson as a straw-haired buffoon mouthing gibberish from the stores of knowledge he acquired during his much-vaunted classical education. Scott Morrison joined the cartoonists’ company in Hawaiian shirt and flower crown, smiling like a loon as Australia burned in the black summer of 2019–20.

Financial Review cartoonist David Rowe pushes the boundaries of contempt and disgust, depicting Trump as a monstrous heap of pink blubber, a fusion of Jabba the Hutt and the emperor with no clothes. Other potentates drawn into Trump’s orbit take on the same guise of naked obesity, becoming figures of visceral hate.

With his focus primarily on the literary heritage of satire, Phiddian doesn’t comment at any length on visual manifestations. But it is here that some of his key questions are most graphically at issue. Rowe, in company with English cartoonists Gerald Scarfe and Martin Rowson, unleashes the savagery of indignation to a point where the boundary between satire and vilification dissolves.

There is always morality in their wrath. The repugnant personae they conjure on the page are a means of giving form to the offences against human value and dignity committed by the worst political leaders. But anger so highly charged with contempt and disgust becomes hatred, bearing its own moral hazards.

As Phiddian points out, “satirical disgust has no reliable moral compass.” He sees contempt as belonging to a “cooler” register, but rightly warns against its dangers. When expressed in caricatures foregrounding racial or gender characteristics, it is toxic. He discusses at some length philosopher Martha Nussbaum’s condemnation of the CAD triad as an emotional phenomenon vested in “a fruitless focus on magical ideas of payback.”

Such a view would ultimately put satire out of business as a moral enterprise, and Phiddian argues that greater licence is called for in the passion-infused politics of the twenty-first century. But hasn’t satire always claimed a greater licence? Isn’t that exactly what Swift did with his coinage of “savage indignation”?

Nussbaum’s views are an important check on the licence of satire, but as a moral philosopher she misses the entertainment factor. From Aristophanes onwards, satirists have been sought-after dramatists, poets, comedians, cartoonists, singers and impersonators.

Important as it is to deal with the theoretical aspects of satire as a tradition in entertainment, its effectiveness in moral crusades can’t be judged in the abstract. It’s all about the examples, and the media environment in which they are generated.

Take the case of Tina Fey’s impersonations of Sarah Palin during the 2008 presidential election campaign, which Phiddian cites as one of the few instances in which satire can be said to have brought about a political downfall. Here, though, the idea of payback proved not merely magical. In his documentary The Undefeated (2011), Steve Bannon celebrated Palin as the harbinger of a new and revolutionary influence in American politics. The payback for her defeat was the rise of Donald Trump.

As for Trump’s own defeat in 2020, it remains to be seen whether the payback campaign over the “stolen election” will come to anything. But Trump is working on it, with a groundswell of supporters capable of returning any moral outrage directed at him with a vengeance of their own.

As the satirists’ treatment of Trump shows, the triad’s three components don’t appear in an equal mix: changing political climates bring one or another element to the fore. Contempt is riding high at the moment. Tinged with arrogance and associated with moral grandstanding, it is surely the most likely of the three to generate a backlash.

It also has the best entertainment value. With season three of Succession just commencing, we can expect a continuation of the carnival of interpersonal contempt that has made this one of the most popular and highly regarded series of recent years. Each member of tycoon Logan Roy’s gladiatorial family operates under an apparent conviction that contempt is the ultimate weapon of both attack and defence.

As they roll from one bruising debacle to another, though, lethal consequences elude them. It seems like an endorsement of Phiddian’s thesis: satire can’t deliver consequences. What’s funny is that we keep upping the ante, under the delusion that it will. • 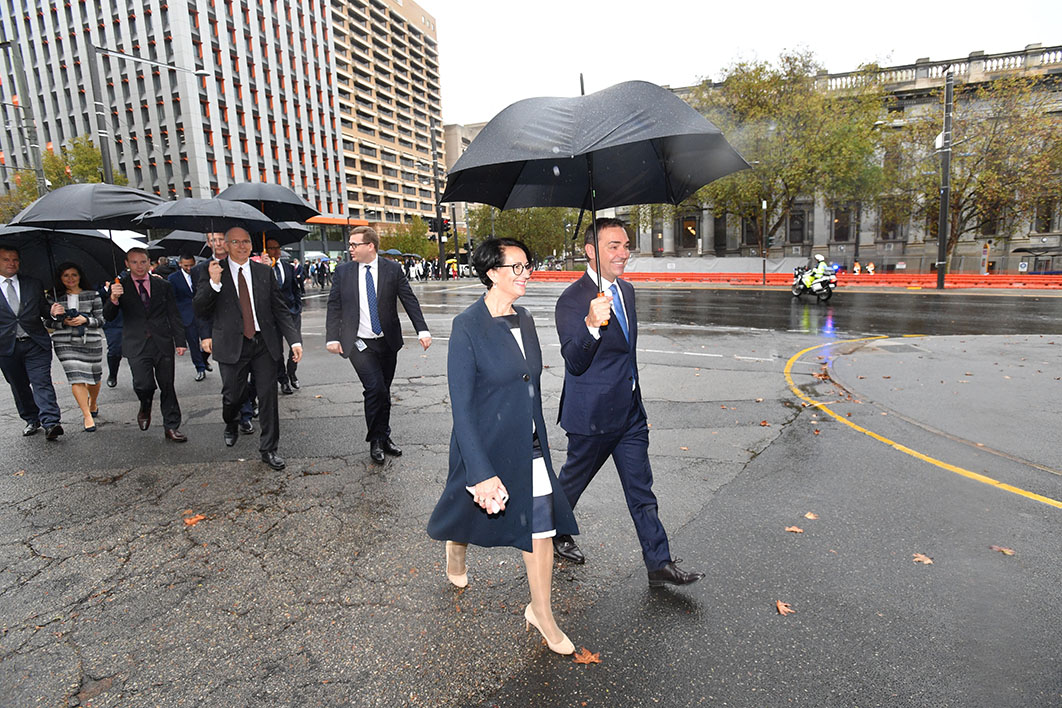