Attitudes to people with disabilities are changing in Britain, but the progress is uneven, writes Frank Bongiorno in London 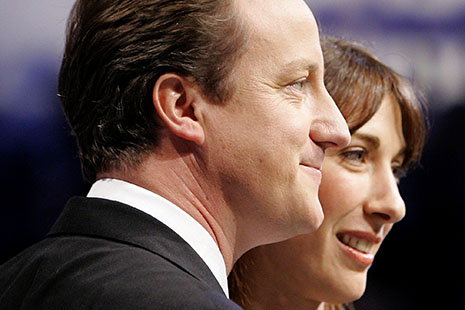 IN THE EARLY HOURS of 25 February this year, six-year old Ivan Cameron died in St Mary’s Hospital, Paddington, London, after a massive seizure. Ivan had suffered from cerebral palsy and a rare and severe form of epilepsy called Ohtahara syndrome. His mother and father, like the parents of so many other children with profound disabilities, had suffered shock and sadness on first learning of their son’s illness not long after he was born. Now, there was the overwhelming grief of losing a deeply loved child. In between, the Camerons had spent anxious nights sleeping in hospitals by his bedside, met who knows how many doctors, specialists, consultants, nurses and social workers, and talked with other parents coping with similar circumstances. All the while they knew that their cherished child’s life was destined to be short – that any week, any day, might be his last.

They read to him Maurice Sendak’s classic Where the Wild Things Are. Anyone who has enjoyed this beautiful and haunting book with a young child will find it easy to imagine the boy’s pleasure in the adventures of the wolf-suited Max among the Wild Things. Max, it will be recalled, is sent to bed by his mother without his supper for being naughty. (Your average children’s picture book mother was a stricter disciplinarian in 1963 than her modern counterpart.) Soon, in Max’s bedroom, and in the even more intimate room of his imagination, a great forest grows. Max goes on an exciting adventure across the seas that brings him into the presence of the Wild Things. These monsters, who seem rather frightening at first but are a pushover once brave Max stares them down, eventually proclaim him “the King of all Wild Things” and beg him to stay. But feeling lonely he decides he must return home. His dinner, still hot, is waiting for him.

The Camerons also made sure that when their son returned from among the Wild Things – and he had more than his fair share of those to deal with – he would be protected by his family’s love. The book was read at Ivan’s funeral.

Ivan was the eldest son of the Conservative leader, David Cameron, and his wife, Samantha. Cameron had been in parliament just a year when Ivan was born. Like many parents in these circumstances, they must have been afraid of being unable to cope, but ended by wondering they could go on without their boy. As David Cameron put it in his first public statement about Ivan’s death:

When we were first told the extent of Ivan's disability I thought that we would suffer having to care for him, but at least he would benefit from our care. Now as I look back I see that it was all the other way round.

It was only him that ever really suffered and it was us – Sam, me, Nancy and Elwen [Ivan’s sister and brother] – who gained more than I ever believed possible from having and loving such a wonderfully special and beautiful boy.

David Cameron is a supporter of Britain’s National Health Service. He and his family are deeply grateful for the quality of care Ivan received, and for the support they as a family were offered as his carers. The Camerons were open about their son’s disability in a manner that suggested that old ideas about the disabled best being out of sight and therefore out of mind were on their way out. This was all the more powerful coming from a leader of the Tory Party, which has not been a conspicuous champion for the rights of the vulnerable.

Disability seems to feature more prominently in the British public sphere than in Australia. I was impressed when we first tuned into the BBC children’s television channel here, CBeebies, to find a regular show, Something Special, that features children with disabilities and their families and is designed to serve their needs – while also clearly being popular among children generally. Its presenter, Justin Fletcher, a talented and charismatic performer with an alter ego named Mr Tumble (essentially Justin with a red nose and dressed as a clown), presents the program in sign language, as well as vocally. Children without a hearing impairment are able to pick up a few signs along the way, and the program increases the visibility of children with disabilities while recognising their presence, value and right to a “voice.” Something Special gently draws attention to difference, while also celebrating the common childhood joys of play, language and laughter.

The BBC, however, recently found itself at the centre of a controversy over the very question of disability on television. A new presenter on CBeeebies, twenty-nine year old Cerrie Burnell, has the lower part of one of her arms missing. She was born that way. Her appearance prompted parent complaints on the CBeebies website that she was frightening their children. Some people even claimed that the “politically correct” BBC had only hired her to fulfil some employment quota. So vicious were some of the comments that the BBC apparently decided to remove them from the site. It was perhaps too much to expect that in a nation that gave the world eugenics there would be universal acceptance of this somewhat bold – if hardly revolutionary – decision. (It’s not as if Sesame Street had made a decision that Ernie and Bert were to “come out,” or Humphrey Bear had started wearing trousers.) Cerrie herself responded with the patience and grace that one suspects she has needed fairly often before in similar – if rather less public – circumstances. While admitting that she was upset by the comments, she added: “It can only be a good thing that parents are using me as a chance to talk about disability with their children. It just goes to show how important it is to have positive disabled role models on CBeebies and television in general.” My own daughter seems to like Cerrie and her co-host Alex at least as much as her predecessors, Chris and Pui. The absence of the end of Cerrie’s right arm has not yet emerged as a talking point for her and I suspect that by the time she’s older it will simply be taken for granted.

The public support of Cerrie, including in the pages of the tabloids, was as heartening as the web complaints were disturbing. The whole matter seems to have blown over, although whether it will act as an encouragement or deterrent the next time a TV executive contemplates a similar decision cannot be known. It could go either way, especially in a national broadcaster that has recently found itself in public strife more often than is healthy for it.

Not everyone, moreover, who is disabled, or responsible for the care of a person with a disability, is as satisfied with their treatment by authorities as the Camerons were. Many families complain of having been subjected to insensitive treatment at the hands of doctors and other health professionals, others of inadequate support from government. Carers’ allowances are inadequate, and families in which children are disabled are especially inclined to poverty. The Camerons’ wealth, status and privilege could not protect them from the traumas of their circumstances, but could smooth out quite a few corners and edges that have bruised and cut others placed in similar circumstances. They will not have been forced to hand over their grocery bills to a private charity, for instance, in order to prove that they warranted assistance to buy a wheelchair. They are not dependent on carers’ allowances or disability pensions. But they will possibly have had to tell their story over and over again, to one health professional after another, rather than simply being able to explain it once to a case-manager who could liaise with the vast army of officials and professionals that any family with a disabled member will need to consult. The current government has apparently acted in this area, but so far there has been a large gap between intention and achievement.

In the meantime, it was reported last week that late in 2005 a forty-three year old man suffering from Down’s Syndrome, having been admitted to a London hospital after suffering a stroke that left him unable to swallow, was allowed to die there from malnutrition. The hospital failed to fit him with a feeding tube, so he went for about a month without proper nutrition. The case has received some media publicity, but there has been no high-profile tabloid witchhunt in this case of official incompetence and neglect, nothing of the kind that occurred, for instance, against officials when Baby P was battered to death by his own parents recently. In that case, by the time the tabloids had conducted their vile headline-grabbing witchhunt against those they deemed fit for a lynching – essentially social workers, doctors and local officials – the director of Children’s Services in the local authority, Sharon Shoesmith, was receiving anonymous phone calls suggesting ways in which she might kill herself and being warned by police not to stand too close to the edge of the platform when using the Tube.

Official neglect and premature death are perhaps easier to tolerate when the victim is a forty-three year-old man with an intellectual disability than an innocent child. Although everyone’s life is equally valuable, some, it would appear, are still a little more equally valuable than others. •

Frank Bongiorno teaches in the Menzies Centre for Australian Studies, King’s College London and writes each month for Inside Story.