Books | Are the Big Four auditing companies facing their moment of truth? 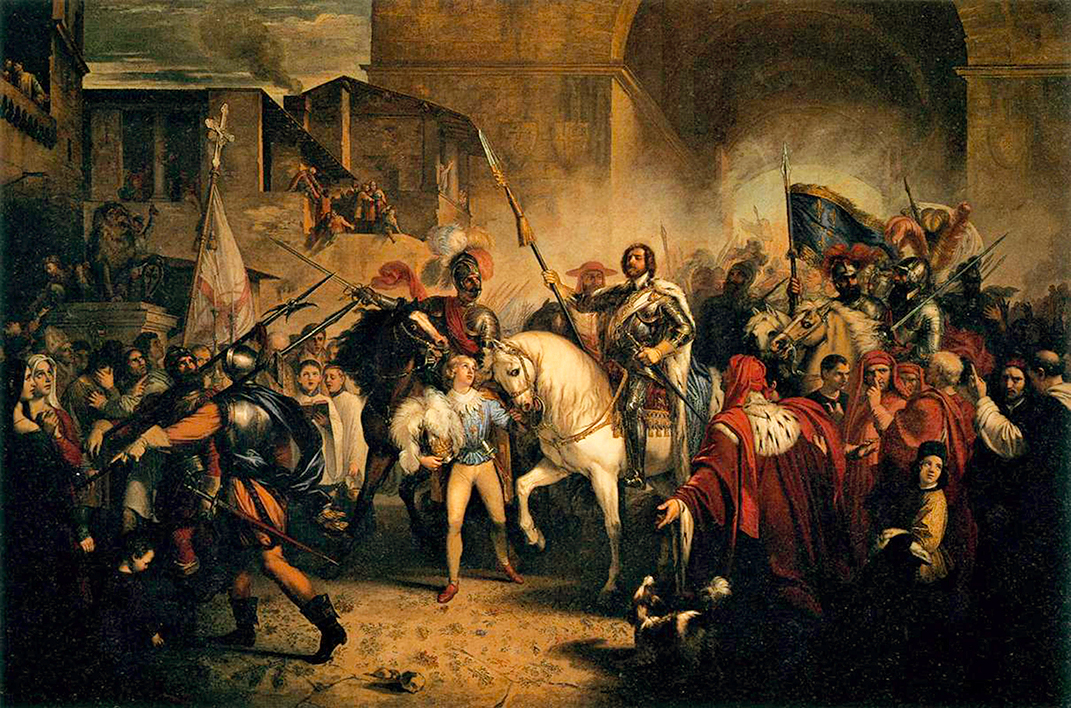 History catches up: the invasion of Italy by Charles VIII of France helped end the Medicis’ run of good fortune. The Picture Art Collection/Alamy

The Big Four: The Curious Past and Perilous Future of the Global Accounting Monopoly
By Ian D. Gow and Stuart Kells | La Trobe University Press | $32.99 | 272 pages

Just like reality TV stars, the Big Four accounting firms like being famous for being famous. With a global brand name you can get your drinks for free behind the velvet rope.

Though no one can remember what the letters actually stand for, KPMG is as instantly recognisable as KFC or KGB. The strangely crenellated acronym PwC might stand for “Pricks with Calculators,” according to its unkind critics, but it is recognised by millions. Deloitte sounds pleasingly French and aristocratic — though the firm’s founder was neither — and for some unknown reason its current logo finishes with a green dot. Ernst & Young — a name that makes the company sound youthful and intense — is now just EY. (Luckily no one in brand management lobbied successfully for a green exclamation mark.)

What the Big Four don’t like is being caught in the act. As the founder of modern accountancy and history’s first great money manager, Giovanni de’ Medici, advised on his deathbed: “Be careful not to attract public attention.” But the Awesome Foursome — which make billions and employ millions — have been filling column inches since the 2008 financial crash with stories of self-inflicted foot wounds. Giovanni would be appalled.

Besides making last year’s Oscars ceremony a global laughing stock, PwC has been having a particularly torrid time. Just this month a US federal judge ordered it to pay over A$850 million in damages to the Federal Deposit Insurance Corporation for failing to pick up the criminal fraud that led to Colonial Bank going belly-up during the 2008 financial crisis.

KPMG is under investigation by Britain’s Financial Reporting Council over its auditing job for drinks company Conviviality, which went into administration soon after it discovered a A$53 million tax bill it hadn’t been expecting. Ernst & Young was the auditor for Lehman Brothers right up until the moment the venerable old firm slipped beneath the waves with the band still playing on deck. Deloitte audited Bear Stearns until it also became an ex-bank.

And now, in Britain, all the members of the famous quartet have been hauled over the coals for their role in the collapse of the construction group Carillion, which is set to cost the British government A$264 million.

Should we be surprised that British MPs have called recently for the Big Four to be broken up, with auditing going one way, advisory services going the other, and ne’er the twain meeting again? And if the regulators don’t get them, might not new technology disrupt them into oblivion?

In this fascinating and thoroughly researched book, Ian Gow and Stuart Kells tell the story of accountancy’s rise and imminent fall. Though they’re experts in finance, the two authors bring a pleasingly anthropological eye to the subject. The Big Four, they inform us, have become “part of the furniture of modern capitalism,” but by the end of their analysis it’s clear that a massive garage sale might be just around the corner.

According to Gow and Kells, the Medicis wrote the original textbook for the profession. Besides counselling discretion, this clan of Renaissance Mafiosi advocated these Golden Rules about the Getting and Keeping of Gold: maintain a close eye on your double-entry bookkeeping; establish a “partner track” to keep everyone loyal and working hard; buddy up to the richest people you can find (popes in the Medicis’ day, big business and governments today); never worry about having a conflict of interest; and lastly, keep very, very quiet about where all the florins are tucked away.

What the Medici family inaugurated, the Big Four perfected; minus, perhaps, the murders. Just like those ruthless Florentines, PwC, Deloitte, EY and KPMG have deployed their expertise in the dark arts of financial legerdemain for fun and profit.

The Big Four is at its best when it’s exposing accountancy’s hidden wild side. In the 1920s, Nicholas Waterhouse — scion of the famous accounting family — might have been a mild-mannered philatelist by day, but at night he threw parties in his Chelsea mansion that were dusted lightly in cocaine and reportedly climaxed in “scenes of open debauch.”

The book’s pre-eminent theme — the drumbeat that holds it all together — is the degradation of the profession over the last several decades. How long can you do time-consuming, low-margin auditing for the same companies that you are doing highly profitable advisory work for, and not be overcome by a conflict of interest? But as that proud muckraker Sinclair Upton once said, “It is difficult to get a man to understand something, when his salary depends on his not understanding it.”

The Medicis eventually failed. Bad decisions, undetected frauds, forces beyond their control (mainly in the form of an invasion of Italy by Charles VIII of France), the desertion of allies — all combined to end their run of great and good fortune. The Big Four, argue Gow and Kells, are facing a similar moment of truth. The forces of disruption are coming for the accountants in the same way they came for the journalists, the travel agents and the purveyors of pornographic magazines.

Artificial intelligence, machine learning and big data will soon, they say, bring forth a world in which “audit bots” crawl all over the accounts and report back in real time — replacing those pesky (and pricey) new graduates. Gow and Kells report that EY, for example, has predicted a possible halving of its junior auditor intake by 2020. And the venerable partners can’t be far behind. “Will accountancy become just a sub-branch if IT?” they ask rhetorically. A thousand Chinese start-ups will bloom. The partner track will run into the sand. The once mighty “thud factor” of thousand-page, million-dollar consultancy reports will no longer be heard in the land.

As the famous dictum — paraphrased from George Bernard Shaw — has it, “All professions are a conspiracy against the laity.” And then, one day, a French king turns up at the city gates, the Pope won’t return your messengers any more, and the laity discover that your services are no longer essential. ●

Interned: a hand-drawn and painted image of Australia bounded by barbed wire, with only the town of Hay marked, given to Werner Hirschfeld by Robert Loewenstein. Werner Hirschfeld collection, Sydney Jewish Museum, M2015/018:010 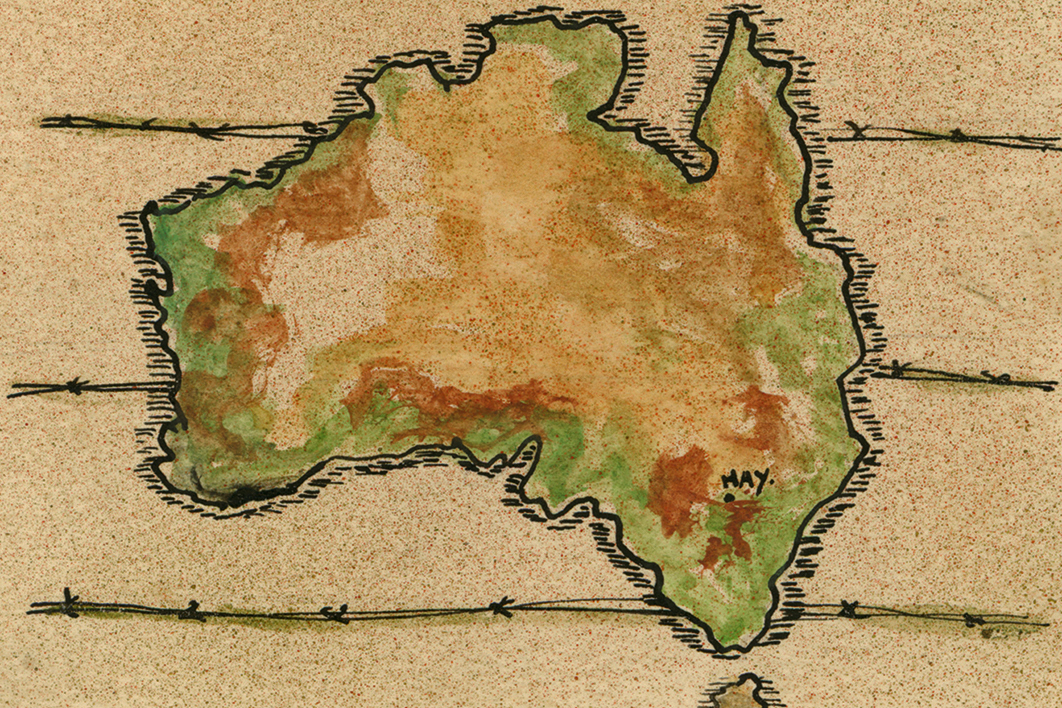 Interned: a hand-drawn and painted image of Australia bounded by barbed wire, with only the town of Hay marked, given to Werner Hirschfeld by Robert Loewenstein. Werner Hirschfeld collection, Sydney Jewish Museum, M2015/018:010